Defending iCare With the Obamaphone — Or Something Like That

Because cable news channels have an infinite vacuum of time that must be filled, it was inevitable that yesterday they would devote some of that time to an as-it-happens experiment in signing up for the Obamacare “exchanges” as they were rolled out.

“We tried in about 20 different states,” said the perky medical reporter. “In 12 of them, we hit glitches. Sometimes, it made it impossible to sign up. There were error messages or that little annoying kind of twirly thing.” The twirly thing the perky anchor hates.

So much for the Travelocity analogy — which the president invoked time and again in explaining how easy it would be to buy health insurance. Yesterday, he invoked a new analogy: “Consider that just a couple of weeks ago, Apple rolled out a new mobile operating system, and within days, they found a glitch, so they fixed it.”

Cue the perky anchor: “This isn’t necessarily like the iPhone, right?”

Replied the perky medical reporter: “Right. My iOS 7 works. I just sent someone an email, it works. This I couldn’t even sign up.”

Of course the “glitches” would have been an even bigger story yesterday were it not for the “partial government shutdown.”

“I find it ironic,” wrote a progressive blogger, “that the Republicans’ effort to stop Obamacare by shutting down the government managed to distract from the bad news stories about Obamacare.” The man has a point…

Well, we’re sure there are many more “bad news stories about Obamacare” to come. Probably around Jan. 1, when still more provisions of the law kick in. If the government websites aren’t ready, at least you can make your own preparations.

On the shutdown front, there’s nothing new to say. The lack of a federal budget looks more and more likely to become mashed up with the debt ceiling drama.

“Extraordinary measures” is another word for “accounting tricks” — such as suspending the daily reinvestment of Treasuries that sit in the Exchange Stabilization Fund, the slush fund the Treasury uses to fiddle with currency exchange rates.

Truth be told, we don’t know for sure what he’ll say this afternoon when he speaks at a conference in St. Louis. But the above — taken word for word from a speech he delivered on Jan. 14 and chronicled in our virtual pages the following day — seems like a reasonable bet.

And why not? It’s a lot easier to call out Congress for its fiscal follies rather than look in the mirror at your own monetary follies.

Two weeks ago today, the Fed opted not to “taper” its quantitative easing/bond buying/money printing program. Furthermore, “there is no taper in sight,” says our Chris Mayer, concurring with Mr. Hunt. “In fact, there are decent odds that if anything, the Fed may actually increase its bond buying.”

Another reason the Fed won’t taper: No one else will step up to buy all those Treasuries.

“The black line,” Chris Mayer explains, “is the total foreign holdings of U.S. Treasuries. You see it’s a steady climb up — except for a dip most recently.” The red bars indicate the month-to-month change. “Look at those negative numbers — that represents selling by foreigners.” 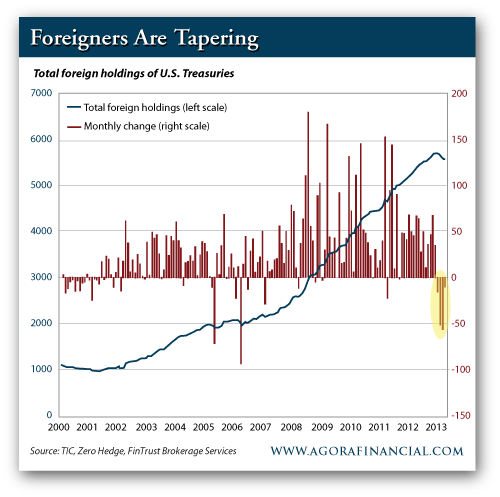 If foreigners aren’t buying, and the Fed slows down its buying, what happens? “Interest rates would jump,” says Chris, “perhaps uncomfortably high. And the Fed can’t have that. It can’t have that because it knows how dependent this economy still is on easy money.” The mere talk of tapering over the summer pushed the 10-year Treasury note from 1.6% to nearly 3% last month.

How to play it? Chris is watching real estate investment trusts (REITs).

REITs got hammered during the summertime taper talk. “The perception is that higher interest rates are not good for real estate prices,” Chris explains, “so REITs fell.”

Some of the REITs hardest hit were those with triple-net exposure. “A triple-net lease is one where the tenant pays the taxes, insurance and maintenance on the property.” The leases are long term and slow to change. So they’re “bond-like” and sensitive to interest rate changes.

Chris is eyeing one of these REITs for his Capital & Crisis readers. “If the Fed won’t taper and if rates are not going anywhere — the Treasury rate currently sits at just 2.65% — then might [this company] also rebound as the market digests this new reality?

“It’s a contrarian play because the consensus is that interest rates are headed higher and people want to avoid interest rate-sensitive stocks. But as any experienced investor will tell you, it’s often the uncomfortable play that pays off the biggest.”

Stocks are sliding, and the financial media are latching onto the notion it’s because the shutdown will be “longer than expected,” heh…

At last check, the major indexes were all down at least a half percent. The Dow sits at 15,061, the S&P at 1,682. “The broad market is at an important juncture,” writes Greg Guenthner in today’s Rude Awakening. “Buyers will need to step in soon if we’re going to kick-start a fourth-quarter rally. But right now they’re nowhere in sight.”

With the shutdown likely scotching the Labor Department’s monthly jobs report Friday, today’s report from the payroll firm ADP takes on a little extra cachet. It says the private sector added 166,000 jobs in September. Bleah — it’s less than the “expert consensus” was counting on. Double bleah — August’s numbers were revised down.

Scared money is running into Treasuries, with the rate on the 10-year note falling to 2.6% for the first time in nearly two months.

Scared money is also running back into precious metals. Gold reclaimed $1,300 this morning as quickly as it surrendered that level yesterday.

Gold’s rise coincided with the dollar’s fall. The dollar index has slipped below 80 for the first time since early February.

As of yesterday, you can buy gold in Texas, in any amount, without paying sales tax. “It is the first time,” Mineweb reports, “that a state has expanded an existing sales tax exemption for gold and silver.”

Before the new law took effect, Texans had to pay a 6.25% sales tax on all precious metals purchases under $1,000. Not exactly conducive to dollar-cost averaging in small amounts…

Louisiana repealed its sales tax on gold earlier this year, and Utah in 2011.

Mr. Nacchio — the ex-CEO of the telecom company Qwest — was sprung from prison 12 days ago. He did 4½ for the victimless crime of insider trading. But his real crime might have been standing up to the NSA.

Way back in February 2001, the NSA approached the big telecoms about taking part in a warrantless surveillance program. He refused.

“His narrative,” The Washington Post reports, “matches with the warrantless surveillance program reported by USA Today in 2006, which noted Qwest as the lone holdout from the program, hounded by the agency with hints that their refusal ‘might affect its ability to get future classified work with the government.'”

The judge in Nacchio’s case blocked the defense from broaching this subject — because the evidence to support it was classified.

After the Snowden revelations, Nacchio tells The Wall Street Journal, “I feel vindicated. I never broke the law, and I never will.”

“Perhaps I’m just a conspiracy theorist,” writes ex-Wall Streeter Michael Krieger at his Liberty Blitzkrieg site, “but I find it quite coincidental that a country which lets Jon Corzine off the hook, a country where not a single CEO or executive of a financial institution was indicted with regard to the 2008 crisis, a country where James Clapper lies to Congress about the NSA and faces zero repercussions; that in such a country the only major corporate CEO to go to jail for financial crimes is the one that refused to play ball with the NSA.”

“The reason the planes are full is because there are fewer of them,” begins today’s mailbag. Our correspondent wishes to counter the reader who wrote in Monday to suggest full planes are an indicator of relative economic health.

“My reference is the FAA Administrator’s Fact Books. The numbers that best resemble what we’re looking for are under the Air Traffic heading, ‘Aircraft Operations Logged by FAA Towers,’ air carrier plus air taxi annual counts in particular. Those two categories represent your passenger planes and cargo craft.

“If you look through the in-between years, you will find a general decrease in flights for these categories. If you read deeper into the latest book, you will notice passenger numbers are increasing slightly as flights decline. The only explanations I have for this are 1) They are packing the planes tighter by giving away spare seats and 2) There is possibly less air freight and more passenger traffic.

“How about a giant ‘recall’ vote,” writes a reader fed up with the shutdown circus, “and throw ALL the bums out.

“We the people will then tie the Congress’ pay to whether they accomplish ANYTHING. NO accomplishment — NO pay!”

The 5: Careful, there. What exactly is it you want them to “accomplish”?

“Penalties,” a reader writes, carrying on an Obamacare thread this week, “sound like a ‘cheap’ alternative to buying insurance until you unexpectedly find yourself in the hospital for a few days.

“Insurance is expensive, but tagged with a hospital stay of several days, lab work and so on and on, it’ll all add up very fast. Hi, doctor!… IOU. Decisions, decisions. Stay in your house, never go out, don’t drive, don’t do anything risky.”

The 5: We hear you. But it doesn’t have to be quite so dire. For as much as Obamacare limits choice, you still have choices available. You just have to look a little harder for them.

Alternatively, you can examine our special report The Obamacare Antidote: 6 Ways to Get the Best Health Care of Your Life and Save up to $2,000 per Year. If you’ve seen the offer before and put it off, we gently suggest the headlines of the last two days make matters a little more urgent.

P.S. The aforementioned report is packed with practical steps you can follow to navigate the transition to Obamacare. Already, we’ve heard from one satisfied reader who saved 71% off the cost of a blood test, following the report’s guidance.

Another writes: “I just read the Obamacare Antidote report and wanted to thank you for such a comprehensive report on how to sidestep the Obamacare mess. There are so many ideas in the report, which I will put to use and tell friends and family about.”

We urge you to get a copy for yourself while there’s still time to act. Here’s where to go.