Whose Side Are They On?

“This time, I think Wall Street should be concerned,” said the president to CNBC, eyeing the debt ceiling deadline two weeks from today.

The president seldom says much in public about the stock market. In fact, the last time we recall was early in his term when he said, “What you’re now seeing is profit and earning ratios are starting to get to the point where buying stocks is a potentially good deal if you’ve got a long-term perspective on it.”

Hmmm… We’re working with a teensy data set of presidential pronouncements here… but maybe Wall Street should be concerned.

We see the president is trying to amplify his message with that from other “distinguished” Americans.

“This seriously damages our ability to protect the safety and security of this nation,” adds Director of National Intelligence James Clapper.

Considering the contempt a large swathe of the country has for the banks and the national security state, the White House might want to find some different people to help bring ordinary Americans “on side.” 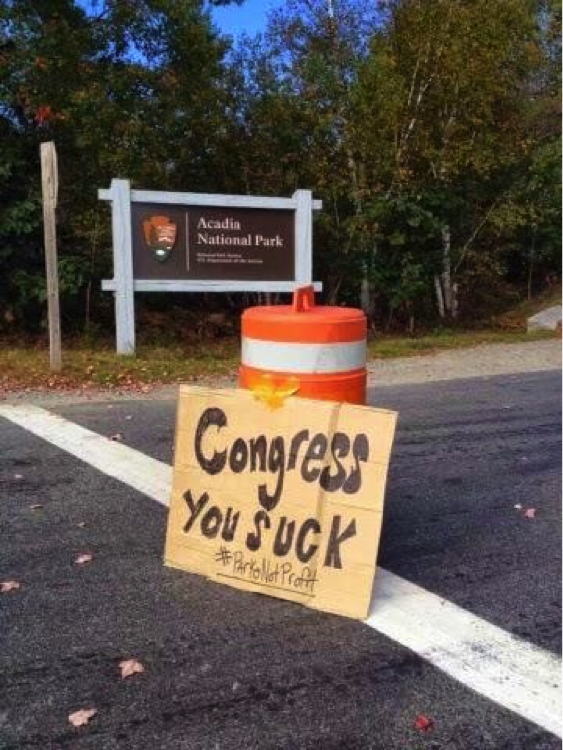 “It was worse today than it was yesterday,” said Iowa resident Denise Rathman as she tried to sign up for insurance at healthcare.gov. This was yesterday she said that, we hasten to add.

“The pressure is on,” reports the Associated Press, “for the federal government and states running their own health insurance exchanges to get the systems up and running after overloaded websites and jammed phone lines frustrated consumers for a second day as they tried to sign up for coverage using the new marketplaces.”

Maybe there’d have been a different result if they’d put more effort into the website and phone lines… and less effort into publicity stunts? 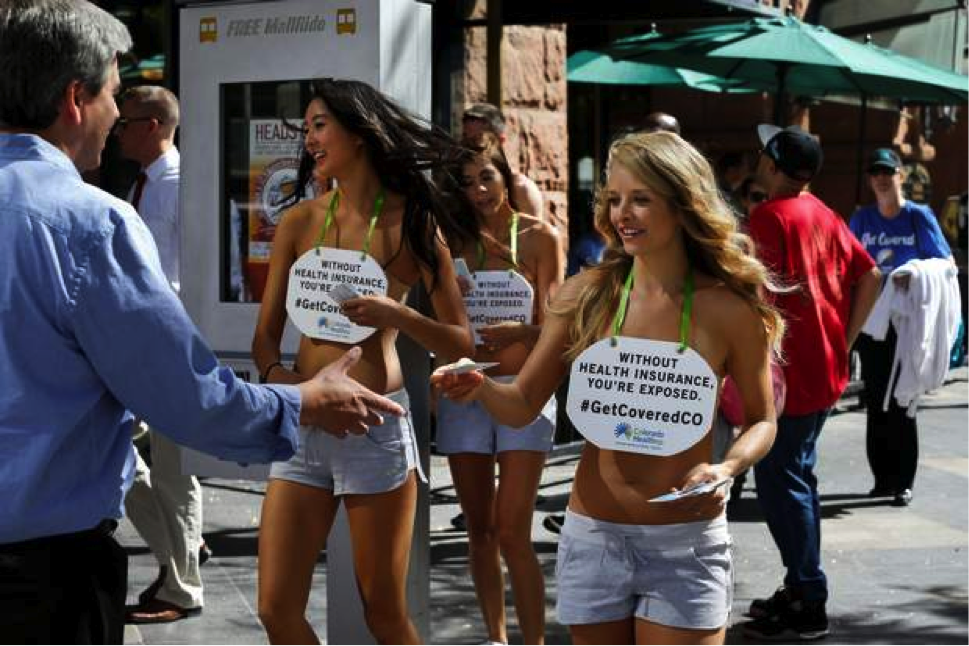 Fortunately for these models, Denver’s fickle October weather was nice on Tuesday…

The glitches are a mere symptom of a devastating disease. As we’ve been saying for weeks now, Obamacare has been essentially set up to fail. “Like a flat rock you step on in a swiftly moving stream,” says our friend Jud Anglin, “it’s a means to an end.

“The ultimate objective is a full, 100% government takeover of the entire health care industry.

And when that happens — which I believe will be in the next 18-24 months — we’ll experience a way worse system than what’s coming with Obamacare.”

Jud has spent a decade helping people work around the vagaries of the U.S. health care system. He and our research team have poured 1,000 hours and $100,000 into a comprehensive plan to help you “opt out” of Obamacare… and whatever comes after. Here’s where to get started.

We have developments both sobering and surreal in the cyberwars today.

The commander of Iran’s Cyber War Headquarters has been killed under, to say the least, mysterious circumstances.

By one account, assassins on motorcycles took out Mojtaba Ahmadi. That’s according to a website linked to the Iranian Revolutionary Guard. But the Guard itself denies this account to Reuters, saying only that he died in a “horrific incident.”

Here’s what we do know…

Meanwhile, the departing commander of U.S. forces in Korea is urging South Korea to amp up its cyberwar capabilities.

According to an Associated Press report, Gen. James Thurman “told reporters he is most worried about the South’s abilities to face asymmetric threats from the North, including cyberattacks and long-range ballistic missiles and artillery.”

Artillery? Yeah, we can buy that: Seoul, a city of more than 10 million, lies only 35 miles from the DMZ.

But cyber? Seriously? After the North put out this propaganda photo last spring to try to intimidate Washington? 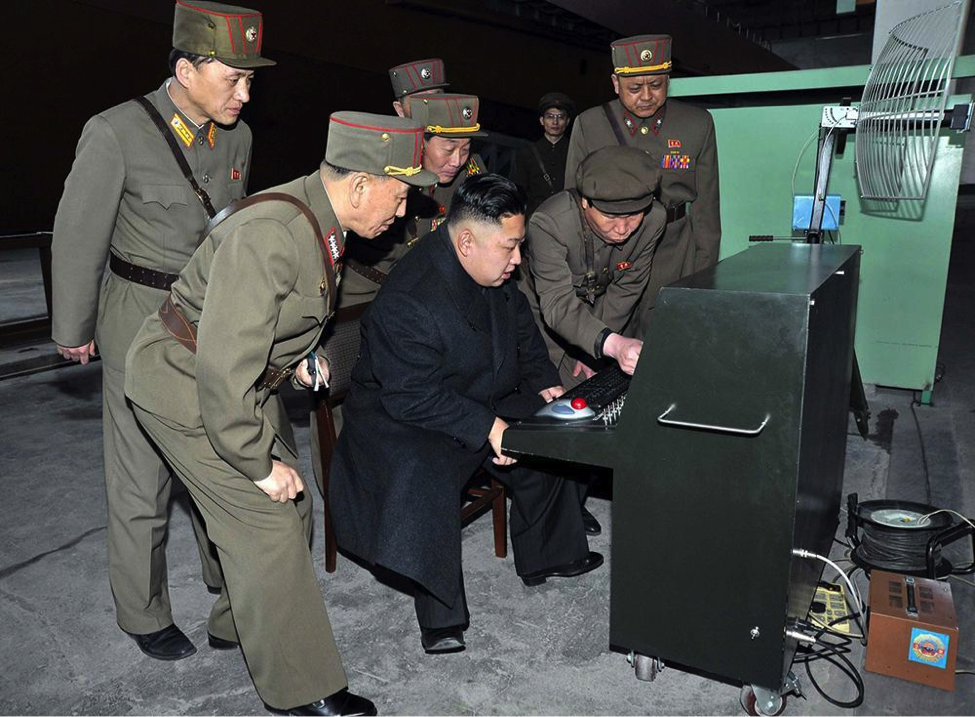 Well… whether the threats are real or imagined, the Pentagon is set to unleash a $23 billion torrent of money on the cybersecurity space, starting only 12 days from now. For the inside track to which companies are most likely to flourish, check out the details behind “Presidential Policy Directive 20.”

Gold is gamely holding onto its gains yesterday, the bid $1,317 at last check.

The dollar index is slipping further below 80. As we write, it’s approaching 79.7.

Credit goes, in part, to euro strength; the Esperanto currency pushed above $1.36 this morning — in part a relief rally after Italy’s government survived a no-confidence vote.

China’s central bank just made it easier for Chinese businesses and individuals to load up on gold.

A draft document on the People’s Bank of China website reveals plans to increase the number of firms allowed to import and export gold. In addition, ordinary folks will be allowed to bring up to 7 ounces of gold into China from overseas without having to pay a duty or even report it to customs.

No word on how soon the new rules might take effect; touchingly, the central bank is following the cue of U.S. regulators and allowing a “public comment” period that runs through Oct. 29.

Meanwhile, new figures from Thomson Reuters GFMS reveal the spot trade in gold on the Shanghai Gold Exchange more than doubled in the first half of 2013.

Yes, China’s big gold move is still under way… and it’s not too late to profit from it.

“Couldn’t agree more,” a reader writes, “with your caution back to the reader to be careful what you want Congress to accomplish.

“As much as we all moan and complain about our government, it is this kind of attitude from us that drives more regulations, which requires more departments of regulators and bureaucrats to administer, which leads ultimately to the huge complex beast of a government we all complain about so frequently in these pages.

“I was on a ‘town hall’ conference call with my state representative recently when she was mentioning how many bills she had sponsored during her first term. I told her that was going to cost her my vote in the future. In short, she was confused but then asked why she would lose my vote even if it was ‘worthy’ legislation.

“I simply asked if she was for smaller government (I knew this was her position from previous meetings). She immediately confirmed she was definitely for smaller government. I asked her to name a single bill she wrote or sponsored that would not add more complexity, costs and or people to administer. To her credit, she tried, but the best she was able to do was to estimate that some would have a neutral impact.

“I said I knew her heart was in the right place, but that passing legislation is antithetical to reducing the size of government, unless it is to defund or dismantle existing legislation.”

“I am a registered Democrat and do not like it when Agora becomes mixed in political mudslinging,” a reader writes in response to an email we sent this week about Obamacare.

“Remember, at least half of your subscriber base are Democrats. Please do not hit me with this Republican trash.”

“If you believe you can defend a health care system that is No. 1 in the world in expense and No. 38 in the quality of care received, go ahead,” writes another in reply to the same email. “I think you’re better than that.

“Remember that it was the House of Representatives that gutted the original plan, hoping to guarantee its failure and, when passed into law and ratified after every subsequent challenge, said Congress revealed their character as a collective of petulant, spoiled, pouting brats.”

The 5: Where, o where, have we ever defended the pre-Obamacare health system? On the contrary, our fearless leader Addison Wiggin has described in excruciating detail the cost-shifting scams that amount to yet another instance of the middle class being “extracted” for the benefit of special interests.

As for the D-versus-R stuff, we couldn’t care less. What we do care about is how the Affordable Care Act is going to change your life, and how you should prepare accordingly. Practical advice. Take it or leave it. Of course, you leave it at your own risk.

“So I ‘read,’ not ‘listened to,’ your Obamacare report,” writes our correspondent in Malaysia — who, we might add, gets it.

“From the example of the thyroid test as described, it appears to me that Obamacare is not the fatal flaw in the U.S. medical system (although it does seem like a patchwork solution covering a bad problem), but rather the underlying medical system wherein the normal medical/lab costs are overly padded.

“So perhaps the boogeyman here is the U.S. medical system, and Obamacare is the manifestation of that boogeyman. Fix the medical system and a better insurance scheme may emerge.

“Cheers from a recent recovery from gall bladder removal surgery (five-day hospital suite… yes, suite, where my wife stayed with me for the entire time) for less than $4,000 (covered by insurance).

“P.S. Interesting side note… my spell-checker (Thunderbird client) suggests ‘Obamacare’ be replaced with ‘macabre.’ How scary is that?”

The aforementioned Jud Anglin, our in-house expert on Obamacare, is a pioneer in the “medical tourism” trade — lining up Americans with overseas doctors and hospitals for affordable treatments and surgery, without sacrificing quality of care.

The good news is that Jud’s research has uncovered ways to get high-quality care, without paying through the nose, without leaving the United States. He shares the full story here.

P.S. We’re looking for more readers to follow Agora Financial on Google+. If you sign up here, you’ll get a free report right away: How to Gain Big Dividends From Little-Known Banks.