“America has come a long way since 1973,” Time magazine said yesterday. “The U.S. is an energy superpower today.”

Cause for celebration, right? The president doesn’t want to hear about it.

As we write, he’s prattling about how the shutdown-debt ceiling mashup — now in pause for three months — inflicted “completely unnecessary damage” on the U.S. economy.

Of course, the president, like the rest of the Beltway class, is obsessed with GDP as a measure of economic health. Government spending is one of GDP’s four components. Less government spending equals less GDP.

But as we’ve taken pains to point out, the rest of the country has kept on truckin’ the last 16 days — waking up, going to work, creating, achieving. And the achievements in America’s shale energy patch have opened up a lucrative play — with a brief window of opportunity.

Forty years ago this week, OPEC imposed its infamous oil embargo on the United States — retaliation for Washington backing Israel against Egypt and Syria in the 1973 Yom Kippur War.

Oil prices leaped from less than $4 a barrel to more than $12. U.S. production had peaked in 1970; crude imports had doubled by 1975. Gas lines, the 55-mile-an-hour speed limit… You remember all that.

Still, the most dramatic impact of shale energy has been on the natural gas market. The U.S. price has cratered from $13 per thousand cubic feet in 2008 to below $4 today. The rest of the world pays prices up to four times as high as we do.

We’ve been hammering away at the resulting investment possibility all week; if you need to get caught up, we direct you to Tuesday’s episode. But do so now, because we’re mere hours away from Agora Financial’s first live online event — in which we spell out the details.

To recap: Four companies have already secured federal permission to export $4 American gas to Europeans and Asians accustomed to paying as much as $16. When Dominion Resources won such approval last month, you could have played it for 193% gains in 48 hours. We know an energy industry insider who’s convinced two or three more approvals are on the way… and he’s pinpointing the likely winners.

Reuters has now confirmed this thesis: “This speed at which the latest approval was reached — just five weeks after the previous project — puts the Department of Energy on a potential pace to rule on several more projects before year’s end.” And now that the shutdown is over, the bureaucratic wheels are returning to full speed. We urge you to join us for the full story — including a comprehensive briefing from our insider, plus reader Q&A — tonight at 6:00 p.m. EDT. If you can’t make it, we’ll replay the event at 9:00 p.m. EDT.

It costs nothing to take part; all you need to do is sign up in advance. Here’s where to do so.

“The fundamental situation that the debt growth rate significantly outpaces that of fiscal income and gross domestic product remains unchanged,” reads the report from China.

The syntax is a little mangled, but once again, the Chinese are making more sense of events in Washington than anyone in Washington. After the faux resolution to the faux budget crisis overnight, the Chinese rating agency Dagong downgraded U.S. Treasury debt. Again. From A to A-minus.

We’ve been following Dagong ever since it began rating sovereign debt more than three years ago. The outfit never did give Uncle Sam’s sorry rear end a AAA rating. It started at AA and has been downhill ever since.

“Goose egg, nothing, we got nothing,” Rep. Thomas Massie (R-Ky.) told The New York Times.

Mr. Massie was among the Republican freshmen hoping to “defund” Obamacare when the budget melodrama began at the start of October. Alas, “the deal emerging from [the battle] made no major change to the health law and contained no new deficit-reduction measures,” reports The Wall Street Journal.

The outcome was foreordained, but along the way, there was some excitement during the roll call late last night as a House stenographer decided to take to the microphone. 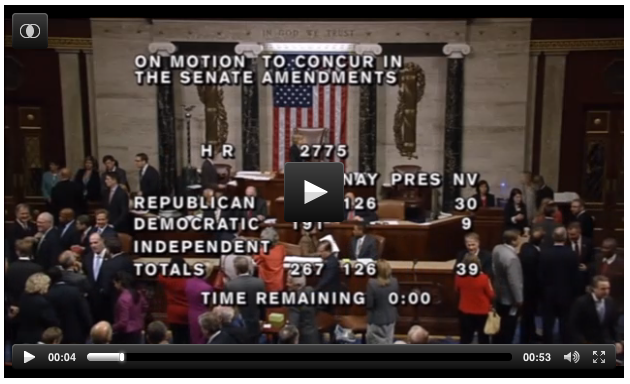 The rant was amusing. This is not: She was “interviewed” by Capitol Police and hauled away to a hospital for a mental health evaluation.

Now we can look forward to a rerun of the entire farce three months from now. Here’s what the new law sets in motion…

Along the way, we’ll have some year-end excitement no one’s caught onto yet: Extended unemployment benefits — the straight-up welfare program that kicks in after the 26 weeks of insurance runs out — expire on Dec. 31.

Who knows what other issues might get sucked into that?

Earnings season has been underway the last nine days. “Expectations are low — just as they were in the second quarter,” Greg writes in this morning’s Rude Awakening. “Thanks to crappy performance over the summer, analysts have already braced investors for a bad trip…

“The revisions are startling. Analysts were expecting to see third-quarter earnings for the S&P 500 rise to 5.1% growth as recently as this summer, according to MarketWatch. As of today, the consensus is 1.4% growth.

“Once again, they’ve set the bar low enough to take a lot of the worry of huge misses out of earnings season. Rocky financial performance probably won’t derail stocks this quarter.”

“In fact,” says Greg, “I’m guessing sold-out bulls will fight hard to get back into stocks.

“Mutual funds still can’t seem to catch their benchmarks. While third-quarter performance was a little better, it’s important to realize these fund managers are fighting for their jobs…

“This isn’t some fairy tale I’m concocting out of thin air. It’s just how the market works. Big money will chase what works into the end of the year. Look for tech stocks to ramp higher along with other outperforming sectors.”

After a big run-up yesterday anticipating a deal in Washington, most of the major U.S. stock indexes are flat this morning.

The exception: The Dow, down nearly a half percent, to 15,300. After the close yesterday, Dow component IBM delivered an earnings “beat” that fooled no one; Big Blue is down nearly 6% as we write.

While the machinery of the federal bureaucracy creaks back to life, traders have two numbers to chew on this morning, unaffected by the shutdown:

“Praise for you this time,” a reader writes in our defense after another reader took us to task yesterday for “applauding” China’s downer drumbeat about the dollar.

“Please keep the China/reserve currency info coming. Besides being of global importance, I also find it to be the most consistently entertaining of your current subjects.”

“I’ve said it before,” a reader checks in, “and I repeat: We the people have let this country come to be run by professional politicians, and politicians are, by definition, liars and very often crooks.

“We deserve what we have gotten as a result. No president and no member of Congress should be allowed to serve more than one term. Period!!”

“For years,” chimes in a second, “I have been in favor of a single-term limit for every political office. I don’t care if you are Abe Lincoln. If you are that good, we will re-elect you the next time you are eligible. The phrase ‘professional politician’ should disappear forever.

“Of course, political power is built on longevity in office. There is no real hope for my crusade, except from the voters themselves.”

“I couldn’t agree more,” echoes a third, “with yesterday’s reader who wrote, ‘We keep re-electing the idiots!’ We are all part to blame if we do keep any of these idiots in office now and don’t vote them out.

“There is no chance of a term limits. We will, unfortunately, have to hope the masses don’t re-elect the current incumbents. I have my doubts.”

“I have a better idea,” a third writes on the suggestion of term limits — “one I’ve advocated for a long time and been scoffed at: public funding of all federal elections.

“The major objection I always hear is how expensive to the taxpayer it would be. Really? How about all the special-interest legislation that gets passed now because our ‘elected’ officials are beholden to those that bought them and paid for their election.

“I think we would have far better, more responsive, responsible government if our elected officials were beholden to no one but we the people. They wouldn’t have to start their first day after election raising money for their next election; they might be able to focus on the true needs of the nation instead of their donors’ ‘needs.’ And when it came around to re-election, they would have no advantage over a challenger(s). If they have displeased their true constituents, they could not hide behind the power of money.”

The 5: We have an even better suggestion to keep influential players from buying politicians: Slash the power of government to pick winners and losers in the first place.

Alas, term limits stand a better chance than that…

P.S. Final reminder: Our live and exclusive online event — cluing you in to a chance to triple your money in 48 hours between now and year-end on the back of America’s new energy boom — is tonight at 6:00 p.m. EDT.

We’ll keep the sign-up page open right up until then… so take advantage and secure your spot right now.