Your tax dollars at work, Part 1: The shoe is on Sen. Dianne Feinstein’s other foot.

On the Senate floor this morning, she thundered that the CIA has violated the law… violated the Fourth Amendment right against unreasonable search and seizure… and violated an executive order forbidding the CIA from conducting domestic surveillance.

Seems the agency removed documents from computers used by staff on the Senate Intelligence Committee — which she chairs.

In other words, it’s a turf war. A falling-out among thieves.

When it’s you and me the feds are spying on, Feinstein’s all for that. From the beginning of the Edward Snowden leaks, the NSA hoovering up information about whom you call and when, Feinstein has railed about “the importance of using telephone metadata to rapidly identify possible terrorist plots.”

Never mind that “the bigger you build the haystack, the harder it is to find the needle,” as journalist James Bamford, author of four books about the NSA, pithily put it. If the billions the feds spend on metadata collection is so effective, why didn’t it stop the Boston Marathon bombing?

It’s the world of the powerful; you just pay taxes in it.

Your tax dollars at work, Part 2: Why can’t your money buy this kind of influence?

Yesterday’s New York Times had some jaw-dropping background about the hedge fund manager Bill Ackman and his storied attempt to take down the dietary supplement company Herbalife.

Ackman had bet nearly a billion dollars shorting Herbalife stock, betting on the firm’s collapse. But to “hedge” his bets, he spent $264,000 on lobbyists last year to make his case against the firm.

And that’s not all: From the Times’ account of a steak dinner in Manhattan last June: “Mr. Ackman told his dinner companions that Rep. Linda T. Sanchez, Democrat of California, had sent a letter to the Federal Trade Commission the previous day calling for an investigation of the company.

“The commission had not yet stamped the letter as received, nor had it been made public. But Mr. Ackman, who had personally lobbied Ms. Sanchez and stood to profit if the company’s stock dropped as a result of the call for an inquiry, already knew what it said, and read from a copy of it that he had on his cellphone.

“When Ms. Sanchez’s office ultimately issued a news release a month later, it was backdated as though it had been made public the day before Mr. Ackman’s dinner talk.”

So far, Ackman’s influence has been for naught: Since June, Herbalife stock has zoomed from $45 to $65. But that’s not the point. This is: Ackman has pull with “policymakers” you don’t, despite the hard-earned money you send to Washington, D.C.

It’s the world of the powerful; you just pay taxes in it.

“Dozens and dozens of tax loopholes exist,” says Laissez Faire Letter researcher Gale Dent. “Some small enough to save you hundreds each year. And some large enough to drive a Greyhound bus through.” For instance…

With April 15 looming, you can’t afford to be without the 97 tips and tricks — every one of them above-board — compiled in Gale’s special report The Vanishing Point: How to Disappear From the IRS This Tax Season and Save a Boatload of Money in the Process. Learn how to get your free copy at this link.]

“Carnage” says the instant message from Rude Awakening editor Greg Guenthner, assessing the biggest move in the markets this morning. 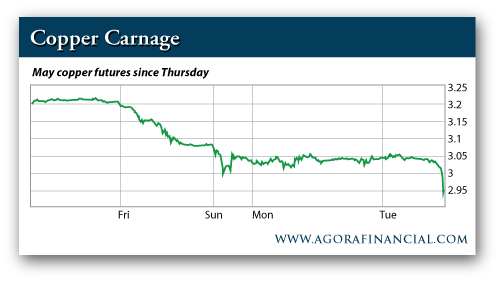 If you want a facile explanation, the media have stepped up with China — which accounts for 40% of global demand. Last week, China experienced its first corporate bond default. It was little surprise; indeed, it was long overdue. But now the fear is of a spillover effect into a web of copper finance deals, many of which are tied up in the “shadow banking sector” we’ve warned about in recent weeks.

If you want the pulse of China’s economy, there’s no better place to look than the “Li Keqiang Index.”

Longtime readers will recall when WikiLeaks disclosed a batch of State Department cables in late 2010, one of the most intriguing dealt with Chinese economic statistics. Li Keqiang — then the Communist Party chief and now premier — supposedly said China’s GDP figures were “for reference only.”

If he really wanted the pulse of the economy, he looked at only three things — electricity consumption, rail cargoes and bank lending. Wonkish types then set to work creating a “Li Keqiang Index” comprising these three elements… 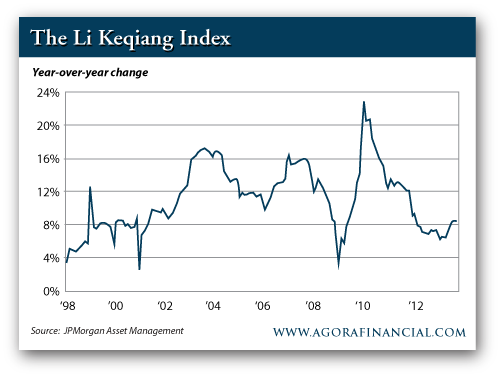 Not great, but not awful. Of course, then there’s the question of whether the figures that go into the Li Keqiang Index are any more credible than those from the Bureau of Labor Statistics here in the U.S. Heh…

For a second day running, stocks are a snooze. The major indexes are barely changed from yesterday’s close.

“The market is near the top of its trading range and might need more time to rest,” says the aforementioned Greg Guenthner.

But the crash talk persists, not least because of crazy short-term returns that make Netflix and Tesla look like pikers: “I still see huge moves in different groups of stocks nearly every single day. This week, fuel cell names have caught fire. Plug Power Inc. (NASDAQ:PLUG), a company most investors considered to be a complete joke until a couple weeks ago, has rocketed from $4 to more than $10 — in six freakin’ trading days.

“While PLUG is one of the more outrageous examples, there are plenty of other big moves popping up in strange corners of the market every day.

“Will these gains last? Probably not. But will these big moves eventually drag down the broad market? I’m not seeing any evidence of that occurring just yet.”

Small-business owners turned decidedly gloomy in February. The Optimism Index put out by the National Federation of Independent Business slipped from 94.1 to 91.4. That’s the lowest reading in nearly a year.

In January, 12% of the survey’s respondents said they planned to add positions; in February that collapsed to 7%.

“Cyber, in my modest opinion, will soon be revealed to be the biggest revolution in warfare, more than gunpowder and the utilization of air power in the last century,” says Israeli Maj. Gen. Aviv Kochavi.

The general spoke last month during a conference of Institute for National Security Studies in Tel Aviv.

We can’t say as we’re surprised, given Israel’s role along with the U.S. in the Stuxnet virus that crippled Iran’s nuclear centrifuges. And as we noticed last fall, Israel is on the receiving end of cyberattacks too; hackers got into the security cameras of a toll road in Haifa, setting off an eight-hour traffic jam.

“This issue is assuming greater importance for Israel by the day,” reports UPI, “as its military undergoes a revolutionary shift in doctrine and organization under the 2014-19 spending plan that is sharply downsizing combat forces, eliminating armor and air force formations, to develop a more agile capability focused on tactical interconnectivity and interoperability through digital systems.”

Further confirmation that the “fifth domain of warfare” is where an exponentially growing flow of defense dollars will flow. As a reminder, Byron King’s presentation on the resulting investment opportunities will come offline Thursday at midnight. Seize the moment — and the profit potential — at this link.

“Gold, Fort Knox?” a reader writes, carrying on a discussion from yesterday. “Joke’s on you, Goldfinger! So how do like them apples, Ms. Pussy Galore?

“Well, this makes about as much sense as anything else I’ve seen (in The 5 and otherwise), except for the lying bastards of D.C. part…”

“Are those islands in the East China Sea still an issue?” a reader inquires. “They have been under Japan’s control for a while. If China takes them, what will USA do? Impose sanctions on China?

“If Russia takes Ukraine? Then will more trading sanctions be applied to Russia?

“What will happen if the West stops trading with Russia and China? Over tiny little land masses that don’t matter a bit and are not anywhere close to the U.S. landmass?”

The 5: Sanctions? Heck, the U.S. is obligated by treaty to go to war on Japan’s behalf.

Back in 2010, the Obama administration decided to leave the Senkaku Islands out of that commitment. But then China and Japan got into a tussle over exports of rare-earth minerals — thoroughly chronicled in our virtual pages — and the White House changed its mind.

As for “the West” ceasing trade with Russia and China, the Europeans are already proving far more reluctant than Washington. So much for a “united front”…

“I hate to make this comparison,” writes our final contributor, “and sadly, our current politicians spend money like there is no tomorrow. No day of reckoning on their horizon.

“I allude to Ronald Reagan’s policies and how he bankrupted the former USSR with an arms race aka the Cold War. Our politicians need to understand the ‘well is dry’ and we can just no longer be the world’s police force, among other things. This reckless spending and support of troops, for all over the world, for such matters, is ludicrous, I hate to say.

“Putin is going to do what he is doing and basically snub his nose at the U.S. and Europe. This old KGB guy would love to turn the tide on the U.S. and our allies and make us all go bankrupt. Similar to what happened with the USSR breakup. Not that it appears we need any help on these spending matters.

“When interest rates go up and the cost of carrying our debts becomes so burdensome, there will be a day of reckoning. Oh, wait, I sound like what The 5 has been saying for years. “Gilda Radner-style from SNL, ‘Never mind.’

“Thanks as always for an interesting read.”

The 5: We’re not sure if Putin actively wants to “make us all go bankrupt”… but if that’s what it takes to defend what he sees as Russia’s frontiers, he won’t hesitate trying…

Random question: If identity theft and similar issues are plaguing the Obamacare website, what guarantees do we have the IRS is any better?

We’ll have to ponder that question some other time. Right now, we once again direct your attention to 97 tips that can slash your tax bill in the coming weeks. If you’ve already filed, heck, you might find so much valuable information you’ll want to file an amended return. Check it out.