The End of Saudi Arabia

Object lesson on the first trading day of 2016: A major global stock index doesn’t plunge 7% because of one weak economic number.
That’s what the facile mainstream headlines would have you believe. From a Wall Street Journal alert on your editor’s iPad: “Dow industrials tumble 343 points after open, following China market’s 7% drop on weak economic data.”
Yes, China’s Caixin/Markit purchasing managers index slipped to 48.2 for December; 50 is the dividing line between a growing factory sector and a shrinking one. That’s 10 straight months Chinese manufacturing has been contracting.
But the real problem goes back to the Chinese government’s attempts to “manage” a market swoon last summer…

[Urgent note: In light of the China-fueled market turmoil, Jim Rickards’ most recent video message — recorded late last year — is eerily prescient.
It’s one of three he recorded during 2015. The other two signaled major market moves… and now the third wave is underway. There’s still time to act… but the window of opportunity is closing quickly. Click here to access Jim’s message right away.]

It being the first business day of the month, we’re also getting a read on manufacturing in the United States… and like the Chinese one, it’s ugly.
Here too, 50 marks the dividing line between expansion and contraction. The ISM manufacturing index for December clocked in at 48.2. That’s two straight months of contraction.
The number is lower than the most pessimistic guess among dozens of economists polled by Bloomberg. And it’s the weakest reading since July 2009, the first month of “recovery” from the so-called Great Recession.

But bonds are rallying, the 10-year Treasury yield at 2.21%. Gold is rallying too, up $16 at $1,077.
Bucking the stock market selling is Smith & Wesson (SWHC) — up 7% at last check on word President Obama is preparing some sort of executive order on gun control. Well, you heard it here first.

At long last, crude is rallying on the proverbial “tension in the Middle East”… which brings us to our first big forecast for 2016.
For most of the last 18 months, nothing in the Middle East could move the oil price up — not ISIS capturing major Iraqi cities, not Russian intervention in the Syrian civil war, nothing.
But today, West Texas Intermediate is up more than 3% as we write, at $38.17… thanks to news we first warned you about a year ago.
Over the weekend, Saudi Arabia’s Sunni Muslim government beheaded a revered Shia Muslim cleric, Sheikh Nimr Baqir al-Nimr — in the process inflaming a nearly 1,400-year-old rift in Islam.
Even by Saudi Arabia’s hard-ass standards, the criminal charges against al-Nimr were extreme — “waging war on God” and “aiding terrorists.” Al-Nimr’s supporters say all he did was lead a nonviolent movement supporting Shia rights and more rights for women.
[Editorial aside: You had to read carefully to learn the method by which al-Nimr was executed. “Nimr beheaded” has a mere 52,800 hits on Google News, mostly from foreign sources.
“Nimr executed,” on the other hand, gets 637,000 hits, including most of the mainstream U.S. sources. Can’t have the rubes wondering how much daylight there really is between America’s wonderful Saudi “allies” and the likes of ISIS…]
So far, the strongest reaction has been in Shia-dominated Iran — where protesters attacked the Saudi embassy in Tehran. In response, Saudi Arabia and several other Sunni-ruled countries have cut diplomatic ties with Iran. 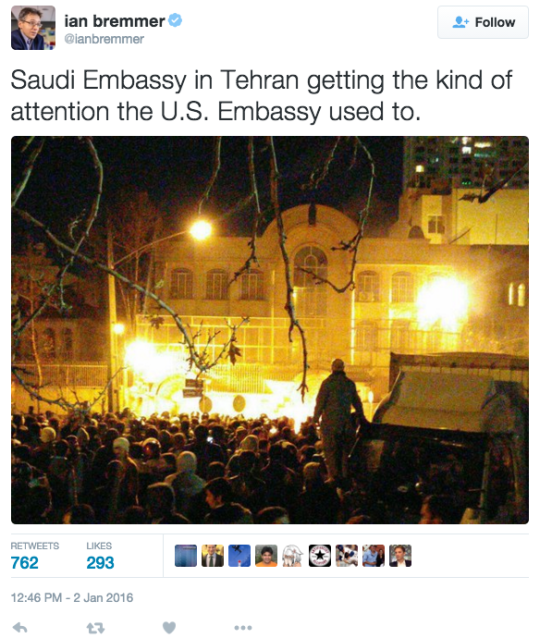 But the real worry is with Saudi Arabia’s restive Shia minority — which happens to live atop the country’s most plentiful oil fields. Already there’s word of a gun battle between police and civilians in al-Nimr’s hometown, with one civilian dead.

“I think that Saudi Arabia is going down,” said our Byron King in a bold forecast issued to Platinum-level Reserve members last week — before word of al-Nimr’s beheading.
In recent years, “the Mideast conflict has been in Libya, in Iraq, in Syria with the whole thing with ISIS,” he explained.
“A lot of that warfare and a lot those problem issues are funded, sourced and ideologically connected, fingerprinted all the way back to Saudi Arabia. This is the year that blowback is going to happen.
“We’re going to see revolution in Saudi Arabia, we’re going to see war in Saudi Arabia. Let your mind run wild with that.

“In the past year, Saudi leadership has made mistake after mistake,” Byron elaborated via email yesterday after al-Nimr’s execution.

On that last one, Saudi Arabia’s ability to withstand low oil prices is not unlimited. Because those low prices are blowing out its budget deficit, the government cut fuel subsidies last week — effectively raising the price of gasoline by 50%.
“When the ruling clique cuts back on subsidies,” says Byron, “the ‘keepers of the holy places’ don’t look so smart — let alone holy — anymore.
“I detect a true lack of strategic vision here — Saudi is inviting its own demise.

“When the wheels fall off in Saudi Arabia, energy prices will go up,” says Byron — getting to the investment implications.
“People say, ‘Oh, but here in America, we have all of our own oil.’ That’s bar stool talk. We don’t have all of our own oil, and the oil that we do have is still subject to the global price mechanism.
“If something bad happens in Saudi — and I’m warning that something bad will happen in Saudi this year — those prices are going to go up globally, and they’re going to pull up U.S. prices.”
Who benefits? “The companies that I think are going to benefit almost immediately are the oil service companies,” Byron says.
His favorite of the bunch is one we’ve mentioned here before, Schlumberger (SLB). “Schlumberger has really been hurt in the last year and a half because of low oil prices,” says Byron. “They’ve laid people off, they’ve cut back business. They’ve had to adapt.
“But Schlumberger seldom gets cheap, and seldom stays cheap for long. So my prediction is that when things happen, Schlumberger’s going to be among the first to recover.”
Just not today: SLB is caught up in the rest of the stock market downdraft, despite a rising oil price — down nearly 2.5% as we check our screens.

One item of unfinished business from 2015: The last-minute budget deal reached between the White House and Congress last month includes a plank that hastens the end of the dollar’s reserve currency status.
Explains Jim Rickards: “The International Monetary Fund and China have been waiting since 2010 for approval of a package of reforms that would increase U.S. contributions to the IMF by $300 million (with the money coming from U.S. taxpayers). The reforms also increase China’s votes in the IMF by 50% (from 4% to 6% of the total votes).
“Congress had long resisted this because of conservative opposition to using taxpayer funds to bail out Greece, Ukraine and other IMF critical-care cases.”

But House Speaker Paul Ryan agreed to include the reforms in the budget-buster spending package the president signed into law on Dec. 18.
“This expansion of China’s power, combined with the inclusion of the yuan in the IMF’s world money (the SDR),” Jim concludes, “is just one more nail in the dollar’s coffin as the leading global reserve currency.”

So the Janet Yellen drinking game is catching on.
Every year, Lake Superior State University in Michigan puts out a list of “Banished Words” — or at least, words it finds to be victims of “mis-use, over-use and general uselessness.”
At the top of the 2016 list is “so” used in a certain way at the start of a sentence. As explained by one of the nominators, “Currently, it is being overused as the first word in the answer to ANY question. For instance, ‘How did you learn to play the piano?’ Answer: ‘So my dad was in a classical music club…’”
Heh… The 5 pointed out nearly two years ago how Federal Reserve chairwoman Janet Yellen is one of the most notorious offenders. It’s how she began her reply to every hostile question at her confirmation hearings. You could make a drinking game out of it.
And you still can. For giggles, we looked this morning at the transcript of her most recent press conference last month. (Your editor is drinking only distilled water, rest assured.) Sure enough, any question that however politely challenged her worldview was greeted first by “So…”

Hmmm… Do you detect a common theme here?

“The greatest thing that could happen to this country,” writes a reader after our seditious episode of The 5 to wind down 2015, “is for Washington, D.C., to be turned into green glass when ALL of the politician and judges and their lackey staffs are there.
“The time for a Revolution is overdue. Jefferson said that the tree of liberty is nourished with the blood of tyrants.”
The 5: We hear you. On the other hand, as our executive publisher Addison Wiggin reminds us now and then, what guarantee is there that this time events would proceed along the lines of the American Revolution and not the French?

“Forty years ago, when I was a young man,” writes another, “my gramps told me this: The difference between America and Russia is that we think we are free.”
The 5: Which reminds us of a story recounted by several writers over the years; it appears to originate with the Scots-born Israeli author Simon Louvish.
A group of Soviet writers was touring the United States at the height of the Cold War. They were stunned to read the newspapers and watch TV… and find the opinions expressed on the major issues of the day were all the same.
“In our country,” they said, “to get that result, we have a dictatorship, we imprison people, we tear out their fingernails. Here you have none of that. So what’s your secret — how do you do it?”
How, indeed…
Best regards,
Dave Gonigam
The 5 Min. Forecast
P.S. As we get closer to virtual press time, the market plunge seems to have found a bottom. The Dow is holding the line on 17,000. Still, today is likely to be the worst first trading day of the year since — gulp — 1932.
This won’t be the last day in 2016 that events in China are sending markets into turmoil. Jim Rickards saw it coming late last year. In fact, it moved him to record an urgent video message.
It couldn’t be more timely — or actionable — today. Check it out now — while it’s still current.