“The damage from the Fed’s December interest rate hike is piling up and going to get worse,” says Dan Amoss of our macro research unit.
“The Fed is tightening into an already weak economy,” Jim Rickards said in this space on Dec. 17 — the day after the Fed lifted its benchmark interest rate from near-zero levels.
Conventional wisdom had it that the Fed wouldn’t be raising rates if it thought the economy was unable to handle it. Raising rates should be a sign of confidence!

Yeah, not so much — not after a raft of economic numbers out this morning…

To top it off, the National Retail Federation announced holiday sales fell short of its forecast. Shocking, we know.

And with that, the safety trade is back on, big-time, after a one-day layoff…

Yes, there are other worries besides the U.S. economy out there. China’s stock market tanked again overnight. It’s now in a bear market — down 20% from its high only last month.
And the tumble in crude is partly because it’s dawning on traders that United Nations sanctions on Iranian oil might be lifted a few days hence. Recall last June, a trusted source told our Byron King that Iran has at least 34 supertankers loaded and ready to deliver 50 million barrels of oil at a moment’s notice. The moment is drawing near…

It’s at a moment like this when markets are especially vulnerable to an unexpected shock — such as the double cross by Saudi Arabia we’ve been anticipating.
To quickly recap, the Saudi Arabian riyal is one of the few currencies on the planet that haven’t devalued relative to the dollar during the last four years. With oil prices as low as they are… and the government dependent on oil for more than three-fourths of its revenue… the riyal is under immense pressure.
The Saudi Arabian princes are relieving some of that pressure by drawing on the kingdom’s substantial foreign exchange reserves. Notice how its reserves began falling in mid-2014, around the time oil prices peaked near $110 a barrel… 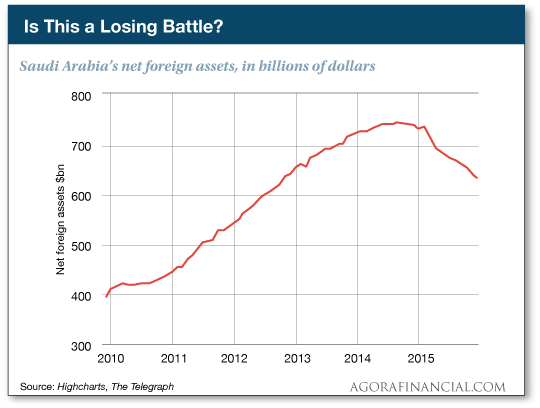 Over the last 18 months, the princes have drained nearly 14% of their forex reserves. That’s a situation that can’t go on indefinitely.

Enter the jokesters at the World Bank — who are urging the Saudi regime to keep doing more of the same.
“For now they have large reserves, and reserves can be used during an adjustment period,” World Bank economist Franziska Ohnsorge tells the London Telegraph.
Easy for someone sitting in an office at World Bank headquarters in Washington to say. Not so easy if you’re in the Saudi royal family wondering how you’ll continue scraping together the money to buy off a restive population with fuel subsidies, housing subsidies, government jobs and so on. The future of your regime — heck, your own life — depends on it.

Besides, the Saudi princes remember how international do-gooders like the World Bank made a hash of things in Asia during the late 1990s.
Back in 1997, the governments of Thailand, South Korea and Indonesia found themselves in crisis. They needed loans from the International Monetary Fund.
A young 30-something economist at the IMF devised a $200 billion rescue package, attaching the usual conditions that come with such loans — slash government spending to keep the debt burden down.
Thing is, those Asian governments all had sound finances. Reckless government spending wasn’t the problem. The problem was “hot money” in the private capital markets rushing out of those countries.

The IMF’s cure ended up being worse than the disease. The resulting turmoil brought down the Suharto regime in Indonesia after three decades.
“Suharto’s government delivered 21 years of 7% growth,” former Australian Prime Minister Paul Keating once recalled. “It takes a gigantic fool to mess that up. But the IMF messed it up. The end result was the biggest fall in GDP in the 20th century.”
As the crisis passed and the new millennium dawned, the governments of Indonesia, South Korea and Thailand decided they would never again be held hostage to the likes of the IMF and World Bank. So they went to town building up their foreign exchange reserves.
Other Asian governments followed suit, China foremost among them. That’s one reason why China’s forex reserves grew from $166 billion in 2000 to $3.3 trillion today.
By the way, the name of that “gigantic fool” 30-something economist? Timothy Geithner. Yeah, Obama’s first Treasury secretary. Talk about failing upward. 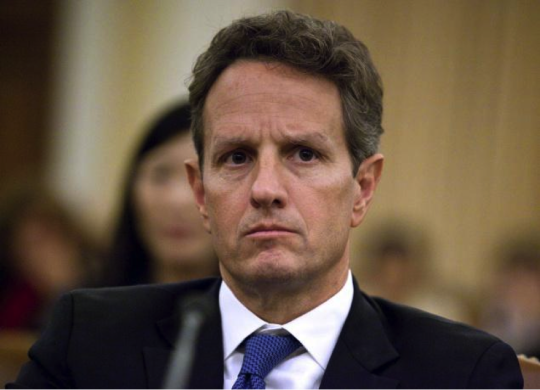 So there you have it: Good ol’ TurboTax Timmy’s miscalculations nearly two decades ago guarantee that Saudi Arabia will soon act to safeguard its forex reserves. And the only way to do that is to devalue the riyal against the dollar.
It will be, says Jim Rickards, the third great currency shock in a little over a year. The first came a year ago today, when the Swiss franc broke its peg to the euro. The second came last August, when China broke its peg to the dollar. Both moves came as surprises to the mainstream and sent markets into a tizzy.
What Jim calls “The Great Currency Shock of 2016” is just around the corner — perhaps a week from today, he surmises. That’s why he’s holding an exclusive online workshop next Monday night at 7:00 p.m. EST to help you stay ahead of the market action.
If you’re not available at that hour, you can watch a recording of the event anytime after that.
Either way, it costs you nothing to look in on this event. Just RSVP us at this link with your email and we’ll make sure to save you a spot.

No profits at Goldman Sachs? Say it ain’t so!
“Goldman Sachs has reached a $5.1 billion settlement with the U.S. government and other agencies for mis-selling mortgage-backed securities in the run-up to the financial crisis,” says the Financial Times. That’s enough to vaporize most of GS’s fourth-quarter profits.
“Mis-selling”: That’s a terrific euphemism. Among the mortgage-backed securities Goldman “mis-sold” were ones that the firm created only because hedge fund king John Paulson wanted to short the hell out of them — a tiny fact that wasn’t disclosed to the buyers.
The settlement comes at a time Goldman shares are under pressure, like the rest of the banking industry. “Bank stocks float on air when the economy is perceived to be strong,” Jim Rickards said here two months ago.
“Higher rates allow banks to charge customers more, which increases their lending spreads. Strong growth is also conducive to mergers and acquisitions, and the investment banking fees that go with that.”
At that time, Jim urged readers of Rickards’ Intelligence Triggers to lay on a “Kissinger Cross” trade that was a bet against Goldman. As we check our screens this morning, that play is up 132%. Not bad for two months’ work. (Another play, focused on trouble in emerging markets, is up 128% after only three months.)
You’re not a subscriber yet? You can remedy that here.

“Not sure why you are unsure what is meant by ‘indigenous American culture,’” an Australian reader writes in response to yesterday’s mailbag.
“Who are indigenous Americans? Right — the ones who were here before Columbus came. Culture? I think you know the meaning of that word. Generally peaceful people living in harmony with nature.
“P.S. Our indigenous people are now asking to be called ‘traditional landowners.”

“Yes, that was sort of a foggy term, and I could have done better,” writes the reader who got the “indigenous American culture” discussion going. He suggests “traditional” might carry less baggage.
“What I am describing, of course, is the uniquely American culture (and the constellation of institutions that support it) that has been observed by everyone form Alexis de Tocqueville to Max Lerner in his famous text America as a Civilization, written back in the late 1950s.
“Borrowing Hazel Henderson’s evocative term, it is precisely this unique cultural DNA that has enabled America to do everything from putting human beings on the moon to feeding the world, to creating a thriving middle class to conducting a profound (and mostly bloodless) revolution in civil rights, all the while continuing to champion human dignity, the entrepreneurial spirit and the innate rights of men and women everywhere.
“This, in opposition to the multiculturalist hokum that asserts that the Wahhabist culture of Saudi Arabia/ISIS is just as good as — or even superior to — ours, and that we must rid ourselves of our ‘steeped in evil’ Eurocentric past. As Gregory Copley (and, likewise, such scholars as Carroll Quigley and Samuel Huntington) would attest, it is resilient, resourceful cultures — again, their cultural DNA — that carry societies through tough times, and let’s hope that we as Americans still have the right stuff.
“By all accounts, the Russians do, and I think that this is what many people find so admirable about them, despite the efforts of the hollow men and women in Washington to characterize them as our enemy.”
The 5: Thanks for the clarification. And yes, we were being a bit provocative saying we weren’t quite sure what you meant.
We get a little nervous at the mention of the late Professor Huntington, though. His “clash of civilizations” thesis has been something of a self-fulfilling prophecy these last 15 years, thanks in part to other “hollow men and women in Washington.”
But that’s a story for another day; this Friday episode of The 5 is way too heavy as it is!
Have a good weekend,
Dave Gonigam
The 5 Min. Forecast
P.S. As we get closer to hitting the “send” button, the S&P has broken below last August’s lows and is now down 3% on the day.
U.S. markets will be closed Monday for Martin Luther King Day — a welcome respite, under the circumstances.
The 5 will likewise take a breather… but you won’t want to miss Jim Rickards’ live briefing Monday night, spotlighting “The Great Currency Shock of 2016.” This shock could hit the market as early as a week from today. And Jim will show you how to brace for impact.
The event is Monday at 7:00 p.m. EST. Participation is free… but availability is limited. To secure your spot, just follow this link to sign up.
We’re back tomorrow with our Saturday wrap-up 5 Things You Need to Know. The weekday edition of The 5 returns on Tuesday.