How To Survive Another 2008

Did anyone else get a sense of déjà vu watching the Super Bowl last night? There were commercials for websites offering… we don’t know what. Just like 2000, right before the dot-com crash.
And there were intimations of 2008 as well: The Twittersphere ripped into an ad for the Rocket Mortgage app from Quicken Loans. It said upfront that more mortgages lead to more people buying more crap to fill their homes that they don’t need and can’t afford — and by God, that’s what America’s all about!
OK, it wasn’t quite that brazen. But close: “And wouldn’t those buyers need to fill their homes with lamps and blenders and sectional couches with hand-lathed wooden legs?”

By the way, after we went to virtual press Friday, the Federal Reserve issued its monthly consumer credit report. The growth in revolving credit — meaning credit cards — was off the charts during November and December, at least by the standards of recent years.
Recall that holiday retail sales were weak. So that means the meager amount of crap people bought in November and December was put on plastic. ’Murica!

“According to the infamous Super Bowl Indicator,” says Jonas Elmerraji of our trading desk, “a win from the NFC team (the Panthers) means that stocks are ending the year higher. A win from the AFC team (the Broncos) would be bearish.”
Hmmm… Was Cam Newton acting churlish after the game because his broker locked him into a bunch of bullish trades he can’t unwind?
According to MarketWatch, the Super Bowl Indicator has been accurate 82% of the time. But not, we hasten to add, when NFC teams won in 2000 (St. Louis) and 2008 (New York Giants) — heh.
Of course, that doesn’t mean stocks will be off to the races this year because the AFC team won. As the saying goes, correlation does not equal causation.

Meanwhile, stocks are tumbling this morning as 2016 continues its worst start since… drumroll, please… 2008.
Friday’s hard sell-off after the weak job number has dragged into today: At last check, every major U.S. index was off at least 2%. At 1,837, the S&P 500 is as low as it’s been all year… or last year.
There’s no obvious reason; the financial media are resorting to the usual “global growth” and “oil” concerns — even though crude is holding the line on $30 rather nicely right now.

The big news is that gold is again benefiting from the safety trade. At $1,196, the Midas metal is nearly $50 higher than it was at this time on Thursday. Indeed, it’s higher than at any time since last June.
Treasuries are also rallying, sending yields down; the 10-year yield just touched 1.75% and is quickly approaching lows reached around this time a year ago.
As long as we have the epic crashes of 2000 and 2008 on our mind today, we might as well reinforce a point we tried to make last week…

“The world changed in October 2008,” says our new super-trader Michael Covel.
“Brokers, financial advisers, the financial media and the government will tell you that no one made money during this time. Everyone lost.
“But guess what? That’s a big fat lie.”
Sure is. Indeed, one of the current movies, The Big Short, is all about the hedge fund types who saw what was coming and capitalized on it. But it wasn’t just people short selling exotic mortgage securities who made money at that time.
So did the people like Michael who specialize in the unique kind of chart watching known as “trend following.”
“There were winners during October 2008, and they made fortunes ranging from 5– 40% in that single month. Who were the winners? Trend followers. Many of my trend following colleagues from all over the country made a fortune in 2008, a time when most investors got creamed.”

How did they do it? “First,” says Michael, “let me state how they did not do it:

“What did they do? Trend followers made money in many different markets from oil to bonds to currencies to stocks to commodities. Trend followers always seem to do particularly well in times of wild and extended price swings, in part because their trend following trading systems programmed into computers can make calculated, emotionless buys and sells that human traders might be slower to accept.”
The good news is that you don’t need a rack of computer servers loaded with proprietary trading software to make money in a down market. All you need to do is follow Michael’s trend following system. Among the trades you could have captured using Michael’s system: 359% on Bofl Holdings… 951% on Acadia Pharmaceuticals… and 2.023% on Regeneron.
As long as you’re willing to break one of Wall Street’s cherished “rules”… you’ll be in line to make money no matter what the market does… as Michael shows you when you click here.

Guess you can put Iran under the “de-dollarization” column: Reuters reports the Iranian government wants payment for its oil in euros.
A source inside Iran’s state-owned oil company tells the newswire that euro payment is expected not only for future deliveries, but even for oil already delivered and not yet paid for. Indian government sources confirm this development; India owes Iran about $6 billion, or should we say 5.37 billion euros.
“Switching oil sales to euros makes sense,” says Reuters, “as Europe is now one of Iran’s biggest trading partners.”
“De-dollarization” is a term that first turned up in the spring of 2014. As we explained it in real-time, Russian bureaucrats used it to describe the topic of a meeting with their counterparts from China.
Something to ponder: Russia and China are the two main powers in a non-Western group of countries known as the Shanghai Cooperation Organization.
Iran has been blocked from SCO membership in recent years while it was under U.N. sanctions; with those sanctions now lifted, Iran might well join up this year, along with India and Pakistan. That could be a powerful de-dollarization bloc…

Meanwhile, China keeps burning through its foreign currency reserves at a torrid pace.
Over the weekend, the Chinese government reported the Middle Kingdom’s forex reserves plunged $99.5 billion in January, to $3.23 trillion. That’s not as extreme as December’s drop, but it still brings China’s forex stash down to levels last seen in May 2012. 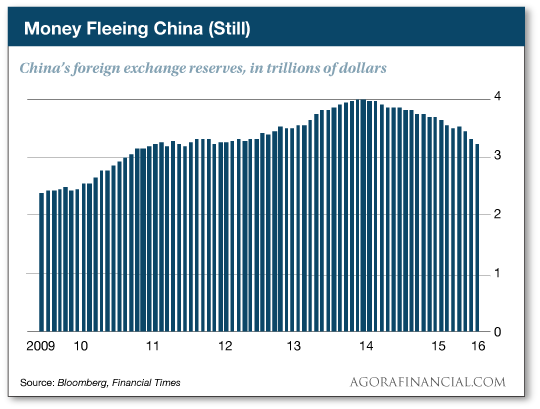 It’s a massive flight out of yuan and into dollars by Chinese businesses and citizens… and as we’ve been saying for a while now, it can’t go on indefinitely.
As Jim Rickards explained here in December, China’s been trying to pull off the “impossible trinity” — a monetary policy independent of other central banks… an open capital account allowing investors to move their money in and out of the country easily… and a fixed exchange rate.
Jim says China will have no choice but to continue to devalue the yuan relative to the dollar. Of course, Chinese leaders are putting on a brave face: “I can assure you that so long as China keeps up with its reform and opening-up policy,” said Premier Li Keqiang on Friday, “the Chinese currency will not depreciate greatly.”
Reminds us of the legions of U.S. Treasury secretaries who’ve paid lip service to a “strong dollar” even as they’ve acted to steadily erode its value over the years…

“Who pays corporate taxes?” a reader asks rhetorically, carrying on a discussion from last week. “Only the very rich or the very poor corporations.
“And by poor, I mean stupid. There are enough deductions and loopholes to greatly reduce taxes on businesses, unless you have huge margins. Those who choose not to employ a tax expert will become part of the very poor group.
“And don’t even talk to me about those poor businesses that pay their taxes under the individual (single proprietor) rate plans. For those making over $250,000 a year. there is no excuse for doing that.
“Caveat: I am not currently a business owner and have never made over 250K a year.”

“Not only is taxation a burden on corporations but also on the average productive working man,” writes another. “Taxation as it exists in this country is a disincentive to productive activity of all kinds.
“Sometimes the government tries to rectify the damage by offering tax incentives for certain activities. What we really need is the incentive tax, not tax incentives. Over 100 years ago, Henry George proposed the only legitimate fiscal reform ever offered that would eliminate all forms of taxation save government collection of the rent for the exclusive use of land and resources. These are the ‘fruits of the earth’ in which we should all share.
“Some Georgists question whether the government could be trusted to administer this fund equitably and advocate instead that the proceeds should be used to pay a citizens’ dividend from which the average man could purchase the services he desired/needed from the private sector. There are additional benefits from enacting this reform, which I do not have time to go into here.”
The 5: Sorry, but the government has proven itself an utterly inept manager of land and resources. See “Land Management, Bureau of.” Also, many Western wildfires of recent years.

“Thank you, 5, thank you!” says one of our regulars after we replied to his email in Friday’s episode about the corporate income tax.
“I have diligently looked for a suitably descriptive term for U.S. voters and you gave it to me — ‘booboisie.’ It may not help the USA, but finally, my politik is complete.”
The 5: Don’t thank your editor. Thank a much more accomplished Baltimore-based writer, H.L. Mencken. He’s generally credited with coining this delicious expression in 1922.
Best regards,
Dave Gonigam
The 5 Min. Forecast
P.S. It’s not just in 2000 or 2008 that Michael Covel’s trend following strategy could have made you money in a down market.
It’s proven to work looking back through 10 crashes and bear markets going back to the Panic of 1907.
As we go to virtual press, the major U.S. indexes remain deeply in the red for the day. There’s no better time to give Michael’s strategy a look than now.