Higher Income From a Lower Market

Damn those Swedes!
The safety trade is on big-time today… again. It probably would have been anyway, but Sweden’s central bank acted overnight to push interest rates even deeper into negative territory than they were already — its benchmark rate moving from minus 0.35% to minus 0.50%.
“The decision sparked extra market volatility,” says the Financial Times, “hitting financial stocks and adding to investors’ fears that central banks are seeking ever more extreme measures to support economies while themselves becoming a source of uncertainty rather than a balm.”
Well, we did say a year ago that 2015 would be “the year confidence was lost in central bankers.” If it wasn’t already obvious by the end of 2015, it is now.

Among the currencies, buyers are scooping up dollars, euros, yen and Swiss francs.
Crude is about to retest the lows of last month, a barrel of West Texas Intermediate fetching $26.53.

“Is a bear market really such a bad thing for your income investments?” asks our income specialist Zach Scheidt.
Nothing like a rhetorical question out of left field to keep things interesting here at The 5 — heh.
“No one really likes it when their stocks trade lower,” he acknowledges. “But what you may not realize is that when your dividend stocks temporarily lose value, it actually sets up an opportunity for us to grow our income — sometimes by a very large amount.”
Zach uses this hypothetical — a solid consumer products company trading for $80 and paying a 50 cent dividend each quarter. That’s a $2 annual dividend per share, or a yield of 2.5%. Not very exciting, right?
But what if a bear market comes along and knocks the share price down to $50? The company still pays that quarterly dividend, amounting to $2 a year. But now your yield is a respectable 4%.
“If you’re in a position to be able to buy more shares at a lower price,” says Zach, “we can actually purchase more income with our investment money!

“One of the best ways to juice your income payments,” Zach goes on, “ is by participating in a dividend reinvestment plan (DRIP).
“When you enroll in a DRIP, the size of your position automatically grows over time. And since you own more shares of stock each quarter, your dividend payments get larger and larger. Larger payments mean more shares of stock are bought — and the cycle continues…
“If you’re enrolled in a DRIP program and the stock price moves lower, your DRIP plan will be able to buy more shares each quarter. This is not something you have to monitor or keep track of each quarter. The shares will automatically be bought in your account, and your next dividend payment will automatically increase.”
Every new subscriber to Zach’s entry-level newsletter Lifetime Income Report gets a special report explaining how this works. It’s called How to “Juice” the Dividend Payments on Your Favorite Stocks. Access here.

A tax-advantaged retirement account is another excellent way to boost income.
An IRA — or a 401(k) with flexible investment options — “gives you an excellent opportunity to regularly invest new capital in dividend stocks,” says Zach. “And this way, your income continues to grow as you add more shares.”
Obviously, this won’t be income you can go out and spend right away — it has to stay in the account, after all. “But if you do this on a monthly basis,” Zach explains, “you’ll automatically buy more shares when stocks are trading lower. And once again, that means you’ll get more income for every dollar you spend on buying shares at a discount price.”

Bottom line: For all the market’s ups and downs, “if we buy shares of well-run companies that pay great dividends and are growing their businesses, our stocks will eventually trade higher and our income will continually increase,” Zach concludes.
“The next time you read a newspaper article about the Dow dropping 400 points, just realize that this decline likely sets up an opportunity for you to capture more income using these two practical income boosters.”
And if you have a substantial amount of capital to work with — at least $20,000 — you can pull down instant income payments using Zach’s “perpetual income strategy.”
We have several evangelists for this technique here at Agora Financial — starting with our publisher, Joe Schriefer. As you might be aware, he believes in the strategy so much he conducted a “social income experiment” with a video camera right outside our Baltimore HQ recently.
The results were both intriguing… and lucrative. Check it out at this link.

“This breakout looks like the real deal,” Greg Guenthner of our trading desk says about gold.
Longtime readers will recall it was Greg who alerted readers to gold’s catastrophic breakdown in February 2013 at the $1,650 level. By the end of that year, it had tumbled to $1,250.
As we continue to write this morning, gold has now punched above that $1,250 level. Only yesterday, Greg told his Rude Awakening readers that gold was still locked into a long-term downtrend if it couldn’t break above $1,200. Today, however, it’s done just that… 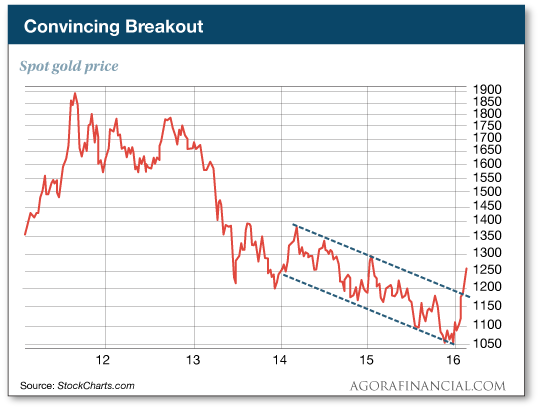 “I’d expect some backing and filling from here,” Greg tells us over IM. So don’t expect $1,400 tomorrow barring something earthshaking. “But it’s a pretty telling move.”

Even with stocks’ precipitous drop this morning, the S&P 500 remains in “make or break” mode, says one of our other trading specialists, Jonas Elmerraji.
The S&P has been hovering just above long-term support for the last 20 days or so. By long term, we mean going back to the Panic of 2008… 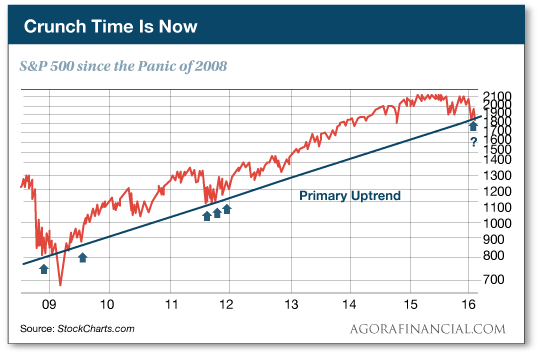 Meanwhile, shorter term, “Ever since last August, the S&P has reversed higher every time it’s come down into the 1,875 range,” says Jonas. “Sometimes, it’s busted through 1,875 temporarily, only to end back above that level.”
The tell will be the close today. “If we see a close down around 1,825, then I think we have a pretty definitive sell signal for the broad market.”
As we check our screens, the S&P rests at 1,821. Tune in tomorrow…

And now the strangest entry yet in our ongoing chronicle of commodity thefts.
Yes, commodities are down in the dumps. Stealing manhole covers for the copper isn’t nearly as lucrative as it once was. Certainly, no one is motivated to steal copper tubing filled with scalding-hot fluid from a live TV transmitter crackling with 35,000 volts — a caper in Kansas City we documented at the commodity peak in 2011.
For our purposes today, the definition of “commodities” is expanded to include… beehives. 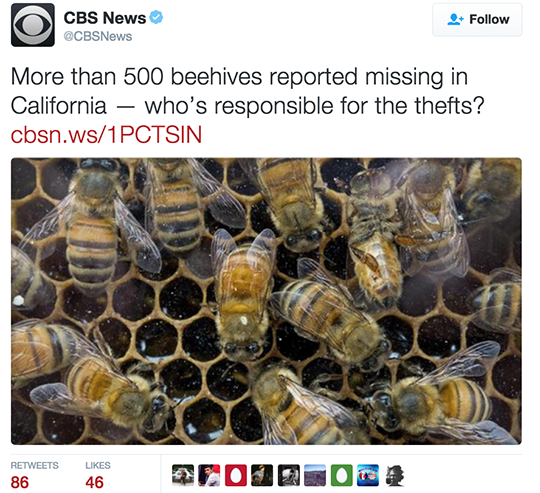 Around this time of year, nearly 90% of all commercial beehives in the United States wind up in California for the almond harvest. Farmers will rent hives for up to $200 each — five times the rate charged in 2004.
That’s too lucrative for thieves to pass up. “At least a half dozen honeybee thefts have been reported this year in five counties — Butte, Colusa, Glenn, Kern and Sutter,” says an NBC News account. “Some beekeepers have estimated their losses could reach $100,000 for the theft of hundreds of hives they rent out to pollinate almonds and other crops.”
Fewer commercial hives are available for rent this year thanks to several diseases and disorders like varroa mites.
The perps? They might well be other beekeepers, seeing as there’s usually evidence of flatbed trucks and forklifts having visited the scene of the crime. “It’s obvious that it’s another beekeeper,” says a Butte County sheriff’s detective.

“I watched the Super Bowl on Sunday, and of course, I wanted to see the commercials,” writes a reader by way of introducing a new wrinkle in the war on cash.
“Most of the time, the commercials are the best part of the day. But alas, I was so disappointed. The commercials were mostly junk, except for one.
“PayPal had a commercial on ‘old’ money versus ‘new’ money. They showed a picture of a stack of money, calling it the old money. Then they showed a picture of using PayPal, the new electronic money. The implication was very clear that the old money is going away and the new money is the future.
“This fits right in with the cashless world we are headed for, and it is moving at an increasing rate. Get as much cash as you can, folks. Stuff it in your mattress if you have to, but get it out of the system. If it is in electronic form, it is in danger.”

“I do not think that cash can be abolished in the present setting, at least not in Europe,” writes a Swiss reader after we observed on Tuesday that Europe seems to be the lab rat for such schemes.
“In Switzerland, this would need a referendum, which makes it impossible. If the German government wants to forbid cash payments below 5,000 euros, we would see a repeat of 1918, when the merchants of Lichtenstein refused to take Austrian money and insisted on Swiss money, which forced the government to change the country from an appendix of Austria to one of Switzerland.
“Similar motions can already be observed in regions of Switzerland and Italy bordering on Switzerland.”
The 5: Interesting, for sure.
In addition, we’re keeping an eye on the Vollgeld Initiative in Switzerland. Basically, it would ban fractional reserve banking; commercial banks would be unable to conjure money from thin air by issuing loans.
“Banks won’t be able to create money for themselves anymore,” say the campaign organizers. “They’ll only be able to lend money that they have from savers or other banks.”
That’s the good news. The bad news is that all power to create money would be concentrated in the hands of the Swiss central bank. That’s supposed to be progress?

“Thanks especially for today’s brutal dose of truth,” a reader writes.
“The next president, assuming it’s one with his head screwed on right, will need to get every banker in the country in the White House on Day 1 and deliver in Marine drill instructor’s fashion, a lecture on simple economics.”
The 5: We’re not sure which “today” you’re referring to… or what part of which episode of The 5, for that matter… but if what you describe is our only hope, we really are toast!
Best regards,
Dave Gonigam
The 5 Min. Forecast
P.S. As stocks and oil sink while gold and bonds rally, we remind you Michael Covel’s trading system has proven performance through both the dot-com rout of 2000–2002 and the financial crisis of 2007–09.
Many people applying Michael’s “trend following” techniques made as much as 40% as the market crashed in October 2008. “Trend followers made money in many different markets, from oil to bonds to currencies to stocks to commodities,” he says.
“Trend followers always seem to do particularly well in times of wild and extended price swings, in part because their trend following trading systems programmed into computers can make calculated, emotionless buys and sells that human traders might be slower to accept.”
As we said on Monday, you don’t need a rack of computer servers loaded with proprietary trading software to make money in a down market. You don’t even need a lot of money to get started.
All you need is Michael’s system and the willingness to break one of Wall Street’s alleged “rules” — as he explains at this link.