This is nuts — lending your money for 10 years, knowing when those 10 years are up, you’ll get less money back than you started with.
Yesterday, for the first time, the Japanese government auctioned new 10-year bonds with a yield less than zero. And buyers showed up en masse! For every 10,000 yen invested, the Japanese government will shave off 2.4 yen every year for 10 years.
“The buying,” says the Financial Times, “appears to have been almost entirely dealers and speculators looking to hold the paper for a brief time or covering short sales accumulated in expectation of the yield dropping into negative territory.”
Well, exactly. Everyday Japanese have more sense than to buy a government bond with a negative yield. As we pointed out last week, they’re instead buying home safes in which to stash their cash… because cash on deposit at the bank is likewise guaranteed to lose value.

The current round of currency wars is now in its seventh year. It began in early 2010 with President Obama’s State of the Union address.
He announced the “National Export Initiative” — laying out the goal of doubling U.S. exports within five years.
“Of course,” says Jim, “the U.S. could not become twice as productive or twice as populous in five years. The only way to double exports was to trash the currency, and that’s exactly what happened.”
“The dollar plunged over the next 18 months to an all-time low in August 2011. (Not coincidentally, gold hit an all-time high of $1,900 per ounce the same month the dollar hit its all-time low.)
“The world noticed the new currency war long before the summer of 2011. In September 2010, Brazilian Finance Minister Guido Mantega cried foul and publicly declared that a ‘currency war’ had begun. (Brazil’s exports and tourism were being crushed at the time by a strong currency.)”
And as we’ve noted before, the president didn’t even achieve his stated objectives: U.S. exports grew 50% from 2010–2015, meeting the goal only halfway.

“The classic problem with currency wars is that the losers eventually fight back by trashing their own currencies,” Jim goes on.
“That’s exactly what happened this time. In December 2012, Japan announced ‘Abenomics,’ with an explicit goal of cheapening the Japanese yen.” The Europeans followed suit in 2014, and the Chinese last year.
“During this prolonged counterattack by China, Japan and Europe, the dollar went from weakness to strength. 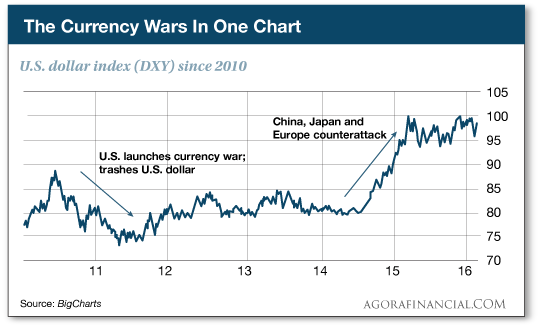 “Currency wars are like two kids on a playground seesaw,” Jim explains. “If one is up, the other must be down. As China, Japan and Europe counterattacked in the currency wars, the dollar got stronger and stronger.”

So now what? “The Fed is still tightening and the dollar will remain strong for most of 2016,” Jim says.
“The fallout from the strong dollar is still being felt in the hidden corners of U.S. corporate earnings.
“The biggest hidden impact at the moment is the damage to U.S. exporters and manufacturers. A strong dollar makes U.S. exports unaffordable to foreign buyers, who have to convert their local currencies to dollars to buy our goods. The impact is not limited to big-name exporters like Boeing and Caterpillar. The effects are felt up and down the U.S. manufacturing supply chain.
“This story is not new, but it is getting worse, and the bad news is far from over.”
In fact, Jim says it’s one of several factors that’s about to trigger a startling new formation on the charts of the major U.S. stock indexes. This formation isn’t something you hear most technicians talk about. Not yet, anyway.

Jim calls it “the cannonball”… and he says you need to act now to get out of its way. He’ll be out with a brand-new research report about it tomorrow. Watch this space for details.

In the meantime, the major U.S. indexes are treading water after their big run-up yesterday. As we write, the S&P 500 is off a fraction of a point, at 1,978.
Treasury yields are backing up, the 10-year note just below 1.87%. Gold is holding its own at $1,237.
Crude is moving up again, perhaps due to resumed chatter about a production freeze among the globe’s major producers. Yesterday, Russia’s energy minister said governments representing 73% of world production had agreed to a tentative deal.
Really? Not 74%, or 72%?
In any event, a barrel of West Texas Intermediate is now within a quarter of $35.

“Every bubble pops,” muses our newest editor, Michael Covel, about China.
China’s stock market leaped 4% overnight. But it’s still down 45% from the peak last June — right around the same time Michael delivered a talk to a crowd of more than 1,000 in Beijing. (The highlight was when a few people who knew English rebelled against a crummy translator; one of them volunteered to take over.)
If you’ve been reading regularly in recent weeks, you know Michael shares the oft-expressed concerns about the national debt, the Federal Reserve and so on. So he has three takeaways in light of the Chinese meltdown last year…

But as Michael has explained before, trend followers like Michael made money during the Panic of 2008. As long as they were willing to ignore Wall Street’s buy low/sell high “rule,” they were in great shape. Check out Michael’s proof if you haven’t already.

The war on cash manifests itself in strange ways… as they know once every quarter at California’s Board of Equalization.
As we’ve mentioned now and then, marijuana businesses that operate legally under state law are blocked by the Federal Reserve from access to the banking system, because weed remains banned under federal law. So they’re stuck operating cash-only.
But California’s medical marijuana dispensaries still must collect and pay sales taxes. Solution: cash collection day, once every quarter. A recent story in The Guardian describes business owners bringing in cash payments ranging anywhere between $30,000–400,000 to an office in Sacramento. All told, the Board of Equalization collected $200 million in cash payments from pot businesses last year.
“The teller windows in the office,” says the story, “do not have slots big enough for the cash-stuffed envelopes to slide through. They will have to be retrofitted to be bigger.”
And then there’s the odor. Much of the cash reeks of weed… unless the business owner treated it with fabric softener and ran it through a dryer first. That must be an interesting combination…

“Let’s face it,” a reader writes about Apple vs. the FBI. “This isn’t about security versus privacy. It’s a simple question: Do we trust the government?
“Sadly, the answer is a resounding NO!”

“Please be correct when you make inferences about Donald Trump regarding the runaway government spending,” a reader writes.
“He has explained EXACTLY the difference between him and others — that ‘they talk about it’ but will never do anything because they are bribed via campaign contributions/speaking engagements, etc. He is not controlled by special interest money so is willing to do something about it.
“Specifically, he has clearly explained how the government does not exercise its buying power to reduce the price it pays for drugs and medicines. Amazing! This is a complete waste of taxpayer dollars, which he will remedy by intense bidding and competition. He also mentions weapons procurement — purchases being made at top dollar for not necessarily the best items, because of political connections and lobbying for specific manufacturers.
“Again, politicians will not remove this waste, because it would cut into their gravy train. Donald Trump is not beholden to the bribe monies.”
The 5: We merely related how he answered a question during the most recent debate, in his own words. If you don’t like the answer, take it up with him, not us.
All we’re saying is you can’t take on “waste, fraud and abuse” if the government’s own auditors can’t figure out how one dollar in every five is being spent…

“I have followed the beer issue between Canada and the U.S. with interest,” reads the latest suds entry in our mailbag.
“A few years ago, my brothers from Oregon came visiting us here in British Columbia. I offered them a Bud made in Canada. Both said our Buds tasted better than theirs. I haven’t tasted Bud in the States recently, so I have to believe their taste tests.”

And there’s more: “A friend, a superintendent at a U.S. brewery for a known regional brand, would tell me, ‘Today we ran 10,000 cases of Löwenbräu.’ Other days, it would be Beck’s or other imported brands.
“The actual beer, of course, was always their own usual formulation. That brewery was one of many eventually bought by Schlitz, but I think the reason that local microbreweries have been so successful is that much of the whole U.S. mega-beer business is outsourced to the flavored water produced by the lowest bidder.
“Labelling laws are about ingredients, but the brand names can be totally fictitious in relation to the brand of the actual contents. As Michael Pollan asserts, if we really want to know the source and content of the food and drink that we are actually getting, we have to grow it and make it on our own. Otherwise, we are just feeding our obesity for the benefit of the ‘medical-pharmaceutical complex,’ to borrow on a phrase from Dwight Eisenhower.”

“There are many microbreweries in the Willamette Valley of Oregon, where I live,” chimes in our final correspondent today. “The hops are grown here, and Mother Nature determines their quality. Many private individuals make their own beer here.
“My biggest complaint here is the FDA’s approval of the use of formaldehyde, period. It isn’t just in beer: It is in far too many foods and other beverages.
“They are in bed with Big Pharma to make us ill so they can thrive on a 17% cure rate set forth by the FDA! So do you blame the elite for this or D.C. lobbyists?”
The 5: There’s a difference?
Best regards,
Dave Gonigam
The 5 Min. Forecast
P.S. We see Sports Authority filed for bankruptcy this morning. It will close nearly one-third of its stores.
We’d write it off as a one-time thing… were it not for all the other retailers not in bankruptcy also closing stores — Wal-Mart, Kmart, Penney’s, Macy’s, The Gap.
By some estimates, a billion square feet of retail space sit empty in the United States.
Is it all the “Amazon effect”?
Or is it a sign of something else deeply wrong with the economy and the markets?

Jim Rickards’ brand-new special report is coming out tomorrow. You’ll be among the first to get a look at it.