The Panama Papers and the Virtual Berlin Wall

We can’t prove it — not yet anyway — but we suspect the “Panama Papers” are the work of someone in the global power structure firing an intercontinental ballistic missile in the war on cash.
If you’re not up to speed yet, 11 mil​lion documents have been leaked from a Panamanian law firm called Mossack Fonseca — spilling the beans on offshore tax evasion worldwide from the 1970s up to the present day. The identity of the leaker, for now, is a secret.
The papers first landed in the hands of the German newspaper Süddeutsche Zeitung. Now they’re being analyzed by 109 media outlets in 76 countries.
“The documents show 12 current or former heads of state and at least 60 people linked to current or former world leaders in the data,” reports the BBC.
They include the current prime minister of Iceland. The government of Australia has already launched an investigation into 800 of that country’s residents. In addition, “the documents demonstrate that as much as $2 bi​llion has been shuffled through banks and offshore companies said to be linked to associates and friends of Vladimir Putin, the Russian president,” says the Financial Times.

Conspicuous by their absence from the initial reporting is a meaningful number of Americans. The most prominent so far is Marianna Olszewski. 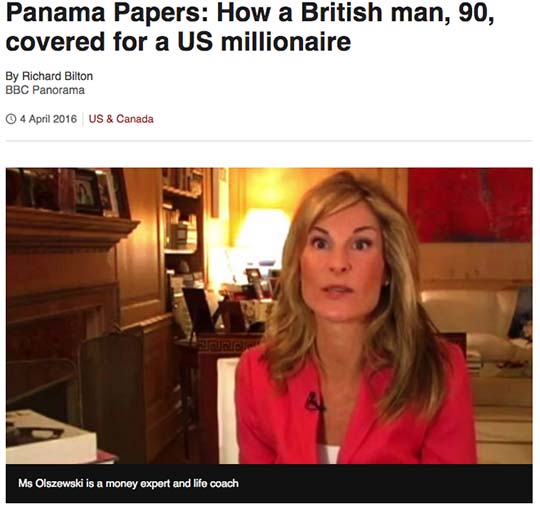 No, we’ve never heard of her either. Her claim to fame is a personal finance book called Live It, Love It, Earn It: A Woman’s Guide to F​in​anc​ial F​re​edo​m. We see used hardcover copies available on Amazon for a penny plus shipping. Perhaps it didn’t make an impact because it was published in late 2009 — when many women and men alike were more concerned with fin​ancial survival than fin​ancial free​dom.
Olszewski’s fortune came not from being a “life coach” but from running a broker-dealer. During the Panic of 2008, she had $1.8 mill​ion of her personal funds tied up in a secret offshore company, and she wanted it back. But the bank wouldn’t release the money without knowing who was behind the offshore company.
She contacted Mossack Fonseca, which prompted the following email exchange…

Mossack Fonseca executive: “We may use a natural person who will act as the beneficial owner… and therefore his name will be disclosed to the bank. Since this is a very sensitive matter, fees are quite high.”

Olszewski: “I do think we should go ahead with the natural person however I want to have your promise that you… will handle this in the most sensitive manner.”

It did. The firm dug up a 90-year-old man from Great Britain to be the “natural person” and sign all the requisite paperwork. For this service, Olszewski agreed to pay $10,000 the first year and $7,500 each year after that — a substantial discount off the firm’s usual fee.
The editor of the German paper that first got the documents is promising more Americans will be exposed. We’ll see.

So what’s it to you if you don’t have the sort of substantial assets that you’d willingly pay $7,500 a year to hide from the tax man?
It comes back to a theme we’ve covered in these virtual pages since 2010 — the “virtual Berlin Wall” that’s gone up around Americans and their money, locking us up into the U.S. dollar and U.S. banks.
It’s nearly impossible for Americans to open a foreign bank account nowadays — the compliance requirements with IRS rules are so onerous that most foreign banks can’t be bothered. The rules have tightened gradually since the passage of the Foreign Account Tax Compliance Act of 2010 (FATCA).
Not coincidentally, the number of Americans giving up their U.S. citizenship has been setting records nearly every year since… 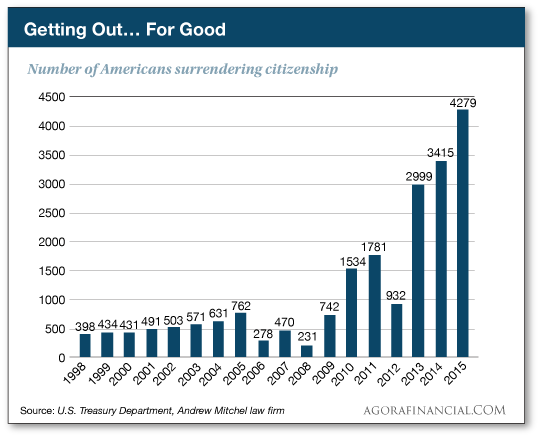 And as we’ve often documented, it’s not the uber-wealthy who dominate the ranks of those surrendering their U.S. passports. Even if they can open a foreign bank account, they can’t afford the average $2,000 of annual paperwork required to comply with IRS regulations on folks who live overseas.

From where we sit this morning, the Panama Papers aren’t about naming and shaming wealthy tax cheats: They’re about tightening the noose on everyone.
“The fallout from the massive data leak,” says the Financial Times, “will force Panama to give up the secrecy that has made it the ‘last, ultimate tax haven,’ according to the Paris-based OECD, which has been leading a global transparency drive.”
The OECD comprises most of the world’s developed countries and several large developing ones, like Mexico. It’s in the forefront of the war being waged against “drug dealers, money launderers and tax evaders.”
That’s the usual list of suspects whenever do-gooders start talking about why cash is such an awful thing and we should all submit to a new and glorious age of digital currency — the better with which every transaction can be tracked and government can slowly siphon off your wealth with negative interest rates.

The solution to all these problems — be it the war on cash or the war on financial privacy — is the same.
We cited a key passage a few days ago from Jim Rickards’ latest book, The New Case for Gold…
“The war on cash is mostly over, and the government won,” he writes. “But it’s not too late to get some gold, which maintains its worth as a physical store of wealth and is not affected by the digitization of other forms of money.”
Among the things you’ll learn in The New Case for Gold…

Publication day for The New Case for Gold is tomorrow. And our exclusive offer comes off the table at midnight tonight.
That’s a signed copy of the book with a bonus chapter exclusively for Agora Financial readers… plus access to a live online workshop tomorrow at 10:00 a.m. EDT, in which Jim shares intelligence he learned recently from a gold industry insider. You’ll learn why the gold price could move sharply and soon. (If you’re busy tomorrow morning, you can watch a replay.)
And for all that, you’ll pay only $4.95 to cover shipping and handling of the book. Here’s your next-to-last chance to take advantage of this extraordinary offer.

“The biotech beast has finally awakened,” says Greg Guenthner of our trading desk.
Biotech missed out on a healthy chunk of the stock market rally since mid-February. Much of that had to do with the meltdown at Valeant Pharmaceuticals — which cut its forecast last month and hinted it could face default if it can’t get its act together and file its annual report by the end of April.
But Friday’s market action was significant, says Greg: “It was a fairly routine day for the major averages. But biotech stocks said the hell with Valeant and ignited a run in the health care sector.”
IBB, one of the big biotech ETFs, broke through its 50-day moving average on Friday. And this morning, it’s broken through key resistance… 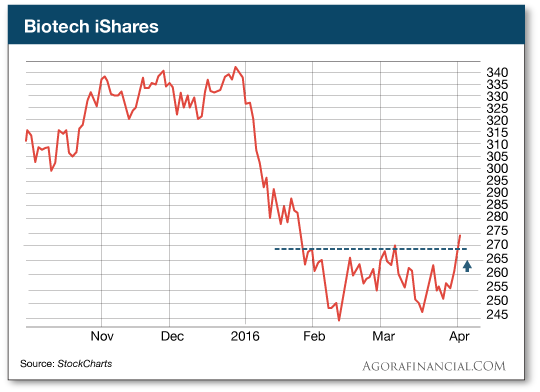 “No one wanted anything to do with biotechs just a few weeks ago,” Greg reminds us. “Now investors are fighting to get back into these stocks. That the fear of missing out in action. And that’s a powerful emotion.”

One of the nuttiest laws anywhere in America is about to come off the books: Coloradans will soon be able to conserve water in rain barrels.
Sixteen states have some sort of limit on the collection of rainwater, but Colorado was the only one with an outright ban.
A measure lifting the ban passed the state House in February and passed the state Senate on Friday. It now goes to Gov. John Hickenlooper for his signature.
“The bill has several key restrictions,” according to a story at Mother Nature Network. “One would limit homeowners to two rain barrels with a combined capacity of 110 gallons. Another specifies that the collected water would have to be used for outdoor irrigation on the homeowner’s property.”
Well, it’s progress. “The water laws of Colorado are complicated,” says the bill’s co-sponsor, State Rep. Jessie Danielson — a Democrat from the Denver suburbs. “We just want people to be able to have a couple of rain barrels to water their tomatoes. This bill makes sense to them.”

“Interesting exploration of the gold futures market,” a reader writes after we picked Jim Rickards’ brain on the subject Friday.
“Maybe good to add how share creation for ETFs work, since they are big holders, and last month, BlackRock had to suspend share creation because they couldn’t get any of the stuff.
“I don’t remember the details of how their ETN works or for how long the situation lasted, but I think it would be useful if Jim could explain. Could be a disruptive event if GLD were found out not to have the gold they should have. Hmmm.”
The 5: We’ll dig into the issue another day. For the moment, though, it’s worth knowing there are only two “paper gold” vehicles that Jim trusts… and he identifies them in The New Case for Gold.

“Dumb me,” a reader writes after we made passing mention on Saturday that the unemployment rate rose last month “for the right reasons.”
“I thought any increase in the number of people out of work is bad! But what do I know? I’m just one of the government’s ‘stupid’ taxpaying legal (milked cow) citizens.”
The 5: Heh, we mentioned it on Friday, but it’s always worth repeating.
If the unemployment rate is 5%, you have to remember that means 5% of the workforce. That gets into the thorny question of how the Bureau of Labor Statistics defines the workforce.
If you gave up looking for work longer than a year ago, you’re not counted in the workforce. If you decide to start looking again, voilà, you’re once again counted in the workforce.
So in March, the unemployment rate rose “for the right reasons” in that more people are looking for work again.
Ain’t government statistics grand?
Best regards,
Dave Gonigam
The 5 Min. Forecast
P.S. Absolute last chance: If you want Jim Rickards’ The New Case for Gold, plus a bunch of other goodies available only from us and described here, for only $4.95, you have to act before midnight tonight.
We won’t send you another reminder email tonight, so now’s the time to move.