Now comes the fallout from the “Panama papers.”
A month ago, someone slipped a trove of 11 million documents from a Panamanian law firm to a group of global journalists. They revealed how the firm’s clients were using offshore vehicles to either avoid taxes legally or evade taxes illegally.
We raised an eyebrow at the time — not least because precious few Americans were exposed in the documents.
But that’s not stopping the Treasury Department from seizing an opportunity: “The U.S. has launched a fresh crackdown on illicit money with new measures intended to stop tax evaders, money launderers and terrorists from concealing their identities in the U.S. financial system,” says the Financial Times.
Among the changes to the rules: Financial institutions are now required to verify the real people — the legal term is “beneficial owners” — who control the offshore vehicles that open accounts with those institutions. No more hiding behind some aging pensioner in Great Britain — as one of the few Americans exposed in the papers was doing.

By coincidence, this week, the Treasury Department also disclosed the number of Americans who surrendered their citizenship during the first quarter of this year.
If the present pace keeps up, 2016 will set another record… 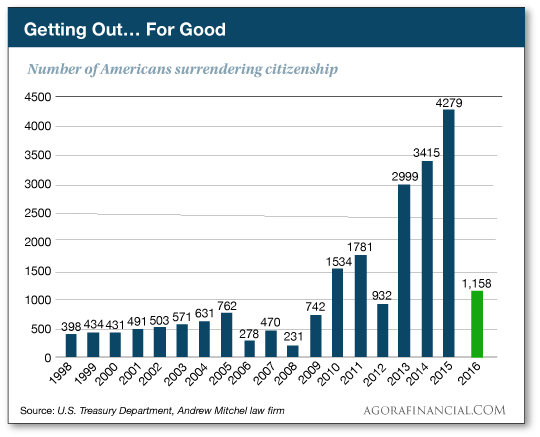 Blame it on the cumulative effect of the government’s previous rule-making… going back to the Foreign Account Tax Compliance Act of 2010, or FATCA.
Contrary to establishment propaganda, the ranks of the newly non-American are not dominated by the uber-wealthy like Tina Turner or Facebook co-founder Eduardo Saverin.
Some are “accidental Americans” — Canadians who never realized they held American citizenship until they got a nastygram from the IRS.
But many more are ordinary Americans earning ordinary incomes overseas. They’re fed up with 1) being unable to open a bank account where they live because the bank doesn’t want to contend with IRS reporting requirements and/or 2) paying lawyers and accountants an average $2,000 a year just to comply with IRS regulations on folks who live overseas.

One very important side effect of all these rules — or maybe it’s the whole point: It’s nearly impossible for Americans to open a foreign bank account.
Maybe you’re not super-wealthy, and maybe you don’t want to move abroad. Maybe you just want a little diversification so you’re not completely locked into the U.S. dollar and U.S. banks. But under FATCA, you too will find it nearly impossible to open a foreign bank account because of the IRS reporting requirements.

That’s one more reason we like the diversification that comes with gold. As Jim Rickards said here in The 5 last February, gold these days is acting less like a commodity or an investment than it’s acting like money.
“It is competing with central bank fiat money for asset allocations by global investors,” he explained. “That’s a big deal because it shows that citizens around the world are starting to lose confidence in other forms of money such as dollars, yuan, yen, euros and sterling.
“This is great news for those with price exposure to gold. The price of gold in many currencies is going up as confidence in those other currencies goes down.”

It’s this gold-as-money phenomenon that Jim says will ultimately drive the dollar price of gold to $10,000 an ounce.
That’s not a figure he pulled out of his posterior, either. It’s based on both the money supply and the official gold reserves of the globe’s major economic powers. (The complete formula can be found on Pages 6 and 7 of his new book, The New Case for Gold.) In the face of the next global financial crisis, it will take a $10,000 gold price to restore confidence in the system.
[Ed. note: If you’re among the legions who’ve already taken us up on our book offer and you’re still awaiting your copy… it’s coming soon. Demand for these signed copies was overwhelming and we were running the risk of giving Jim a serious case of writer’s cramp.
We’ll do our best to make it up to you — watch for an email from our customer service team either today or Monday.]

To the markets… where gold is sniffing out more monetary ease in light of the unemployment numbers this morning. The Midas metal popped as soon as the numbers came out; as we write, the bid is up 1%, at $1,291.
Not much of a reaction in any other asset class. The S&P 500 is off a quarter percent at 2,045, back into negative territory for the year. Crude is up a bit at $44.27. Treasury rates are little moved, the 10-year note at 1.75%. Even the dollar index is flat at 93.7.

The headline job number was a big, fat miss. The wonks at the Bureau of Labor Statistics conjured a mere 160,000 new jobs for April.
That’s the weakest in seven months. It’s barely enough to keep up with population growth. And it’s lower than the lowest estimate among dozens of economists polled by Bloomberg.
The “U-3” unemployment rate the media fixates on held steady at 5.0%.
The “U-6” rate — incorporating part-timers who want to work full-time and folks who’ve given up looking for work in the past year — fell a touch, to 9.7%.
The real-world rate from John Williams at Shadow Government Statistics — U-6 plus all the people who gave up looking for work more than a year ago — held steady at 22.9%. The number has hovered near 23% since late 2012.
In light of the numbers today, the Street is all but counting out an interest rate increase from the Federal Reserve in June. But the Street is merely catching up to Jim Rickards. Jim pointed out here recently that the Fed no longer cares about the job numbers; it’s all about inflation, and inflation from the Fed’s perspective is moving in the “wrong” direction.

And now a 5 business travel alert: It took all week, but we’ve finally seen a cogent explanation why air travel has been a nightmare this spring and will only get worse come summer.
Maybe you’ve seen the headlines, but you couldn’t make sense of them. We sure couldn’t. The New York Times had a way-too-long story that practically put your editor to sleep.
Leave it to Cory Doctorow at Boing Boing to capture the essence of what’s going on. “The TSA gambled on millions of wealthy Americans opting out of its pornoscanner-and-shoe-removal process and signing up for its PreCheck policy, which allows travellers to pay for the ‘privilege’ of walking through a metal detector with their shoes on, while their laptops stay in their bags.”
The TSA went so far as to cut staff in anticipation of all these PreCheck signups — which never materialized. Here’s just one result of many — the scene a few days ago at Newark Liberty International Airport… 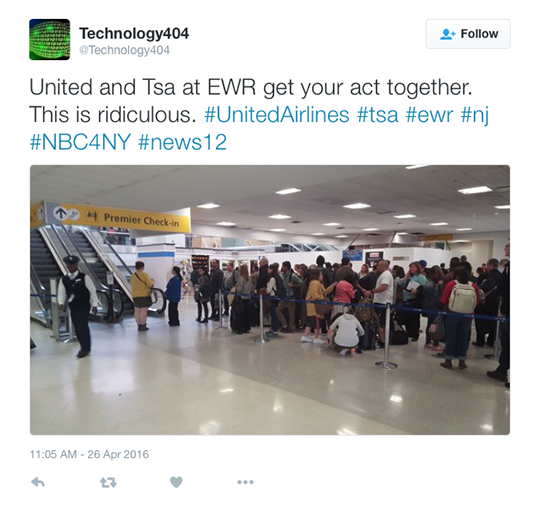 Bonus points for irony: To contend with the three-hour-long lines, the TSA is diverting personnel assigned to PreCheck… which is slowing down the PreCheck lines. PreCheck at Newark can take more than an hour now.

“If our government won’t free up dollars for Iran to buy American, they will doubtless buy elsewhere, harming American business,” a reader writes after yesterday’s episode.
“Or perhaps Boeing, etc., could accept payment in yuan, rubles, rupees, euros or some other currency.
“I suppose Obama could cut the companies off from all those lucrative government contracts. Maybe that would be a good thing for taxpayers, and without all the high-tech weaponry, we couldn’t engage in some of the future wars Mr. Trump is threatening if he wins the election.”
The 5: In a mildly ironic development, we see BP plans to open an office in Tehran this summer.
As you might already know, BP traces its lineage back to the Anglo-Persian Oil Co. It was that company’s assets that a secular and democratically elected Iranian government sought to nationalize in the early 1950s.
Winston Churchill, back in the British prime minister’s chair, prevailed on Washington to forestall this development by pulling off a coup; Teddy Roosevelt’s grandson Kermit was one of the operatives who made it happen.
The result was a quarter-century of brutal rule by the pro-U.S. Shah… and the backlash that resulted in the Islamic Republic come 1979.
BP joins two other oil firms angling for business in Iran — France’s Total and Austria’s OMV.

“The war on cash is over, and cash won,” writes a reader — taking the opposite position from Jim Rickards and Michael Covel.
“There is more cash in circulation than EVER. And there is no end in sight. And who cares what Summers or Buiter has to say? Do they pass the laws? Please name the politicians dumb enough to stick their head in the guillotine and say we need to abolish cash.
“According to the Federal Reserve Bank of San Francisco, 40% of young Americans (18–24) prefer cash over other forms of payment. And 28% of US households conduct some or ALL of their financial transactions outside of the mainstream banking system. Fully 21% of U.S. adults do not have a savings account. And 62% of U.S. adults have less than $1,000 in their savings account.
“Cash is still king. The best way to move cash is go to Wal-Mart and buy a money order up to $1,000 for 70 cents.”

“A cash ban will never happen in the great US of A.,” another writes. “The credit card industry will stop all efforts.
“We can go cashless when merchants and others accepting payment by credit card can offer discounts for using debit cards.
“The credit card is a cash cow for the banks, and they’ll prohibit discounts if they can.
Merchants’ expenses keep going up as card benefits rise.”
The 5: We do see a lot more gas stations pushing cash discounts these days — even franchisees of the big guys.

“I travel in sales,” a reader writes with a war-on-cash field report. “I went to Wal-Mart in Faribault, Minnesota, to get some doughnuts for a customer.
“I usually go through the self-checkout area. I pushed the start button and an alert said no cash accepted, cards only. I asked the clerk watching the registers if they don’t like cash anymore. She said no, only cards.”

“Hey, if and when interest rates go negative,” writes our final correspondent, “doesn’t it mean that when I overdraft my checking account, instead of getting charged a penalty like today, I will instead get a small bonus added to my account? Ha!”
The 5: Isn’t the typical overdraft charge today something like $35? Hmmm…
Have a good weekend,
Dave Gonigam
The 5 Min. Forecast
P.S. As we get ready to go to virtual press, gold is making another run at $1,300.
As mouthwatering as the idea of gold going to $10,000 sounds (see above)… what if there were a way to “juice” that gain even more?
A bold concept, to be sure. But we think there’s something to it. Come back on Monday and we’ll show you…