Dear Trader,
People hate stocks right now.
I talked about that in general terms last week, when we looked at how market participants were ignoring new all-time highs in the S&P 500 Total Return index.
But you don’t need to rely on how this market feels to figure out that investors hate stocks.
Instead, the short interest stats do a fantastic job of getting the point across. Total U.S. market short interest hit new multiyear highs in 2016, pushing its way to the highest sustained levels we’ve seen since the market crisis of 2008. No joke — investors haven’t hated stocks this much since the financial markets were melting down.
Have a look: 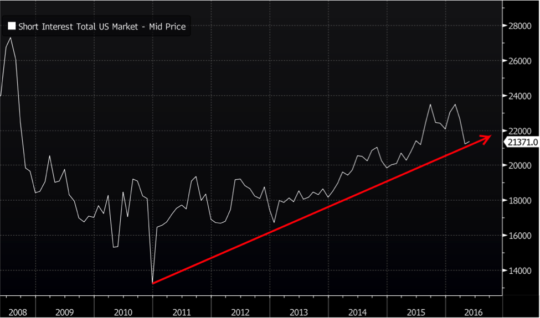 Even though short interest has backed off a bit in the last month or so, it’s still higher than at pretty much any time in the last seven years. And we’re currently in territory that was last seen in October 2008, the height of the crisis.
That confirms that people hate stocks right now. Not only that, but they’re actively betting on downside too.
Believe it or not, that’s actually good news for us.
Remember, short interest is reaching record levels at the exact same time that big stock market indexes are retesting all-time highs. Either the crowd is correctly picking a major market peak for the first time in history or a bunch of short sellers are about to get squeezed.
Obviously, the second option would be a very good thing for a trading strategy that’s built around following trends in short squeezes!
We’ve already seen an uptick in activity this past week. On Tuesday, we saw two trades trigger at once. And we can expect to see many more buying opportunities as we head into the summer months.
The short trade is getting crowded in 2016.
That’s typically a sign that there’s money to be made.

Finally, here’s a wrap-up of how our open positions are sitting heading into next week:
ZION October 2016 $25 Calls: We’re up almost 30% as I write on our ZION calls. This modest squeeze is proving to be a great way to trade the upside in banks as investors get excited about interest rates. And while bad employment numbers hurt shares today, as investors decreased the odds of a rate hike, the trend is still intact.
LRCX September 2016 $72.50 Calls: Our LRCX trade is also off to a solid start. We’re up about 20% in short order on this one — and shares are testing new highs this week.
TDC October 2016 $25 Calls: TDC is one of our new trades — and it’s off to a decent start despite a bit of a correction this afternoon. Stay tuned.
DO September 2016 $22.50 Calls: Our other new trade is DO. We’ve gotten hurt on this one a bit as oil prices have contracted, but the uptrend in the stock is still looking pretty strong, and our stops are still very much intact. I’ll let you know right away if that changes.
That’s it for today.
Have a great weekend,