It’s an article of faith in the halls of government and corporate boardrooms alike: If you want to “bury” bad news, you release it late on a Friday afternoon — and then go home.
Nosy reporters calling with follow-up questions will get only voicemail. Meanwhile, everyday people are gearing up for the weekend and paying less attention to the news. Website page views go way down. In the pre-internet era, newspaper readership was always lowest on Saturdays.
So if you have no choice but to reveal something uncomfortable, you do it at the close of business on a Friday. If it’s the summertime, when large numbers of people are on vacation, even better.

And so it goes with the “28 pages” — a classified section of the Joint congressional inquiry into the Sept. 11 attacks.
Both the Bush and Obama administrations have kept these pages under wraps for 14 years. “National security,” they’ve said. Hogwash, say congressional backbenchers who’ve read the unredacted document.
“There’s nothing in it about national security,” Rep. Walter Jones (R-North Carolina) told The New Yorker in 2014. “It’s about the Bush administration and its relationship with the Saudis.” It suggests evidence of a money trail between leading Saudi Arabian citizens and groups… and the 9/11 attackers. “How people were financed, where they were housed, where the money was coming from, the conduits that were used and the connections between some of these individuals,” said Rep. Stephen Lynch (D-Massachusetts) last year.
That’s as detailed as he can get, because the document’s still classified. But you get the idea — a massive double-cross by one of Washington’s most vaunted “allies.”
We’ve been writing periodically about the 28 pages for 18 months now. 60 Minutes brought them to widespread public awareness last spring. For the last few weeks, there’ve been signs the pressure from 9/11 families and survivors has become so intense that the feds are about to relent and release the document.

Yesterday, CNN and other outlets reported that release could come “as early as Friday.”
Why, of course. Even 60 Minutes is sure to bury its follow-up coverage of the 28 pages on Sunday, because it landed a joint interview with Donald Trump and his chosen running mate, Indiana Gov. Mike Pence.
Word of the likely release came before the awful attack in Nice, France — which is sure to consume what little media oxygen is available going into a summertime weekend.

And no wonder the powers that be want to bury it: “The very foundation of the U.S. government’s war on terror may be called into question,” writes Brian McGlinchey, director of 28pages.org — which has pressed tirelessly for the document’s release.
“Saudi Arabia is routinely praised by government officials and Saudi-funded think tanks as an important partner in fighting extremism; revelations that the kingdom may have aided the 9/11 attacks could in turn expose U.S. hypocrisy — particularly when juxtaposing the invasion of Iraq alongside continued arms sales to Saudi Arabia.”
[Note for new readers: If you’re wondering what any of this has to do with the economy or the markets, and why this topic’s been on our radar for 18 months, sit tight. We’ll get there…]

Sometimes, all attempts to bury bad news on a Friday come to naught: The news refuses to die. Indeed, it opens the door to new and even uglier revelations.
That might well happen with the 28 pages, say veteran observers of the Middle East.
“The secrets that Saudi Arabia has most interest in hiding may be rather different,” writes Patrick Cockburn of the London Independent, “and relate to allegations that between 1995 and 2001, two senior Saudi princes spent hundreds of millions of state funds paying off Osama bin Laden not to make attacks within Saudi Arabia, but leaving him free to do whatever he wanted in the rest of the world.”
Imagine the fallout if that double-cross became widely known.

But the biggest double-cross of all might be in the near future — an economic double-cross.
It comes back to a point Jim Rickards has been making since last fall. Going back to 2011, “practically every important currency in the world has devalued against the U.S. dollar. These include major economies and our trading partners. Canada, Australia, the eurozone, Russia and China have all devalued against the dollar in efforts to export deflation, boost exports and create jobs.”
The lone exception is the Saudi Arabian riyal — which is under immense pressure as oil prices remain mired below $50 a barrel.
The kingdom relies on oil for three-quarters of its revenue; with that revenue way down, the government is burning through its foreign exchange reserves at a blistering pace.
Devaluing the riyal might be the only way the kingdom can maintain the fuel subsidies, housing subsidies, government jobs and so on that the royal family uses to buy off their restive subjects.
Whenever that double-cross happens, it will rock markets around the world. But if you’re positioned properly, the move could mean gains of 530%… 848%… even 2,196%. Check out Jim Rickards’ recommended strategy at this link.]

To the markets… which are delivering a twist to the risk-on action of recent days.
The major U.S. stock indexes are stalling out this morning; at last check, the Dow and the S&P were nearly unchanged from yesterday’s record closes.
But the safe havens of gold and U.S. Treasuries continue to sell off. As we write, the yield on a 10-year T-note is 1.58%. Gold has shed a few more bucks and rests at $1,329.
With earnings season underway this week, the big banks are releasing their numbers. JPMorgan Chase beat expectations yesterday, and today it’s Citi’s turn. Of course, those numbers don’t take into account the $108 trillion in derivatives on their books, but who cares about that?

Not so hot was the Empire State Manufacturing Survey. This Federal Reserve measure of manufacturing in New York State is the first hint we’re getting of how the economy’s doing so far in July. At 0.55, it’s barely in positive territory.
And then there’s the consumer price index. If the Federal Reserve is looking for “moar inflation,” it’s not here — up 0.2% in June, less than expected. The year-over-year increase works out to 1.0%. Inflation might be ticking up at the wholesale level, as we saw yesterday — but not all of those increases are being passed along to the public.
As we always caution, any resemblance between the CPI and your own cost of living is purely coincidental.

From the “new taxes and weird fees” file: Pennsylvania hopes to close a budget gap with what one lawmaker derides as the “Pokémon tax.”
The Republican legislature and the Democratic governor came to terms this week on $1.2 billion in new revenue — including a digital downloads tax.
Yep, if folks in the Keystone State download a song or movie or an app, it’s now subject to the state’s 6% sales tax. The number crunchers figure that’ll be good for $50 million over the next fiscal year.
Conservative lawmakers from central Pennsylvania, typically hostile to tax increases, are hostile to this one too…

OK, so the hot new Pokémon GO app is free. But the label isn’t a bad way to draw attention.
[Ed. note: Pokémon GO is an example of “augmented reality” — which, along with virtual reality, is in line to grow into a $30 billion business by 2020. Ground-floor investing possibilities still exist, but with the phenomenal success of Pokémon GO, maybe not for long. Details here.]

“I’m curious,” writes a curious reader, “what Jim Rickards thinks about the prospect of the capital gains tax being raised on gold, silver and mining shares when the financial collapse takes place and how high they might go.
“The government will, of course, be busy confiscating everything they can get their hands on. I believe an outright confiscation of gold as happened in 1933 isn’t seen as a high possibility. Far easier is to tax the bejesus out of sales through capital gains. I guess the question of what people will be buying with any precious metals sales also comes into play. If PMs are seen as money and not a commodity, can they have capital gains?”
The 5: Jim’s addressed it before, but we’re happy to tackle it again. It’s an important question.
Yes, outright confiscation will be a nonstarter. The feds will resort instead to a “windfall profits tax” — perhaps as high as 90%.
That’s the bad news. Here’s the good news, straight from Jim’s latest book, The New Case for Gold: “A windfall profits tax on gold is not something that can easily be accomplished by executive order, because of congressional control over taxation. Such a tax requires legislation, and the legislative process is slow. Gold holders would know in advance and have time to prepare.”

“Here’s another example of the war on cash,” a reader writes on one of our ongoing themes.
“I was visiting a friend in another state, and I brought with me two small VA disability checks that I thought I could easily cash to pay for minor expenses. The local BB&T Bank would not cash the checks for me, even though I had three legitimate pieces of government ID, and the bankers would not allow me to make out the checks to my friend so he could deposit them and give me the cash.
“BB&T said it was company policy to not cash third-party checks, even U.S. government checks. The whole thing stinks.”

“I have been an avid fan of, and contributor to, The 5 for years,” a reader writes.
“BUT (for your new readers, these comments always have a qualifier) I am truly disappointed in your analysis of gold prices.
“How can you possibly be so absolutely sure that an announcement of the proportion of Jennifer Aniston not being pregnant didn’t affect the price of gold? Such smugness. Next, you are going to tell me that currency is better than gold, since gold has nothing backing it… (notice the ellipse).
“Keep it up, 5. We need real belly laughs wherever we can get them in these days.”
The 5: Rest assured we shall. Didn’t have too many today — didn’t feel right in light of the rotten news from overseas.
But as long as you brought up gold having “nothing backing it,” maybe our newer readers will enjoy one of our favorite video clips.
It’s from a local newscast in Calgary, September 2011… 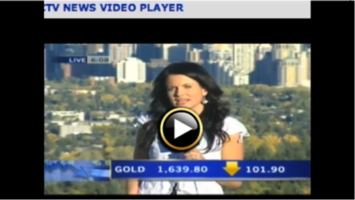 Ah, it never gets old…
Have a good weekend,
Dave Gonigam
The 5 Min.
P.S. We’ve always known the elite and the Deep State have their own agenda… but we never thought it was this sinister…
This four-page letter may finally prove it.
You see, one of America’s most powerful financial institutions was not happy with one of our editors.
He’s been sharing a message that could help thousands of Americans generate extra monthly income using one “scandalous” little trick.
BUT we don’t know how long we can keep this message online – so click here now.