And the republic’s descent into absurdity accelerates to warp speed… 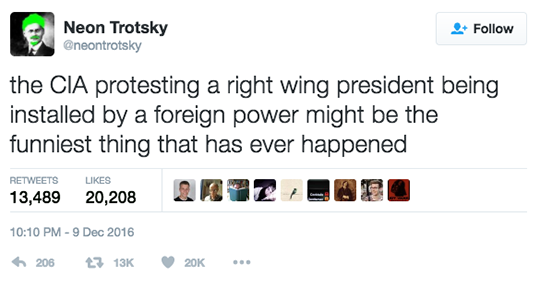 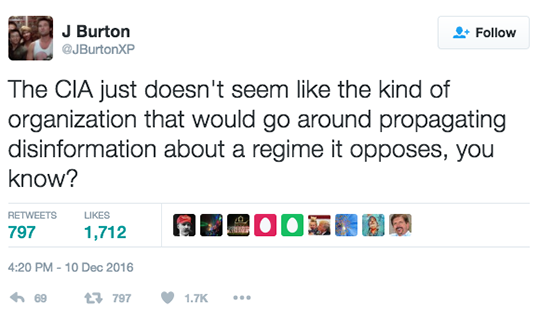 Moments after we went to virtual press on Friday afternoon, President Obama directed U.S. intelligence agencies to investigate whether and how Russia “hacked the election.” He wants a report on his desk before he leaves office on Jan. 20.
Which by itself, we suppose, is fine. “Obama is right to order a full review of Russia hacking claims,” tweeted The Intercept’s Glenn Greenwald a short time later. “The evidence should be made as public as possible.”
Heh… As if that’s how the establishment operates. Instead, mere hours after Obama asked for the review, The Washington Post breathlessly informed us “the CIA has concluded in a secret assessment that Russia intervened in the 2016 election to help Donald Trump win the presidency, rather than just to undermine confidence in the U.S. electoral system.”
And what evidence did the Post cite to back up this scandalous assertion? Zilch. “The key claims,” Greenwald wrote, “are based exclusively on the unverified assertions of anonymous officials, who in turn are disseminating their own claims about what the CIA purportedly believes, all based on evidence that remains completely secret.”
Sounds rock-solid to us!
The New York Times had its own story to the same effect, citing still other anonymous officials. It was too much for our own Jim Rickards… 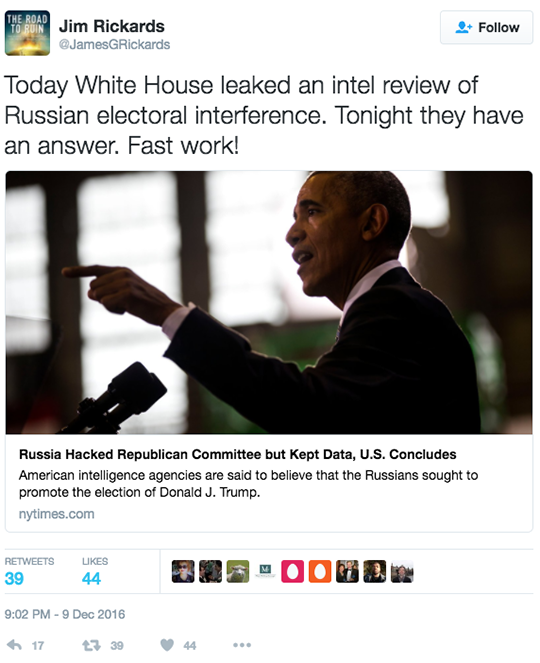 But the liberal Twittersphere needs no evidence to go full “birther.” Some are demanding a rerun of the election. Others are demanding the Electoral College — which meets one week from today — deny Trump a 270 majority and throw the election to the House of Representatives, which would (the theory goes) install Paul Ryan in the White House as a “responsible” alternative.

If there were any chance of an election rerun or a CIA coup abetted by the Electoral College, the Street would be sniffing it out and going berserk today… but that’s not what’s happening.

If the CIA doesn’t thwart Trump from taking office, other factors will certainly conspire to thwart the Trump agenda.
What little we still know about the Trump agenda was laid out by Steve Bannon — Trump’s Svengali, although the official title is senior counselor to the president — in an interview cited by The Wall Street Journal.
“One focus,” said the Journal piece, “will be a dramatic new public works building program that takes advantage of low interest rates — a project that Democrats have long favored. ‘It’s everything related to jobs,’ Mr. Bannon said. ‘The conservatives are going to go crazy. I’m the guy pushing a trillion-dollar infrastructure plan. With negative interest rates throughout the world, it’s the greatest opportunity to rebuild everything. Shipyards, iron works, get them all jacked up.
“‘We’re just going to throw it up against the wall and see if it sticks. It will be as exciting as the 1930s, greater than the Reagan revolution — conservatives, plus populists, in an economic nationalist movement.’”
As it happens, Trump’s economic team is loaded with figures from the Reagan era, like David Malpass, Stephen Moore, Larry Kudlow and Arthur Laffer.

Unfortunately for Trump, he inherits an economy far different from that Reagan did.
“Economic conditions were so poor when Reagan took office,” says Jim Rickards, “it’s likely the economy would have grown robustly in the mid-1980s with or without Reaganomics.
“Interest rates were 20%, and inflation was 11.83% in January 1981 when Reagan was sworn in as president. In effect, interest rates and inflation had nowhere to go but down.”
Jim also points out Reagan suffered through a recession at the start of his term. Trump, on the other hand, enters office with an economic expansion (such as it is) that’s getting long in the tooth.
But the most significant factor of all is this…

During Reagan’s time, the national debt — relative to the economy — was far lower.
“The debt-to-GDP ratio when Reagan took office was 35%, well below the long-term average from 1940–2016,” Jim explains. “Reagan was able to run large stimulating deficits and increase the debt-to-GDP ratio materially from 35% to 55% during his term in office without putting stress on U.S. borrowing capacity or credit. 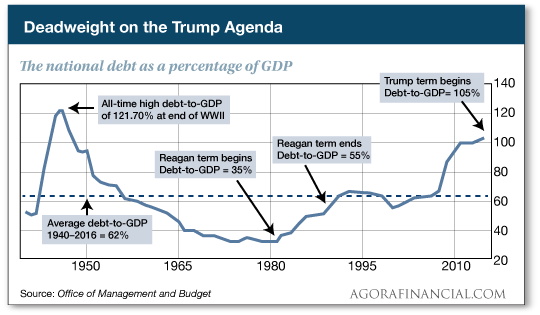 “Trump faces a debt-to-GDP ratio of 105%,” Jim goes on — “not far from the all-time-high of 121.7% reached at the end of World War II. Economists disagree on the exact level of debt-to- GDP where debt and debt servicing costs act as a drag on growth, but many estimates put that level around 80%.”
Circumstances now are also far different from that all-time high in 1945. “The debt incurred in 1940–1945 was used to fight and win World War II,” Jim reminds us. “At the end of that war, the U.S. was by far the most powerful nation on Earth. It possessed about 50% of global capacity in a wide range of manufacturing, mining, agricultural and transportation indexes.
“In effect, the U.S. received enormous earning power in exchange for the debt. In contrast, the U.S. has gained very little in exchange for the debt binge of the Bush 43 and Obama years.”

Bottom line: “A high debt-to-GDP ratio will act as a binding constraint on Trump’s capacity to pursue his big-spending plans,” says Jim.
“Reagan was working off a baseline with enormous spare capacity in labor and industrial output… Trump faces the prospect of diminishing marginal returns on new government spending and government debt…
“The U.S. is now at the point where even the ‘trillion-dollar’ plan envisioned by Steve Bannon may not have much impact on the overall economy other than inflation and another trillion dollars of debt. If the Trump tax cut and spending plans are inflationary, which is entirely likely given the resource constraints, inflation will translate into higher borrowing costs. This will add $100 billion per year to the deficit in interest alone.
“The Trump team faces the very real prospect of a ‘death spiral’ of higher spending, higher inflation, higher interest rates, larger deficits and still higher interest rates as investors dump Treasury debt in favor of hard assets such as gold.”
[Ed. note: That’s all longer-term. Short term, Jim sees up to 300% profit potential within 60 days from something he calls “the Trump trade.”
But this trade might well be a dead letter if you don’t act before the Federal Reserve raises interest rates on Wednesday afternoon. Jim shows you what “the Trump trade” is all about at this link.]

While we’re on a roll here… If one of Trump’s top advisers didn’t see the last financial crisis coming, what are the odds he’ll recognize the next one in advance?
As we mentioned on Friday, the No. 2 man at Goldman Sachs, Gary Cohn, has been named director of the National Economic Council.
The NEC was formed by President Clinton in 1993. It’s had 10 directors to date. The ones who come in with a new administration seem to have outsized importance…

At Goldman during the early 2000s, Cohn was a major player in the art of taking junky mortgages and packaging them up into AAA-rated securities to sell to gullible big-bucks investors.
Here’s a snippet of the apologia he gave Congress during a hearing in 2010: “Of course, we regret that we did not do many things better: like having less exposure to leveraged loans, which caused us approximately $5 billion in losses, having less exposure to mortgages, and, it should go without saying, we wish we had seen more proactively the effects of the housing bubble.”
Well, that inspires confidence. For the record, Agora Financial was sounding the alarm about housing in late 2004…

Really, when it comes to economic appointments, Trump could probably do a lot worse than this… 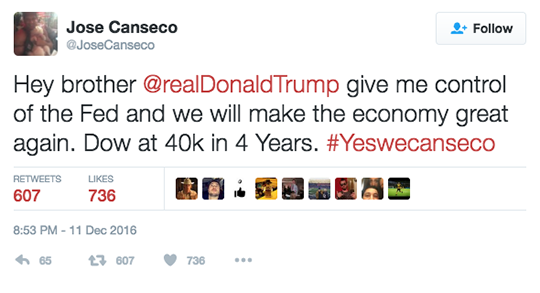 Yes, that’s José Canseco — the major-league slugger who blew the lid off steroid use in baseball. Until now it seemed his financial prowess was limited to himself falling victim to the housing bubble — he lost his home to foreclosure in 2008.
But it seems he’s acquired a following on Twitter this year for some reasonably accurate predictions. He said in February that gold would take off. He later said the Brexit referendum would tank the pound. In both cases, he got the call right, even if he overshot the mark with percentages.
“José Canseco is schooling us all right now,” said one of his Twitter followers — a finance manager at a Canadian health care firm — to The Wall Street Journal in August.
We’re struggling mightily to come up with something snarky to say. What’s the use at a time when liberals are falling all over themselves to accept the (purported) assertions of the CIA as gospel?

“Describing future SecDef Mattis as a ‘Russia basher’ is disingenuous,” a reader writes. “He is more likely a ‘Russia realist.’ Trump has done well to bring people in who will provide him some realistic informed perspectives on issues where he has demonstrated shallow opinions.
“Also, comparing global defense spending between countries is always a foolish game leading to false conclusions. Our labor costs alone prove the silliness of the comparison. We pay our troops a lot more than either Russia or China, and our cost per aircraft or ship is significantly more, too, even if we end up with qualitatively better items.
“For spending a whole lot less than us, Russia and China still field capable large armies and naval forces, even if they can’t project their forces beyond their own neighborhood. This metric may be a better measure of our inefficiency in buying bang for the buck.”
The 5: Mattis’ real antipathy might be for Iran — and it’s personal.
Politico magazine writer Mark Perry had an eye-opening piece a few days ago. It seems Mattis — and Marines in general — have long memories about the 1983 Marine barracks bombing in Beirut, Lebanon. That act is blamed on an Iran-trained suicide bomber. It killed 241 Americans, including 220 Marines.
In a speech last April, Mattis called Iran “the single most enduring threat to stability and peace in the Middle East.”
Not ISIS?
“I consider ISIS nothing more than an excuse for Iran to continue its mischief,” he said. “Iran is not an enemy of ISIS; they have a lot to gain from the turmoil that ISIS creates.”
Truth has truly become stranger than fiction as 2016 draws to a close…
Best regards,
Dave Gonigam
The 5 Min. Forecast
P.S. Want in on what Jim Rickards calls “my No. 1 way to profit from Donald Trump’s victory”?
Jim has uncovered what might be the most lucrative way to profit from Trump’s election victory we’ve ever seen.
According to Jim, it’s a chance of “huge rewards… in a matter of weeks…”
This trade is not what you’d expect. It does NOT relate to stocks, gold or commodities in any way. But the potential for the most lucrative gains on this trade could go up in smoke as soon as Wednesday.
So don’t wait, click to see it now.