So much for the “wisdom” of “financial professionals.”

“I’m not sure whether it’s a matter of incompetence or laziness,” says our income specialist Zach Scheidt. “But frankly, it doesn’t matter.

“And it all ties back to the piss-poor job that U.S. pension fund managers are doing.”

[For the easily offended: We realize we’re running afoul of the Presbyterian Standard set out years ago by Agora founder Bill Bonner: Don’t publish something you wouldn’t want your mother to read. On this day, even with one of the “seven words,” we choose to believe we’re bending the rule, not breaking it. Heh…]

“You would think,” says Zach, “that pension funds would be benefiting from this extreme bull market, right?”

Recall in December, Zach told us how traditional corporate pension plans are saddled with a $414 billion shortfall in the funds they need to pay retirees.

“But,” Zach tells us today, “instead of investing in the long-term bull market, allowing strong returns to make up pension shortfalls, pension fund managers have been underweighting U.S. stocks. 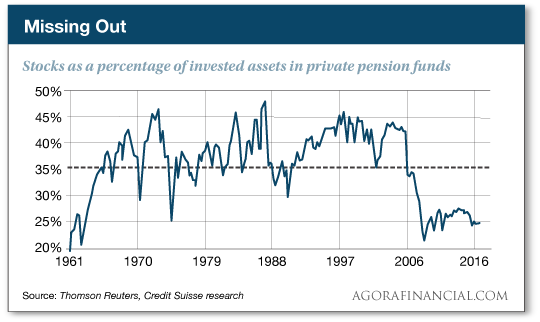 “Over the next eight years, not much changed. As the market plowed steadily higher, pension fund managers kept their portfolios conservative — allocating capital to things like Treasury bonds and ‘investment-grade’ corporate bonds that paid next to nothing.

“Remember, this is an eight-year period with interest rates at or near zero percent! What a horrible time to be invested in bonds!

If you think none of this affects you because you don’t have a traditional defined-benefit pension plan… think again.

We reiterate our point from December: Unlike your 401(k) or IRA… traditional defined-benefit pension plans come with a taxpayer backstop.

No, it’s not written into law, but it’s there nonetheless. The government’s Pension Benefit Guaranty Corp. — think of it as the FDIC of corporate pensions — is broke. Its liabilities are nearly double its assets. In the event of a crisis, Uncle Sam will step in to make up at least some of the pension losses.

Yes, the government’s broke too. But the alternative is mobs of angry pensioners and their families in the streets.

[Ed. note: If you’re keen to goose your retirement income — or for that matter, if you’re still working and you’d like more investment income — you can’t beat Zach’s perpetual income system.

It works best if you have at least $20,000 of capital to start with. From there, you can pull down instant payouts totaling hundreds of dollars. That’s money you can use for a couple of extra dinners out… or to plow right back into your portfolio. The choices are endless. See how a retired postman made the system work in two minutes when you follow this link.]

To the markets, where gold has rebounded nicely after a quick trip below $1,200. 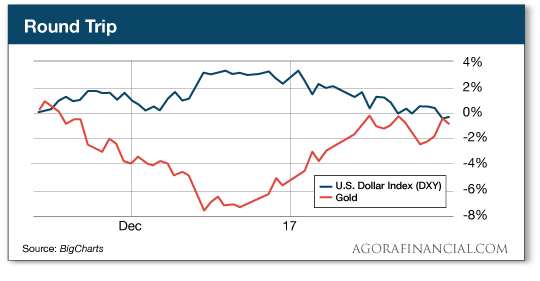 The major U.S. stock indexes are in the green, albeit barely. The Dow has inched its way past 19,900.

The Federal Reserve delivered no surprises in its policy statement late yesterday. The Fed was studiously noncommittal about when the next interest rate increase would come, but it was firm about plans to raise them sometime, by golly.

The scenario Jim Rickards spun out for us yesterday before the Fed statement remains in play.

The big earnings number is from Facebook — which is about to enter a third year of proving how much BS its users are willing to put up with.

A few years ago, there was a bear case against Facebook that went like this: As internet use transitions from computers to mobile devices, people will have less tolerance for ads hogging the smaller amount of real estate on a smartphone screen. And they definitely won’t put up with video ads that count against their monthly data limits.

In the spring of 2014, we pronounced this bear case dead and buried: Mobile accounted for 59% of FB’s revenue during that year’s first quarter — up from nearly zero at the time it went public in May 2012.

No, FB wasn’t a cheap stock, even then. But from then till now, the share price has more than doubled. The latest quarterly numbers continue to show mobile’s dominance: Mobile ads drove a 51% increase in revenue year over year.

Ray Blanco urged readers of Technology Profits Confidential to jump aboard FB last summer, mostly as a mega-play on virtual reality; it’s up nearly 13% since. Smaller players with an even bigger exposure to VR are doing even better… and Ray says several of them are still buys.

“Trump wants to light a fire under pharmaceutical innovation,” says the aforementioned Ray Blanco — picking up on one of our themes from yesterday.

In his meeting with pharmaceutical executives on Tuesday, the president hit out against both pricing and overseas manufacturing. “But along with Trump’s stick come some tasty Trump carrots,” Ray says.

“He told the Big Pharma execs that they would get their ‘products approved or not approved, but either way, it’s not going to take 15 years.’ He says the FDA will protect the people, but referring to the red tape in the application process, ‘instead of 9,000 pages, it can be 100 pages.’”

Ray’s inclined to believe that when it comes to Trump and reduced drug regulation, it’s personal.

“It disturbs him when he sees the FDA turn down drugs for terminally ill patients. He wants those drugs approved early by the FDA.

“We know the president’s son Eric Trump has worked to raise millions of dollars for children with cancer. The Donald himself donates to the American Cancer Society. His daughter, Ivanka, has helped support people with AIDS and HIV, as well as supporting United Cerebral Palsy.

“If a small company is in early trials but also has good data in one of these diseases, I can imagine a Trump FDA jumping on accelerating its availability. And if a recalcitrant FDA refuses to allow early use of such a drug in patients — particularly terminally ill children — it will end up on the wrong end of one of Trump’s infamous Twitter tirades.

“That’s going to be great for young, small, innovative biotech companies in the early stages of bringing breakthrough therapies in life-threatening diseases to the market.” Ray will continue to keep an eye out for the most promising prospects…

The NFL — what a bunch of stick-in-the-muds.

GNC, the brick-and-mortar retailer of nutritional supplements, was all set to debut its first Super Bowl ad on Sunday. As every commercial must do, it passed muster with the network carrying the game. But the NFL must sign off as well… and on Monday, it nixed the ad.

There was nothing salacious or outrageous about the ad. The problem wasn’t the ad, it was GNC itself. About 3% of its products contain DHEA or synephrine — which are on the league’s list of 160 substances banned for use by its players.

The irony is not lost on ESPN’s business analyst…

Hmmm. Maybe GNC will pull the trick Old Milwaukee beer did with Will Ferrell for a couple of years — buy a 30-second local spot during the Super Bowl in a tiny market like North Platte, Nebraska, and put it on YouTube. It’ll be a real “Super Bowl commercial” and get tons of exposure…

“I lived in San Jose until middle of last year, and I can tell you how many of the programmers from India are able to afford high rents,” reads the first of several emails on the topic of foreign-born workers in Silicon Valley.

“They are mostly single young males and they have four or five guys sharing a $3,000 two-bedroom apartment. They live in apartments near the Caltrain line, so don’t own cars. That brings the cost of living down to a pretty affordable level.

“Having said that, I also know tons of ‘American’ programmers working at the big Silicon Valley companies pulling down very nice salaries. The truth lies somewhere between.

“Love you guys, no buts about it!”

“On a number of occasions I have seen four adult males staying in one hotel room in the Bay Area (two queen beds, one bathroom) so they could pocket the extra per diem payment,” writes another.

“Created a pretty nice subsidy for their otherwise paltry salaries. And just to clarify, these guys are super-skilled at what they do — they just live in a country where they are paid 25 cents or less on the dollar, as compared with U.S. wages.

“So if you look at some of the ‘super-expensive Bay Area apartments,’ you are likely to see people stacked like cordwood in every room, closet and hallway.

“The reader that pointed out there are plenty of qualified American-born programmers and softdev engineers in Silicon Valley is precisely correct,” reads our next entry.

“In fact, I’m sitting in a softdev meeting right now led by an H1B visa recipient. So far, a process that should have taken no longer than 12 months — max — is now in its 38th month.

“I have teenage neighbors who could finish programming this basic piece of software in six months flat, but they won’t even do it for 75K a year, like an H1B visa will.

“So instead of hiring a well-qualified American trained engineer for the project, we were given an H1B who, to his credit, is nice as a cool breeze on a warm spring day, but to his discredit, uses twice as much time to produce barely average-quality work.

“High-tech companies, nonetheless, whine and complain there aren’t qualified engineers so they need to import Indian workers.  It’s complete nonsense. They simply don’t want to pay 125k a year for an American-trained engineer when they can get an Indian to do it for 50k less.”

The 5: If the foreign-born workers are really that incompetent, isn’t there some crossover point at which it becomes more profitable to hire U.S.-born talent, even at the higher salary? Or is it the Dilbert principle at work?

“Setting up and managing geographically distant code writing groups is getting easier all the time,” writes our final correspondent with another wrinkle.

“If U.S. companies aren’t able to hire programmers locally, or import them, they will set up foreign-based coding groups. Many companies have already done this.

“Because foreign-based software engineering groups usefully consume unrepatriated corporate income earned overseas… and… the resultant software code can be imported (emailed to the home company) for free (I think, anyway), foreign software coding for the U.S. company’s products is pretty good for everyone except the U.S. tax collector. I think we will see a lot more of this happening in the years ahead.”

The 5: Especially if the rumblings from Washington are true and the president plans to curb the H1B visa program. Imagine if he goes through with that and the promised profusion of jobs for American-born tech workers doesn’t materialize.

P.S. Thanks to an obscure Social Security contract just like this one, you could receive four deposits of as much as $6,880 in 2017…

No matter your age or income level… without having to pay extra taxes… and without affecting your Social Security checks.

If you act before April 21, you could be the next one to receive these deposits from the private sector.

You just need to put your name on the list of recipients. Click here to see how.