Trump might be the best master magician since Harry Houdini… because goodness knows he’s a master of diversion.

For instance, a big speech he gave yesterday to service members at MacDill Air Force Base, in Tampa. Follow the mainstream headlines and you waste your time. Look deeper into the speech for the real news and you’ll uncover what might be the best profit opportunity of 2017.

As you might be aware, Trump made a seemingly off-the-cuff remark about how mainstream media outlets “have their reasons” for failing to give adequate coverage to terrorist attacks. “The very, very dishonest press doesn’t want to report it.”

It was a nonsensical remark, red meat for his core supporters who get meaning from their lives by believing there are terrorists hiding under every bed. But the mainstream took the bait and spat indignation the rest of the day. “Media Covered Many of 78 Terror Attacks White House Said Were Underreported,” says USA Today. As if any amount of facts will change anyone’s mind…

Here’s the real news from the speech, though it won’t surprise you if you’ve been reading us the last six weeks: The president promised “a historic financial investment” in the U.S. military.

The details were thin. (This is Trump we’re talking about, after all.) But the broad strokes he painted were unmistakable: “We’re going to be loading it up with beautiful new planes and beautiful new equipment,” he told the crowd. “You’ve been lacking a little equipment. We’re going to load it up — you’re going to get a lot of equipment.”

The Defense Department wasted no time in following Trump’s cue — delivering a new budget request to Congress, asking for a $30 billion boost to the Pentagon’s core budget of $598 billion.

That was fast. Only 11 days ago, Trump issued an executive order giving the Pentagon 90 days coordinate with the White House budget office and draw up an “emergency” budget amendment for this fiscal year.

Top representatives from the Army, Navy, Air Force and Marines are testifying as we write this morning before the House Armed Services Committee, telling members that the spending restraints put in place by the Obama-Boehner budget deal of 2011 are putting them in a bind.

The chairman of the committee, Rep. Mac Thornberry (R-Texas) appears receptive to that message: “I think we have a great opportunity to do the right thing for the country,” he says. “I’m pretty optimistic that it will actually happen.”

Here’s the thing: This 5% increase to the defense budget can translate into much higher increases in the share prices of niche defense stocks. It’s happened before. It’s bound to happen again. We’re talking increases of 771%… or 938%… or much more.

Jim Rickards and his team have developed a system to identify which of these tiny defense stocks have the most explosive potential. And it’s open to readers like you right now. Click here and Jim will show you how it works.

Nearly every asset class appears stuck in neutral so far today. The Dow is up less than a quarter-percent at 20,093. (Gee, those “Trump policy worries” from yesterday must have faded.)

The 10-year Treasury yield hovers near 2.4%. Gold is holding on to nearly three-month highs at $1,233 as the dollar index steadies just above 100.

No big earnings numbers today. No big economic numbers aside from the trade deficit, which delivered no big surprise. No executive orders from the White House that we’ve heard about, either. In other words, it’s eerily quiet…

“Gold has posted gains of 6% through the first week of February for the second year in a row. In both cases, gold bounced off a late-December bottom. And in both cases, the gold rally dipped in late January — only to rocket to new highs at the start of February.

“That’s where the real action begins…” 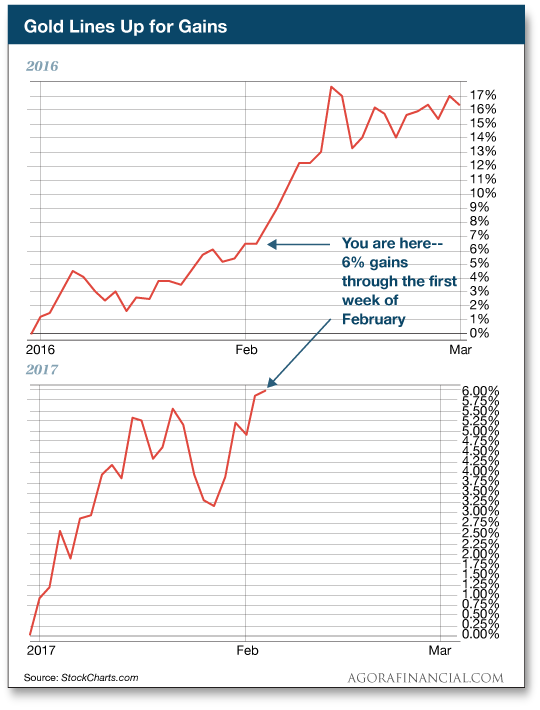 “If gold continues to mirror its 2016 advance this year, we’re in for a strong month that could deliver double-digit gains before spring arrives.”

China is inching closer to the dreaded “maxi-devaluation” forecast by Jim Rickards.

The Middle Kingdom’s total foreign exchange reserves have dipped below $3 trillion for the first time since 2011. 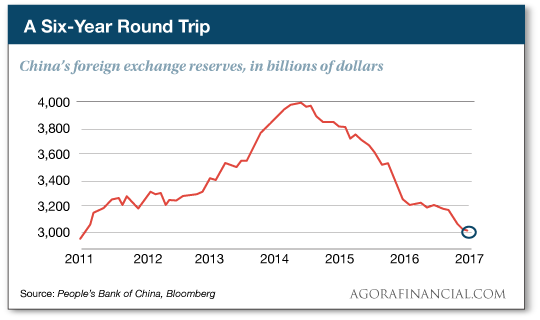 And so China is still raiding its reserves to prop up the yuan. As a reminder, here’s why that matters. China’s used up $1 trillion of its reserves since mid-2014. About $1 trillion of what remains is tied up in hedge funds and other investments that are hard to sell in a hurry. And still another $1 trillion will be needed to bail out Chinese banks during a liquidity crunch.

So even though the chart says there’s still $3 trillion left, in reality it’s only $1 trillion. Unless the downslope of that chart is arrested, Jim says China will be broke by year-end. Arresting the free fall in January was a start — but only a start. Jim’s still counting on an overnight devaluation by China of 10% or more, “sooner rather than later.”

“One of the most common pediatric cancers also happens to be one of the deadliest: brain cancer,” says Ray Blanco on the science-and-wealth beat.

“The most common form of brain cancer is glioblastoma. It’s also one of the deadliest. In children, the five-year survival rate is a depressing 20%.”

Ray is following one effort to combat the disease, not with drugs — but with electricity. The patient wears a device on the head that bathes the brain in alternating low-intensity electrical fields.

“Brain cells tend to divide only rarely compared with other bodily tissues,” Ray explains. “Tumor cells, however, divide rapidly. The electrical field interferes with the alignment of cellular structures during cell division. This disruption kills the cell while it is trying to gestate its evil twin.”

The device is already approved in adults… but not children. But the results of long-term trials might be about to change that. Ray will continue to follow the story in his FDA Trader service.

As legal marijuana comes to the fore, perhaps American law enforcement can expect more of what just happened in Australia.

On Saturday, a woman called police in the sparsely populated Northern Territory to complain her dealer had just jacked up prices. “Outrageous,” she said, according to the police agency’s Facebook page.

As it happens, weed is still illegal in the Northern Territory — possession of less than 100 grams can lead to fines of up to A$200.

Police tried to squeeze more details out of her, but then she realized she might be incriminating herself and hung up. Nonetheless, the cops spotted an opportunity: “If you know a drug dealer who is ripping you off, give us a call,” says the Facebook post. “We’d love to help.”

[A not totally unrelated aside: During your editor’s long and undistinguished TV news career, one of the strangest viewer phone calls I fielded was when I worked in Denver during the 1991 Gulf War — from a woman who was beside herself that a retailer was charging $3 a roll for Saddam Hussein toilet paper and insisted we do a story about it.]

“Still confused after all these years,” writes a reader paraphrasing Paul Simon.

“Rickards talks of a China maxi-devaluation — and presumably a market crash — yet in yesterday’s 5, Zach Scheidt is talking up a Dodd-Frank rollback leading to the banks flying — which presumably would lead the markets up.

“Which way to go? It can’t be both. I guess you’re saying XLF goes up until the maxi-deval?”

The 5: At the risk of repeating ourselves, we don’t tell our editors to toe a “company line.”

The downside is that editors will contradict each other sometimes. But the upside — and we think it’s considerable — is that editors are free to speak their minds as long as they don’t use the seven dirty words (most of them, anyway) and they don’t get us involved in any really interesting litigation.

But we’ll also answer your query in a more direct way: For what it’s worth, Dan Amoss of our macro research unit has not recommended put options on the big banks in any of the premium services helmed by Jim Rickards and David Stockman.

Seeing as Dan led readers to a 462% gain with put options on a dying Lehman Bros. in 2008, we take that mighty seriously. There are plenty better “shorting” opportunities out there than the banks right now…

“Every time I hear of the big banks having all this excess cash,” writes a reader after yesterday’s episode, “I get ‘mad as hell’ and think back to the 2007–2008 shearing of the taxpayers.

“There should have been prosecutions and prison sentences handed out instead of bonuses and bragging about saving the ‘world’ and ‘You should be thanking us for legally robbing your citizenry, Ms. Liberty!’

“What a short attention span the people possess. Can you say ‘Glass-Steagall’?

The 5: We recall Trump on the campaign trail talking about reinstating Glass-Steagall. But with all those Goldman Sachs alumni surrounding him now, we’re not holding our breath…

“I was in the local Wal-Mart picking up my medicine,” begins our final correspondent, “when, as I was leaving, I happened to notice at least a dozen large cardboard boxes each sitting on a pallet.

“That meant that whatever they were, they were pretty heavy. I walked over and looked for what the packaging said that they were, thinking that they might be new backyard BBQs or something like that, but didn’t see any markings on them.

“I asked the nearest employee what they were and was informed that they were automated scanners. Then the employee looked around to see if any other employees were nearby and said to me quietly, ‘I’m worried about my job here.’ I would be too if I had a job that automation could replace…

“There’s a word that describes something that stays the same when everything around it is changing, and that word is extinct.”

The 5: On the one hand, that’s progress.

P.S. One of our leading analysts believes Trump is set to unleash an $11.1 trillion tsunami in the markets…

This is your chance to turn a small stake of $100… into a life-changing fortune.