Another day, another all-time high for the Dow and the other major U.S. stock indexes. But that’s hardly the whole story… 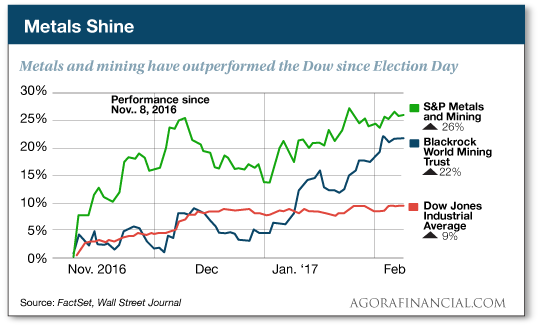 “The metals and mining sector has been on a tear recently,” says our income specialist Zach Scheidt. “Just look at the returns of metal and mining stocks compared with the broad market for the last few months.”

And little wonder. For instance, as we write this morning, the price of copper has reached $2.77 a pound — another high last seen in 2015.

“This trend will continue as Trump’s new economic policies are implemented,” Zach goes on.

After all, it’ll take copper and other industrial metals to build out all the roads and bridges and airports the president envisions.

Even if there are roadblocks to the Trump agenda — an eventuality forecast by several of our other editors — it could be months before that realization sets in. Right now, perception matters more than reality: “Markets have responded with economic activity picking up and stocks trading higher.

“One of the downsides of this activity is that inflation will, naturally, pick up,” Zach goes on. And inflation is very good for gold prices.

“That’s because investors buy gold as an alternative to dollars, in an effort to protect the spending power of their wealth.

“Another benefit for gold investors is that Trump’s administration has been actively ‘talking the dollar down.’ Trump knows that a strong dollar makes it difficult for U.S. manufacturers to sell their products overseas. So the administration is looking at policies that can keep the dollar’s strength under wraps.

“A stable (or potentially weaker) dollar also helps the case for gold. Since it takes more ‘weak’ dollars to buy an ounce of gold, investors have another incentive to buy precious metal as a hedge. And that’s great news for gold miners.”

[Ed. note: All that said, everything you know about gold could change today. But only if you watch this video right now. For reasons you’ll see when you watch, we’re taking it offline tonight at midnight.]

Can’t blame it on dollar strength; the dollar index is nearly steady — a shade below 101.

Meanwhile, the Dow is up another 115 points; only 15 points more and the Big Board will crest the 20,400 level. The market cap of the S&P 500 surpassed $20 trillion for the first time this morning.

Crude is off nearly 2% and back below the $53 level. But the longer-term picture is more bullish: Researchers at IHS Markit say discoveries of new oil and gas fields are now at a 60-year low.

“The slowdown in exploration success shows that the world is likely to become increasingly reliant on ‘unconventional’ resources such as U.S. shale oil and gas to meet demand for energy in future decades,” says the Financial Times. Good news for the U.S. shale patch — which has been hurtin’ for certain since oil prices began tumbling in mid-2014.

While the Beltway crowd obsesses over whether National Security Adviser Mike Flynn is about to be cashiered… a White House firing days ago is flying under the radar.

On Feb. 2, the White House’s chief information security officer was escorted from his office. His name is Cory Louie; President Obama appointed him in 2015 to protect the staff closest to the president from cyberattacks. No one’s made an announcement yet; as of this morning, his LinkedIn profile says he still works there.

While the few mainstream reporters onto the story engage in baseless speculation, our Ray Blanco places the story in its investment context: “Recently, an executive draft order outlining President Trump’s cybersecurity outlined his administration’s strategy for defending of our cyber infrastructure and capabilities.

“Trump intends to hold each Cabinet secretary responsible for the cybersecurity and agency head accountable for what happens to the cybersecurity of the organizations under their watch.” Perhaps showing Louie the door underscores the point.

“Trump also wants a greater degree of accountability for the myriad of companies that contract with the federal government. This is going to spur further cybersecurity spending, which will be very good for our cybersecurity picks in Technology Profits Confidential.”

Hmmm… First came India’s cash ban. For a follow-up act, there might be election tampering.

A quick refresher: Three months ago, India’s government banned the largest and most widely used bank notes, the 500- and 1,000-rupee notes, roughly equal to $10s and $20s in the United States. Indians were required to bring their cash to a bank, where it could be deposited in a digital account or converted to other denominations.

“Of course, the real purpose was to flush out the cash and slap tax liens on anyone who did not have a satisfactory reason for having cash in the first place,” Jim Rickards reminds us. “The entire Indian economy was thrown into chaos. Banks were closed, ATMs had to be reprogrammed, businesses shut down and money riots broke out in some places.”

Over the weekend, voters in India’s largest state — Uttar Pradesh — went to the polls. It’s the first test of the move’s popularity, or lack thereof: How badly will it hurt the BJP, the ruling party of Prime Minister Narendra Modi?

We won’t know the answer for another month. India’s elections take place in weeks-long stages. But someone leaked an exit poll from the first round and it ended up on a website run by the company that owns the country’s biggest Hindi-language newspaper. That’s an act banned under Indian election rules. And wouldn’t you know it, the poll shows BJP in the lead.

An attempt to influence subsequent rounds of the election in favor of the BJP? Say it ain’t so!

Meanwhile, the cash ban has descended into farce — with India’s wealthiest celebrities swearing off cash.

They appear in a ubiquitous TV commercial saying, “We are the soldiers of our new economy. We pledge to use less cash to make it available to those more needy in our villages.”

Hundreds of millions of poor and rural Indians were hit hard by the cash ban. They didn’t have bank accounts… much less smartphones to manage a bank account digitally. But they had to turn in their cash like everyone else. Thus, a push for the wealthy to go cashless to ease the cash shortage and make the transition a little easier.

Nor is that the only PR push, says today’s Wall Street Journal: “Earlier this month, a motorcycle gang more than 30 riders deep roared to a stop in front of a sari store in a busy shopping district of India’s capital and unfurled banners. ‘What will we make India?’ shouted the leader. ‘Cashless!’ answered the rest.”

As we mentioned last month, the German journalist Norbert Haering has uncovered convincing evidence the India cash ban is a scheme largely made in America. The United States Agency for International Development joined forces with the likes of the Gates Foundation and the major credit card companies to spring this enormous experiment on 1.25 billion human guinea pigs.

It’s hard to shake the thought that the motorcycle riders are compensated in part by USAID — meaning you, dear taxpayer.

[For American readers: Don’t rule out the possibility that the India experiment is a warmup before a similar scheme is sprung on you and me. Indeed, Jim Rickards has unearthed indications that such a move is in store — and sooner than you might expect. We urge you to check out his expose at this link. There’s no long video to watch.

Read it now… before the “soldiers of our new economy” start polluting your TV.]

“I wish you people would quit hawking this ‘piggyback’ scheme,” a reader writes.

“According to my research, it is illegal and prosecutable.

“The minister in charge of the Canada Pension Plan system states the program is only available to those that have paid into the system. Anyone caught using the piggyback idea will be prosecuted to the full extent of the law.

“I dare you to print and explain this.”

The 5: Gosh, we’ve been singing the praises of “piggybacking” Canada’s version of Social Security for nearly two years. By now there ought to have been tens of thousands of Americans who’ve been extradited to Canada, put on trial and tossed in the pokey.

That’s not to say we haven’t generated a certain degree of controversy by showing Americans this technique to generate up to $4,700 in income per month. But for anyone who’s not familiar with what we’re talking about, we encourage you to examine the technique for yourself.

“Can you expand on your remark last week on physical gold?” a reader inquires.

The 5: By all means. It’s old hat to us, but we have large numbers of new readers who are just discovering the allure of gold and gold investments.

We said, “The physical gold you own must be either in your own possession… or that of a trusted depository. A gold ETF like GLD doesn’t cut it. Otherwise, you could wind up in a world of pain and disappointment.”

There’s physical gold and there’s “paper gold” — futures, options and ETFs. In theory, that paper gold is backed by an ounce of physical metal. In reality, there are at least 100 ounces of “paper gold” for every ounce of the real thing. At one point last year, the number was as high as 500. An ETF like GLD doesn’t even promise that you can trade in your shares for real metal.

That’s the setup for a scenario that years ago we labeled “zero hour” — a time when a panic hits the gold market. Demand for the real thing far outstrips the paper vehicles. The price of real metal in your hand shoots far higher than the quoted price on CNBC’s ticker.

In a nutshell, that’s why we prefer real gold — either in your own possession or a trusted depository. The one we trust is the one we’ve been working with for nearly five years now — Hard Assets Alliance. Our own Jim Rickards has developed a recommended metals allocation based on your net worth. No matter how large or small, there’s something just right for you. Learn more by following this link. In the interest of full disclosure, we might be compensated once you fund your account. But we wouldn’t recommend Hard Assets Alliance if we weren’t impressed by the work they do.

P.S. Last chance: We will send no more reminders today, so if you missed the announcement earlier, we reproduce it below:

We knew this day would come…

At midnight tonight, our urgent gold message will be pulled from the web.

Click here NOW before that happens. I don’t want you to miss out.

P.P.S. If you follow along with our daily missives, YOU KNOW how we feel about gold. That’s why this urgent gold message is so important. That’s why I’m advising you to take action before MIDNIGHT tonight. Click here to watch now.