We’re going to talk about gold today. But not in the way you’re accustomed.

We won’t talk up gold’s timeless role in preserving one’s hard-earned wealth. We won’t rehash how it protects you in both inflation and deflation. Nor will we dive into how central banks and commercial banks jerk the price around to suit their purposes.

“In the biotech arena,” says our Ray Blanco, “gold has the potential to do much more than protect wealth. Gold will create wealth… and make investors rich.

Here’s something you might not know about gold: “Gold has the ability to take up and hold proteins on its surface,” says Ray.

“This makes it an excellent delivery vehicle for a variety of biotech-related applications. It can carry everything from genes to stem cells… yet gold is relatively inert and isn’t rejected by the human body.

“Gold’s chemical configuration has been capturing the imagination of biomedical researchers. It is being closely studied in university labs around the world. One day, it might even help cure cancer. Some of the research appears to be taking place in secret… perhaps to prevent heists.”

No kidding: In late 2012, a few dozen pounds of gold dust vanished from a Pfizer research lab in the St. Louis suburbs.

At the time, it was valued at $700,000. Pfizer had bought it the year before. The company did not disclose what it was doing with the gold. “This is just one of the materials we use in our proprietary research,” said a spokesman.

If the gold’s been recovered since then, it’s not apparent from a web search.

Gold is about to transform the diagnosis of a disease that’s maddeningly difficult for doctors to get a handle on — prostate cancer.

By the time a man reaches age 70, he stands a 1-in-8 chance of a prostate cancer diagnosis.

Note we didn’t say an “accurate” diagnosis. The conventional PSA test — that’s short for “prostate-specific antigen” — has serious problems. A few years back, Dutch researchers pored over the medical records of 162,000 men. They concluded PSA screening lowers your lifetime cancer risk by a not-so-whopping 2.4%.

“Its predictive value is poor,” says Ray. “Many times, patients will have elevated PSA numbers but only have a benign situation. Elevated readings, however, mean a transrectal biopsy of the gland is necessary to be sure. This is not only unpleasant, but it can result in adverse events, like infection and bleeding.

“Some 1.2 million biopsies are performed in the U.S. yearly, and more than half of them could be avoided with a more accurate test. That’s hundreds of millions of wasted dollars from both unnecessary biopsies as well as resulting complications.”

Now imagine a rock-solid reliable PSA test in which a technician takes a drop of blood from your fingertip and puts it in a palm-sized machine, where it’s mixed up with a tiny amount of fluids containing gold and silver. And you get the results in 10 minutes.

Not just prostate cancer screening, although that’s the most promising avenue right now — but everything.

“Instead of waiting days or weeks for an expensive blood test done at a centralized lab, you will be able to have an answer to your health-related question in a matter of minutes. And despite the high price of the Midas metal, it will be cheaper than what’s available today.

“Since early detection is key to curing many diseases — including cancer — this gold-enabled diagnostic technology will help save countless lives.”

Years from now, it’s possible this application of gold could even serve up a cancer cure.

But you don’t have to wait years to reap the profit potential of this gold-infused liquid. In fact, Ray sees a catalyst coming up before the first quarter is over. That’s the end of this month.

To the markets — where all of a sudden traders are coming around to Jim Rickards’ view that the Federal Reserve is certain to raise its benchmark fed funds rate two weeks from today.

Yesterday morning, the trading action in fed funds futures pointed to only a 35% probability of a March rate increase. Then several Fed pooh-bahs delivered “hawkish” speeches, including power broker New York Fed chief Bill Dudley. This morning, the market is pricing in a 71% probability.

Between that and a Trump address to Congress last night that was paper-thin on specifics but nonetheless got the mainstream swooning about how “presidential” he looked, here’s how the major asset classes are shaping up as we write…

[Heads up: Further down in today’s episode of The 5 there’s a picture that some readers might find mildly disturbing. But it’s hard to tell the story without it. Consider yourself warned…]

There’s nothing in the economic numbers today to deter the Fed from raising rates in two weeks.

The ISM manufacturing survey for February clocks in at 57.7 — well above the “expert consensus” and the strongest reading in more than two years. Again, we caution the ISM is a “sentiment” survey; real-world figures on the factory sector remain soft.

“Core PCE” — the Fed’s favorite measure of inflation — rings in at 1.7% year over year. That’s still shy of the Fed’s 2% target, but the Fed will take solace that it’s holding steady and not sliding down.

Personal incomes grew 0.4% in January, but consumer spending rose at only half that pace. Here again, real-world data aren’t keeping up with upbeat measures of how consumers “feel.”

Indeed, it’s an ominous sign for retailers that they’re not sharing in the stock rally today. At last check, XRT — one of the big retail ETFs — is off half a percent.

And that’s on top of the 3% it shed year to date before today’s open. 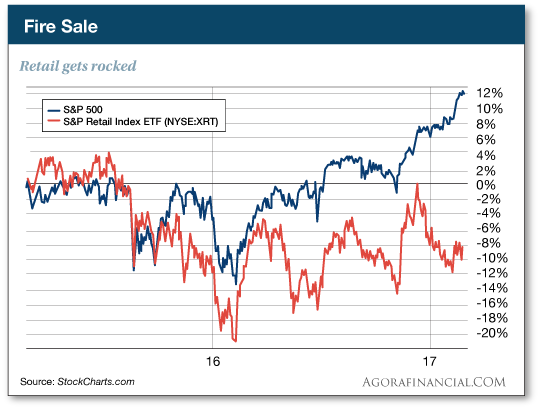 Best Buy’s quarterly numbers delivered a surprise miss on sales. Target missed on earnings and delivered a grim outlook for 2017.

We’re not counting on a recovery either: A few weeks ago, the veteran retail analyst Howard Davidowitz said the United States has three times more retail square footage per capita than any other Western country. Yikes…

Yes, for real consumer-product inspiration these days you have to go online. [Here comes that mildly disturbing picture we warned you about.] 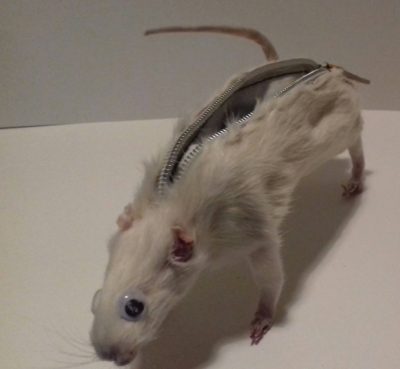 With the usual apologies to Dave Barry, we swear we’re not making this up…

An enterprising British college student named Jack Devaney says he hit on the idea while working part time in a butcher shop. In his off-hours, he taught himself taxidermy, experimenting with frozen mice and rats sold as snake food at pet stores.

After mice and rats, he moved on to squirrels, moles and rabbits. “I get them from pest control and estate managers,” he tells the Plymouth Herald. “I basically posted on Facebook asking for help and I had people getting back to me within 10 minutes.”

He started selling his pencil cases on Etsy and the rest is history. “They’re most popular in America, but I’ve also sold them in Norway.”

At current exchange rates, Americans are forking over $43 plus shipping.

Thus, he considers his venture only a hobby. “You’d have to be a nutter to think you could make a living out of this.”

To the mailbag: “Yesterday, you linked to an ‘underground’ health care system,” a reader writes. “But when you go to that link, you discover that the enrollment period for this ended on Jan. 31.

“Has it been extended? If not, why link to it?”

The 5: Apologies all around for the confusion.

You can join up this “underground” health care system at any time. But naturally, you’ll maximize your savings if you ditch your current insurance plan — which typically you can do only during the open enrollment period. For some people, that window ended on Jan. 31 — but it varies. And of course, if you’re in the workforce and change jobs, that counts as a “qualifying event” in which you can cancel your current insurance.

“Dave, that’s a great description of The Donald’s current ‘relationship’ with the mainstream media!” writes one of our regulars after we characterized it as “toxic” and “codependent.”

“The same thing also seems to be true of his interaction with Congress.

“An interesting theory about why he’s doing this has emerged from the noise. President Trump has correctly identified that the public’s approval ratings of both entities has never been lower. By taking them on at every opportunity, in effect, he’s aligning himself with us.

“So there may be more to it than bluster and snark on Trump’s part. He could be using a ‘common foe’ strategy. Pretty savvy, no?

“Christopher Cole of Artemis Capital Management seems to agree. In a December 2016 letter to shareholders titled Volatility in the Age of Trump, he makes a compelling point: ‘Stop underestimating this man — you don’t become leader of the free world through stupidity and luck. The rants and Twitter storms are part of a strategy of media control and distraction.’”

The 5: There’s undoubtedly a grain of truth to that. In the event the stock market starts to go south because Trump’s economic agenda is stalled in Congress, he can and will lay the blame on Congress and get away with it.

As we pointed out last year, only 6% of Americans tell pollsters they have “a great deal of confidence” in the media — about the same as Congress.

For whatever it’s worth, these kinds of surveys usually tell us the institution that retains the highest confidence of the American people is… the military.

We’re certain Trump knows that too…

P.S. Despite the market roaring higher after Trump’s speech last night, one of our leading analysts says there’s still time to cash in.

This is your chance to turn a small stake of $100… into a life-changing fortune. Click here to find out how.