It’s the first halting step toward executing the ambitious Trump economic agenda. House Republicans have drawn up their plan to “repeal and replace” Obamacare… 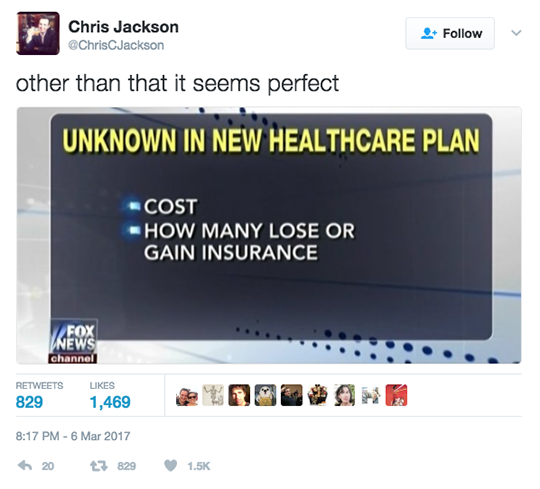 Until last night, the only people with access to the bill were members of the House Energy and Commerce Committee and their staffs. They had to read it in a special viewing room and couldn’t take a copy with them. Other members of Congress were kept in the dark.

Heh… Given the paucity of details, why all the secrecy?

We won’t thrash over all the highlights; you can read that anywhere. We wish only to examine it in the context of David Stockman’s ongoing forecast — utter chaos in Washington that will make it impossible to enact any of Trump’s economic agenda, whether it be Obamacare repeal, tax cuts or infrastructure.

It’s true that you wouldn’t be subjected to a penalty — er, excuse us, the Supreme Court said it’s a “tax” — for failure to buy health insurance.

That could prove far more expensive than the penalty.

Meanwhile, state governments will be slowly bankrupted as Washington stems the flow of money for Medicaid. Federal payments to the states will rise no faster than the bogus inflation rate… even though the states’ Medicaid costs are growing at a far faster clip. As a reminder, Medicaid is the biggest line item in most state budgets.

And then there’s the black box with the costs, and who will and won’t be covered.

Under normal circumstances, the Congressional Budget Office would help clarify such matters with a thorough analysis of the bill — “scoring,” the process is called. But word from Washington is that the architects of this bill don’t plan to submit their bill for scoring.

“That means,” writes Peter Suderman at Reason, “that neither the public nor congressional legislators will have any real idea of what the likely effects of the bill are even as they are debating its merits.”

You mean they’ll have to pass the bill so we can find out what’s in it? Imagine that!

These manifest flaws in the bill — never mind that it does nothing to, you know, lower costs — doom it to defeat.

Already, GOP backbenchers in Congress are slamming it as “Obamacare Lite” and “Obamacare 2.0.”

“It’s Obamacare in a different format,” says Rep. Jim Jordan (R-Ohio) of the House Freedom Caucus. The Atlantic reminds us that “the full Freedom Caucus comprises about three dozen members of the 237 in the House Republican majority. If they voted as a bloc, they could sink the bill on their own.”

At this rate, “it will take the GOP a full year or even more to get a heavily diluted version of Obamacare Lite to Trump’s desk for signature,” says David Stockman.

“During that legislative ordeal of shuffling the deck chairs on the medical care Titanic, the rest of the fanciful Trump Stimulus — sweeping tax cuts and an infrastructure boom — will fall by the wayside, thereby assuring a financial crash and renewed plunge into recession.”

[Ed. note: That might happen sooner than nearly anyone expects. As David’s been reminding us for three months now, the debt ceiling comes back into force one week from tomorrow. Trump and a fractious GOP Congress will have to come to terms on raising the debt ceiling before anything else gets done.

Later this week, David will lay out an investment strategy to deal with the “carnage” he anticipates. But in the meantime, we urge you to get a FREE copy of his book Trumped! — where he explains how the president needs to “make 10 great deals” if he hopes to drain the swamp. Click here to claim your copy.]

To the markets, where yet again nothing seems to be catching a bid.

The key economic number of the day is the trade deficit — which swelled in January to $48.5 billion, in line with the “expert consensus.”

“Perhaps as early as next year, your bank or investment manager could be managing your money with blockchains,” says our trend forecaster Gerald Celente.

Maybe you’ve heard about the blockchain as the accounting-system backbone of the “cryptocurrency” Bitcoin. But Gerald says the blockchain is also the next step toward the cashless economy, beyond the debit card. “Groups ranging from Wells Fargo to the London Stock Exchange are getting ready for a blockchain-based future.

“A blockchain is a series of pieces or ‘blocks’ of digital data, chained together by computer code. A block may be a transaction, such as a check you write. Or it could be an integrated group of transactions, like your monthly banking statement listing all debits and credits. A chain is a series of blocks linked sequentially through digital code. Usually, a chain orders its blocks chronologically, though there are other ways to group or sequence the blocks.

“No bank needs to clear your checks or provide your balance. No notary public needs to vouch for your signature on a contract. No Treasury is needed to issue ‘legitimate’ currency. Blockchains define their own purpose and their own measures of value and keep their own accounting.”

You can see why banks are keen to co-opt this technology, no? “Almost everything a bank does — keeping deposit accounts, making loans and taking payments — could be done via blockchains,” Gerald goes on. “So banks are scrambling to figure out how to bring blockchain technology in-house and remain relevant in a financial system lurching through major changes.”

Already, Bank of America’s been granted 15 patents on blockchain applications. JPMorgan Chase has invested $2 billion to figure out how to monetize the blockchain. Overseas, UBS, Barclays and Deutsche Bank are also hard at work.

“Blockchains are good for much more than logging payments,” says Gerald. “They can be used to validate the security of anything with value.

“Gem, another blockchain entrant, has partnered with Capital One and health care giant Philips to smooth and speed payments for medical insurance claims. With providers, insurance carriers and banks using different processing platforms, payouts can take weeks. Gem’s blockchain-based system creates a common platform among all involved. The shared system also assures each entity that the claim is valid and that previous steps in the process have been completed.

“Using the blockchain’s options, people could decide who may see their medical records. People could even have ready access to their own records, instead of wrangling with a doctor before getting a look.”

In short, “Blockchains will transform the way we exchange value in our digital, cyber-insecure future,” Gerald concludes. He and Ray Blanco already have a blockchain-themed recommendation in their premium advisory, Breakthrough Technology Alert. They’re keeping an eye out for others in the entry-level newsletter Technology Profits Confidential.

This time, it appears RadioShack really is circling the drain.

RadioShack Corp. filed for bankruptcy just over two years ago — the occasion for much reader reminiscing here in The 5. But it didn’t disappear altogether.

Instead, it closed about half of its 4,000 stores and sold most of the remaining ones to a creditor — which then teamed up with Sprint to form a new company called General Wireless. “The deal created 1,400 co-branded locations with Sprint, plus several hundred franchised units,” says Bloomberg.

Yeah, it still didn’t work. Maybe RadioShack could’ve hung on by returning to its hobbyist roots and catering to the “maker” crowd. Instead, it tried to soldier on as just another cellphone store, or an alternative to Best Buy if you wanted to overpay for an HDMI cable. Now Bloomberg says General Wireless is also looking to file for bankruptcy… and this time it could end in liquidation.

Already, we see anecdotal reports on message boards of “Store Clearance — 20–30% off entire store.” Managers are telling customers it’s to clear inventory to make way for new products… but the customers know better.

And now for a strange entry in the annals of legal marijuana — “weed gummies” as a midday pick-me-up.

Bloomberg tells the story of Green Lion Partners — a venture-capital outfit in Denver that bankrolls cannabis-related companies. Its chief Jeffrey Zucker — not to be confused with the guy who runs CNN — says the weed-infused candy contains 5 mg of THC and boosts both his focus and creativity.

As it happens, 5 milligrams or less is what’s increasingly finding its way into brownies, mints, etc. Case in point — Terra Bites, a candy made by California-based Kiva Confections. They’re chocolate-covered espresso beans with 5 mg of THC. 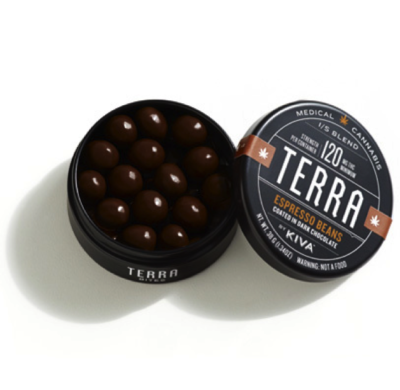 Also available in blueberry milk chocolate, according to Kiva’s website…

“In a small amount,” says Kiva marketing director Christie Strong, “people are finding they are having more focus, instead of that typical cannabis experience when they’re a little distracted and hazy.”

There’s even a name for it — “microdosing.”

We’re sure that as legal marijuana continues its spread across the nation, we’ll be hearing more stories like these. But it’s still dicey to invest in “penny pot stocks” unless you know what you’re doing. Fortunately, Ray Blanco has cracked the code behind the extreme moves in these stocks and devised a trading system. You can learn more about it at this link.

[Random thought: If the other Jeff Zucker smoked some dope, CNN might be watchable now and then.]

“I think some of the problems the GOP is having with the Affordable Care Act come from its success,” a reader writes.

“Several million Americans know they or someone they know doesn’t have to die because they can’t afford health insurance.

“Doing it cheaply is one of those messy details Congress doesn’t like to consider.”

The 5: You’ve identified a key part of the problem. As we’ve said before, the GOP doesn’t want headlines going into the midterm elections next year about “X Million People Lose Health Insurance.”

Even if it’s crappy and expensive insurance…

It’s so rich… so valuable… that a single deposit of it could soon be worth $69 billion or more.

The best part? You can claim a share of the profits for as little as $9.