In Only Seven More Days…

It’s T-minus seven days until the Ides of March.

Three events kick in, all on Wednesday, March 15, all with the potential to upend global markets…

We’ll tackle the Dutch election later this week or early next. The debt ceiling, we’ll contend with tomorrow.

Today, though, it’s all about the Fed.

Yes, we’re tired of talking about the Fed too. We’ve been tired of it for years. But the Fed’s influence on markets and the economy is undeniable. There’s a reason Fed imagery showed up more than once in Trump’s two-minute “closing argument” commercial before the election.

“Markets suddenly woke up to the fact that the Fed is going to raise interest rates on March 15,” says Jim Rickards.

Of course, if markets had been paying attention to Jim, they’d have been expecting that ever since the Fed last raised rates in December. Oh, well…

“The cause-and-effect is simple,” Jim goes on. “Higher rates = a stronger dollar = a lower dollar price for gold, all things equal. The only thing that was surprising was that it took markets so long to figure this out.

“Market expectations of a rate hike (as reflected in fed funds futures contract prices) jumped from 30% to 90% in a matter of four trading sessions based on a concerted wave of speeches by Janet Yellen, Lael Brainard, Bill Dudley and a thundering herd of regional Federal Reserve bank presidents. This was coordinated, by the way.

“Gold has been quite resilient in the face of higher rates, a stronger dollar and a bubbly stock market. This means there are positive supply-and-demand factors supporting gold independent of the strong dollar connection described above. Those positive factors will continue to play a role.”

Here’s the thing: Usually, the Fed embarks on a rate-raising cycle because the economy is improving and inflation is taking off. But not this time. “The Fed is raising rates not because the economy is strong,” says Jim, “but because they’re desperate to raise rates high enough so they can cut them enough to cure the next recession, which could start any day.”

O the irony: “In the course of raising rates to prepare for the next recession, the Fed may cause the recession they are preparing to fight.

“At a minimum, the rate hike will slow the economy, and possibly sink the stock market.”

And then? The Fed will start jawboning about easing monetary policy again — maybe suggesting a pause in the rate-raising cycle. That could easily happen at the Fed meeting in early May. At that point, “gold will be off to the races again,” Jim tells us, “recover recent declines and move back toward the $1,300 level and higher.”

In any event, there’s another date this month that has Jim’s attention — Monday, March 20. He describes a “rare gold situation” that has nothing to do with the Fed or the dollar. A similar situation in the past delivered a historic gain of 5,379%. Check out the short 60-second video Jim just made to bring you up to speed.

If gold isn’t rising today, neither is anything else. No, this is not a repeat from the last four trading days.

As we check our screens, the Dow has dipped below 20,900. The S&P 500 is also in the red, although the Nasdaq is squeezing out a minor gain.

Bonds are selling off, pushing yields higher. The 10-year Treasury is approaching 2.57% — the highest level since late last year.

The economic numbers of the day are as follows:

As Jim is wont to remind us, productivity is one of those things that drives the economic growth that generates the tax revenue that keeps the government solvent…

Silicon Valley is scrambling to respond to the WikiLeaks revelations about the CIA’s spying capabilities.

To the extent the mainstream is playing up the story at all, it’s the old news about how the CIA can turn Samsung’s “smart TVs” into listening devices. (Some of our Laissez Faire readers have been on to that story for months.)

And mainstream attempts to get to the bigger story have been positively negligent: Casual news consumers might have gotten the idea yesterday that the CIA has cracked encrypted communication apps like Signal and WhatsApp.

Not true: The CIA cracked the operating system of Apple and Android phones, allowing access to everything on the device. Assuming your device hasn’t been compromised, Signal and WhatsApp are still doing the job they’re supposed to; don’t stop using them because reporters at The New York Times got careless.

So far, Apple has been the most forthcoming in its response:

“Our products and software are designed to quickly get security updates into the hands of our customers, with nearly 80% of users running the latest version of our operating system.

“While our initial analysis indicates that many of the issues leaked today were already patched in the latest iOS, we will continue work to rapidly address any identified vulnerabilities.”

Samsung could only offer a pro forma “We are aware of the report in question and are urgently looking into the matter.” Ditto for Microsoft; turns out the CIA can crack Windows too, if it wants.

Any news about government surveillance capabilities — or private-sector data breaches — tends to drive cybersecurity stocks higher. Check out this chart going back to Edward Snowden’s revelations in June 2013… 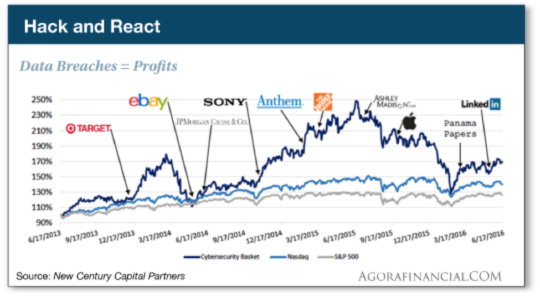 Sure enough… with the WikiLeaks revelations, the most widely traded cybersecurity ETF is notching its first meaningful up day all month.

The PureFunds ISE Cyber Security ETF — ticker symbol HACK — is up a half percent as we write. For True Alpha editor Louis Basenese, it’s his favorite way to play the sector. He’s looked high and low for individual stocks that his readers can ride for a couple of years, or even a few months — and he doesn’t like anything. Better, he says, to play the field with an ETF.

“Unfortunately,” he explains, “the cybersecurity industry is incredibly fragmented, with more than 3,000 vendors operating in it. What’s more, the number of cybersecurity companies — and therefore, the number of investment opportunities — are multiplying like gremlins in a swimming pool. In the last five years alone, venture capitalists poured $12 billion into the industry, hatching another 1,200 companies.

“As if too many choices didn’t make the investment situation complicated enough, we also have to contend with rapid product cycles. Since attack methods constantly change, so must the defenses. Yet no single company can be expected to stay on the cutting edge for long.”

HACK solves the problem. Louis calls it “a dynamic investment that adapts with the ever-changing cyber landscape.”

[Ed. note: Louis has a long list of small-cap stocks set to soar during 2017… and he’s eager to tell you about five of his favorites. But it’s best if you act before the end of April — for reasons he explains at this link.]

A sharp-eyed reader wishes to draw our attention to a new form of online dissent — specifically, some memes with a common theme… 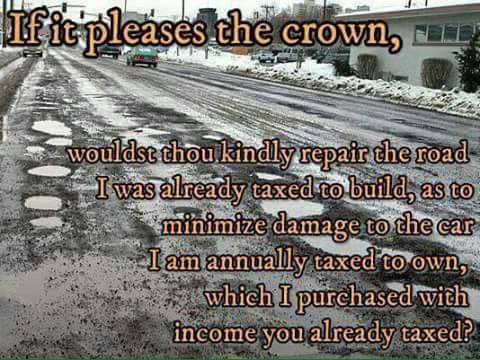 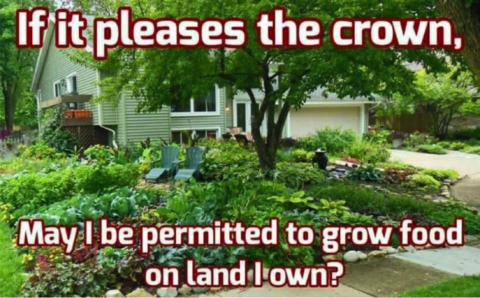 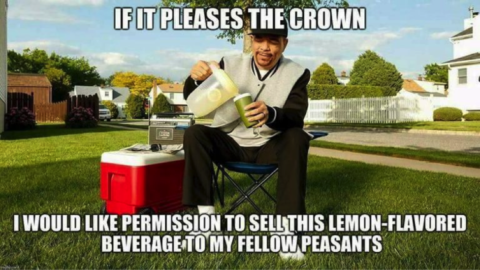 It resonates with this reader because for nearly five years, he’s been alerting us to local lawmen’s heavy-handed enforcement of business-permitting laws as applied to kids’ lemonade stands.

But we have to say this phenomenon is interesting, including the harkening back to British rule of the American Colonies. “The formula of the meme is simple,” writes Carey Wedler at The Anti-Media: “It begins with ‘If it pleases the crown’ and is followed by an articulation of an absurd government policy that violates freedom on a fundamental level.”

Other policies that get slammed in these memes include bans on feeding the homeless and the seemingly ubiquitous habit of police officers shooting dogs if they “look threatening.”

But why now, we wonder? And why do the petty tyrannies depicted in these memes happen exclusively on the local level?

On the topic of RadioShack’s impending demise, this time for sure, a reader writes…

“RadioShack’s apparently lame choice to peddle cellphones across their base of excessive store locations instead of focusing on their raison d’être — being a great hands-on source for common, unique and rare electronic hardware and, um, radios — is as baffling to me as the failure of Kodak to embrace and lead the natural progression to digital camera technology.

“So what does it take to get a job as a CEO these days? In these cases of shortsighted failure, apparently, forward thinking and knowing the ins and outs of lean-and-mean niche domination are not requirements for the job? Or perhaps it is the board members to blame?

“In any case, I am so thankful for The 5 for doing their best to keep me posted and well informed at a very fair price!”

“I propose a two-tier system where government mandates basic health care at affordable rate,” writes a reader in response to our Obamacare-repeal musing yesterday.

“Strong on prevention and managing conditions to keep patient able to work. Optional catastrophic coverage: You buy separate insurance if you are just trying to live longer, and if you don’t have the insurance, or if you can’t pay cash, you aren’t allowed to run up the charge to be dumped on others. Important to have cost controls on all supplies and services.”

The 5: Sounds as convoluted as Paul Ryan’s plan to “fix” the convoluted Obamacare.

If it pleases the crown, may we propose a free-market system whereby a woman could deliver a baby in a deluxe private room for $478 — which is the inflation-adjusted price today for what California’s Santa Monica Hospital charged in 1952?

Of course, a system like that would destroy the insurance companies, Big Pharma and the so-called not-for-profit hospitals. Can’t have that now, can we?

P.S. Even though Trump has never released his tax return… he filed a little-known document before his election.

And you won’t believe what we found on Page 47.

This could soon become the next big Trump story.