We daresay we left you hanging yesterday, dear reader.

We drew some broad strokes outlining the parallels between the stock market at the peak of the dot-com bubble in 2000… and the stock market now going into next week’s Federal Reserve meeting. Today we need to fill in some details.

To recap… The Federal Reserve has finally embarked on a new cycle of interest rate increases. Typically, the third increase of a cycle triggers a big downswing in the stock market. The third increase of this cycle will come at the Fed’s March meeting next Wednesday. The pattern is so predictable that decades ago an economist named Edson Gould gave it name — “three steps and a stumble.”

The pattern is positively spooky… and right now the most eerie parallels are with the dot-com bust. The third increase in that rate-raising cycle came on May 16, 2000.

You remember those days, right? Retail investors lured by the siren song of CNBC were piling into names like Pets.com, eToys and Webvan. The fact those companies were losing money? That didn’t matter — in the “new economy,” what mattered were clicks and eyeballs: The money would surely follow.

But it never did. The Nasdaq index, laden with tech stocks, tumbled 75%… 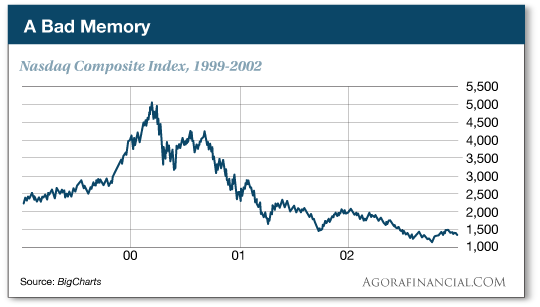 What’s past is prologue… and that brings us to the IPO this month of Snap Inc. (SNAP).

Snap is the creator of Snapchat. “One of the principal concepts of Snapchat,” Wikipedia explains, “is that pictures and messages are only available for a short time before they become inaccessible.” This “disappearing” thing is all the rage with the kids.

“At its peak moment last Friday,” says our David Stockman, “Snapchat’s market cap weighed in at $40 billion. That gave it a bubblicious valuation of 100X sales and $20 million per employee.”

As we check our screens a week later, Snap’s market cap has slipped big-time… although it’s still a rather lofty $26.4 billion… 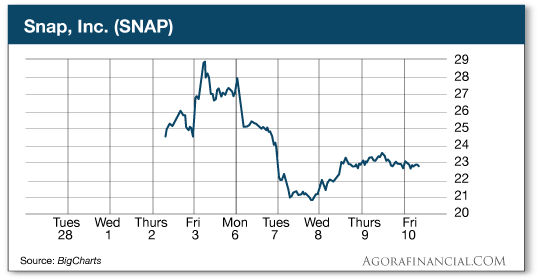 Hmmm… That’s $13.6 billion of market cap that’s vanished. Fitting, David says: “After all, disappear is what Snapchat does. At its peak last Friday, each of its average 2.5 billion daily snaps were valued at $16 per daily snap. Now these 15-second ‘engagements’ are being valued at, well, just $11!

“We believe that the Snap IPO was the clanging bell at the top this time around,” says David.

Nor is that the only bell sounding.

From today’s Wall Street Journal: “Corporate executives are buying their own firms’ shares at the slowest pace in at least 29 years, the latest sign of uncertainty as the bull market in U.S. stocks enters its ninth year.”

According to a firm called the Washington Service, there were only 279 of these insider buys in January — the lowest total since 1988, when Corporate America was still spooked by the 1987 crash.

There’s a Wall Street saw about how corporate insiders will sell their company’s shares for any number of reasons — a kid’s college education, a divorce settlement, a midlife-crisis Ferrari — but they buy for only one reason: They think the price will go up.

If insiders aren’t buying, that betrays a lack of confidence the price will go up, no?

In short, David believes the Fed’s rate increase next Wednesday will be the swift kick that sends the market over the cliff.

But it’s not all grim: It was possible to make fortunes during previous “three steps and a stumble” episodes. Consider what happened to a dot-com darling called CMGI: You can mark the day of the three-steps Fed meeting on May 16, 2000… and from there CMGI shares tumbled 98%.

Still, it was possible to execute a trade before the shares crashed that could have generated a gain of 977%.

That’s the opportunity before you now.

If you’re still skeptical, we understand. David has put together a compelling series of charts to show you how this pattern has played out in the past… how smart investors played it for huge gains… and how you can do it for yourself this time. Don’t wait until the Fed meeting next week, though: Give it a look right now for maximum profit potential.

To the markets… where the reaction to the monthly job numbers reinforces David’s thesis that we’re near the top.

After the number came out, Dow futures leaped 100 points. But as we write, the Big Board is slightly in the red on the day at 20,845.

Treasury rates have backed down a bit; gold is holding the line on $1,200, if barely.

Hmmm… So is there something in the job numbers to indicate a fly in the ointment?

Not really. As noted above, the wonks at the Bureau of Labor Statistics conjured 235,000 new jobs for February. The unemployment rate dipped a bit to 4.7%. More people are returning to the labor force. Wage growth is now 2.7% year over year. The average workweek held steady.

The only thing we can surmise is the numbers were so strong, traders are getting itchy about another Fed rate increase come June. This morning, Fed funds futures are pricing in a 51% probability of that happening.

Well, you heard it here first.

Mnuchin laid out that goal on Feb. 23. The market should have screamed higher that day, but it didn’t — because Mnuchin didn’t offer any details of what would go into that plan. David Stockman said here in The 5 the Trump administration has no hope of pushing a tax bill through Congress — not with a $20 trillion national debt.

And he said that with the authority of someone who did help push a tax bill through Congress during Ronald Reagan’s first year in office — in time for the congresscritters’ summer break, no less.

The Dow is only 100 points higher today than it was when that tax promise fell flat on Feb. 23.

Once again, we’ll urge you to heed David’s warning about what’s in store for the market when the Fed makes its move next Wednesday. You can see it right here.

The good news: The Trump administration is looking to cut funds for the TSA’s useless “behavior detection” system. And yes, there’s bad news. We’ll get to it.

As we mentioned a couple of years ago in one of our periodic business-travel alerts, there’s a long list of everyday activities that can get you singled out for extra harassment at the airport. They include making eye contact with TSA agents… and not making eye contact with TSA agents. As we mentioned last month, the ACLU sued for TSA documents that reveal even the TSA doesn’t believe this system can root out terrorists.

But no, the program won’t go away: To make up for the cuts, The Associated Press reports the White House wants to jack up the $5.60 “security fee” for a flight by $1. Good grief…

On the subject of the new internet meme “If it pleases the crown,” a reader writes…

“Look at it this way. The government is full of control freaks who are themselves unproductive. Combine that with education and news media that are full of people who are unproductive. In order to justify themselves, they have to cultivate a feeling of superiority toward the ‘peasants.’

“They appear to resent the fact that ordinary people can do things to take care of themselves. In other words, they want to feel superior because they are in many ways quite inferior. On top of that, they lie constantly and are hardly aware of it. It’s OK to lie if it’s for a good cause, and the good cause is whatever they want at any given moment.”

The 5: Ah, the “good cause.” That’s what makes the mainstream embrace of all this Russia nonsense so pernicious.

A while back, I made the casual remark that while I’m neither truther nor birther, I have no problem with people who are: To the extent that such folk delegitimize whatever regime is in power at the time, they perform a valuable civic function.

But the Trump-as-Putin’s-puppet kookery is a whole other thing… because the mainstream is spouting it in service to the existing power structure, what they see as a “good cause.”

[Having said that, we can’t wait for the letters accusing us of being Trump fanboys again. Heh…]

Finally, our item yesterday about cannabis treatments for aging pets got one of our readers thinking about another recent oddball topic…

“Why can’t the Texas Department of Agriculture be more creative? If feral hogs present such a nuisance as claimed, then maybe the state should legalize cannabis for medical and veterinary use. As a result, a possible scheme may present itself that may help to fill the state coffers.

“The Texas Department of Health can chime in and declare the critters to be possible carriers of swine-borne illnesses that may affect the general public. In order to assess the situation and prevent a possible health crisis, officials can demand an immediate roundup of the pugnacious porkers. A pilot program can then be formed, in conjunction with Texas A&M University, to experiment with developing the most effective types of nonlethal bait containing — you guessed it — veterinary-grade cannabinoids. A key component to the bait would be microdosing with the optimal amount of THC, which, in theory, could leave the hirsute hams sedate enough for capture.

“Congressional representatives get to lobby Washington, D.C., for research grants; Texas A&M can appeal to their alumni for additional endowment funding; the governor can beseech biotechnology startups in that ample profits are to be made from the manufacture and distribution of cannabinoids; the Department of Agriculture can issue cannabis-growing permits, which also cover harvesting and quality control; etc.

“The big payoff: Only after passing health protocols can the porcine patients be released to hog farmers, who, after losing their stock due to Texas wildfires, can be replenished by state donation. These farmers could revolutionize the industry with marketing ‘wild-caught hemp-fed hogs.’ This could become a new culinary staple in top restaurants as well as barbecue pits throughout Texas and beyond.

“Those government apparatchiks may deem these hogs to be a nuisance, but I see an opportunity. Otherwise, I must be smoking something… oh, well… dooby-dooby, doo…” 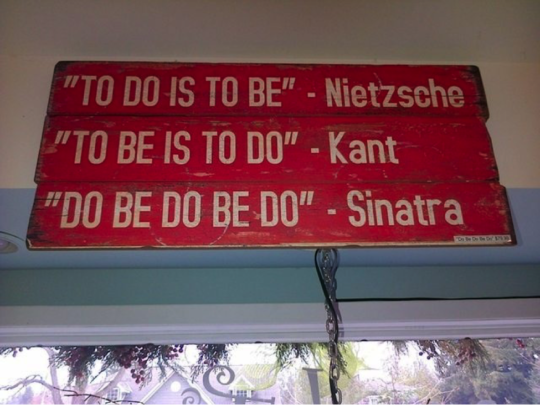 No, we won’t vouch for the veracity of the quotes today. Once again, it’s been a long week…

P.S. Have you heard about the new “instant gold” technique than can pay out millions?

Seriously. As much as…

It has to do with a hidden gold market with the potential to churn out millions of dollars every week in cash payments. You could take a payout this Tuesday and take home real gold if you wanted to! Yet the technique (and how to make money) is known by almost no one. You can see it here.

Watch it today, while there’s still HUGE money to be made.