One hundred years ago today the U.S. Senate voted to declare war on Germany.

Two days earlier, President Woodrow Wilson asked Congress for that declaration; two days later, the House followed the Senate’s lead. Wilson had won re-election less than six months earlier on the campaign slogan, “He kept us out of war.”

Scholars like the Cato Institute’s Jim Powell and Buffalo State historian Ralph Raico have made a compelling case that U.S. entry into World War I was the single-most disastrous decision taken by a U.S. president — before or since.

Absent U.S. entry, the war would have likely ended in stalemate and a negotiated settlement. There would have been no punitive Treaty of Versailles that bankrupted Germany and fueled the resentment that gave rise to Hitler. The post-Czarist Russian government would have retained broader public support with an earlier end to an unpopular war. The 20th century would have been spared the scourge of Naziism, Bolshevism, World War II and the Cold War.

Fifty years ago today, Martin Luther King performed what might be his most fearless act of dissent — his speech in New York denouncing the Vietnam War.

“A true revolution of values will lay hand on the world order and say of war, ‘This way of settling differences is not just.’ This business of burning human beings with napalm, of filling our nation’s homes with orphans and widows, of injecting poisonous drugs of hate into the veins of peoples normally humane, of sending men home from dark and bloody battlefields physically handicapped and psychologically deranged, cannot be reconciled with wisdom, justice and love.”

The conspiracy-minded, perhaps not without reason, suspect Dr. King signed his death warrant with that speech; in their telling, the Deep State of that day was willing to play ball on civil rights… but not on winding down the military-industrial complex. King was shot and killed a year to the day after his speech.

On this day the Trump administration seeks to expand its involvement in a Middle East war — with no input from Congress whatever.

Defense Secretary James Mattis is asking the White House to lift restrictions on U.S. military support for Saudi Arabia’s unspeakably cruel war in Yemen. “The United States wants now to play a bigger role,” writes the constitutional scholar Jonathan Turley from George Washington University, “but notably, the military is asking permission not from Congress but the president. It is his call. That is precisely what the Framers wanted to avoid.”

A small bipartisan contingent of Congress members has written a letter to the president, which it will send today. “Engaging our military against Yemen’s Houthis when no direct threat to the United States exists and without prior congressional authorization,” the letter states, “would violate the separation of powers clearly delineated in the Constitution.”

The nostalgia is touching. Unfortunately, that ship sailed in 1950 when Truman sent U.S. troops into Korea with no say-so from the legislative branch.

And then there’s the irony of the F-35 fighter jet — the most expensive weapons program in U.S. history.

Even before he took office, the president was taking credit for badgering Lockheed Martin to lower that cost, at least a bit. Last month, Lockheed CEO Marillyn Hewson said that credit is deserved. “He helped accelerate that along, and I think he put a sharper focus on price and how we drive the price down,” she said.

Too bad the F-35 still isn’t combat-ready after nearly a quarter-century of development.

The report is scathing, once you cut through the bureaucratic verbiage: “If used in combat,” Gilmore wrote, “the F-35 aircraft will need support to locate and avoid modern threat ground radars, acquire targets and engage formations of enemy fighter aircraft due to unresolved performance deficiencies and limited weapons carriage availability.”

State of the art!

The F-35 Joint Program Office acknowledges the problems Gilmore’s report uncovered. Alas, “there’s no indication that the office has any plan — including cost and schedule re-estimates — to fix those currently known problems without cutting corners,” says an analysis from the nonprofit Project on Government Oversight.

Here again the naiveté is touching. This is government we’re talking about. Whether the F-35 can survive in combat isn’t the point. The point is to sustain “a permanent war economy,” in the words of a 2012 paper from George Mason University.

“The permanent war economy continuously draws resources into the military sector at the expense of the private economy, even in times of peace,” wrote economists Thomas Duncan and Christopher Coyne. As a Time magazine account of the paper said, “The military-industrial complex has turned into what some in the Pentagon call a ‘self-licking ice cream cone’ more concerned with self-preservation than national security.”

Our executive publisher Addison Wiggin made much the same point in Empire of Debt, the book he penned with Bill Bonner in 2006. As Addison summarized it here in late 2012, “The empire has logic all its own. That logic will bring about events beyond your control. It is far better to understand those events and plan your life and your ‘portfolio’ accordingly… than to allow them to blindside you and your family.”

Back then Addison recommended “making the empire pay” — channeling some of your tax dollars back into your own pocket.

The iShares U.S. Aerospace & Defense ETF (ITA) has more than doubled in the 4½ years since. And it’s still a good buy. But if you really want to make the empire pay, Jim Rickards and his team have developed a system to identify niche names in the defense sector with massive growth potential. They call it the D.R.O.N.E. system — short for “Defense Research Optimization for Narrowing and Executing.”

In less than four months, the D.R.O.N.E. system has generated gains of 168% and 289%. And those are just the positions that have been closed out; others still open have already made up to 10 times the initial investment.

The D.R.O.N.E. system continues to identify new defense-sector names with the same potential. For access, look here. No long video to watch.

Other than crude, markets are quiet as a church mouse on this second business day of the month.

The major U.S. stock indexes are little moved, the Dow still stuck below 20,700. Gold has inched up to $1,255 — not much movement, but good enough for the Midas metal’s best showing year to date.

But a barrel of West Texas Intermediate is back above $51 — a solid $4 improvement on levels early last week. The newswires tell us that’s based on anticipation that tomorrow’s weekly inventory report from the Energy Department will show supply tightening. We shall see…

Elsewhere the market chatter is about Tesla Motors now having a market cap bigger than Ford — which is every bit as insane as it sounds. And then there’s Verizon’s decision to combine its AOL and Yahoo acquisitions into an entity called Oath. “At least it’s not as bad as tronc,” said one wag on Twitter.

Meanwhile, India’s stock market is touching all-time highs. Yet again, any controversy over the country’s cash ban five months ago is quickly receding.

The Wall Street Journal’s story about the Indian stock boom couldn’t overlook the fact that last November, Prime Minister Narendra Modi banned about 85% of all the bank notes then in use. Here’s the paper’s spin: “The move — which was aimed at punishing tax evaders and other criminals who hoard cash — slowed growth and forced millions of Indians to stand in line at banks for hours to exchange old notes. Still, voters rewarded Mr. Modi’s Bharatiya Janata Party in state elections, indicating they were willing to go through the pain if they thought it was for the good of the country.”

The good of the country! What was it Samuel Johnson said about patriotism as the last refuge of the scoundrel?

We can’t wait till the U.S. government imposes a similar scheme. As we’ve mentioned periodically since January, the Indian scheme was hatched in part by the U.S. Agency for International Development. If they can pull it off in a still-poor country of 1.3 billion, it’ll be a cinch in a still-developed country of 319 million. 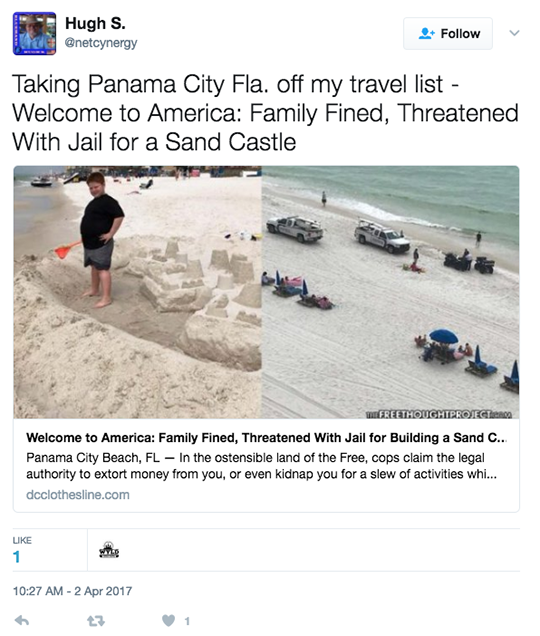 Thanks to one of our regulars for alerting us to this story, about a fellow named Bryant Rylee — who took his family to the beach last week. In the midst of building a sand castle, they were confronted by the local constabulary — who told him their construction violated the law.

But how, Mr. Rylee wondered? In his account on Facebook, he says he was told it is “illegal” to build a sand castle with a hole deeper than two feet. But the hole on this one was only one foot.

Then the officer switched gears: Rylee’s son was building the sand castle with metal tools; only plastic ones are allowed.

“It is important to note,” our reader writes, “that the officer explained to Rylee that she would let him off with a warning if he simply filled in the hole. But Rylee wasn’t buying it. He wanted to know what ordinance he was violating.

“It was Rylee’s questioning of authority that led to police escalating the call. When her authority was put into question, the officer brought in backup. Before the officer could tell Rylee which ordinance he was violating, the family was surrounded by police. In fact, four patrol units would show up and sit there for 20 minutes before any of them could produce the law that said metal beach toys were illegal.”

“Well, I personally support the Affordable Care Act and have no problems paying higher premiums so more people can have access to health care,” a reader writes after our episode yesterday.

“I know you will say that the insurance carriers are not making money so are dropping out, which will make premiums even higher and probably doom the act. My guess is that they are still making money, just not the returns that they have been gouging us on for years.

“My question to you, oh nonsupporter of the ACA, is why are you so against people having access to health care?”

At the risk of repeating some of our other comments over the past month… Health care would be plenty accessible if Washington would allow a genuine free market and stopped protecting the insurance, pharma and hospital cartels. A woman could deliver a baby in a deluxe private room for $478 — which is the inflation-adjusted price today for what California’s Santa Monica Hospital charged in 1952. What family couldn’t afford that out of pocket with a little judicious planning?

P.S. As we go to virtual press, Jeffrey Lacker, president of the Federal Reserve Bank of Richmond, has resigned. Seems he was discussing the Fed’s policy plans back in 2012 with an analyst from a firm that provides info to high-rolling hedge fund clients.