“If you shoot at the king, don’t miss,” said Jim Rickards — alluding to the Deep State’s war against Trump.

The origins of this quotation — and, for that matter, the precise words — are murky, to say the least. Was it Machiavelli? Emerson? Or was it Omar Little, the legendary stickup man on HBO’s Baltimore-based series The Wire? (“You come at the king, you best not miss,” he said.)

Heh… With that, we launch into our final episode of The 5 this week from Agora Financial’s Baltimore headquarters. Yesterday was our semiannual editorial meeting. Tonight we’ll drink a toast and once again go our separate ways.

Most markets are closed today for Good Friday, and ordinarily we wouldn’t be writing you today… but we want you to hear our editors’ latest and greatest ideas while they’re still fresh. Let’s begin…

Jim Rickards kicked things off with an update on his “America’s New Civil War” thesis laid out in the latest issue of Rickards’ Strategic Intelligence.

Jim said Trump aide Steve Bannon made a critical error during the transition: In his quest to “deconstruct the administrative state,” Bannon refused to fill scads of midlevel executive branch jobs. “But power abhors a vacuum,” said Jim — and that means many Obama holdovers stayed on the job, monkey-wrenching the Trump agenda.

That said, there’s always a chance they might overplay their hand — hence, the quote above. “When Trump confronts a situation or an adversary, he says, ‘What’s my leverage’?”

That’s the context, Jim says, for Trump’s statement this week that he’s willing to keep Janet Yellen in place at the Federal Reserve. Trump knows Yellen’s insistence on raising interest rates could tip the economy into recession (about which more below). Dangling the carrot of a reappointment is Trump’s leverage over Yellen, a gambit to get her to back off her plans.

Speaking of the dangers of a recession, we’ll pause our recap of yesterday’s editorial meeting long enough to check today’s economic figures.

While most markets are closed, the federal government is open (go figure)… and we got two big numbers…

Here’s the thing: Neither of these numbers will deter the Fed from raising rates again in June. Jim Rickards says the only things that will deter the Fed are a stock-market shock, a sub-75,000 job number or a sharp decline in inflation; even today’s inflation number probably doesn’t qualify.

If markets were trading today, we suspect these figures would knock another 100 points off the Dow, sending it to a two-month low. But with traders getting a chance to reflect over the weekend, the reaction come Monday might be a bit more muted…

[Reality check: As always, any resemblance between the official inflation numbers and your own cost of living is purely coincidental. The real-world annual inflation number as maintained by John Williams at Shadow Government Statistics is 10.1%. But even that is down sharply in a month from 10.5%.]

And now, courtesy of Jonas Elmerraji, a chart of the S&P 500 unlike any you’ve seen before… 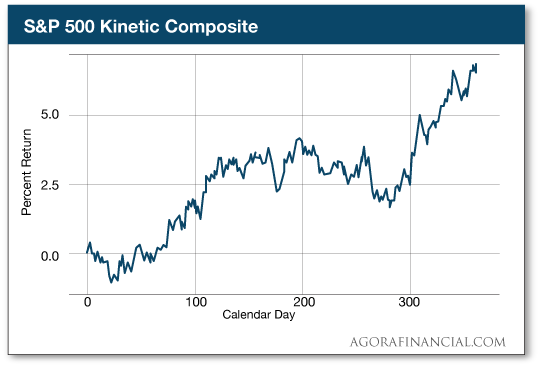 This is an early prototype of a project Jonas has been working on for months… and he’s far enough along that he took the wraps off during our meeting yesterday.

“It’s a way to visualize the seasonally strongest times year after year to own stocks,” he went on. “In other words, from a statistical standpoint, when is the wind at investors’ backs?

“Just by avoiding the sideways period on the chart, you could increase your returns on the S&P 500 by 24% every year, while sitting on cash for 41% of the year.”

Even better, Jonas has refined his proprietary system to apply it to every individual stock in the S&P 500.

The innovations — and profit potential — don’t end there. Watch this space in the weeks to come…

The market for “penny pot stocks” has matured to a point that our Ray Blanco is shifting strategy.

Up till now, Ray’s picks in both Technology Profits Confidential and the trading service Penny Pot Profits have concentrated on biotech firms working with cannabis.

Other cannabis names he’s been steering clear of. Too many of them are too speculative. But after exhaustive research, he told us yesterday he’s starting to zero in on a handful of companies he’s comfortable recommending. One of them even generates a profit — a rarity in this still-budding industry. You’ll want to stay tuned as Ray puts the finishing touches on his research.

If you’re looking for a way to accelerate your retirement plans, our small-cap specialist Louis Basenese has just hit on what might be an ideal strategy — which he revealed to us yesterday.

We won’t say too much about it right now… except that by buying very specific stocks, you can convert your shares into cash at up to 200% of your purchase price after waiting an average 17 days. You can probably wait that long, right?

And for the cherry on top, you’ll avoid capital gains tax. More to come later this spring.

Meanwhile, our income specialist Zach Scheidt is keen to amp up his investor-education efforts.

Zach is already an ace at walking his readers through seemingly complicated strategies in plain English — even buying corporate bonds or selling put options. But now he’s looking to pull all those strategies together into a comprehensive and structured plan you can use to plot a retirement road map.

We got excited as he described his plans during our meeting yesterday. Who knows, if he pulls it off, maybe our other editors can do something similar with their own favorite strategies. We’ll keep you posted.

As the week winds down, here’s the strangest gold story we’ve come across in a while… 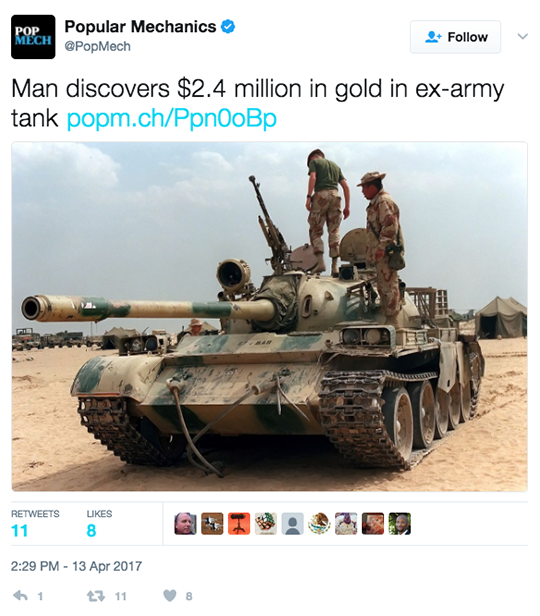 Nick Mead of Helmdon, England, is a tank collector. On eBay he recently bought a Russian-made T54/69. When he and mechanic Todd Chamberlain opened up the fuel tank, they discovered five gold bars weighing up to 12 pounds each. (They’re probably worth $1.2 million, not the $2.4 million in that headline. Still a nice haul.)

“We didn’t know what to do,” he tells the tabloid The Sun. “You can’t exactly take five gold bullion bars down to Cash Converters without questions being asked, so we called the police.”

Near as anyone can tell, the tank was used by the Iraqi army. The gold was probably looted from the Kuwaiti government during Saddam Hussein’s invasion of Kuwait in 1990. Good luck to the cops trying to untangle that chain of custody.

For his part, Mead doesn’t mind if finders-keepers doesn’t apply here. “Even if I don’t get any of the gold back, I will still have my beautiful tank.”

“Just finished reading the book Reckless Endangerment by Morgenson and Rosner,” a reader writes. “The list of enablers and promoters of the subprime mortgage scam are like a who’s who of Washington political power brokers.  Unfortunately, most are still in positions of power.

“Who on this list have been punished for their misdeeds?  In fact, they have generally been moved up to more important jobs, reaping greater riches, often in the millions, and more national financial influence.  The taxpayers have lots of hypocritical political spokespeople but few real champions.  And those champions have little or no clout.

“Why don’t you chronicle the list of powerful benefactors and enablers in the mortgage fiasco?  They all tout their financial acumen, and should have questioned both the policy objective — homeownership for all! — and the unrealistic manner of achieving it.  The head-in-the-sand approach was common to all of them.

“Larry Summers, in particular, deserves special attention.  With his insider knowledge, he shorted the housing market and made millions.”

The 5: We were chronicling most of that in real-time; after all, we’re coming up on 10 years this month. We’ve subjected all of them, at one time or another, to the opprobrium they so richly deserve.

“How The 5 turned me into a snowflake,” says the subject line on the next entry in our mailbag.

“You guys have hurt my feelings so bad I just have to vent. I’ve read your publication since DAY ONE. Yeppers, all 10 years worth. Now you say that you’ve been sending out trial issues of America Uncensored to some of your readers. WHY not ME, huh???

“I’m so disappointed, so hurt. Is it because I’m a woman? Just for your info, I’m NOT a feminist, thank you very much. However, I am an avid consumer of ‘real news.’

“Please take me in and send me an issue. If you do, maybe I’ll feel a wee bit better. Sniff.”

The 5: Again, patience please. Everyone who receives The 5 will eventually receive America Uncensored. The slow rollout, the web/marketing folk tell me, is to ensure people don’t unsubscribe the moment it starts hitting their inboxes.

That said, the rollout is accelerating. The number of people getting it this week is probably 50% higher than it was last week. Momentum!

“I’ve never written before but have enjoyed most of your banter,” writes our final correspondent.

“I have three favorite quotes and one observation to pass along. First quote is by Sam Clemens: ‘Man is the only animal that blushes. Or needs to.’ Second quote is by Will Rogers: ‘If pro is the opposite of con, what is the opposite of Congress?’ (As in the U.S. Congress.) Third quote was related to me by my nephew: ‘Politics is defined thus: where poli(y) is many and tics(k) are bloodsucking pests.’

“My observation: Have you noticed that Salt Lake City, Utah, is four four-letter words in a row? And would you believe there is not another place in this country that can or would want to make that claim?

The 5: As with the quotation with which we began today’s episode, we can’t vouch for their veracity… but we enjoy the smile.

P.S. We don’t know exactly when it’ll happen… but the president does plan to unleash a force that could trigger the biggest one-time wealth transfer in history.

And the time to position your portfolio is now. For reasons you’ll see when you click here, this presentation comes offline at midnight tomorrow night.