The Fed is Crashing This Sector Right Now

Even when Warren Buffett has nothing to say, some people latch on to his every word.

That’s how it goes every year at Berkshire Hathaway’s annual meeting in Omaha. Thousands of people pay for airfare and hotels so they can reverently ask questions like, “What five things do you look for in a company?” when you could find the answer in any one of five dozen books about Buffett.

And so it went last weekend. Asked about the retail sector, he dropped these pearls of wisdom, according to a story at Business Insider:

OOH, I’M BLINDED BY THE WHITE-HOT RADIANCE OF YOUR INSIGHT, GREAT ORACLE!

“Retailing is very tough, and I think the online thing is hard to figure out.” Berkshire dumped $900 million of Wal-Mart in February.

It comes back to the overbuilding of retail space that we’ve been harping on in recent days. There’s roughly 50 square feet of retail space per capita in the United States. In Europe, there’s about 10.

Sure, some of it is the fact that everything in Europe is more compact. Or as the humorist P. J. O’Rourke complained 30-odd years ago, “Everything’s too small. The cars are too small. The beds are too small. The elevators are the size of broom closets… You can’t swing a cat without sending it through customs.” (This was before the European Union as we know it came into being.)

But really… are Americans five times more prosperous than Europeans because we have five times the retail space? Something’s gotta give.

Here’s an updated version of a chart we shared eight days ago. So far this year, retail chains have announced the closing of more than 3,200 locations… 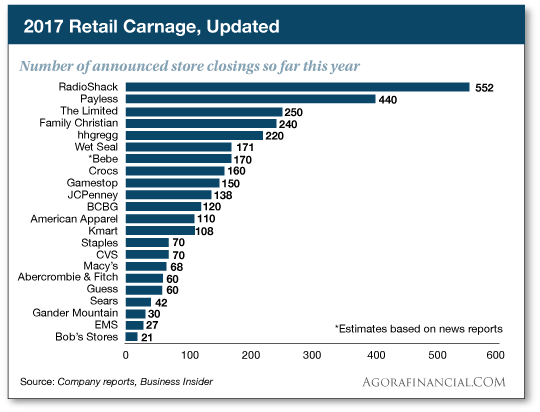 But that’s just the beginning, says our David Stockman: “There is an implosion coming in the malls and brick-and-mortar retail space that will be every bit as devastating as the housing crash of 2007–08.

“The culprit responsible for the retail Armageddon now underway is the same Fed that fueled the housing bubble through systematic falsification of financial asset prices. Like in the case of securitized home mortgages. The availability of cheap commercial property debt owing to the relentless quest for yield among bond managers led to artificial mall economics.

“Not only did malls get way overbuilt, but more importantly, they got over-financed and overvalued.”

All that cheap money sloshing around the retail sector blinded retailers and property developers to changing consumer tastes. “Under a free-market regime of honest price discovery,” David explains, “stock investors would have been discounting current period profit levels to reflect the diminished prospects of the mall sector down the road and the rapid migration of the American consumer to online shopping in category after category of merchandise.”

Instead, mall traffic has been declining steadily for nearly three straight years… and the industry’s been blindsided.

One respected retail analyst expects out of 1,100 indoor malls… 400 will fail in the years ahead.

“Another survey study by CoStar Group last year,” David says, “found that a vacancy rate of 10% or higher prevailed in nearly one-fifth of enclosed malls. Upward of 50 malls now had vacancy rates of 40% or greater — a sure sign of impending demise.”

David has reason to believe the biggest blindside blow of all is set to hit retail in just two more days. But because you’re in the know, he says you can position yourself for spectacular gains while everyone else is licking their wounds. If you want to seize the moment, start by watching David’s exclusive video at this link.

In the meantime, the S&P 500 and the Nasdaq touched new intraday highs this morning. As we write, the S&P is hovering just above 2,400.

Depending on how you measure it, volatility in the stock market is the lowest right now since either 2006… or 1993.

The greenback is picking up strength, the dollar index up nearly half a percent at 99.6 — its highest level in 2½ weeks. That’s pushed gold down to $1,217 — its lowest level in nearly two months.

Small-business owners are of two minds these days, judging by the latest Optimism Index from the National Federation of Independent Business.

The headline number for April rings in at 104.5 — a modest drop from March. That’s six straight months of “historically record-high readings,” says the NFIB — a feat seen only once before in the survey’s long history, in 1983: 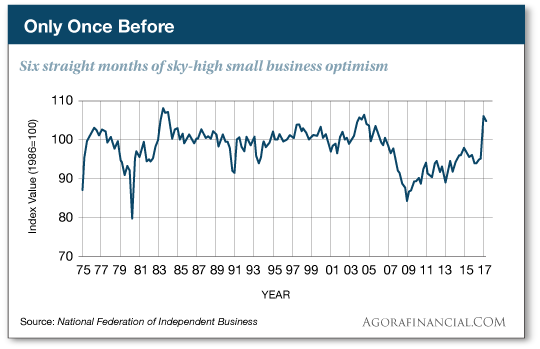 Hmmm… In 1983, the economy was starting to climb out from the brutal “double-dip” recessions of 1980–82. There was nowhere to go but up. Now? We’re eight years into an economic expansion — albeit a very weak one. Any optimism appears pinned on the hope that Donald Trump will drain that proverbial swamp.

Which brings us to the one factor that dragged down the index this month — expectations for future business conditions. Much of the survey was conducted shortly after the first failed attempt at an Obamacare replacement bill.

“Small-business owners want Congress and the White House to address the high cost of health care, which has been their top concern for more than 30 years,” says NFIB chief economist Bill Dunkelberg. “When that effort failed in March, expectations for better business conditions collapsed.”

With the Senate set to write a whole new health bill — junking the one the House passed last week — next month’s survey ought to be, ummm, interesting…

“We take them for granted, but it really wasn’t all that long ago that a trivial injury could become infected and kill you.

“For example, back in 1924, President Calvin Coolidge’s 16-year-old son got a blister on his foot playing tennis. The blister became infected. Calvin Jr. died of sepsis within a week.”

And we’re in grave danger of those bad old days coming back: “Unlike other drugs, antibiotics stop working over time. Bacteria evolve resistance, and eventually, even our best drugs can no longer kill them.

“Bacteria have a number of ways to evade antibiotics. They can create biofilms, putting a physical barrier up against a drug. They can evolve enzymes that break down an antibiotic as fast as it crosses a bacterial cell wall. Bacteria also have molecular ‘pumps’ in their interiors, and they can evolve ways to move antibiotic compounds out.

“Once a bacterial strain develops resistance to all of our existing drugs, it can no longer be stopped. It kills.

“This means that a steady stream of new antibiotics is required. And a new antibiotic that can kill multidrug-resistant strains will command top dollar on the market.”

[Ed. note: Ray is on the case of a company developing one of these desperately needed antibiotics. So far, his recommendation is up 72%… and remarkably, he says it’s still a buy.

It’s companies like these that are responsible for the fortunes of people Ray calls the “coffee shop millionaires.” Who are they… and how can you become one? Answers here.]

Memo to CNBC: The leader of North Korea doesn’t have a Facebook page.

Our colleagues at America Uncensored inform us that yesterday, the network that’s “first in business” posted a story on its website about the latest chest-puffing by North Korean dictator Kim Jong Un. 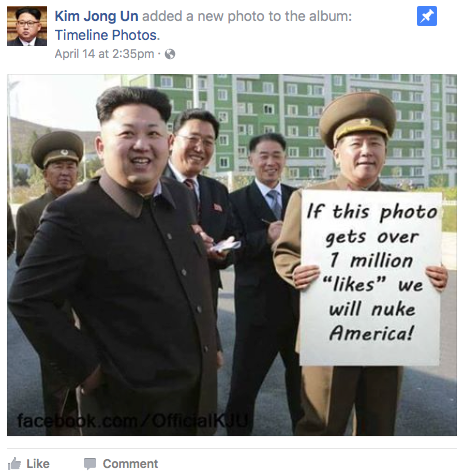 Here at The 5, we’ve been questioning the North Korean regime’s level of tech savvy since 2013. Yeah, we ran this photo again only a few weeks ago. But it never gets old… 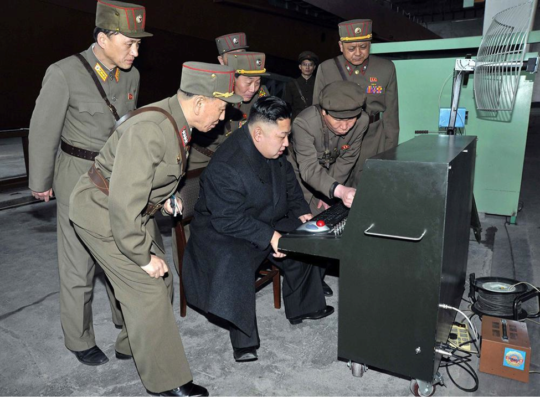 “Dammit! Why is The Pirate Bay down?”

To the mailbag: “There is an old Wall Street saying I once heard: ‘The market may be wrong, and you may be right, but the market can be wrong a lot longer than you can remain solvent.’ That is, bet against the trend at your own peril.

“Both Rickards and Stockman believe in, and advocate for, the imminent near-term crash hypothesis. They may be wrong.

“Here’s an alternative view: The MELT-UP will continue for some time yet, maybe one–two or more years. Why? 1) There is (reportedly) a tremendous amount of cash on the sidelines, which is ever more being drawn, ‘moth to flame’-like, to the market. 2) The idiot central bankers are loading up their balance sheets by buying stocks with their fiat currencies. Stockman’s schoolmarm (Yellen) has made such noises in that direction, but some of the other central banks are already in.

“This could lift stocks to even more ridiculous heights than the current one and for a lot longer (Dow 25K? 30K?). This means that the leveraged option ‘short’ strategies — puts/calls/LEAPS — are doomed by expiration dates.”

The 5: The saying was that attributed to John Maynard Keynes: “The market can stay irrational longer than you can stay solvent.”

Jim and David have the courage of their convictions. They are, by and large, out of the stock market — or as David says, “the casino.” And the stock and ETF recommendations in Rickards’ Strategic Intelligence are extremely sector-specific. (Jim also says the likelihood of a crash before the next Fed meeting in five weeks’ time is nil.)

If you want to take the other side of that trade, we have editors and services that fit the bill. In his income-oriented services, Zach Scheidt has several plays that count on a resilient U.S. consumer. And Louis Basenese is optimistic about the Trump agenda’s impact on the market.

But even their optimism isn’t blind. Zach has talked here in The 5 about how valuations are stretched right now. And Louis’ team has begun laying down some short-side bets in Extreme Alpha.

Optimist or pessimist, it’s nail-biting time. We’ll be here all the way…

P.S. Of all the bullish forecasts our team has issued this year, there’s one that, uh, trumps all others. If you haven’t seen it yet, it’s worth a look.