“Whazzup with Au?” writes one of our regulars — invoking the symbol for gold on the periodic table.

At the time he wrote in on Tuesday morning, gold was touching year-to-date highs around $1,293 — a $75 improvement in a month.

“So the rate increase next week is baked in, right? So what’s going on with the price in gold (and, in a similar vein, Bitcoin)?

“Is it the possible wars with Iran or North Korea? That economic data are weak enough where the market is looking past the June increase and saying the next one won’t happen?

“It can’t be that the can they have kicked down the road has come to its final resting place, can it?”

The selling began during electronic trade yesterday afternoon, the moments after trading on the Comex wrapped up for the day. Then the Midas metal took an even bigger spill around 9:30 EDT this morning.

Conspiracy theorists immediately smelled a rat, suggesting it was no coincidence today’s dump came minutes before former FBI chief James Comey began his testimony on Capitol Hill — an event the Establishment deems so huge that the dinosaur broadcast networks are pre-empting The View and The Price Is Right to carry it.

Maybe, maybe not. We prefer not to speculate on what’s behind minute-to-minute price movements. Better to watch the big picture. Which we shall do today…

“Nothing is for certain, but the march toward $1,300/ounce is still on track,” says Jim Rickards. “We could see that level by mid-June, if not sooner.” 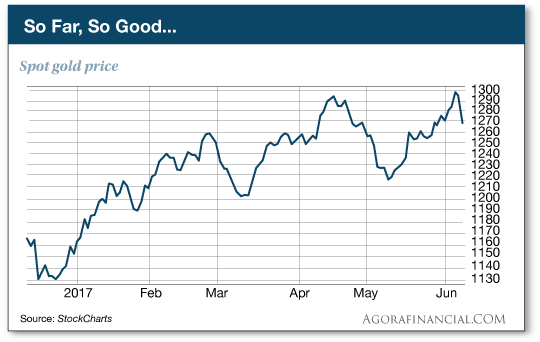 Whenever gold reclaims the $1,300 level, it will have completed a round trip that began Election Day.

“This dip and recovery reflects several factors,” Jim tells us. “The dip from Nov. 8 to Dec. 15 was based on Trump euphoria. With tax cuts, health care reform, infrastructure spending and reduced regulation on the way, analysts expected solid real growth. Investors sold gold and bought stocks, and the rest is history.

“Then reality intruded. None of Trump’s programs has been enacted, and the prospects for all of them are cloudy at best. Health care is stuck in the Senate, tax reform is stuck in the House and there’s no money for infrastructure. There are only 29 working days for Congress between now and the August recess. (‘August recess’ is a misnomer, because Congress actually takes close to two months off, not one.)”

Which brings us back to the Comey testimony today. It does matter for the gold price, at least in a wider context, says Jim.

“Much of the current session of Congress will be consumed with hearings on Russia, confirmation of a new FBI director and wrangling over the debt ceiling extension and budget priorities. That does not leave a lot of time for the substantive stuff Trump wants to accomplish.”

And our reader is onto something with his geopolitical concerns: “Throw in war drums from North Korea, bellicosity toward Iran, terrorism in Europe and rising tension in the South China Sea. It’s no surprise gold has a bid driven by economic uncertainty and a desire for geopolitical safe havens.”

And let’s not forget the Fed. Next Wednesday it will bump up the fed funds rate another quarter percentage point.

“They are continuing on their kamikaze mission of raising interest rates into weakness,” Jim goes on. “June 14 will be D-Day. On that day, the Fed will both raise rates and outline a plan to reduce the base money supply under the banner of ‘balance sheet normalization,’ also known as quantitative tightening, or QT.

And the economic numbers have been anything but strong.

There’s been a dearth of data this week. But there was a barrage of bad news last week, Jim reminds us. “Job growth slowed, labor force participation dropped, inflation dropped, auto sales declined and real wages continued to flat-line. Gold sees what’s coming next, which is either a recession or something close to it by the late summer.

“At that point, the Fed will have to reverse course. They’ll do this through ‘forward guidance’ that signals there will be no rate hike in September.”

[Ed. note: Jim is so confident about gold’s prospects this summer that he’s reviving his “Double Gold” offer. For access to his team’s penny stock picks — and a double version of his free-gold offer — look here.

Please note that we expect intense demand for this free gold, so we’re closing the offer in eight more days, on June 16. Act here: No long video to watch.]

As the day grinds on, the infamous “triple threat” to the markets touted by the mainstream on Monday is fizzling.

Aside from Comey’s testimony, there’s also a meeting by the European Central Bank — which on the one hand indicated it’s done with interest rate cuts… but on the other hand it said it would extend its quantitative easing/money printing if need be.

That said, the parliamentary elections in Britain are ongoing as we write, so there might yet be some thrills ’n’ chills later tonight and tomorrow.

But in the meantime, the major U.S. stock indexes are slightly in the green. Gold has recovered a couple of bucks to $1,276. Treasury rates are inching back up.

“The crash is beginning,” says our Rick Pearson — who’s been laser-focused all year on the gathering disaster of subprime auto loans.

“It’s not just that the problems are bad,” he says. “We already knew that. More importantly, ‘everyone else’ is starting to figure it out as well.”

The impact is already making itself felt far beyond the auto and lending sectors. “Over the weekend,” says Rick, “Barron’s cited a report that noted year-over-year auto sales had declined by 3.7% in the U.S., 6.8% in Europe and 1.8% in China, even as inventory and production remained too high. The result was that shares of U.S. Steel were down 50% from their peak in February.”

The parallels to the housing debacle a decade ago are remarkable. Wait till you hear what one lender on Rick’s radar did: “A recent analysis by the debt rating service Moody’s uncovered that this lender had verified the income of a mere 8% of borrowers before packing up those subprime loans and selling them off to other investors via securitization.”

Behold, the best billboard ever for a McDonald’s breakfast burrito… 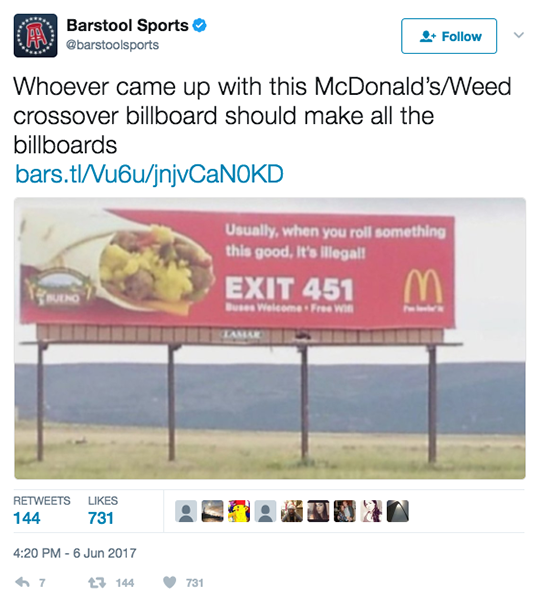 This billboard can be found outside Raton, New Mexico — about 12 miles from the state line with Colorado, the pioneer in legalized recreational pot.

And yes, this particular McDonald’s is owned by a franchisee, not the company itself. Once a photo of the billboard went viral a few days ago, word quickly got back to MCD headquarters in Oak Brook, Illinois.

The suits were not amused. The billboard “does not meet our standards and is being taken down,” said a statement.

Although the statement didn’t say how soon. Heh…

On the subject of the waning number of startups, a reader writes: “If these numbers are coming from Department of Commerce or any other federal or state government agency, they are likely bogus.

“More and more people that I know (even family) are starting up businesses without the ‘benefit’ of a governmental blessing — going the underground economy route to avoid paperwork and taxes (and more paperwork) and costs of all sorts. They are going the cash route when possible, and if having to use/take plastic or checks, doing it through personal accounts or PayPal or the like (don’t know anyone personally using Bitcoin, or at least admitting to it). Or just doing barter.

“Of course, I’m a long ways away from these so-called hubs where the maps show all this business development is going on — here in the western states, it is a bit easier to fly under the radar, especially in the smaller towns and cities where not everyone has to see your W-9 or even an I-9 to give you work.”

The 5: The Economic Innovation Group did rely on Census data for much of its research. We understand your point. On the other hand, what else is there to go on?

Nor do we doubt there are substantial numbers of people conducting commerce and employing other people under the table. That’s a natural consequence of the paperwork and taxes and more paperwork.

The question is can that scale up? A typical new business creates six new positions in its first year. But we doubt that rule of thumb applies to a startup in the underground economy.

So we think the study’s conclusion about 3.4 million “missing” jobs is still valid…

On James Altucher’s contempt for homeownership, a reader begs to differ: “Even in California, where housing costs are more than triple the national average, owning beats renting if you plan to stay longer than five or 10 years.

The 5: In the first place, James scorns the notion of your home as an investment. And on that score, we agree completely. We’d have hoped that daft notion would have died in the Panic of 2008, but we see the real estate industry is once again trying to push it, as if 2008 were a one-off. Do not consider the value of your home as part of your “investment mix.”

In the second place, there’s your phrase “if you plan to stay longer than five or 10 years.”

Already the Census Bureau says the median length of homeownership is not even six years. And it’s James’ opinion that in the economy of the future, few of us will live in one place that long.

“Why do people move?” he says. “Because jobs are no longer as stable as they once were.

And they are no longer in one or two cities but all over the country or world.

“So the original reasons for owning a house (a guaranteed easy commute into an urban area where the jobs are) are no longer valid, as demonstrated by the increasingly short life span of house ownership.

“This is a trend that is continuing forever.”

P.S. Did you play it? Jim Rickards’ prescient call last week on a falling oil price has turned into a 35% gain in only 10 days for readers of Rickards’ Intelligence Triggers.

If you want access to fast-moving trades like these, you’ll want to give this a look right now.