“The rally in the precious metals sector has probably only just begun,” declares the 2017 edition of In Gold We Trust — an annual report from Ronald Stoeferle at Incrementum AG, an asset manager in the tiny European nation of Liechtenstein.

Mr. Stoeferle has published this report for the last 11 years. It has become a touchstone for people interested in precious metals — packed with revealing charts.

Today we share two of them — updated versions of two we shared with you last year.

The first compares gold’s run since the year 2000 with its epic rally during the 1970s. Note that the time frames don’t match up precisely: What took 10 years to play out back then might take nearly a quarter-century to play out now. 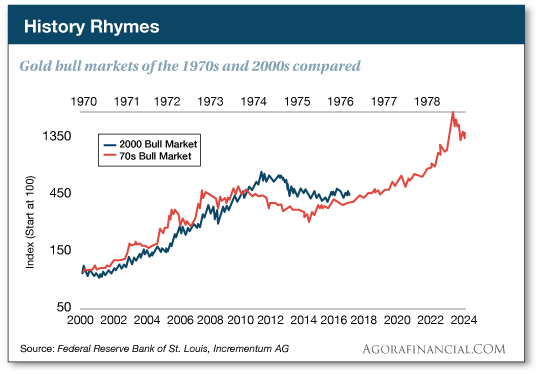 With another year’s hindsight, it’s evident the worst is over for gold — just as Jim Rickards forecast in this space back in December 2015.

But Jim had had a recent conversation with “adventure capitalist” and fellow author Jim Rogers. Said Rogers: “No commodity goes from a baseline to a permanently new high without a 50% retracement along the way.”

Again, we pointed all this out in December 2015 — what turned out to be the bottom of that nasty retracement.

Typically what’s good for gold is great for gold stocks… and the coming years are no exception.

Stoeferle’s report tracks the performance of six bull markets in the gold-mining sector going back to 1942 — using the Barron’s Gold Mining Index as a yardstick. 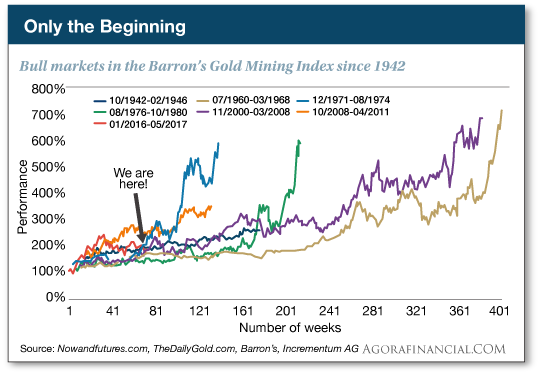 “The current uptrend,” Stoeferle writes, “is still relatively modest in terms of duration and performance compared to its predecessors.

“Should we really be on the cusp of a pronounced uptrend in the sector — which we assume to be the case — quite a bit of upside potential would remain.”

As well it should, says Byron King — our resident geologist who does the company-level research for Rickards’ Gold Speculator.

Too, there’s a high likelihood that big institutional money — hedge funds, pensions and the like — are on the cusp of plowing money into the gold miners. “The reasons are well-known,” according to Incrementum, says Byron. “They include excessive global debt, the decline of the dollar as a global reserve currency and the point that the U.S. is close to entering a recession.”

Meanwhile, a powerful short-term catalyst is about to shake up the world of penny gold stocks.

As Jim Rickards explains it, an all-new class of penny gold shares is about to come into existence — thanks to an anomaly that’s never been seen before.

Jim will lead a live online briefing with all the details — and the immense profit potential that will result — tomorrow at 7:00 p.m. EDT. Access is free, but we do ask that you RSVP so we can set aside enough bandwidth to accommodate everyone. Here’s the signup link.

To the markets… where tech shares are recovering from a two-day thumping.

As a result, the Nasdaq is up strongest among the major U.S. stock indexes — more than half a percent at 6,211. But the Dow is no slouch either, powering into record territory north of 21,300.

The big economic number of the day is producer prices, which the Bureau of Labor Statistics says were pancake-flat in May. But if you throw out food and energy — the so-called “core” rate — the number jumped 0.3%.

Small-business owners are still taking a deep drag from the hopium of the Trump economic agenda.

The latest Optimism Index from the National Federation of Independent Business rings in at 104.5 — the same as the month before. The number has been sky-high for six months; for now, the fact that tax cuts and Obamacare reform are stalled in Congress isn’t putting a dent in the number.

Asked the single-most important problem they face, 22% cited taxes; that’s been the leading category for years now. But not far behind at 19% is finding qualified workers. “The problem appears to be getting worse,” says NFIB chief economist Bill Dunkelberg.

“It’s forcing small-business owners to increase compensation, which we’re seeing in this data, to attract new workers and keep the ones they have. But it also means a lot of small-business owners are short-handed. They can’t keep up with customer demand because the labor pool isn’t producing enough qualified workers.”

With less than seven months before recreational cannabis becomes legal in California, researchers project it will become a $5 billion market.

A report from the University of California Agricultural Issues Center says legalization will boost the state’s tourist trade — even though its fellow West Coast states Oregon and Washington have already legalized too.

That’s because of something we mentioned a few days ago: California will impose not only a 15% sales tax on cannabis, but also a flat $9.25 per ounce tax on flowers and $2.75 per ounce on leaves — regardless of the market price.

A flat tax on pot isn’t working out so well in Alaska; as we noted last month, there’s still a thriving black market because the state imposes a flat $50-an-ounce tax.

Oh, well: A new $5 billion business is sure to light a fire under select penny pot stocks. And you don’t have to wait until 2018 to grab your share of the gains.

Progress is slow… but the Texas gold depository is a step closer to reality.

Two years ago, the legislature passed and the governor signed a bill establishing the Texas Bullion Depository. The idea was to have homegrown storage for the $650 million in gold owned by the University of Texas Investment Management Co.; at present it’s held in vaults at HSBC Bank in New York. Equally important, private individuals will be able to store their own gold at the depository as well.

Not a drop of concrete has been poured for the Texas Bullion Depository yet. But yesterday the state comptroller named a longtime employee, Tom Smelker, to oversee it.

Hopes are high that more details will be forthcoming soon. “Plans initially called for naming a location for the depository, and the company to run it, last year,” according to the Fort Worth Star-Telegram. “Officials said those decisions have taken longer than they thought.”

“Here is a question I want answered,” begins today’s mailbag on the subject of defense stocks.

“If an economic/financial ****storm hits us, won’t the big four or five Beltway bandits get hammered too? Are Northrop Grumman and Raytheon and Lockheed and General Dynamics recession-proof?

“The need to rebuild military hardware is clear and Trump is spending over $1 trillion. But what if we crash and government has no money? Will they push forward for jobs and fiscal stimulus? Or recoil and collapse?”

The 5: It’s true that the biggest defense stocks took a hit along with the rest of the stock market during the Panic of 2008. But from the bottom in March 2009, the recovery in those names has been stronger than that of the broad market. That’s been especially so the last four years, even as the Beltway class was caterwauling about the impact of the “sequester” on military spending.

We’ll be keeping a keen eye on whether defense names will be vulnerable in the next downturn. But here’s something to keep in mind: The fastest way politicians can divert public attention from an economic crisis… is to start a war.

One more reader email on the topic of gold manipulation before we lay it to rest (until it flares up again in a few months, heh)…

“If everyone demanded physical delivery, it would expose the manipulation, indeed. ‘And then what?’ as you rightly ask.

“For gold to be useful as ‘real’ money (there’s no such thing), it must be easily divisible and transportable, which physical gold is not.

“Ergo, a system must be devised to issue paper or electronic media backed by the vault content to facilitate modern transactions.

“Voila! We are right back to where we started from. A system based on trust of the overseers.

“That is why I don’t buy the $10,000 gold prediction, for even if it should come to pass, prices for everything else will be commensurate, as Jim Rickards himself admitted. So where is the advantage of holding that gold? Can you disabuse me of my naïveté?”

The 5: Jim has his head down preparing for tomorrow night’s special event, but we’re pretty sure he’d say the metal is wealth protection for whenever the next crisis hits and the financial system is put on lockdown — or to use his preferred term, “ice nine.”

It will have value in a way even physical cash might not — witness the messy bank note ban in India last November.

“Been reading this for a bit over a year,” writes our final correspondent.

“I’m always thunderstruck at how much you people give in nearly every issue. I always learn plenty to chew on and it really is affecting my life in positive ways, and you should know that most of us silent internet creatures are very grateful. I’m a very big fan of Jim Rickards, who I think is up there with Ron Paul now.

“It’s good to hear the thoughts of the remnant of awake Americans, keeping the fire stoked, much thanks and credit to you at The 5, and this miracle called the internet.

“I wonder what you fine folks, all of whom are clearly much further along than I am, think about the prospects of Denbury Resources, Transocean, Tidewater or GulfMark in the next decade. I see some massive potential gains, but then I could be wrong.”

The 5: None of those names is a current recommendation of our team. We see the latter two recently landed in bankruptcy court; perhaps they’ll end up in the hands of wiser managers.

It’s still a dicey time in the oil and gas sector, even as innovative players are able to turn a profit at lower prices. Zach Scheidt has recommended a handful of companies that throw off a nice income stream, but even those are tactical plays — not companies he figures on holding for, well, the next 10 years.

The energy sector’s time will come around again. When it does, we’ll be ready to pull the trigger.

P.S. All eyes are on the Federal Reserve tomorrow. The Fed’s Open Market Committee is almost certain to raise its benchmark fed funds rate again.

Jim Rickards wants you to be ready. That’s why he urged us to organize a live online event to clue you in. It happens tomorrow at 7:00 p.m. EDT. It won’t cost you a thing to watch. Sign up here and we’ll make sure to reserve you a spot.