How retro: In this era of electronic trading, an outfit called Box Options Exchange wants to open an old-fashioned trading floor in Chicago.

Those were the days, recalls our newest contributor, Alan Knuckman: “The near-deafening thud of the hundreds of time stamp machines rolling over in unison every minute… the high-pitched ring of order phones buzzing incessantly like locusts… colored-jacketed clerks and brokers jostled and jeered in very limited physical space.”

As we mentioned yesterday, Alan belongs to the last generation of traders who remember when “open outcry” was the main way business got done in the stock and bond and futures markets. He was elbowing for position with the best of ’em at the Chicago Board of Trade.

Heck, only a decade ago, President Bush could still have a photo op like this at the Chicago Mercantile Exchange… 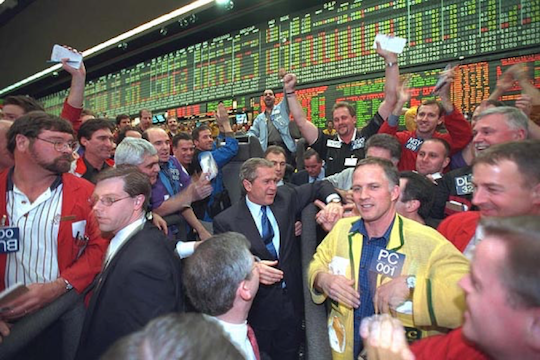 … but in 2015, the exchange’s parent CME Group closed most of its futures trading pits.

But Box’s plans are running into resistance from the established players: The Chicago Board Options Exchange, the New York Stock Exchange and the Nasdaq are all urging the SEC to turn down Box’s proposal; a decision is due by early next month.

Whatever the outcome in this one isolated instance, the die is cast: “The days of the floor trader are coming to an abrupt end,” says Alan.

“For hundreds of years the order route was the same,” he explains. “You called your broker with a buy or sell, the broker called a desk on the floor, a phone clerk wrote the request on a ticket, a runner ‘ran’ the trade to the trading pit where a broker would execute the trade, an endorsed filled order card was grabbed by another runner and brought back to the desk, a phone call was made to your broker and they in turn called you with your confirmation.

“This was a very labor-intensive — but extremely efficient — execution method for trillions of dollars in transactions.”

And technology has taken a wrecking ball to all of it. “Electronic markets have done away with the order filler and the corresponding locals in the pit to make things work. A man doesn’t stand on that step in the pit to trade anymore. Instead he presses buttons on a laptop — electrons fly and buy.”

So what’s it to you? Everything. “The disappearance of the floor means nobody has an advantage anymore,” Alan goes on.

“Big traders and small, short and tall, all have equal access to opportunity… And in today’s digital marketplace, that means one thing — the potential to profit has never been greater… This is hands-down the best time in the history of markets for the ‘little guy.’

As we pointed out yesterday, the big guys don’t even have the advantage of superior information anymore. That’s how much the market has been, for lack of a better word, “democratized.”

“First, you need to know what to trade. A floor trader was limited to one market. The boys’ club had hard rules. A corn guy could only take advantage of whatever opportunities or not that they had in that particular pit. Gold was its own game, and so on.

“Now? Anybody and everybody can trade in any market anywhere anytime. Money never sleeps… It moves around the globe at lightning-fast speed to meet the need of greed.

“Second, besides knowing what to trade, more importantly you need to know what vehicle to trade it with…

“With today’s digital world and near-endless trading strategies, the importance of picking the right type of trade — stocks, bonds, options, currencies and more — can make a HUGE difference in profit. Do you want to make $31.25 or $31,250? Do you want to call an Uber on your way home or chauffeur your Tesla?”

But from that multitude of options, how can you possibly choose?

That brings us to the patent-pending tool to which Alan has access — a trading system that telegraphs big price moves before they happen.

“I was skeptical at first,” he tells us. “After all, I spent 25 years working in the heart of one of the biggest exchanges in the world. And I had never heard of anything like it.”

But after Alan put it to the test, he came away a believer. “I’ve done tons and tons of back-testing to see just how effective this special indicator is. And the results were nothing short of shocking. That testing showed me this indicator has the potential to produce an average weekly gain of 350%!”

During a special online briefing tomorrow at 1:00 p.m. EDT, Alan will show you how to tap the power of this revolutionary trading system. It won’t cost you a thing to watch; just RSVP at this link and we’ll be sure to save you a spot.

It’s another sleepy summer day in the markets. The Dow and the S&P are down fractionally, the Nasdaq up fractionally.

Even the retailers are catching their breath after another whacking yesterday. The XRT retail ETF is holding its own after Gap got thumped 6% and Macy’s tumbled 7%. Abercrombie & Fitch tanked 21% when a sale fell through. (David Stockman says more pain is on the way for retail — in just over two weeks, by his reckoning.)

“Higher nominal rates and lower inflation mean the spread between the two, equal to real rates, is going up. That’s a double-whammy for gold.”

But Jim says it can’t last. The economy is slowing perceptibly — thanks in large part to the Fed’s three rate increases since December. The Fed continues to make “hawkish” noises, but, “The next move, probably by late summer, is toward Fed ease through forward guidance, lower nominal rates, higher inflation, lower real rates and much higher gold prices.

“Savvy investors know that today’s gold prices won’t last and this may be the last great entry point before gold makes a new and decisive move to the upside.”

Gridlock in Washington is putting a damper on the enthusiasm of small-business owners, judging by the latest Optimism Index from the National Federation of Independent Business.

The June number rings in at 103.6. It’s been creeping down from a 12-year high of 105.9 set in January. Without progress on Obamacare repeal and tax reform, there’s nowhere for the number to go but down.

Meanwhile, the tightness in the labor market might be easing a bit; 15% of survey respondents said finding qualified help is their single-most important problem. That’s down from 19% the month before.

The jokes almost write themselves: Legal cannabis supplies are running so low in Nevada, the state deems it an “emergency.”

Recreational marijuana became legal in the state on July 1. Demand has been so intense that by July 7, last Friday, the Department of Taxation issued a “statement of emergency,” which was promptly endorsed by Gov. Brian Sandoval.

[Back in the 1970s, President Carter cranked down the White House thermostat and wore a cardigan sweater by way of encouraging energy conservation. Maybe Gov. Sandoval should encourage Nevadans to conserve weed by switching from joints to bowls…]

The practical result of the “emergency” declaration? This coming Thursday the Nevada Tax Commission will decide whether to lift its cap on the number of distribution licenses it issues. Right now those licenses can be issued only to existing alcohol distributors. Never underestimate the power of the booze lobby, huh?

State officials are in a mild state of panic; legalization has been in effect only 11 days but the school budget for the coming year is already counting on incoming cannabis tax revenue. If there’s not enough legal supply to tax, that could be a problem. The Tax Commission meeting Thursday ought to be a hoot: “We need more weed for the sake of the children!”

[Ed. note: Moments ago, Penny Pot Profits editor Ray Blanco urged readers to sell a position they laid on only last Thursday for a 50% gain. Don’t fret if you missed out; there’s plenty more where that came from.]

“Dave, you need to adjust your sights and quantify what you mean when you speak about the demise of the defined benefit plan,” a reader writes.

“Indeed, many large Rust Belt companies, state and local governmental non-ERISA plans and unions have used the ‘hide the pea’ routine to pass along ‘cashless’ compensation manifested by hyped-up interest assumptions. Now with benefit promises outstripping trust assets to pay them, everyone is looking around with long faces wondering how this sorry circumstance could have visited upon us.

“In fact, the largest growth segment of the retirement plan business by percentages is not the 401(k) plan. It is the cash balance plan. Since 2006, cash balance plans have grown from 3,893 to over 15,000 today. These plans are hybrid defined benefit plans that look like a defined contribution arrangement but have contribution limits that act like a defined benefit plan. IRS regulations promulgated in 2010 have pushed along growth.

“But the real attraction is successful smaller businesses and professionals that need to stuff another $2–3 million into their individual retirement plan account. Paired with a 401(k) plan, this arrangement is hard to beat for articulated key person benefits. It’s a big world out there!”

The 5: True enough, cash balance plans are a boon for older business owners running behind on their retirement savings. The annual contribution limits put a 401(k) to shame.

But a payroll employee approaching retirement age who suddenly gets switched from a defined benefit plan to a cash balance plan might not be so happy. A DB plan’s benefits are usually based on the final few years’ salary before retirement; a cash balance plan takes all working years into account.

So it all depends…

As an Agora Financial reader, you have exclusive access to this online event. It’s tomorrow at 1:00 p.m. EDT. Alan will reveal a revolutionary strategy allowing you to turn the tables on Wall Street’s elite… while supercharging your retirement savings.

This event is absolutely FREE, with no obligation. All we ask is that you sign up in advance, so we know how many people to expect. The free sign-up link is right here.