The Creepy Calm in the Markets (It Won’t Last)

“This summer, investors have been treated to an incredibly low level of volatility,” affirms our income specialist Zach Scheidt.

Logical conclusion: “We should expect volatility to return with a vengeance — and prepare for it,” says our small-cap guru Louis Basenese.

Indeed, a creepy calm stalks the markets these days.

“A calm market causes investors to take much more risk in their portfolios,” Zach Scheidt explains. “After all, it appears that stocks are moving slowly and that it will be easy to get out of speculative positions if things turn around.”

The most common measure of market volatility — or the lack thereof — is the CBOE Volatility Index, the VIX. It’s a real-time gauge of implied volatility based on the trade in S&P 500 index options.

Aside from a couple of teensy spikes in April and May, the VIX has hovered near historic lows throughout 2017… 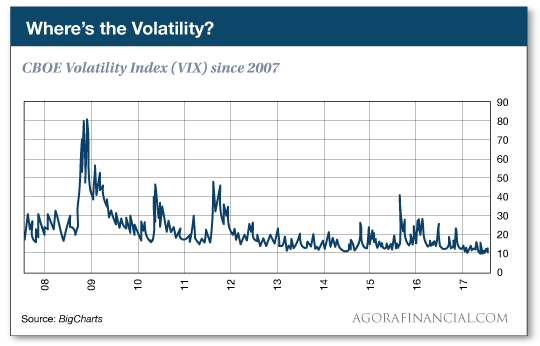 “The low level of volatility has lulled many investors into a false sense of security,” Zach goes on. There are risks like inflated stock valuations and the ever-present geopolitical turmoil.

“In short,” he says, “it’s not a good time to be buying large speculative positions in Wall Street’s favorite growth stocks.”

“Ten-year Treasury note yields have been stuck in a narrow trading range with a yield to maturity between 2.6% and 2.18% since last December.

“Oil has traded between $40 and $55 per barrel since last December, with no breakouts either to the $30 or $60 levels that many expected.

“Sure, these markets go up and down every day. Nimble or unlucky traders can make or lose money on those swings, but there are no persistent trends and no extreme moves. You could set your portfolio, go to sleep like Rip Van Winkle and wake up to find almost no change.”

With one notable exception: foreign exchange.

“It seems all of the volatility of important stock, bond and commodity markets has migrated to the biggest market of all — forex,” Jim says.

“That’s a scary thought. Forex customarily trades in so-called ‘pips,’ which are measured at the fourth decimal place in an exchange rate. Lately we’ve seen moves of 1,000 pips per day.”

The currency markets hang on every word of central bankers nowadays. Worse, says Jim, “the system has no anchor.

“There is no standard, stable benchmark for deciding what any currency should be worth. There’s just a bunch of central bankers with obsolete models fighting currency wars while denying that’s what they’re doing. Currencies resemble boats with no moorings; they just drift around and occasionally crash into each other. The problem is that without moorings, they could all hit the rocks…

“So enjoy the summer lull in stocks, bonds and commodities. It won’t last. Forex markets tell us that the system is highly volatile — it’s just that Wall Street analysts are looking for volatility in all the wrong places.”

Actually, it’s worse than that: Many retail investors are laying on what Louis Basenese calls “the dumbest trade ever.”

“It appears that the investing herd is betting that the placidity continues.

“A single day in late June witnessed $3.3 billion worth of bets that U.S. stocks will essentially trade flat. As you can see in the chart, this is becoming an extremely crowded trade: 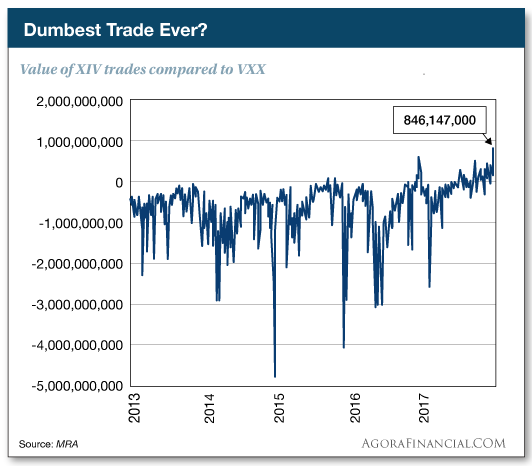 The biggest interest in this trade is coming from retail investors — people with zero experience trading the ebbs and flows of volatility.

“Don’t fall into the trap,” Louis urges. “When a sudden unexpected spike in volatility hits — and it will — anyone making this mind-numbingly dumb trade is going to be in a world of hurt.”

What to do instead? Louis says the smartest trade in the market right now involves a rare class of stocks — we’re talking a mere 0.05% of all the names that trade each day. They have an uncanny habit of doubling, or zooming up even five- or 10-fold… in a single day.

Best of all, to tap into these enormous gains you don’t have to play forex or options or anything exotic. And the next big opportunity might be only 13 days away. Louis explains all when you follow this link.

Wouldn’t you know it? The soothing words of Federal Reserve chair Janet Yellen have sent the VIX to its lowest level in two weeks.

Yellen is on Capitol Hill this morning, delivering the chair’s semiannual testimony to Congress. She said if inflation levels remain soft — the Fed’s preferred measure is currently 1.4%, way short of the 2% target — continued interest rate increases would be scaled back. “It’s something that we’re watching very closely considering risks around the inflation outlook.”

Finally, an acknowledgment of the reality Jim Rickards has been harping about here for weeks!

The dollar has strengthened a bit against the euro to $1.142, but weakened against the Japanese yen; it takes 113.2 yen to equal one dollar.

Crude prices are firming a bit after the Energy Department’s weekly inventory report, a barrel of West Texas Intermediate fetching $45.28.

Does this qualify as “pump and dump”?

Morgan Stanley has downgraded the stock of Snap Inc. (SNAP), the firm that makes the Snapchat messaging app. This would not be worth noting in our digital pages save for the fact Morgan Stanley was the lead underwriter for Snap’s IPO back in March. Heh…

Supposedly Morgan Stanley has had a change of heart about Snapchat’s ability to compete with Facebook’s Instagram app. Which is amusing because back in May our Greg Guenthner explained how Facebook CEO Mark Zuckerberg tried to buy Snap in 2013 and was rebuffed. He immediately set about replicating Snapchat’s features and has succeeded swimmingly.

The mainstream is hitting out at cryptocurrencies like Bitcoin again.

“The cryptocurrency Cassandras are starting to look right,” says Bloomberg. “The sector has lost about a third of its market value since peaking in early June, pushing it into what traditional equity market analysts label as a bear market.”

Cue the global chief investment strategist at BlackRock, Richard Turnill, speaking yesterday in New York: “When we look for signs of excess in the market, I look at Bitcoin and to me that looks pretty scary.”

To its credit, Bloomberg got the opposing side: “I would be surprised if there was a major crash,” said Brad Garlinghouse, whose money-transfer firm Ripple is hip-deep in cryptocurrencies. “Could we see digital assets continue to double or triple or quadruple from where we are today? That wouldn’t surprise me at all.”

We have no idea who’s right… and fortunately you don’t have to know who’s right to make a fortune off the cryptocurrency market. As long as you’re willing to try something new and you’re willing to part with $20, you can position yourself for a massive windfall starting in less than three weeks.

We can’t help indulging in the snicker-worthy headlines of late about the demise of ads for erectile dysfunction drugs during NFL games: Yahoo says the phenomenon points to a “softening ad market.”

[Ed. note: In pursuing this topic, we must tread carefully — and not just because of the subject matter. Too many mentions of brand names and we might not make it past your email provider’s spam filter. So if our prose seems a little stilted, that’s why.]

After 20 years on the market, the leading brand — the blue one — is about to face generic competition. Its maker, Pfizer, spent $31 million on NFL spots last season, according to iSpot.tv. This season? Zip, says the trade magazine Ad Age. (By now, large blocks of commercial time for the fall are usually booked.)

The other big brand — the one with the goofy bathtub imagery — will lose its patent protection halfway through the NFL season, and its maker, Eli Lilly, has been in no rush to snap up NFL ad inventory.

It’s not just the money the NFL and the TV networks will miss — it’s the viewer engagement. According to iSpot.tv, the typical commercial for the leading brand is watched 75% of the way through.

Really? Those lame commercials the last couple of years featuring a woman in a jersey talking to the camera? Far better were the ones with the aspirational blue-tinted world in which no woman ever appeared: Even if you didn’t need an ED drug yourself, you sorta wished you did — just so you could be like that guy who used the horses in his trailer to pull his pickup truck out of the mud. By God, that was inspired brand advertising!

German police say they’ve cracked the case of the stolen giant gold coin, chronicled here in The 5 last March. Not that the coin has been recovered yet, however…

Early the morning of March 27, thieves broke into the Bode Museum in Berlin and snagged a “Big Maple Leaf” issued by the Royal Canadian Mint in 2007. It’s nearly 21 inches in diameter and weighs 221 pounds. At current gold prices it’s worth north of $4 million.

Early today, police raided 13 buildings around Berlin and arrested four people — all related to each other, all between ages 18–20. They’re acquainted, we’re told, with a guard at the museum.

The coin may be no more. “We assume that the coin was partially or completely sold,” says Carsten Pfohl of the Berlin state criminal office. Police have confiscated cars and clothes — which will be combed for any traces of the Midas metal…

P.S. We love hearing from happy readers: “Ray, I’m On My Way To Becoming a Marijuana Millionaire!” says a satisfied reader of Penny Pot Profits.

Ah, yes, that was Ray Blanco’s recommendation last Thursday. He urged readers to sell yesterday if they hadn’t already.

More is coming. If you don’t want to miss out on the next lucrative penny pot stock trade, here’s where you need to go.