Bitcoin Shouldn’t Be This Hard

We must have glanced away at the moment someone photobombed Federal Reserve chairwoman Janet Yellen during her congressional testimony on Wednesday.

Only this morning did the incident come to our attention. Here it is, memorialized for all time in this screengrab from Bloomberg TV… 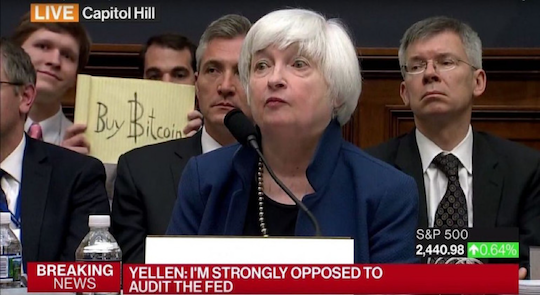 Heh… Not that she could see was happening behind her, but the expression on Yellen’s face is still priceless…

The identity of “Bitcoin Sign Guy” remains unknown to us 48 hours later. But shortly after the incident, someone claiming to be his friend tweeted a bitcoin address where cryptocurrency fans could send the man donations. And just to assure folks this was no scam, the friend tweeted out this picture… 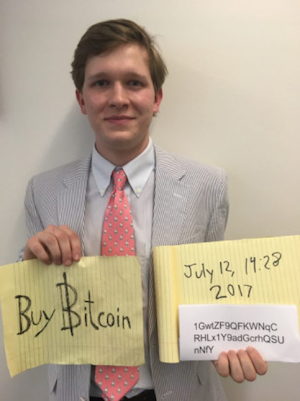 Props for ingenuity, we say. But really, there are far easier ways to make money from cryptocurrencies than venturing to Washington, D.C., and doing a bit of performance art.

In fact, our research team recently discovered a way to get rich off Bitcoin that doesn’t require you to know a thing about blockchains or “mining” or “wallets.” All you need is $20 and the willingness to try something new. Follow this link and you ’ll see exactly what we’re getting at.

To the markets… where a raft of sickly economic numbers has pushed up gold about 1%, to $1,230.

They’re so weak that traders are sniffing out even more of an “easing” stance from the Federal Reserve than Yellen telegraphed two days ago. The dollar index has weakened to 95.2 — its lowest since early October — and finally dollar weakness is once again translating into gold strength.

The major U.S. stock indexes are all in the green, but not by much. At 21,573, the Dow has added 20 points to yesterday’s record close.

Earnings season is underway with three of the big four commercial banks reporting: Citi, JPMorgan Chase and Wells Fargo all beat expectations, but the details disappointed. All three are in the red this morning.

The outlook for interest rates — “lower for longer.”

Yesterday Jim Rickards told us how Yellen’s testimony this week signaled a policy flip-flop: After more than six months of steady increases in the benchmark fed funds rate, the process is now on hold.

Our income specialist Zach Scheidt, meanwhile, was hoping against hope for a different outcome: “I was listening for any statements that might point to the Fed raising rates more aggressively to help savers earn higher returns on their nest eggs.”

As we mentioned both yesterday and the day before, no such luck. Falling inflation rates are giving the Fed the willies. “That means the Fed will likely slow down its plan for hiking rates and may even lower interest rates in the future,” Zach says, “depending on inflation levels.”

But wait, there’s more: Yellen also said the Fed’s “neutral level” for interest rates might be lower than previously thought.

“So Yellen’s congressional testimony this week certainly paved the way for less aggressive rate hikes and a prolonged period of low interest rates for savers.”

Sorry to be the bearer of bad news. That said, if you’re looking for income and you’ve got $20,000 to invest, Zach has an excellent workaround.

Fingers crossed, but it looks as if the next raid on Social Security is still a few years off.

Or so we’d conclude from this year’s report just issued by the Social Security and Medicare trustees.

We should rewind a bit: In 2015, the trust fund for Social Security disability — that’s separate from the one for retirees — was set to be exhausted within a year, forcing a 20% benefit cut.

So when President Obama and House Speaker Paul Ryan hatched their “zombie budget” deal, they shored up Social Security disability by killing the file-and-suspend strategy many couples were using to maximize their old-age benefits. Doing so staved off the day of reckoning until 2022.

Fast-forward to 2017 and the new trustees’ report says the day of reckoning has been pushed all the way back to 2028. Seems they expect fewer people to apply for disability — in large part because many people who might apply will have turned 62. That is, they can apply for early old-age benefits instead.

So what about the old-age and survivors trust fund? The trustees’ latest estimate is that it will be exhausted in 2034, at which time benefits would have to be cut 25%.

Two years ago, they also figured on a 2034 time frame. But our own David Stockman said a more rational estimate was 2026. Given his capacity for truth-telling and his number crunching — he was Reagan’s budget director for five years — we take David at his word.

By the way, the trustees also say Medicare will be in OK shape until 2029. Given the trajectory of health care costs, that estimate is even more fanciful than the one for Social Security…

As we mentioned earlier this week, Nevada’s first month of legal recreational cannabis is not going smoothly. The governor endorsed a “statement of emergency” issued by the Department of Taxation: There’s a dearth of licensed distributors because licenses are given only to existing alcohol distributors. (In other states, the dispensaries can transport the plant themselves; Nevada must have a mighty powerful booze lobby.) Thus there are shortages at the dispensaries.

“Depending on the locale, recreational pot is taxed between 33% and 38% in Nevada — and with Nevada’s pot tax revenues expected to hit $60 million over the next two years, any shortfall becomes a huge problem for the state’s budget, particularly for schools, which are budgeted to receive a big chunk of that marijuana tax money.”

So yesterday the commission approved an emergency regulation change — allowing businesses other than booze wholesalers to obtain distribution licenses.

“If Nevada’s statement of emergency is any indication of what’s to come as pot becomes a tax cash cow in other states,” says Ray, “the opportunity is immense.”

Ray’s Nevada-based recommendation in Penny Pot Profits is up 200% in less than six weeks. And more opportunities like it are in the offing.

“Thought you guys might like to see this,” begins today’s mailbag, “in light of your ongoing thread about ballooning pension liabilities and subpar investment decisions by incompetent pension fund managers who’ve missed the longest bull market in history.”

The reader points us to an article in the San Francisco Chronicle that begins thus: “San Francisco has a staggering $5.8 billion pension liability, and a series of retroactive benefit increases approved by voters over a dozen years is largely to blame, according to a recently released civil grand jury report.”

The city’s cost of salaries and benefits has grown 33% over the last 10 years — a pace expected to continue five more years.

Back to our reader: “But don’t blame the cabal of politicians and city employees who actively campaigned to put these policies into place. It’s much easier to just blame the voters! Move along, nothing to see here…”

The 5: Hey, the voters were doing only what the police unions and the teacher unions were asking them to do. It’s for the children! And safe streets! Who’s against that?!

“You didn’t tell us who it was, actually, that purloined the Big Maple Leaf,” writes one of our regulars, teeing up one of our favorite punching bags.

“I’m guessing it was Jon ‘Sorry, I lost your $1.6 billion’ Corzine, but then you noted the perp was in custody. So knowing banksters never actually go ‘into custody,’ maybe I better try another suspect.”

The 5: Under German law, the surnames of criminal suspects aren’t made public. But the state radio and TV outlet Deutsche Welle is nonetheless shedding new light on the giant gold coin caper.

Because prosecutors say the suspects come “out of the circle of Arab clans,” it’s not a huge leap to speculate the perps hail from one of the city’s Lebanese mafia families.

Berlin had a sizeable influx of immigrants fleeing Lebanon’s 1975–1990 civil war. A handful of them got into drugs, prostitution — and the occasional spectacular robbery. “In 2009, for instance,” says Deutsche Welle, “thieves broke into Germany’s most famous department store — the KaDeWe in western Berlin — and got away with some 7 million euros worth of jewelry, which has never been recovered.”

As for Corzine, whose status we last updated in January, he was spotted this week teaching summer semester at the British campus of New Jersey’s Fairleigh Dickinson University.

According to the Observer website, Corzine is leading “a course on global issues to undergraduate students, focusing on the causes, economics and public policy of youth homelessness.”

As the cool kids would say, “Random…”

But that’s just a sideline. In May The New York Times did a lengthy “Corzine comeback” article. Seems he’s eager to launch a hedge fund, but not just any hedge fund. “He will seek to anticipate what often seems unpredictable: how the Trump administration and other world leaders will enact policy and, in turn, move markets.”

Oh, there’s no potential for any funny business with that, now, is there?

What’s more, The Denver Post’s “Cannabist” website informs us that “total sales for the first five months of 2017 were up roughly 27%. And that year-to-date growth rate has held steady for two months in a row.”

There’s no reason you can’t grab some of that growth for yourself. Start here.