Turn the Tables on Wall Street

Our own voluminous archives include a reader who wrote in six years ago, observing, “There has never, in all of history, been a time when the markets have been so corrupted.”

At the time, we observed that insiders have always had an advantage. We also observed that their shenanigans had little effect if you were investing for the long haul.

Still… we understand the impulse to turn the tables. Earlier this year the Agora Financial team set out to find a way you can do just that.

The results are even better than expected. In the course of our research we uncovered a way to double or triple your money — or better — in the space of a week.

To illustrate how the system is rigged, we turn to the case of NRG Energy (NRG), a $7.1 billion electric utility.

Last week the newest member of our team, 25-year trading veteran Alan Knuckman, noticed some funky activity in NRG call options. (Call options, as you might know, are a bet that a company’s share price will go up.)

“Someone bought a lot of cheap call options last Monday,” says Alan. “In particular, the $17 call options expiring July 21 had a volume of 18,000 on Monday — most of them being ‘buys’ for $25 per contract.

“That’s an insane amount of buying volume, considering the few days prior only had a couple hundred orders.

By Friday, NRG closed at $23.24. And those options were even more valuable.

“THIS IS EGREGIOUS !!!” said the email from Alan when he first brought this market action to our attention. We’ve preserved the all-caps and exclamation points for authenticity.

“Someone knew something about that stock,” he went on. “And if they cashed out at $550, we’re talking about nearly $10 million in pure profit!”

Again, all in the space of a week.

This kind of action lines up perfectly with the “7-Day Fortunes” strategy Alan has brought to Agora Financial. At the center of the strategy is a patent-pending indicator. “By sorting through billions of data points,” says Alan, “this indicator gives us the chance to piggyback the insiders who (I think) have the advantage when it comes to trading.”

If you feel as if Wall Street’s a rigged game, there’s no better way to even the odds. Follow this link and Alan will show you how it all works.

The major U.S. stock indexes are inching higher into record territory as a new week begins. At last check the Dow has added 12 points, just enough to crest the 21,650 mark.

Treasury yields are backing down a bit. Gold is up $5, to $1,233. Volatility as measured by the VIX, which hit a 24-year low on Friday, is inching up slightly.

The big economic number of the day comes from China, where the government says second-quarter GDP grew 6.9% year over year. Yes, China’s economic numbers are even more heavily gamed than America’s, but the raw number isn’t nearly as important as the trend: At this pace, 2017 might be the first year Chinese growth accelerates since 2010.

Seventy-two hours after JPMorgan Chase CEO Jamie Dimon went on a foul-mouthed rant, we’re still hard-pressed to come up with any kind of reaction.

We knew about it as it was happening on Friday. We just didn’t have anything we felt would advance the discussion.

In case you missed it, here’s the money quote from Dimon’s post-earnings conference call: “It’s almost an embarrassment being an American citizen traveling around the world and listening to the stupid s**t we have to deal with in this country. And at one point we all have to get our act together or we won’t do what we’re supposed to for the average Americans…

“Since the Great Recession, which is now eight years old, we’ve been growing at 1.5–2% in spite of stupidity and political gridlock, because the American business sector is powerful and strong… What I’m saying is that it would be much stronger growth had we made intelligent decisions and were there not gridlock.”

We give the floor to our own Jim Rickards… 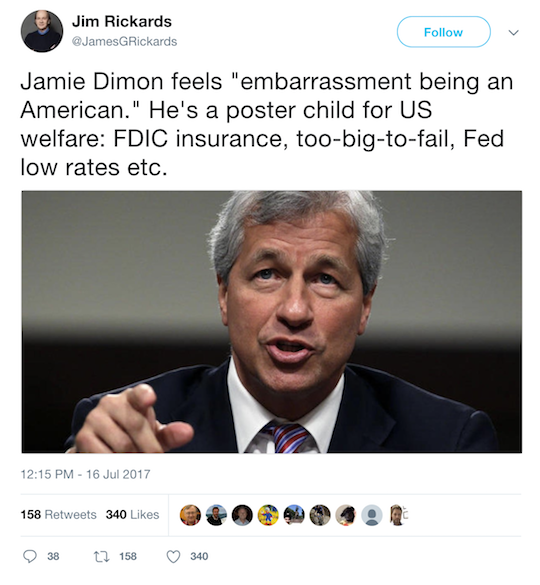 Jim’s tweet reminds us this is par for the course for Dimon. A while back, we noted an interview he did in New York magazine. The reporter suggested that maybe in exchange for an infinite taxpayer backstop the megabanks should be subject to some level of regulation.

Dimon’s response: “This is not the Soviet Union. This is the United States of America. That’s what I remember. Guess what? It’s a free. F***ing. Country.”

Sigh. We’ve been chronicling Jim’s laundry list of favors for the big banks for so long now we might be losing our capacity for outrage…

For the record: The White House just upped its projection for fiscal 2017’s budget deficit from $603 billion to $702 billion.

That’s a huge revision after only two months. But tax revenues aren’t coming in as strong as expected.

We know it’s sort of unfashionable to talk about the deficit these days. Republicans in the Trump era don’t bother giving even lip service to “fiscal responsibility” or “small government” anymore. But we’re unabashedly old school that way…

Medicine is about to enter a new era: The feds are on the verge of approving the first therapy that genetically alters a patient’s own cells to combat cancer.

“Instead of using toxic chemotherapy cocktails, this therapy uses gene editing and a patient’s own cells to create a cancer cure,” explains our science-and-wealth maven Ray Blanco.

“Novartis takes millions of immune system cells from a patient’s blood. It then processes those cells — editing their genes so that they vigorously attack cancer cells when put back into the patient.

“The technology is called CAR-T. Other companies are working on this technology, but it appears that Novartis will be the first to make it to market.

“Being first to market, however, doesn’t always make for the final win,” Ray cautions. “Many times, a better product can come along later and ‘leapfrog’ an earlier-generation technology.”

Ray suspects that’s what will happen here. The Novartis treatment costs half a million dollars… it must be customized for every patient… and many patients in CAR-T clinical trials reject the edited cells when they’re injected into the body; a few have died from the reaction.

What’s needed is a way to mass-produce cells, bringing down costs. Furthermore, a way needs to be found to manage the cytokine storm.

As it happens, Ray has a recommendation in his entry-level newsletter Technology Profits Confidential that addresses all three of those issues. The stock has been a slow mover, but human clinical trials are near. We’ll stay on top of it…

We know Bay Area real estate prices are out of control. But really — $850,000 for a house that’s nearly teetering on the edge after a landslide a few months back? 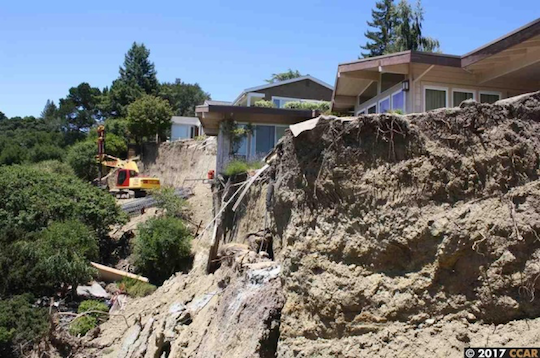 “Grand home on a quiet cul-de-sac has met misfortune,” says the frank listing for this four-bedroom three-bath home in Lafayette, in the East Bay. “This is not for the faint of heart. Landslide at the rear of the home, house is currently red tagged.”

The best part? “House is priced to reflect the cost of repairs.” Which might well be the case. As Adam Brinklow notes at Curbed San Francisco, even some vacant lots in Lafayette list for more than $850k.

For the record, the average Bay Area home runs $890,000 these days. And the statewide median in California is $500,000, twice the national figure.

To the mailbag, where a reader weighs in on our item last week about the Social Security trustees pushing back the date of reckoning for the disability trust fund to 2028.

Their rationale is that many people who might apply for disability will have turned 62 and will take old-age benefits instead. “That may be true in part,” our reader writes, “but there is another reason they don’t want people to know about until it is too late.

“Seems at some point they also changed the requirements to qualify for SS disability. In 2014 I was injured and after surgery, recovery and therapy found I could no longer work at my trade. So in 2015 I went to apply for SS disability. That’s when I found out I no longer qualified under the new requirements. The old requirements were a points system based on your lifetime contributions and you had to have 30 or more points to qualify. That is still the case, but they added that 20 of those 30 points had to be from the 10 years prior to the disability claim.

“The kicker: In 2008 I was downsized out of my well-paying company job (as were a great many others) and to make ends meet became self-employed at a greatly reduced income. This also drastically reduced my SS contributions. Back to 2015, I found that I had more than the 30 required points from lifetime contributions, but because of my recently reduced contributions I did not meet the 20 points from the previous 10-year requirement. So no SS disability.

“This is probably the case for the millions who had the same thing happen to them in 2008/9, and so they also no longer qualify for SS disability, whether they know it or not. This means the SS trust(less)ees no longer have to count them as possible disability applicants. Voila! The SS disability trust fund is saved!

“Another way our fearless political leaders and their bureaucrat minions figured out to not have to make good on their promises we have all been paying for all our lives.”

The 5: Interesting. But not surprising.

As we’ve long pointed out, Social Security has been effectively defaulting on its promises for decades. Remember the one about how your benefits would never be considered taxable income? Yeah, that went away more than 30 years ago.

More recently, as we noted last week, the feds did away with file-and-suspend — a technique many couples and divorced women used to maximize their benefits until it went bye-bye last year.

Just wait till they trot out that old chestnut of “chained CPI” so they can lower the annual cost-of-living increases. That one was kicked around back in 2011. We wouldn’t be surprised to see it revived eventually…

P.S. As Social Security’s trustees keep breaking their promises, seniors across America are taking advantage of a way to help pay for retirement — up to $1,659 per month in investment income — thanks to a little-known provision in the Medicare Act.

No, it’s not a handout. And every American, no matter your age, is entitled to take part.

We return to the saga of the Nord Stream 2 pipeline, and just as military warfare can sometimes take an unexpected turn… so can economic warfare. Read More

“Every year in September, Apple holds a keynote event,” says tech authority Ray Blanco. “Investors… see it as an opportunity to make some profits.” Read More