Gold has been a snooze this week — sitting at or just below the $1,270 level.

But the action off its lows four weeks ago is promising, says our newest trading specialist Alan Knuckman. “It’s quietly sneaking up to $1,300 an ounce again,” he says in a video that went to every reader of Weekly Wealth Alert. “That was the high in April and June, so let’s see if it can punch through this time.” 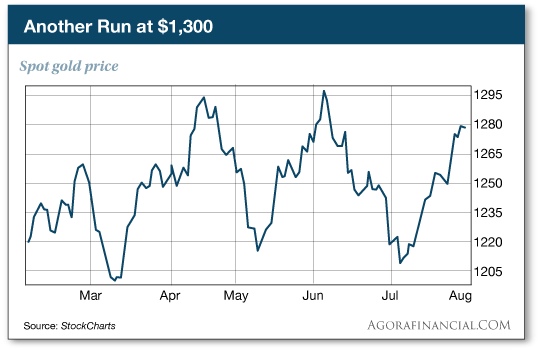 Yesterday, Jim Rickards identified a boatload of reasons gold is set to jump — central banks on the verge of “easing” monetary policy, brewing trouble in global hotspots like the Korean Peninsula, discord in Washington.

None of that matters to Alan. He’s a chart guy. Still, it’s reassuring to know that gold looks constructive from both a “fundamental” and “technical” point of view.

What’s most relevant for Alan’s readers, though, is a funky spike in options trading on one of the major gold miners. This is the “somebody knows something” activity that’s key to his short-term profit recommendations. He spotted it on Monday; the story will play out no later than a week from tomorrow.

By the time you read this, it might be too late to take advantage of this particular trade. But Alan’s patent-pending indicator is always serving up new opportunities, and they all play out in less than two weeks. Follow this link to learn more about how Alan’s trade recommendations work.

Meanwhile, the Dow industrials are inching higher into record territory. The Big Board has added 12 points at last check, to 22,028.

This morning marks the fourth time the president has tweet-touted the stock market’s performance since Saturday. 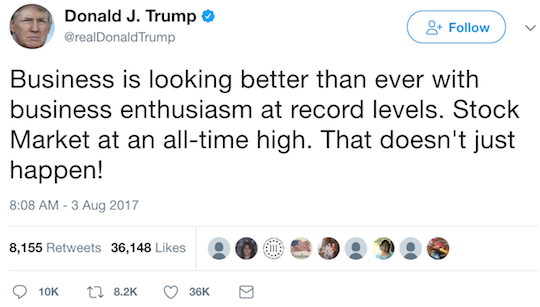 Gee, what happened to the “big fat ugly bubble” he warned about in the debates last fall?

As we’ve pointed out more than once, the “Trump bump” looks more like a continuation of a rally going back to February of last year… 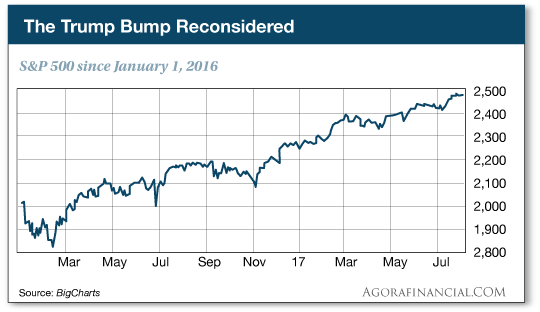 “I wouldn’t be surprised if Trump’s tweet marked the beginning of a late-summer pullback in stocks,” says Greg Guenthner in today’s Rude Awakening.

We’re overdue. The market hasn’t experienced a 5% pullback all year — in contrast to two such episodes last year. Now’s as good a time as any.

Historically, “August can be a trying month for traders,” Greg adds. “A 5% pullback would scare plenty of weak hands out of stocks and provide the perfect setup for a blazing fourth-quarter rally. Most investors have forgotten what a pullback even feels like. Even a mild correction could induce some serious short-term panic.”

And if a more serious crash takes place in the next week, well, it’s in the stars. Or, more accurately, the moon.

It’s been nearly two years since we’ve written about one of our favorite offbeat indicators, the Puetz window.

Puetz ran the numbers and concluded the odds of these circumstances being sheer coincidence were 127,000-to-1.

Don’t say we didn’t warn you: “Congress will return next month from August recess with no clear road map for avoiding the first-ever default on the nation’s debt,” says a story at Politico.

Amid a host of manufactured controversies in Washington (Russia! Russia! Russia!) the mainstream is finally waking up to the very real warning our David Stockman issued late last year — that the debt ceiling will take a wrecking ball to the Trump economic agenda.

Politico has a painfully long story today about the present state of play. Here’s the gist: House Speaker Paul Ryan and Senate Majority Leader Mitch McConnell want to pass a debt-ceiling increase with no strings attached. That will surely anger some Republican backbenchers who want to see spending cuts as part of the deal.

“That means McConnell (R-Ky.) and Ryan (R-Wis.) will have to rely on Democrats and enough moderate Republicans to help them avert a financial catastrophe by Sept. 29, the day Treasury exhausts its borrowing authority and the very last day for Congress to act.”

Democrats? Good luck with that. It’s an unwritten rule in Washington that the opposition party gets all huffy about “fiscal responsibility” during a debt-ceiling showdown.

[Let’s turn the wayback machine to March 2006, when George W. Bush was president. “The fact that we are here today to debate raising America’s debt limit is a sign of leadership failure,” said an up-and-coming Democratic senator from Illinois named Barack Obama. “It is a sign that the U.S. government can’t pay its own bills… I therefore intend to oppose the effort to increase America’s debt limit.”]

David Stockman — a veteran of D.C. budget battles both in Congress and the White House — says Congress has all of 15 working days before the deadline.

“The impending bloody struggle over the FY 2018 budget resolution and the debt ceiling/continuing resolutions will not only shock Wall Street,” he says now, “but it will also completely preempt the legislative calendar through the end of the year and beyond.”

If a debt-ceiling showdown doesn’t sink the markets, how about a war between nuclear-armed China and India?

We mentioned the possibility last month when Chinese troops started conducting live-fire drills near a disputed section of the border with India. India has neither forgotten nor forgiven its defeat at the hands of China after a border war in 1962.

Now China says Indian troops in the area must retreat before any talks can begin. “No country should ever underestimate the resolve of the Chinese government and people to defend China’s territorial sovereignty,” says a statement from the Chinese foreign ministry.

As before, we caution that it’s not as if war is going to break out tomorrow. But we’d be remiss not to mention from time to time if the situation heats up or cools down…

Bitcoin options are already in the works, so why not Bitcoin futures too?

The Chicago Board Options Exchange just took a critical step toward launching Bitcoin futures before year-end. The CBOE has signed a deal to obtain Bitcoin market data from Cameron and Tyler Winklevoss — the twins best known for their legal battles with Facebook founder Mark Zuckerberg. (The Winklevii have been trying for years to launch a Bitcoin ETF, but they’ve been rebuffed by the feds.)

As we mentioned a few days ago, a Bitcoin options exchange will launch this fall. Options, futures and other derivative instruments thrive on big price swings. Bitcoin has had plenty of ‘em this year, unlike stocks and other traditional asset classes, hence the demand from high-powered traders.

But to us, it still looks like gilding the lily when plain-vanilla cryptocurrencies can deliver enormous gains in a matter of days or weeks.

From Washington come encouraging new developments for the future of penny pot stocks.

Yesterday Sen. Cory Booker (D-New Jersey) proposed a bill ending the federal prohibition on marijuana and pushing the states to do likewise, withholding federal funds for law enforcement and prisons if they don’t.

Ambitious, for sure. Many pro-legalization writers are dismissive: Mike Riggs at Reason says the bill “will likely never come up for a vote or obtain a single Republican co-sponsor.” But we daresay passage might not be Booker’s prime objective here.

Booker’s no political fool; he’s getting out in front on the marijuana issue before any of his potential rivals in the Democrats’ 2020 presidential race.

That includes rising star Sen. Kamala Harris — who, when she was running for re-election as California attorney general in 2014 literally laughed on stage at the suggestion of legalizing recreational cannabis. (Which is exactly what will happen in California next Jan. 1; Harris has since changed her tune, of course.)

Legalization advocates are playing a long game, even as the short-term profit opportunities are there for the taking now.

Mr. Medenwald is chairman of a group called North Dakota Open on Sundays. Until this week, we were unaware that North Dakota is home to the nation’s most extensive “blue laws.” It is illegal to buy cars, apparel, housewares, furniture, appliances, lawn mowers — a whole laundry list of items, really — before noon on Sunday.

Medenwald is trying to gather enough signatures to put a repeal of those laws up for referendum in 2018. “North Dakota doesn’t dictate to farmers when to farm, hospitals when to practice medicine or restaurants when to feed people,” he writes. “We are simply asking that all businesses, not just a chosen few, be allowed that same freedom.”

He’s right about a chosen few. Over the years, a boatload of exemptions have been written into the blue laws — pharmacies, restaurants and so on. Heck, even bars and liquor stores can open at 11:00 a.m.

[Which makes sense, when you think about it. Facebook data tell us the Minnesota Vikings are the team of choice in most of North Dakota; if you’re going to watch the Vikings play awful football for three hours starting at noon, you need to get hammered starting at 11.

Yes, that’s a cheap shot from a Packers fan — heh.]

“You can add me to your list of Bitcoin skeptics,” a reader writes.

“When I was a working journalist, one of our mantras was ‘Consider the source.’ Later, when I was learning about investing, I was told, ‘Don’t invest in anything you don’t understand.’ To that was added don’t hold investments that keep you awake at night. Then there was some sort of blather about ‘real, tangible assets.’

“Call me old-fashioned, but currency that’s ‘virtually’ impossible to understand has no real tangible existence and springs from an anonymous source would keep me up at night.”

The 5: Even if you took a flier on cryptocurrencies with just $20?

That’s what makes this an exciting time to speculate in the sector, even with only a little bit of mad money. Cryptocurrencies have moved beyond the true believers who hope to undermine central banking and fiat currency. (We’re doubtful whether they’ll succeed, even as we wish them well.) There’s a go-go, Wild-West appeal to the whole thing right now — which is a stage that occurs long before anything resembling a bubble, by the way.

No, of course you don’t want to bet your retirement or the grandkids’ college fund on it. But if you play it right, you could pad that account very nicely with a well-chosen crypto vehicle.

P.S. Seeing as it’s the proverbial dog days of August and most markets are so calm right now… The 5 is going to take a rare day off tomorrow even as the markets are still trading.

[Just watch: Something will happen to throw the markets into a tizzy.]

We’ll have our weekly wrap-up edition, 5 Things You Need to Know, on Saturday and return with our regular weekday episodes on Monday.