Dimon was on a conference call with Wall Street analysts, going over his firm’s quarterly numbers. Some of them wanted to draw him out on his remark last month that bitcoin is “a fraud. It’s worse than tulip bulbs and it won’t end well.”

The analysts were too polite to point out that Dimon has a hard time recognizing a fraud when it’s happening in front of his face. In 2014, JPM forked over $2.6 billion to the feds and to the victims of Bernie Madoff’s infamous fraud that collapsed in 2008; prosecutors said “the Madoff Ponzi scheme was conducted almost exclusively” through accounts at JPM. 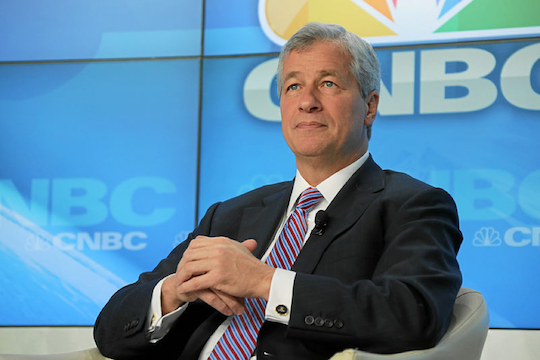 See no Ponzi, hear no Ponzi, speak no Ponzi… [Flickr photo by the World Economic Forum]

All told, JPM forked over $36 billion in fines and settlements for various and sundry misdeeds between 2011–16. (Oh, and wait till you hear where the company scared up the money to pay some of those fines. We’ll get to that later in today’s episode.)

Whatever. As we said last week, Dimon knows how cryptocurrencies threaten to gore his ox. And there’s no stopping them…

“Cryptocurrency is the most exciting thing I’ve seen since I first used the world wide web in 1992,” says crypto-millionaire and Agora Financial contributor James Altucher.

James has been big on digital currency since its advent in 2009. He likens the recent crypto backlash to the time when people said the internet was a passing fad and only for basement-dwelling hacker types.

James’ take on cryptocurrency? It’s here to stay… and it’s not just for computer nerds. “Cryptocurrencies,” he said recently, “will be the only chance in our lifetimes to make 100,000% on our money.”

That’s a sky-high rate of return but James has sound reasons to buy into crypto now; he might just settle some of your qualms about the nature of crypto and why it’s not going anywhere.

First, James says cryptocurrency is the next step in the evolution of currency — and 5,000 years of progress. Take a look at James’ nifty summary of currency’s march to crypto: 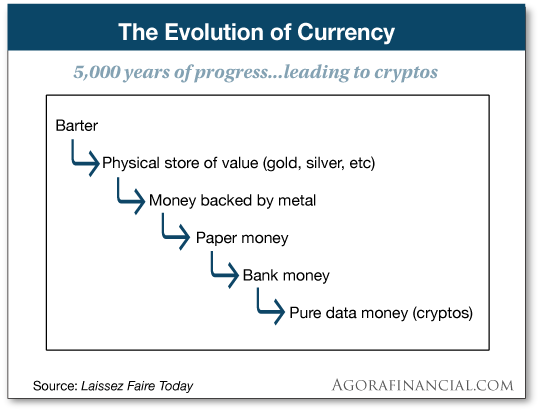 Humans are hard-wired to throw stones at progress and settle for the status quo. That’s why financial big shots like Jamie Dimon tweet bitcoin’s a passing “fad”… but James is right to ask, “What’s his agenda?”

“Jamie Dimon runs a bank with dollars in it,” James notes. “If people stopped using dollars, they would stop using Jamie Dimon’s bank. So of course he’s going to say bitcoin is a fad. He doesn’t want his bank to go out of business.”

James concedes most cryptos are frauds: “95% of cryptocurrencies are scams or will go to zero.

“Like any field that is ‘hot’ the scammers have arrived. Ponzi schemes. Fake currencies. Hacked exchanges, etc.

“What is my agenda?” he asks. “I want to make a lot of money by identifying which cryptocurrencies are legit and which are not. I’ve built the team and network to do that. I also am happy to always be the first in trends.”

You’ll want to hear firsthand how James Altucher and his team of contacts have “cracked the code” on crypto… and how you can play the market for 1,000 times your money.

That’s why he’s organized an exclusive live event this coming Monday at 1:00 p.m. EDT. You won’t want to miss it. Click here now to reserve your seat to James’ FREE webinar.

Once again, the major U.S. stock indexes are hugging all-time highs. At last check the Dow is off fractionally at 22,867. Other asset classes are proving more interesting.

Gold rose and the dollar fell yesterday after the Federal Reserve sent mixed messages within the minutes of its September meeting.

At the risk of repeating ourselves, Fed “minutes” are not an objective record of who said what; they’re not like the minutes from your local school board meeting. They’re a political document aimed at telegraphing a certain message to the markets.

Only in this case, the message was contradictory. On the one hand, Fed pooh-bahs still appear bound and determined to raise the fed funds rate in December. On the other hand, they’re worried about falling inflation rates, which would argue against a rate increase.

You think the Fed is subconsciously admitting it has no idea what the hell it’s doing?

Commodity and currency traders aren’t buying the rate-raising thing; the dollar index is down to about 93 while gold is seven bucks away from $1,300 again.

Traders in fed funds futures, however, are still pricing in an 87% probability of a December increase. Jim Rickards says the probability is still zero, although he allows it might be several more weeks before the market comes around to his point of view. Heh…

On this first day of earnings season, the aforementioned JPMorgan Chase beat analyst expectations. So did Citigroup. But it’s something on JPM’s balance sheet from a few years ago that we find more newsworthy.

Nearly six years ago, in February 2012, JPM was fined $5.3 billion under the National Mortgage Settlement reached with Attorney General Eric Holder. It was one of those sweetheart deals Holder cut over and over with the big banks — cost-of-doing-business fines instead of criminal charges, in keeping with his “too big to jail” policy.

However, as financial muckraker David Dayen reports at The Nation, only $1.1 billion of that $5.3 billion total had to be paid in cash; “the other $4.2 billion was to come in the form of financial relief for homeowners in danger of losing their homes to foreclosure.”

Here’s the rest of the story: “JPMorgan moved to forgive the mortgages of tens of thousands of homeowners; the feds, in turn, credited these canceled loans against the penalties due under the 2012 and 2013 settlements. But here’s the rub: In many instances, JPMorgan was forgiving loans it no longer owned… it had sold the mortgages years earlier to 21 third-party investors.”

The dirty details are now coming to light in a federal lawsuit being heard in New York. Grab the popcorn…

And now the newest entry in an occasional chronicle of bubble-priced real estate in the San Francisco Bay Area.

In Mountain View, home to Google, a house with less than 1,000 square feet in “distressed condition” has cleared the market in only weeks for $1.1 million. 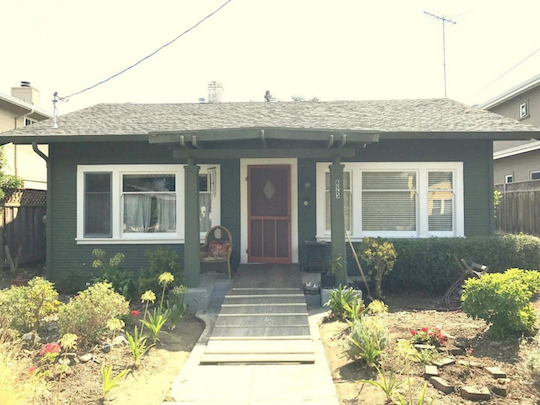 Ah, but it’s the conditions on the deal that truly stand out: The buyer could not look inside. The buyer would have to stump up for extensive repairs before closing. And to top it all off, the elderly seller could continue to live there rent-free for seven years.

Well, the sale price is a half-million less than the listing price.

San Francisco Chronicle real estate blogger Emily Landes sees method to the madness: “We’re thinking the buyer plans to develop the property, which sits on a 7,500-square-foot lot near the heart of downtown Mountain View. Maybe they are figuring that by the time the site plans are drawn up and approved it’ll be just shy of seven years anyway.”

Well, it does take forever to get permits in California…

A quick update on our previous entry in this chronicle: In July we mentioned a listing for a house perched on the edge of a cliff — a cliff that exists because of a landslide that hit the East Bay community of Lafayette a few months earlier. 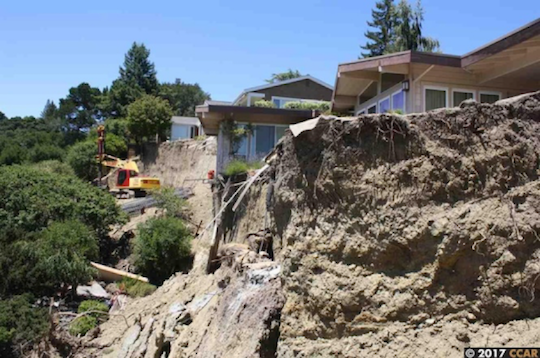 “No surprise the NRA gave no help to the concealed-carry permit holder shot and killed by the trigger-happy cop,” a reader writes. “They endorsed John McCain in 2008.

“At that time Bob Barr, former U.S. rep for Georgia, was the Libertarian candidate and on the NRA board and had an A+ rating from the NRA. McCain’s rating was well below A+. Clearly, the NRA is married to the Republican Party. Sad. I was a life member of the NRA at that time and quickly resigned my membership.”

The 5: Different people come to be disillusioned with the NRA at different times. Surely there are a few more such people this week after the organization’s sellout (and subsequent flip-flop) on “bump stocks.”

And there’s not much choice when it comes to alternative organizations. One, while more solid on Second Amendment issues, really does carry a whiff of racism, unlike the NRA. Another, at one time the most principled of all, has fallen into disarray since the death of its founder.

Oh, well. We’ve started wandering a little far afield from our original reflections on Tuesday about the gun rights of pot smokers. It’s been fun, but time to move on…

“I’d like to add to your recent corporate income tax commentary,” a reader writes.

In addition to the pluses we highlighted, “consumers benefit also, since this insidious tax is embedded in prices for goods and services and effectively paid by consumers. So a corporate tax break may well result in lower prices.”

The 5: We hope. No guarantees, though.

You’re absolutely right — and we’ve discussed it before ourselves — that existing corporate tax expenses ultimately get passed along to the consumer.

But we suspect the immediate savings from a corporate tax cut will more likely manifest itself in the form of share buybacks and dividend increases rather than lower prices for an iPhone or a bar of soap.

That is, the consumer benefit would take longer to materialize — and only in the form of prices rising at a slower rate.

But it’s still a good idea regardless…

As noted above, earnings season began today… and over the next six weeks, huge fortunes stand to be made. But only for those who act.

For obvious reasons, the offer at this link expires at midnight tonight.