“All We Need Is Leadership”

Hmmm…. Gold might be breaking out of a tight trading range this morning. And it might be because of the latest tax-reform rumors from Washington.

“The dollar slipped against most major currencies on Wednesday,” says a Reuters dispatch, “weighed down by worries over possible delays to Donald Trump’s tax reform plan.”

Generally, dollar weakness translates to gold strength. Thus the Midas metal appears to be busting out of a channel between $1,265 and $1,280 that’s held for the last three weeks. At last check the bid is $1,285. 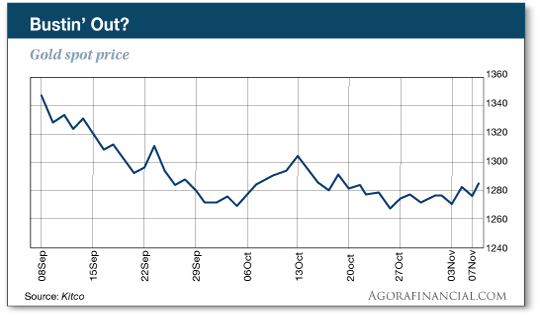 For all the Democrats’ complaints about the GOP tax plan as a “giveaway to the rich,” they’ve been careful with their rhetoric.

A few weeks before the election last year, when conventional wisdom said Hillary Clinton would win the presidency, the Democrats would take the Senate and the Republicans would keep the House… Sen. Chuck Schumer (D-New York) said something interesting.

Understand, Schumer was assuming he’d be the new Senate majority leader. So here’s what he said to CNBC: “We’ve got to get things done… The two things that come, that pop to mind — because Schumer, Clinton and Ryan have all said they support these — are immigration and some kind of international tax reform tied to a large infrastructure program.”

It all comes back to the massive quantity of money — the most recent estimate we’ve seen is $3.1 trillion — stranded overseas because of America’s Byzantine corporate tax system.

How did this happen? Start with the fact that America’s corporate tax rate — the nominal one, on paper, anyway — is the highest in the developed world. There’s a 35% federal rate and an average 4.1% state rate on top of that. 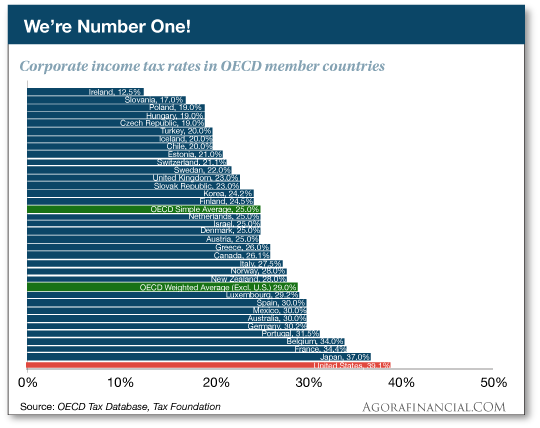 As a practical matter, however, few companies pay 39.1%. Among all large firms that turn a profit, the average rate is about 14%. And that average is deceiving because according to the Government Accountability Office, about 20% of large profitable firms pay no corporate income tax at all.

So the 39.1% tax rate is really closer to 14% and for many companies it’s effectively zero. How did the system become so godawful complicated?

Consider the case of Boeing and its French peer in aircraft manufacturing, Airbus. “Airbus faces lower rates than Boeing,” writes economist Veronique de Rugy from the Mercatus Center, “and is taxed on a territorial basis (at the rate in place in the country where the income is earned). Good for Airbus if it earns income in a country that has a lower corporate tax rate than France.

“More importantly, Airbus faces a lower rate than Boeing no matter where Boeing sells its planes, if the U.S. firm decides to bring its foreign income back home.”

Crazy, huh? As Ms. de Rugy explained last year in her syndicated column, “Years ago, lawmakers answered the call for reform by instead designing a loophole that helps companies avoid the heat of the U.S. rate by keeping their foreign income abroad, which is what many companies do.

“But sometimes that’s not enough and they simply renounce being American companies by incorporating abroad.”

Maybe you remember the squawking a couple of years ago about “inversions” — mergers that end up with a U.S. company moving its headquarters overseas. Per that chart above, Ireland was a favorite destination.

No one remembers now, but even President Obama recognized the system is a joke.

He proposed lowering the top federal rate on corporations from 35% to 28% although nothing got done thanks to his aloof approach to dealing with Congress. Trump at one time advocated a 15% rate; in the end he was willing to settle for 20%.

Wrote de Rugy last year, “It may be the one bipartisan issue out there. All we need is leadership.”

[Ed. note: Should corporate tax reform come about, it will be a bonanza for shareholders of the biggest companies with gobs of cash held overseas — starting with Apple.

But holding shares in those companies isn’t best way to profit from a new tax law. It’s not the way you can make 3,436 times your money, for sure. For those kinds of gains, you have to play tax reform a different way… and ideally you get started in the next 12 days, while the negotiations on Capitol Hill reach a fever stage. Details here.]

While gold is catching a bid today, the major U.S. stock indexes are treading water. At last check the Dow had shed 12 points, to 23,545.

Crude prices are slumping a bit after the latest weekly numbers from the Energy Department showed a surprise increase in inventories. A barrel of West Texas Intermediate is back below $57 now.

Maybe the whole Prince Mohammed power play in Saudi Arabia is just a blatant grab for cash to restock the kingdom’s coffers.

In addition to ordering the arrest of 11 fellow princes, Crown Prince Mohammed bin Salman is looking to confiscate up to $800 billion in cash and other assets — per this morning’s Wall Street Journal.

As we’ve documented periodically the last couple of years, the kingdom’s foreign exchange reserves are being drained at an alarming rate — from a peak of $730 billion in 2014 to $488 billion today.

Sure, the drop in oil prices since mid-2014 has a lot to do with it… but “MBS,” as the crown prince is known, has also funneled scads of money to hardcore jihadis in a failed effort to overthrow the Assad regime in Syria… and blown scads more money waging a genocidal war in Yemen.

Our cash-grab thesis is, admittedly, wishful thinking. The reality is that MBS appears dead set on exporting still more war across the Middle East.

Israel’s Channel 10 commercial broadcaster has gotten its hands on a leaked diplomatic cable… describing how Israel’s government is coordinating with Saudi Arabia to stir the pot against the common enemy Iran.

Suddenly, the resignation of Lebanon’s Prime Minister on Saturday — announced during a visit to Saudi Arabia — is making more sense. The cable instructed Israeli diplomats: “You need to stress that the Hariri resignation shows how dangerous Iran and Hezbollah are for Lebanon’s security.”

The analogy isn’t perfect, but Hezbollah is sort of like the IRA of Lebanon. It has a militia wing with Iranian backing… but it also has a political wing, and for years, it’s been part of the governing coalition in Lebanon. Prime Minister Hariri’s resignation — the Arab-language press says the Saudis have him under house arrest — might well be an attempt to lure Hezbollah into some sort of Lebanese power grab, which Israel could then latch onto to justify air strikes.

As we said yesterday, the likelihood of these proxy conflicts turning into all-out war between oil-rich Saudi Arabia and oil-rich Iran seems remains low… but the proverbial tensions are mounting. and Donald Trump appears determined to bring in America on the side of the Saudis and Israelis.

Bloomberg made a splash this morning with this story: “Apple Inc., seeking a breakthrough product to succeed the iPhone, aims to have technology ready for an augmented-reality headset in 2019 and could ship a product as early as 2020.”

Ray noted AR on a phone has a “major limitation — you…essentially have to hold your phone in front of your face to benefit from AR. You’ll need your camera to look around, and you’ll have to stare at your phone’s screen to see the information.”

The solution, Ray said back then, is wearable technology. “A…headset will alleviate those problems. Information can be projected onto a transparent surface covering your eyes, so information will be superimposed over what you are actually seeing.”

The best way to profit from AR technology, as Ray sees it, isn’t buying Apple stock. Apple’s a fine company, but it’s enormous and has its fingers in a lot of pies… best zero in on the companies supplying the critical components Apple will need to pull this off.

“Displays have to have high resolution. Batteries have to be light and powerful,” says Ray. “And there has to be a way for users to interact with a wearable AR device…keyboards and even touch screens are just too bulky and unwieldy.”

Ray recommends sticking with the “pick and shovel” guys — the behind-the-scenes companies that do the heavy lifting for AR technology and make the magic happen. Which is exactly what he’s doing in his various tech-themed publications like Technology Profits Confidential.

To the mailbag: “I’m wondering why, with all the conversation around the tax plan, why no one is bringing up the changes to the Inheritance Tax.

“Trump says the plan won’t benefit him. I guess technically he is correct, he will be dead, but it sure will benefit his family.  If you think the income disparity is bad now just wait until these families just roll over and continue to accumulate the wealth.  The top 1% will seem like a dream.”

The 5: Huh? We had a brief discussion of the estate tax twice in the last week. But our most recent in-depth take — one we suspect you’ll find eye-opening — came about two months ago.

“You guys crack me up!” a reader writes after Greg Guenthner’s on-the-spot report from weed central in Las Vegas.

“Don’t you realize that the ‘geezers and grandmas’ are the flower children and hippies from the 60’s? You gotta wake up youngsters, they still smoke pot. Many with their own adult kids. How’s about them apples, er buds?”

“I was never a big fan of MSNBC or CNN,” a reader writes on the topic of news sources. “Fox was my go to until a couple of months ago a fellow retired Navy LCDR friend introduced me to OAN (One American News).

The 5: Really? “Plain good ole news reporting” is expensive compared with getting a couple of pundits to show up in a studio and shout at each other.

P.S. As we go to virtual press, bitcoin has touched a record high of $7,800. We’ll get into the short-term catalyst behind the move tomorrow… plus some behind-the-scenes activity that could push it higher still.

If you still haven’t dipped your toe in the crypto waters yet, what are you waiting for? All it takes is $20 to get started.