The Establishment Aims to “Tame” Bitcoin 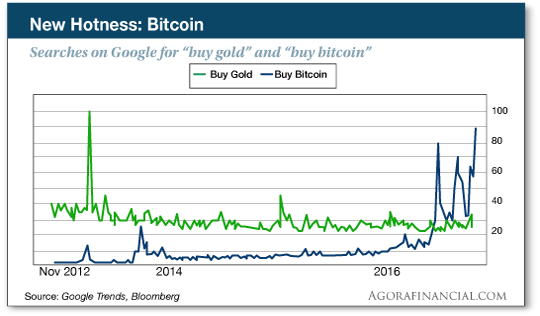 Little wonder: Gold is up about 11% year to date, compared with Bitcoin leaping sevenfold.

Last month we told you about plans for a “fork” in the bitcoin blockchain — literally splitting it in two. The new second set of links of the blockchain would consist of larger blocks that could make and record transactions faster.

Yesterday afternoon, those plans were called off. Said an email from the lead developer: “Although we strongly believe in the need for a larger blocksize, there is something we believe is even more important: keeping the community together.” The trade in “chain split tokens” — sort of a futures market for bitcoin — indicated 85% of users preferred original bitcoin.

Traders clearly had no idea what to make of the news… 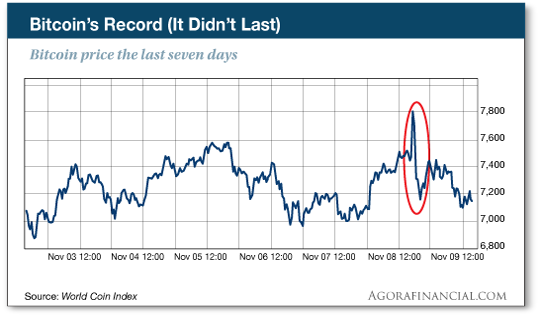 After quickly spiking to a record past $7,800, the price almost as quickly collapsed below $7,200. (No one ever said crypto was boring.) This morning it’s trading at $7,145 — which is still higher than it traded anytime before last Saturday.

Bitcoin is quickly becoming more than a cryptocurrency, in the estimation of high-finance heavy-hitter Leo Melamed.

Melamed was chairman of the Chicago Mercantile Exchange from 1969–1993. At age 85 he still holds the title of chairman at the exchange’s parent firm, the giant CME Group.

As we mentioned last week, CME Group is planning to introduce real bitcoin futures by year-end… to complement its well-known and heavily traded futures in the S&P 500, oil and gold.

This week, Melamed shed some more light on the firm’s thinking. He says there’s no reason bitcoin can’t become a full-fledged asset class like stocks or gold. Perhaps the best analogy, he says, is currency trading — which he launched in 1972 after overcoming initial skepticism.

“The world in the 1970s didn’t look at currency trading as a valid instrument of finance,” he tells the Reuters newswire. “I too went from not believing [in bitcoin] to wanting to know more…

Melamed also said this: “We will regulate, make bitcoin not wild, nor wilder. We’ll tame it into a regular-type instrument of trade with rules.”

If you want to read that conspiratorially, we understand. After all, CME Group is surely one of the key players in the schemes to keep a lid on the gold price. And the advent of bitcoin futures will make it possible for investors to short sell bitcoin — betting the price will go down.

But today at least, we choose to look at it from the glass-half-full perspective. Allowing short-side bets will attract major institutional investors to bitcoin — not just speculators.

In other words, an entire new class of investment pro will pile into bitcoin — as exemplified by Alan Knuckman, our own veteran of the Chicago trading pits.

We got an email from him this week acknowledging he was a skeptic — by his own admission missing out on that spectacular sevenfold run-up this year.

“My skepticism,” he explains, “was not necessarily the product but the platform.”

Now with CME Group’s announcement, there’s a platform. “This transition to being an exchange-traded product changes everything. Now it becomes a legitimate investment instead of a dark web mystery that lacks physical form.

“An exchange removes the individual counterparty risk and brings all of the fragmented market participants together for price discovery. The key is transparency.”

From Alan’s firsthand perspective, Melamed’s “taming” talk is exactly what bitcoin needs to make the big time. “I’ll trade any market, any direction, anytime as long as I can enter and exit liquid products that enable efficient risk control.

“Trading is about controlling risk and the bitcoin futures contract listing on my home Chicago exchange is another advancement in opportunity.”

[Ed. note: Until bitcoin futures start trading later this year, Alan will stick to his options recommendations — which are working out plenty well for readers of his Weekly Wealth Alert. His most recent recommendation, issued on Monday, turned into a 50% gain by Tuesday. He recommended selling half the position and letting the rest ride for a few more days.

Alan has a new recommendation every Monday, so his trades could make a difference to your retirement in a hurry. Click here for an introduction to his system.]

The major U.S. stock indexes are registering their first meaningful down day since late last month.

At last check the Dow is down 175 points at 23,389. The mainstream is attributing the drop to more worries about tax reform. The Senate is rolling out its version of the bill today, and it would delay the start of the corporate tax cut till 2019.

The housing market’s split… and it has everything to do with the GOP tax plan. “The new Republican tax bill has a specific section that reduces the amount of mortgage interest homeowners can deduct from their pretax income,” Zach says. “In the past, homeowners have been able to deduct mortgage interest payments for loans up to $1 million in value. But the new tax bill will cut the mortgage cap to $500,000.”

Zach expects luxury homebuilders to take a hit from this part of the proposal. Mortgaging a home with a price tag over $500,000 will be less appealing to buyers if tax reform passes.

In the coming months, however, Zach believes this segment of the housing market will experience a bump because mortgages up to $1 million secured before the bill becomes law will be grandfathered into old rules. “I expect to see a rush of demand for luxury homes in the $1 million range between now and the end of the year,” notes Zach. (So run — don’t walk — to settle on that McMansion now.)

Homebuilders that cater to first-time homebuyers, on the other hand, will benefit from the proposal “because customers for these homes will still be able to take advantage of mortgage interest deductions,” says Zach. “Plus, these customers will likely benefit from a stronger job market, lower personal taxes and a growing economy — all benefits from other portions of the new tax bill.

“So the bottom line,” Zach says, “is that the homebuilder rally is still very strong, but you just need to be more selective with which homebuilder stocks you own.”

While congressional Republicans debate how to “pay for” their tax cuts, one possibility turns up in a new study from Brown University.

Researchers have totaled all the military costs Uncle Sam has racked up since Sept. 11, 2001 — not just the Pentagon, but related costs racked up by the State Department, Homeland Security and the Department of Veterans Affairs. Oh, and the interest on the national debt racked up by those costs.

Not mentioned in the report is the fact that on Sept. 11, 2011, the national debt was only slightly higher than that figure — $5.8 trillion. So the “war on terror,” or “Overseas Contingency Operations” or whatever the feds are choosing to call it these days, has cost nearly as much as the entire national debt before the “war” was launched.

Under the “Homeland Security” category, by the way, is that post-9/11 boondoggle known as the Transportation Security Administration — which brings us to our latest 5 business travel alert.

If you have a really long memory, you’ll recall that in mid-2015 word got out that undercover security testers snuck contraband — including simulated weapons and explosives — past the TSA’s systems on 67 out of 70 tries. That’s a failure rate of 95%. Close enough for government work, right?

Whelp, ABC News — which reported the 2015 story — says there was another round of checkpoint tests recently. It couldn’t get its hands on the classified report this time, but the network asked its source if the failure rate was 80% and the reply was, “You are in the ballpark.”

Heh… After the 2015 debacle, the TSA changed its procedures and opened a “training academy.” Great to see all that effort paying off!

“I see you are promoting the Trump tax holiday thing again…I honestly don’t know what to think about this. So many mixed emotions…

“You also stated Nov. 9 it all changes, so hurry. I check your posting and it says now Nov. 20 and you could see returns of 3,436 times whatever you put in. Are you guys trying to drum up subscriptions again or is THIS time the real deal?!

“God, I hope I’m wrong, and I REALLY want you to say I told you so after this is said and done…”

The 5: We’ve been of two minds all year about corporate tax reform.

On the one hand, we’ve been skeptical that any of Trump’s economic agenda will be enacted into law — Obamacare repeal, tax cuts, a giant public works program.

This was a heterodox position for us to stake out last winter. We scoffed in February when Treasury Secretary Steve Mnuchin committed to getting a tax deal done by the end of July. Many Trump true believers raked us over the coals. But here we are in early November and so far our skepticism has been borne out.

On the other hand, as we said again yesterday, there’s bipartisan momentum for corporate tax reform. Obama tried to get it done but couldn’t. Now it’s Trump’s turn. Can he get it done? We don’t know, but the payoff if he does would be enormous.

By the way, the Extreme Alpha team has exercised utmost care in coming up with its recommendations on the back of this corporate tax reform forecast. They’re designed to pay off even if no legislation gets out of Congress. But they’ll pay off bigger if it does. It’s all about risk management…

“Your comments about real reporting being more expensive than two pundits who shout at each other reminded me of a scene from the movie The Birdcage.

“Gene Hackman is a politician watching a group of people yelling at each other on TV. I think it was Meet the Press.

“Anyway, you couldn’t understand what any of them were saying. At commercial, Hackman says something to the effect of ‘That’s 30 minutes of the most intelligent content on TV!’

“As a side note, I think Hackman is one of the most underrated stars there has ever been. His timing in this comedy was just so perfectly deadpan.

“Settles it! I’m going to watch it again tonight!”

The 5: Hmmm… Never saw it. I do remember in the early days of home video recorders watching La Cage aux Folles, the French film The Birdcage was based on. Great stuff — probably need to see it again 30 years later!

P.S. Confidential to readers with Hotmail and MSN email addresses: Yes, we’re still having issues with the links in the emails we send to you if you have a “premium” email account. We’re still working on it with Microsoft. We thank you for your continued patience.