“The year ahead could bring a whole new meaning to ‘Garden State,’” says our penny pot stock guru Ray Blanco. “That’s because the next state to legalize recreational marijuana could be New Jersey.”

As you might’ve heard, there was an election for governor of New Jersey on Tuesday. It was one of the least inspiring races since, well, the Trump-Clinton showdown last year.

The Republicans ran Lt. Gov. Kim Guadagno, a protégé of the scandal-scarred incumbent Chris Christie. The Democrats ran a former Goldman Sachs exec named Phil Murphy — which is appropriate since the last Democratic governor was also a former Goldman suit, Jon Corzine. No wonder turnout was a record-low 35%.

Murphy emerged the victor. “Murphy believes that marijuana should be legal for adults 21 years old or older,” Ray tells us, “and he’s promised to sign a legalization bill into law in the first 100 days of his term.

“That means by April, recreational pot could be legal in New Jersey,” Ray underscores. “Not long ago, that would have been unthinkable.”

Indeed. Christie, the departing governor, is an unreconstructed drug warrior. Earlier this year he called legalization supporters “crazy liberals” who want to “poison our kids.”

“At the end of the day, what we’re really seeing from Murphy here is a play for tax revenue,” Ray tells us.

The word “dire” doesn’t even begin to describe New Jersey’s financial state. Between its cash flow, its long-term debts, its ability to withstand the next recession and its pension obligations… the Mercatus Center ranks New Jersey’s finances dead last among the 50 states.

Thus legalized marijuana is part of a Murphy revenue-raising formula, along with higher taxes on corporations and millionaires. Says Ray: “A recent study showed that legal recreational marijuana could generate $300 million a year for the state’s coffers.

“More importantly, New Jersey could be the prototype for other neighboring states mulling over the possibility of legalizing weed,” Ray goes on.

So far, the eight states that have legalized recreational marijuana have all done so through referendum. New Jersey would be the first to do it through the legislature.

“If states like New York and Pennsylvania see piles of money rolling in without measurable negative side effects (as is the case in other locales that have legalized recreational weed), it’s only a matter of time before they follow suit,” Ray says.

“The tides of popular opinion on pot aren’t just turning. They’ve turned. And as legislation slowly catches up with the trend, you can expect to see some huge opportunities in pot stocks. The companies that already have proven track records in locales where weed is legal are going to have a massive leg up as new states come online.”

In other words, don’t think you’ve missed out on the big money from penny pot stocks. There’s a whole new profit wave coming. It’ll be like turning back the clock to when Colorado broke the mold a few years ago… and gains of 16,700% or better were there for the taking. Ray shows you the way at this link.

By day’s end, the Dow is likely to notch its first down week in eight weeks. The Big Board is adding on to yesterday’s losses — now at 23,421.

Granted, that’s down a not-so-whopping 0.6% from Wednesday’s record close, but as Greg Guenthner pointed out in this morning’s Rude Awakening, these days any kind of pullback feels like a crash.

The biggest economic news from China this week is not the summit between presidents Trump and Xi.

It is instead a warning from Zhou Xiaochuan, governor of China’s central bank. Published on the People’s Bank of China website, the article describes risks to the financial system — including some that are “hidden, complex, sudden, contagious and hazardous.”

The buzz in Beijing is that Zhou is likely to retire soon. Guess he feels free to speak the truth now. Heh…

In any event, Zhou’s warning comes at a pivotal moment, says Jim Rickards: “The first cracks are starting to appear in China’s Great Wall of Debt.

“Chinese corporations have incurred dollar-denominated debts in the hundreds of billions of dollars, most of which are unpayable without subsidies from Beijing.”

Will China’s economy come crashing down because of looming defaults? “China’s debt-to-equity ratio is over 300%, far worse than the U.S.” says Jim… “and our debt in the United States is pretty hard to beat.”

At the risk of repeating ourselves, Jim believes China’s system is a runaway Ponzi scheme: “A lot of corporate lending is simply one company lending to another, which in turns lends to another, giving the outward appearance of every company holding good assets… It’s an accounting game with no real money behind it and no chance of repayment.”

An article at Bloomberg points to Dandong Port Group Co. — based in a city on the North Korean border — as one in a string of Chinese companies that’s defaulted on bond payments. The company “sold 1 billion yuan ($151 million) of five-year bonds in 2014 with an initial coupon rate of 5.86% and an option for investors to sell them back to the company early. All the investors have exercised that option, and the company only paid back a portion of the principal, it said without specifying an amount.”

Jim says it only takes one “snowflake” to bring down an economy already piled on with debt. “When will confidence be lost in such a way that the entire debt house of cards crumbles? When will a geopolitical shock or natural disaster trigger a loss of confidence that ignites a financial panic?” Jim thinks we’re closer to pushing the panic button on China than we’ve been since 2008.

That said, China does have an insurance policy — a policy that once again it’s keeping close to the vest.

If you’re a really longtime reader, you’ll recall how we’ve tracked the People’s Bank of China’s official gold reserves. From 2003–09, the PBOC said that reserve totaled 600 metric tons — no more, no less and no changes.

No one believed it; the only question was when China would revise the figure. On April 24, 2009, the figure was revised to 1,054 metric tons.

The number stood for six more years. On July 17, 2015, it was revised to 1,658 — good enough to overtake Russia as the globe’s fifth-largest gold holder. The PBOC further said it would start providing monthly updates. It had to do so in order for the Chinese yuan to join the “basket” of currencies that are part of the International Monetary Fund’s “special drawing rights” — the IMF’s super-currency used by governments and central banks.

Funny thing, though, the number stopped changing in late 2016 — even as it was still updated every month. As of now, it’s been a full year that the reserve has totaled 1,842.56 metric tons.

As if anyone’s supposed to believe that. We invoke Aretha Franklin with the following chart… 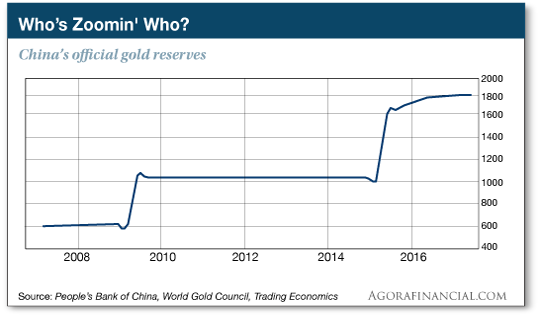 Writes the veteran gold analyst Lawrie Williams, “It seems to be more than coincidental that the nation has reported a zero increase in its gold reserves ever since the yuan became an integral part of the IMF’s special drawing right in October last year and looks to have reverted to its historic pattern of not reporting gold reserve increases while building them up surreptitiously and then only announcing any rises at around five- or six-year intervals — or when it suits the country to do so.”

Yup. As Jim Rickards has long said in this space, China will come clean about its gold holdings at a time of its choosing — likely when the global monetary system seizes up and the global powers that be hit the reset button. China will have a much bigger “seat at the table” in that process with a big gold stash — which at this time is probably at least twice the size of the official figure.

“As the ‘hello old friend’ subscriber iterated yesterday, I want relevant information that I can use to make intelligent decisions now in the cryptocurrencies market, not another drumbeat for another newsletter!”

The 5: To clarify for newer readers: The 5 is a free bonus that comes with whichever paid Agora Financial publication you subscribed to.

Our analysis in The 5 comes free; our specific recommendations are limited to the paid publications.

Among our entry-level newsletters, we have two with regular cryptocurrency coverage — True Alpha and The Altucher Report. As soon as you subscribe, we email you a subscriber-only link to a package of special reports with buy recommendations.

We also have a couple of high-end crypto trading services specializing in higher-risk, higher-reward opportunities. Neither of those services is available to new subscribers at this time, but watch this space for announcements.

“Love The 5!” writes our final correspondent.

“But, with Jim thinking war with North Korea is likely and soon, what likely happens then to real estate prices in that scenario? Especially in the bubbly markets along the coast? Thank you.”

The 5: Gee, that’s not the kind of “but” we usually get with those emails…

Jim’s still in Australia and not in easy reach. But we can imagine a couple of variables at work in that scenario: 1) public perception here at home of whether North Korea is capable of lobbing a nuclear-tipped missile toward the West Coast and 2) public perception in Asia about the risk of investing overseas — i.e., in high-end real estate on both U.S. coasts.

Meanwhile, if you want a read on the likelihood of a preventive U.S. attack on North Korea… keep an eye out for rumblings about an evacuation of U.S. civilians who live there. It’s not an insubstantial number — about 150,000. The U.S. military conducts regular drills for that possibility.

It wouldn’t be easy to keep such an operation under wraps, should it come about. Heck, two months ago there were fake orders for a “noncombatant evacuation operation” that hit the mobile phones and Facebook accounts of U.S. servicemembers and their families. The Army had to issue a clarification saying it was the work of a hoaxer…