Bitcoin Goes Legit (Is This the End?)

The world’s biggest futures exchange, CME Group, set a date this morning for the start of bitcoin futures trading – Monday, Dec. 18. As you might recall, CME Group announced those plans at the end of October; it didn’t take long to get a blessing from the Commodity Futures Trading Commission.

Meanwhile, CME Group’s chief competitor — CBOE Futures Exchange — announced today it’s filed a product certification with the CFTC to offer its own bitcoin futures trading. It too hopes to be underway by the end of the year.

But that’s not the only evidence bitcoin has “arrived,” says Agora Financial contributor James Altucher.

“In an announcement on Wednesday,” he tells us, “two major financial institutions revealed that they intend to launch bitcoin-related products in 2018.

“The separate announcements, made by stock exchange Nasdaq and broker Cantor Fitzgerald, represent the latest batch of Wall Street firms to enter this market. Both Nasdaq and Cantor Fitzgerald will launch bitcoin derivatives products in the first half of 2018.”

If you own cryptocurrency — or if you’ve been thinking about dipping your toe into the market — these developments raise a host of questions.

We haven’t forgotten the words of CME Group’s 85-year-old chairman emeritus Leo Melamed — cited here in The 5 last month: “We will regulate, make bitcoin not wild, nor wilder. We’ll tame it into a regular-type instrument of trade with rules.”

In light of CME Group’s likely role in helping to suppress the gold price… that sounds like a threat.

Then again, widespread adoption by the “establishment” just might be what bitcoin needs to attract a new wave of investment demand, taking it from $10,000 today… to $100,000 later and $1 million beyond that.

That’s what bitcoin traders seem to be betting on: Since CME Group’s announcement this morning, bitcoin has jumped about $400… to $10,545. It’s the capstone on a week’s worth of wild moves… 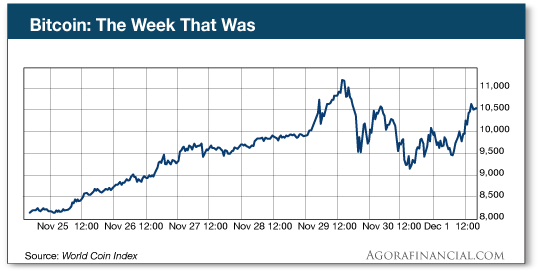 If you were with us yesterday, you know that we’re organizing a LIVE crypto Q-and-A session with James Altucher for this coming Monday evening at 7:00 p.m. EST. Today’s developments make this event even more timely than it already was.

It won’t cost you a thing to attend… and just for showing up, you’ll have a chance to win $1,000. We’ll be giving away $1,000 to a randomly chosen viewer every 60 seconds while the event is in progress. Here’s the link where you can sign up and submit questions.

To the more conventional markets, where the major U.S. stock indexes are swinging up and down with every new burp of information from Washington.

When we left you yesterday, prospects for passage of tax reform in the Senate were looking good with His Maverickness Sen. John McCain agreeing to back the bill. The Dow ended the day up more than 300 points. By nightfall, however, it started to look as if the budget numbers weren’t going to add up in a way that would satisfy the “deficit hawks”… and Dow futures plunged.

Then with the new morn, the numbers were massaged enough that holdout Republicans Ron Johnson of Wisconsin and Steve Daines of Montana agreed to support the bill. The Dow ended up opening flat compared with the previous day’s record close.

Now comes word that former National Security Adviser Michael Flynn has pleaded guilty to lying to the FBI about Russia… and ABC News reports he’s agreed to testify against the president. At peak freakout, the Dow was down 300. As we write now? About 100.

Gold’s action has been a mirror image of the major stock indexes — up big on the Flynn news, pulling back later. At last check the bid is $1,281.

The big economic number of the day is the ISM Manufacturing Index: At 58.2, it’s a little less than expected, but still plenty solid. The U.S. factory sector has been growing for 15 straight months now.

Crude is up nearly 2% this morning at $58.52 a barrel… but Jim Rickards says it won’t go much higher than that.

As we mentioned yesterday, the OPEC nations and Russia have come to terms on extending the current round of production cuts through the end of next year.

But Jim says the official meetings in Vienna matter less than an unofficial understanding between Saudi Arabia and Russia — two of the world’s three biggest oil producers. (The United States is right up there these days.)

“Russia and Saudi Arabia alone produce almost as much oil as the rest of OPEC combined,” says Jim.

That means even if smaller OPEC members cheat on the production caps — which happens a lot — it doesn’t make a big difference to global supply. “Saudi Arabia and Russia maintained their production discipline and have maintained the price of oil in a relatively narrow range of $40–60 per barrel since mid-2016,” he says.

Their mutual objective: Keep prices high enough to generate sufficient revenue for the Saudi Arabian and Russian governments… while keeping them low enough to put a lid on profits for their fiercest competitors — American shale-energy producers.

Even Bloomberg has noticed the emerging relationship: “The Saudi-Russian rapprochement marks a policy change between two unlikely partners. Saudi Arabia is historically a staunch ally of the U.S., Russia’s longtime adversary and the main partner in the discovery and production of the kingdom’s crude. The recent boom in U.S. shale production proved a turning point, with Saudis and Russians recognizing a shared interest in defending against this contributor to a global supply glut and working closely together to reach the cuts accord.”

Jim’s conclusion: “Saudi Arabia and Russia will use active measures including production cuts to keep the price of oil from going higher. The $60 per barrel ceiling is crucial for keeping new frackers on the sidelines and discouraging new production and exploration.”

[Ed. note: Two days ago, Jim urged a small circle of his readers to act on this analysis… and execute a trade with up to 150% profit potential. Once you see the method Jim used to reach his conclusion… well, let’s just say it could blow your mind. Click here and see why he’s had to keep it under wraps for 15 years… until now.]

We don’t understand why everyone supposedly gasped yesterday during a federal trial in New York.

“Reza Zarrab, a gold trader who has pleaded guilty to participating in the scheme, said in testimony in Manhattan federal court that he was told by a senior Turkish government official around 2012 that Mr. Erdoğan had instructed two of Turkey’s largest banks, Ziraat Bank and VakifBank, to begin helping Iran launder its money.”

We were onto this as it was going down five years ago. We wrote about it in the old Apogee Advisory newsletter.

In March 2012, a screaming anomaly appeared in Turkey’s gold trade: Exports to Iran that month totaled $480 million — up from a mere $13 million a year earlier. March 2012 happened to be the month the United States and European sanctions on Iran were tightened… Iran was kicked out of the global payments network called SWIFT.

Turkey needs natural gas from Iran for electricity. If it couldn’t pay with dollars or euros, it would pay with gold instead.

It was obvious at the time. Why all the pearl-clutching now?

Said our fearless leader Addison Wiggin: “The tale of Turkey and Iran is one of how trade flows like water: Block it one way and it will find some other way to get through — legally or otherwise.”

To the mailbag, where a reader wishes to weigh in on Hawaii’s cross-referenced database of gun owners and medical marijuana users.

“I will be watching this to see who takes action first,” he writes — “the NRA or National Association for Gun Rights, NAGR.

“As a former life member of the NRA and current NAGR member I can say I have been much happier with the no-compromise stand the NAGR takes. It is quite clear what ‘shall not be infringed’ means in the Second Amendment.”

Did they speak up in defense of Philando Castile in Minneapolis? If they did they deserve much praise, but if not, they too are a bunch of poseurs — lickspittles for the law enforcement lobby.

“I see that there are two persons at Agora Financial with the given name of ‘James,’” a reader writes — “one being the highly respected Jim Rickards, and the other being the one with the bubble hairdo. This is addressed to the James with the bubble bit (pun intended).

“I read that the IRS informed that only 807 people have declared bitcoin for taxes. Also, I read that this week the IRS won a court order asking Coinbase to provide identification information for users who conducted annual transactions worth more than $20,000 on its platform between 2013 and 2015.

“My question to this James is were you born in time to be old enough to recall when the IRS managed to jail mobsters and gangsters for tax evasion when attempts to jail them otherwise for crimes committed failed?”

The 5: Uhhh… How does that reflect on bitcoin’s validity as an investment vehicle? ‘Cause that’s what we assume you’re driving at.

It’s true, this week a federal court ordered Coinbase to turn over records for 14,355 customers to the IRS — customers who “bought, sold, sent or received” more than $20,000 in their accounts in a single year between 2013–15.

If your implication is that James is one of those starry-eyed idealists who believes bitcoin will subvert the entire edifice of taxation and central banking… well, sorry, that’s not what he’s all about.

But to my mind, that makes him a more credible advocate for bitcoin — and the handful of other cryptos he says are not frauds.

P.S. If you have crypto questions for James — even if they’re snarky ones like the reader above — by all means, submit them for James’ LIVE Q-and-A webcast, direct from James’ home in New York.

It’s scheduled for Monday at 7:00 p.m. EST. And if the prospect of James answering our readers’ most burning crypto questions isn’t enough incentive to be there, we’re giving away $1,000 to a randomly selected viewer every minute while the event is in progress.

It won’t cost you a thing to watch; all we ask is that you sign up in advance at this link so we get a sense of how many people to expect.