What Wall Street Doesn’t “Get” About Bitcoin

Can another round-number record for bitcoin be far away?

It’s at this moment we introduce a dear reader’s objection to bitcoin. He is hardly alone.

“It doesn’t really exist as something tangible you can touch,” he says. “It isn’t backed by anything, and because of that it isn’t safe. You can’t even insure it. You can’t keep an emergency pile of bitcoins in a safe, your pocket, the mattress, etc. Imagine being a bitcoin millionaire in Puerto Rico when the power and all communications went out.

“Bitcoin actually reminds me of the housing crisis, when everyone believed prices could never stop going up, until they did. I wonder does anyone knows what percentage of bitcoin investing is being done with borrowed money from loans they can’t easily afford. Perhaps some numbnuts desperate to get in mortgaged the home. Hmmm, maybe bitcoin will turn out to be that snowflake setting off the financial avalanche you guys always used to talk about.”

We always remain on avalanche watch here at The 5… but all the same we daresay the reader is falling into the same trap as conventional thinkers on — gasp! — Wall Street.

“Only on Wall Street,” says Agora Financial contributor James Altucher, “can a group of folks spend years studying the effects of supply and demand yet still have NO appreciation for why bitcoin is doing what it’s doing.”

As long as the reader brought up the housing market, that’s the example James will use to illustrate the point: “Bill and Sarah are selling their beautiful home in a desirable part of town with a great school district for $150,000. There are no other houses like it on the market. So the supply of equally beautiful homes for sale is low.

“Because so many folks are interested in Bill and Sarah’s house, one after another interested buyer begins offering to pay more than the last guy. Current demand is higher than available supply.

It’s no different with bitcoin.

“Wall Street wants to value bitcoin like Amazon or Nike,” says James. “But it can’t! Because what’s driving bitcoin higher has nothing to do with earnings, cash flows or company fundamentals.

“The price of bitcoin will continue to rise until it reaches a level at which current owners decide it’s in their best interest to sell. Then, and only then, will the supply of bitcoin increase to meet or exceed the number of investors willing to buy (demand) bitcoin.

“And then the price will drop.

“Price will continue to drop until it reaches a level where owners are no longer willing to sell. And then the whole process will begin again.”

But where exactly are we with “the whole process”? How will you know when to exit? What about the launch of bitcoin futures trading two weeks from today?

James will answer reader questions LIVE from his home in New York tonight at 7:00 p.m. EST. There’s still time to submit questions. This webcast is FREE to watch. And while the event is in progress, we’ll be giving away $1,000 every minute to a randomly selected reader.

But you can’t win if you don’t sign up in advance. Here’s where you can do so.

So it was “America’s wrongest reporter” who tanked the Dow 350 points on Friday.

As we mentioned while it was happening, ABC News reported that former national security adviser Michael Flynn had agreed to “fully cooperate” with special counsel Robert Mueller’s Kremlin-gate farce, on the heels of his guilty plea for lying to the FBI.

As it turns out, ABC correspondent Brian Ross’ so-called “bombshell” hinged on the notion that Flynn’s contact with Russian diplomats occurred during the campaign. That was not the case; it occurred after Donald Trump had already been elected. 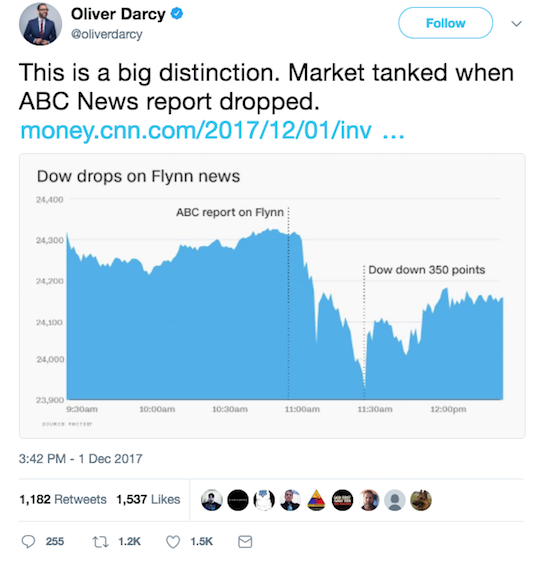 Add it to Ross’ collection of greatest hits: After the 2012 movie theater shooting in Aurora, Colorado, he Googled the name of suspect James Holmes and announced there’s a James Holmes in Aurora who’s a tea party activist. (Oops, wrong James Holmes.) Earlier in the century, he linked the 2001 anthrax attacks to Iraq’s Saddam Hussein. (Even the Bush White House never made that claim.)

Ross has other entries in his hall of shame, too — enough that a few years ago the website Gawker dubbed Ross “America’s wrongest reporter.” Yet Gawker has since been sued out of existence while Ross will do a mere four-week suspension before he resumes drawing his superstar salary. Astounding.

By day’s end Friday, the Dow’s loss was only 40 points once everyone realized the score: There was nothing treacherous about Flynn’s discussions. Instead, Flynn walked into a perjury trap set by Obama administration holdovers, armed with the NSA transcripts of those discussions.

As Robert Parry explains at Consortiumnews, “The Justice Department wasn’t seeking information about what Flynn said to Russian Ambassador Sergey Kislyak – the intelligence agencies already had that information. Instead, Flynn was being quizzed on his precise recollection of the conversations and nailed for lying when his recollections deviated from the transcripts.”

Anyway, that was Friday: Today the Dow is up 300 points, a delayed reaction to passage of the Senate tax reform bill early Saturday morning.

Gee, you’d never guess there’s a looming risk of a “partial government shutdown” after Friday of this week; Congress and the White House still need to come to terms on the budget and the debt ceiling, even if it’s a deal to buy time for a couple more weeks.

And as long as we’re in party-pooping mode, there’s still no guarantee the House and Senate tax bills can be “reconciled” in a way that will secure Senate majority; there was an inordinate amount of horse-trading Friday night just to get to 51 votes.

But assuming tax reform does pass, it will be another nail in the coffin of entrepreneurship.

For years we’ve pointed with concern to the decades-long decline in the number of startups. This matters because Kauffman Foundation research finds that new businesses, less than five years old, are the driver of nearly all net job creation in the United States since 1980. 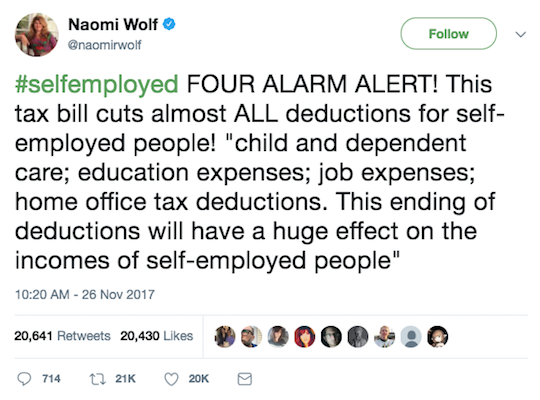 You might recall Ms. Wolf as the feminist author who once advised Al Gore to wear more earth tones. But in the years since the Sept. 11 attacks, she’s become a perceptive and provocative social critic, with books like The End of America: Letter of Warning to a Young Patriot. Props to her for raising the issue.

As we discussed in early 2016, people who want to end their existence as wage slaves and strike out on their own face two enormous obstacles — payroll taxes and the cost of health insurance.

At least there’s been the saving grace of a tax code that carved out lots of deductions benefiting the self-employed. But almost all of those deductions go away under both the House and Senate versions of the tax bill.

Sure, you can file the paperwork to become a limited-liability corporation or similar arrangement to take advantage of filing a Schedule C. But that’s both costly and time-consuming. According to the Tax Foundation, Schedule C costs America’s mom and pop enterprises 72 million hours of compliance time and nearly $2.7 billion a year in lost productivity.

Put that together with the existing burdens of payroll taxes and health insurance… and even more would-be entrepreneurs are likely to decide, “The hell with it”… and stay lashed to their soulless dead-end jobs with corporate behemoths.

Crude is down about 1% at $57.79 — traders unconcerned about the latest “tension in the Middle East.”

Hmmm… How to tell the story as succinctly as possible? For decades, Yemen was ruled by a guy named Saleh, a reliable American puppet. Then Yemen was caught up in the “Arab Spring” of 2011 and Saleh was chased from power. To ensure a new American puppet would take over, Secretary of State Hillary Clinton engineered an election with only one candidate — a guy named Hadi.

Hadi was chased from power in 2015 by ethnic Houthi rebels working in conjunction with the old dictator Saleh — who still commanded the loyalty of many troops. Hadi’s ouster alarmed the royal family next door in Saudi Arabia, so they launched a war. Saudi Arabian jets got critical help with targeting and refueling from the United States, and the result is a starvation/disease catastrophe that only recently started getting global headlines.

Late last week, Saleh began turning on his allies, the Houthis. He was making nice with Saudi Arabia — giving the Saudi princes an out for what had become a no-win war.

This morning, someone blew up Saleh’s house, with Saleh inside. Now he’s dead. As the excellent Moon of Alabama blog sums up, “It will need another breakthrough event for the war to stop.”

To the mailbag: “I have always read The 5, as it seemed to encapsulate the current news/views. But yesterday morning you sent two emails, only a couple of hours apart. Why?

And they were both different! And the second was primarily an ad for one of your editors!

“Are you now starting to send out spam? One can only assume. With one email I assumed you gathered the important views to express. Now with two, who knows? I’m starting to feel this is just another ‘slosh’ of wording to fill space… to delete! Keep The 5 for expressed news! Not filler!!”

The 5: Just how long have you been reading us? We didn’t do anything yesterday that we don’t usually do on Sundays.

It’s those promotional emails for Agora Financial’s newsletters and trading services that pay the bills around here and make it possible to bring you “the current news/views.” If you truly object to the promotions, it’s not hard to tell them apart from our daily issues just from a one-second glance at the visual layout.

“Your bitcoin event with James Altucher is scheduled for tonight at 7:00 p.m. EST?” a reader wishes to correct us.

The 5: Huh? What? No, it’s Eastern Standard Time, EST. That’s a common designation, and an important distinction for folks in, say, most of Arizona — which does not observe daylight saving time. This time of year, they need to subtract two hours. If it were summertime, they’d have to subtract three hours from Eastern Daylight Time, EDT.

Come to think of it, we haven’t had a good daylight time rant for a couple of years. In the spring of last year, we cheered an effort to take California off daylight time. That effort failed, but we understand it will come up again in the legislature next year; if approved by a two-thirds majority in the state Senate, a referendum will go on the 2018 statewide ballot.