The Return of the Blockchain Blockheads

We begin with a two-word announcement: It’s on. 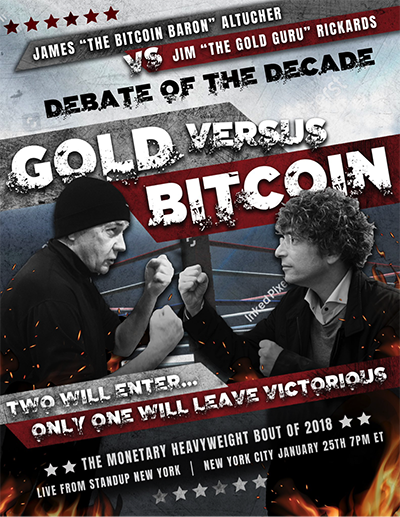 You asked, we deliver. “I’d love to see a lively discussion between Jim Rickards and James Altucher about bitcoin,” a reader wrote us a month ago today. “Jim vs. James!” enthused another reader.

The bare-knuckles confrontation — well, that’s what’s in the picture anyway — is set for Thursday, Jan. 25. That’s less than three weeks from now.

The Agora Financial team is still working out the logistics. Some readers might have access to a live stream as a bonus for having bought one of our high-end services; others would have access to a replay later. Watch this space for further announcements.

Now onto our main topic, which is crypto related…

“There seems to be an unwritten rule on Wall Street: If you don’t understand it, then put your life savings into it.”

So wrote fund legend Peter Lynch in his 1989 book One Up on Wall Street.

Last October we told you how a 20-year-old company in Great Britain changed its name from “On-line Plc” to “On-line Blockchain Plc.” The addition of that one word quadrupled the share price in a matter of hours.

When it comes to blockchain technology, Lynch’s quip comes to mind for the aforementioned James Altucher. “Investors,” says James, “have a habit of jumping into whatever appears ‘hot’ without understanding what the heck they’re doing.”

Which brings us to the case of LongFin Corp. (LFIN) — a firm that began trading back on Dec. 13.

In its IPO filing, LongFin laid out its corporate vision: “To create a global financial intermediation company combined by law of large numbers, machine learning and artificial intelligence.”

When James read it, “I figured they were trying to squeeze in as many technology-related catchphrases as possible.”

Earlier in 2017, LongFin filed an S-1 document with the SEC. This is what companies do when they want to go public. After wading through a bog of Silicon Valley buzz-speak, James did a double-take when he read this passage:

“Liquidity and Capital Resources: For LongFin, as of Feb. 28, 2017, we had cash of $75 and a working capital surplus of approximately $5,000, as the company is newly incorporated and does not have an operating history.”

“Even my daughter has more than $75 locked away in her blue plastic piggy bank!” says James.

“Ziddu,” says James, “bills itself as a blockchain-empowered solutions provider that ‘offers a variety of sources, including microfinance lending against collateralized warehouse receipts in the shape of ziddu coins.’ That’s interesting, I suppose, in a confusing sort of way.

“I won’t hoist the details on you. But I will tell you the transaction is anything BUT clean in appearance.”

Here’s a chart of LongFin covering its 23-day existence as a public company up through this morning. It began trading at $5 on Dec. 13. The spike over $140 was the Ziddu announcement on Dec. 18. Trading was halted at $126. When it resumed less than an hour later, shares were already 50% lower. Today, LFIN has sunk below $55. No, that doesn’t make it a bargain.

James’ takeaway: “As exciting as it can be to invest in the latest and most significant technologies, it’s important to look behind the curtain now and again. Including the words artificial intelligence, machine learning and blockchain in a company’s description does not mean that company’s stock is worthy of your investment dollars.”

Besides, when it comes to blockchain technology, James knows that hands-down. And he recently spotted a line of computer code that stunned him. It signaled an imminent leap in the price of an up-and-coming cryptocurrency.

How did he know? Because he’s seen it happen before. James delivers the proof when you click here.

The major U.S. stock indexes are reaching further into record territory as the first trading week of 2018 winds down.

It being the first Friday of the month, the feds have regaled us with the jobs numbers. The wonks at the Bureau of Labor Statistics conjured 148,000 new jobs for December. That’s way below the “expert consensus” among dozens of economists polled by Bloomberg. Indeed it’s barely enough to keep up with population growth. But it’s also a one-month outlier in the big scheme.

Aside from the issue of limited federal resources we addressed in yesterday’s 5, Sessions has also incurred the wrath of Republican governors in Massachusetts and Nevada — states where recreational marijuana became legal in the last year.

On Capitol Hill, Republican Sen. Cory Gardner of Colorado — one of the first states to legalize recreational weed — says Sessions went back on his word during his confirmation hearings. And Gardner’s in a position to do more than just complain about it… 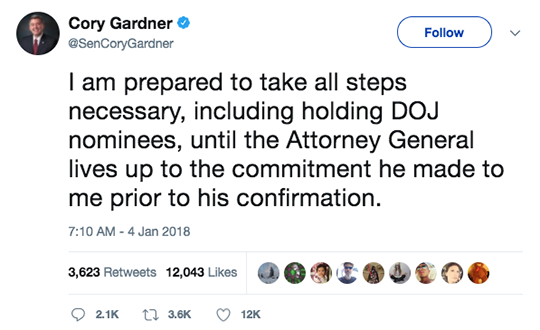 Sen. Gardner isn’t up for reelection until 2020. Your serve, Mr. Sessions.

While the share prices of some penny pot stocks have taken a hit this week, our own Ray Blanco remains long-term bullish: “Make no mistake, no number of memos is going to change the momentum behind the legal pot industry.

“Voters overwhelmingly support legalizing marijuana in the U.S. The industry already employs thousands of people and throws off billions of dollars in tax revenues. You can’t unring that bell.” (If you’re feeling bold and want to “buy the dip” with one of Ray’s favorite names, check this out.)

[Your editor pauses to check if there’s a security patch in Apple’s App Store. Nothing yet.]

… but rather a stunning story from India.

“In 2010,” says an article at BuzzFeed, “India started scanning personal details like names, addresses, dates of birth, mobile numbers and more, along with all 10 fingerprints and iris scans of its 1.3 billion citizens, into a centralized government database called Aadhaar to create a voluntary identity system.

“On Wednesday this database was reportedly breached.”

An Indian newspaper, The Tribune, says its reporters paid all of $8 to hackers to get a username and password allowing access to the database. “Lo and behold,” writes Tribune reporter Rachna Khaira, “you could enter any Aadhaar number in the portal, and instantly get all particulars that an individual may have submitted.”

The system is indeed “voluntary.” But without an Aadhaar number, it became nearly impossible during 2017 for Indians to get a bank account or a mobile phone or health insurance.

If your memory is kicking in and saying, “Hey, weren’t you talking about a big cash ban in India awhile back?” you’re right.

In November 2016, India’s government declared a ban on the country’s most commonly used bank notes — about 85% of the cash in circulation. Indians were required to bring their cash to a bank, where it could be deposited in a digital account or converted to other denominations.

Hundreds of millions of people who heretofore transacted only in cash were being dragged kicking and screaming into the electronic age — where transactions are more easily tracked and taxed. Prime Minister Narendra Modi was upfront about the agenda: “A 100% cashless society is not possible [now]. But why don’t we make a beginning for a less-cash society in India? We can gradually move from a less-cash society to a cashless society.”

BuzzFeed’s story didn’t link the Aadhaar database to the “less-cash society.” But you can see the two programs go hand in hand. The Gates Foundation was one of the driving forces behind the cash ban, according to documents uncovered last year by the German journalist Norbert Haering. Bill Gates has marveled at the Aadhaar program, calling it “something that had never been done by any government before, not even in a rich country.”

And now anyone can buy Aadhaar’s data for roughly the cost of three Happy Meals. (Modi’s government has condemned the story as “fake news.” Of course.)

India truly is, as we said a year ago, home to an enormous experiment on 1.3 billion human guinea pigs. We’ll keep you posted on the mad scientists’ progress…

“Knuckman is wrong!” a reader writes after yesterday’s 5.

“Alan Knuckman is missing something very simple in his 2018 forecast. Get this — oil up equals U.S. economy going into recession. Fear high oil.”

The 5: You raise a good point — one we brought up ourselves in late November. Every recession in the last couple of generations has been preceded by a ramp-up in oil prices. But it’s going to take a significant climb toward $75 — that is, a tripling from the February 2016 low — to tip us into recession.

And now for some meta-mail — reader correspondence about this e-letter.

“Around the middle of December,” a reader writes, “the term ‘5 Min. Forecast’ was no longer noted in the subject line of the emails.

“I get many emails from Agora. I have no idea what is in the email so I delete many of them..I really enjoy reading The 5 Min. Forecast but do not have the time to open several emails to see which email is The 5.

“You’re only hurting your own publication by not identifying ‘5 Min. Forecast’ in the subject line. I have now spent at least 45 minutes with your customer service people on this silly issue that ought to be able to be easily rectified.”

The 5: Uhhh… It now says “5 Min. Forecast” in the “From” line. Unless you’re using a 1995-vintage email program that only shows the actual address the issues are mailed from, we’re hard-pressed to understand how you could miss it.

Now, it’s true that under this new arrangement our sales-driven emails also have “5 Min. Forecast” in the “From” line. But if you’re bound and determined to seek out only your daily issues (and we’re flattered that’s the case), just check when it hit your inbox: If I’m on a roll and write quickly, it’ll come as early as 2:00 p.m. Eastern. If my muse eludes me (like today), it might be closer to 3:30 or even 4:00.

If there’s a sudden uprising among the readership, we’re willing to reconsider this shift… but we made it at the beginning of December and now’s the first time anyone’s brought it up.

P.S. Moments after we hit “send” yesterday, Alan Knuckman urged his Weekly Wealth Alert readers to take 103% gains on the those Alibaba call options we mentioned. Total holding time? A little over 48 hours. (And that’s after he recommended selling the first half of the position for 52% gains in only four hours.)

Don’t feel bad if you missed out — there’s a new trade every Monday.