“First of all, you can’t trust any of these companies,” says Timothy Sykes — laying out a key facet of all the companies whose shares he buys.

You read that right. He wouldn’t trust the CEO as far as he could throw him. Not that he’d bother meeting the CEO, or reviewing sales or profits, or any of that other Warren Buffett-y type stuff. There’s not enough time for that when millions are up for grabs — and he’s grabbed plenty of millions over the span of nearly 20 years. (He’s still in his mid-30s.)

Tim Sykes invests in penny stocks. He’s done exceedingly well at it. Today we introduce him as the newest contributor at Agora Financial. He’s the third luminary in our stable who rates his own Wikipedia profile, alongside Jim Rickards and James Altucher.

At the risk of severe understatement, Tim does not fit the profile of the typical newsletter “guru.”

The typical newsletter editor spent some time on Wall Street — maybe a little, maybe a lot. He becomes disillusioned with the culture — always answering to someone, whether it’s clients or advertisers or the board of directors. When he’s not looking over his own back, he’s kissing someone else’s backside. If he thinks the stock or other security his firm is flogging is junk, he has to hold his tongue.

Then he discovers the newsletter biz — where he’s beholden to no one and can speak his mind. He can live where he likes — the beach, the mountains, the small town where he grew up. Subscription revenue (from people like you) is our industry’s bread and butter, so as long as he speaks his truth and his truth resonates with his subscriber base, he’s golden.

As for Tim, he skipped the whole working-on-Wall-Street part. And why not?

As you might recall, that wasn’t uncommon in 1999 — the dot-com bubble was approaching its zenith. It also wasn’t uncommon for many people to get wiped out. From its peak in March 2000, the Nasdaq collapsed 78% by September 2002.

That was not Tim’s experience. By the time he completed his bachelor’s at Tulane — not that he spent much time in class: He was too busy managing his money and even launching a hedge fund — he transformed that $12,415 grubstake into $2 million.

Fast-forward to the present and he’s generated more than $4.7 million in trading profits. Along the way, he’s shown more than 5,000 students how to apply his methods. More than 50 of them are currently pulling down six figures a year. Two have become millionaires. Meanwhile, he lives — umm — comfortably in south Florida, where he’ll sometimes offer a glimpse into his lifestyle on YouTube and Instagram… 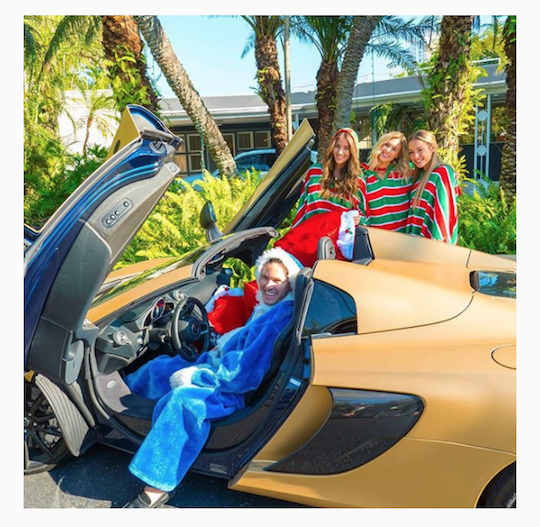 So… about penny stocks and Tim’s dictum that you “can’t trust any of these companies.

“I mean, you’re dealing with developmental companies,” he explains. “They’re very desperate. They have their whole lives on the line. So they’re not going to tell you the whole truth — they have to promote themselves first. Understand that every company has an angle.”

What’s more, there’s a high failure rate with penny stocks. “Over time, the majority of penny stocks drop in price and they mostly fail. Small companies fail in mass — something like seven out of 10 startups fail within their first six months to a year.

“Because of that, prices move quickly. When you have companies popping up and dropping out of the market, stocks can rise exponentially or plummet within days. You can make money by learning to ride this volatility. These are waves.”

Tim is about to take his message far and wide, beyond the 5,000 students he’s already taught. We’ll share some more of his insights with you over the coming days… but right now you should know he’s hosting an online event we’re calling America’s First Penny Stock Summit. Tim will show you how to make as much as $20,072 from penny stocks — week after week.

The event is set for Wednesday, Jan. 24, one week from today. Participation is absolutely free. But if you want in, you need to claim your spot while they’re still available. Here’s where you can do so.

When we left you yesterday, the Dow was already in retreat from a huge morning run-up past that level. The index gave up 283 points by day’s end to close slightly in the red.

No, there wasn’t any obvious news to set off the sharp reversal, no alarming new development on the prospect of a “partial government shutdown” come Friday night. Nor is there any obvious news behind today’s run-up: As we write, the Big Board rests at 26,030.

The big number of the day is industrial production — up 0.9% in December, more than even the most optimistic guess among dozens of economists polled by Bloomberg. The manufacturing component of the number was a disappointment, but utilities and mining (the latter category includes oil and gas drilling) made up for it.

More intriguing, perhaps, is the capacity utilization figure. 77.9% of the nation’s industrial capacity was in use during December — the highest in nearly three years. 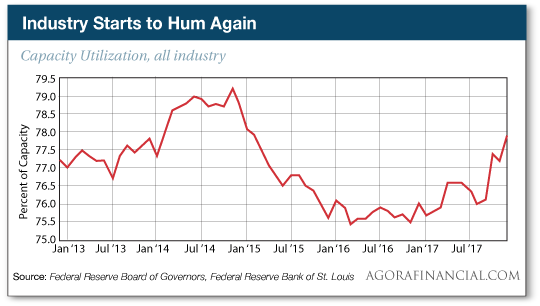 The proverbial “weak hands” are still getting shaken out on talk of stiffer cryptocurrency regulation in South Korea, home to 20% of global crypto trading.

To our cryptocurrency millionaire James Altucher, it’s a colossal overreaction — and misunderstanding.

“Let’s be clear: Cryptocurrencies WILL BE REGULATED by every single government,” James wrote yesterday as the sell-off was underway.

“I believe this is a short-term trend as regulators attempt to take some of the air out of these inflated markets. It’s a matter of each government trying to understand this tectonic shift in the economy,” James says, “and how it will affect their ability to raise taxes, manage monetary policy [and] deal with the negative implications of the privacy inherent in cryptos.”

Not to put too fine a point on it, James says, “This is a GOOD THING.”

More regulation — ideally — means more protection for Main Street investors who’ve been benched on the crypto sidelines. “That’s why the beginnings of regulation will always seem scary to the speculators,” says James. “But those who are serious about accumulating substantial wealth in the long run will welcome all attempts governments make at trying to understand cryptos.

“The fundamental value of digital currency still remains. Over the long term, I believe these assets still have a tremendous amount of unrealized potential.”

[Ed. note: Moments ago, James appeared on CNBC’s Squawk Alley, doing a little “hand-holding” in light of the latest dip in bitcoin. When asked (sarcastically) if he’s still buying bitcoin, he said, “I buy on the way down AND buy on the way up.” He recommends investors do the same.]

We’ve been following Dagong’s moves ever since its launch in 2010. Unlike America’s “Big 3” rating agencies — S&P, Moody’s and Fitch — Dagong came out of the gate refusing to rate Uncle Sam a AAA credit risk. (S&P did downgrade the U.S. government one notch from AAA in 2011.)

Dagong has steadily downgraded D.C. ever since. The latest slide is from A- to BBB+. With a negative outlook, to boot. “Massive tax cuts directly reduce the federal government’s sources of debt repayment, therefore further weakens the base of government’s debt repayment,” says Dagong’s statement.

The downgrade comes a few days after rumors emerged from Beijing that the Chinese government might cut back or even halt its purchases of U.S. Treasuries. But as Jim Rickards pointed out here yesterday, such a move is unlikely to blow up the Treasury market. It does, however, portend a nasty U.S.-China trade war.

The fifth-largest diamond in history has been mined in the kingdom of Lesotho in southern Africa.

“Gem Diamonds Ltd. found the 910-carat stone, about the size of two golf balls, at its Letseng mine,” says Bloomberg. “It’s a D color Type IIa diamond, which means it has very few or no nitrogen atoms and is one of the most expensive stones… 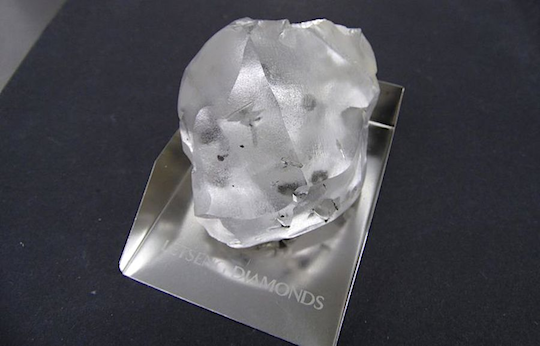 “Gem did not say how it will sell the diamond or what it could be worth. Its value will be determined by the size and quality of the polished stones that can be cut from it,” Bloomberg reports. “Lucara Diamond Corp. sold a 1,109-carat diamond for $53 million last year, but got a record $63 million for a smaller 813-carat stone it found at the same time in 2015.”

“The pricing of diamonds is hugely variable and driven by a multitude of factors,” said Liberum Capital Markets analyst Ben Davis. “But assuming that there are no large inclusions running through the diamond, we initially estimate a sale of $40 million.”

“Congratulations on becoming the first official voice to refer to Vermont as a low-tax state,” a reader writes snarkily. “News to Vermonters!”

The interesting thing, pointed out to me yesterday by 5 associate editor Emily Clancy, is that several of the states up there with Vermont are in the vanguard of marijuana legalization. Oregon is No. 2, Nevada is No. 4 and Washington No. 6.

Even high-tax California is in the middle of the pack at No. 27 — which runs counter to the narrative that everyone’s fleeing the Golden State for Arizona and Texas.

“Let me just preface this with: I like James Altucher,” writes our next correspondent. “I’m a subscriber of his. So this is in no way a knock against him personally.

“But (and Pee Wee Herman had it right: Everybody does have a big ‘but’) alcohol, drugs and digital piracy never threatened the basic underpinnings of the state like cryptocurrency. That argument plainly doesn’t work.

“I’m with Rickards on this one. Alternative currency is too big a threat to world governments. There will be regulation, and you can bet your bottom bitcoin that the regulations will favor the government, not the cryptocurrency groupies.”

The 5: See above for James’ thoughts about regulation.

Last, someone seeks to weigh in on the beaten-to-death-but-never-dies-completely topic of this e-letter’s length: “It would still be five minutes except for the comments to the editor. Maybe even four?”

P.S. Some of Zach Scheidt’s premium subscribers pocketed $300 this morning — with almost no effort.

How easy is it? Judge for yourself at this link.