The 148 Stocks That Could Make Your Retirement

The answer to that question’s subjective… but most Americans have a figure in mind. The problem is Americans are saving less for a rainy day — much less retirement — and haven’t recovered from the Great Recession.

“Most families have little to no retirement savings at all,” says our Greg Guenthner. “Families in their 30s have next to nothing saved for their retirement while those approaching retirement age have a median of just $17,000 tucked away for their twilight years.

“The savings landscape has changed dramatically over the past 40 years,” Greg says. For better… and worse.

“The increasing popularity of 401(k) plans helped many families grow their savings as traditional pension plans started to disappear in the 1980s.”

For almost 30 years, retirement wealth increased substantially, but between the dot-com bust of 2000–2002 and the Great Recession of 2007–09… retirement savings toppled like a house of cards. While the market’s risen from the ashes of a decade ago, retirement accounts have been slower to rebound.

“There’s plenty of blame to go around for these investing failures,” Greg says. “Poorly run hedge funds fail to hit their benchmarks year after year (while still charging high management fees). Wall Street’s lightning-fast algorithmic trading programs skim billions that are completely out of reach of 99.9% of investors.

“That’s where the Seven-Figure Formula comes in….”

Many financial analysts believe small-cap investing is where it’s at. Let’s face it, you’re not going to make exponential returns on blue chip companies. Slow and steady growth? Sure… but not gains that will really move the needle on retirement savings.

Thing is not all small-cap stocks are created equal. “Simply buying a basket of random small-cap stocks won’t even beat the returns offered by the big boys listed on the S&P 500,” Greg says.

What’s more, “Not every startup small cap becomes the next Microsoft or Amazon.

“However, select individual small-cap stocks have proven they can lock horns with their large-cap counterparts and deliver investors superior returns,” Greg continues.

How do Greg and Jonas separate the wheat from the chaff? “Applying… quality filters can help filter out the big losers that drag down the sector’s returns.”

For example, Greg asked: “How many small, publicly traded stocks have doubled or more in the past year?

“These 148 companies have something special going on. There are good, concrete reasons,” Greg says, “why these small stocks have managed to hand their shareholders triple-digit returns — or better — in the past year. But those reasons aren’t always obvious.”

That’s where Archimedes comes in. (No… not the Greek mathematician.)

“Archimedes is the name of our proprietary quantitative platform,” says Greg.

Archimedes is Jonas’ brainchild… And it plows through data like nobody’s business. “If we can conceive an idea and get the data for it, we can use Archimedes to test, refine and trade it with remarkable accuracy.

“That means we can explore countless unconventional avenues for profitable investing,” says Greg. “There are no artificial constraints on our research.”

So what’s it to you? “No matter how much you think you need to have saved before you can enjoy a life of leisure,” says Greg, “we’ve got you covered with scientifically selected small-cap stocks.

“It’s time to take control and ‘add a comma’ to your retirement account.”

It’s a new month. No better time to get started on your own seven-figure formula. (How does $2,316,600 sound?) Greg shows you the way at this link.

On to the markets… The Dow continues its climb back from Monday and Tuesday’s smackdown. At last check, the Big Board is up half a percent at 26,275.

The ISM manufacturing index for January shows a minimal pullback: from 59.3% in December to 59.1% in January. Blame the dip on a slowdown in employment. “Good help is hard to find.”

Facebook’s earnings for the fourth quarter were… interesting. The report caused shares of the stock to whipsaw — at first, down a sharp 4% and then popping back up by 3%.

While Facebook hauled in $4.26 billion in profit, it was down from third-quarter earnings of $4.7 billion. Like many other companies, FB faced a hefty one-time tax bill as the new tax law kicked in. 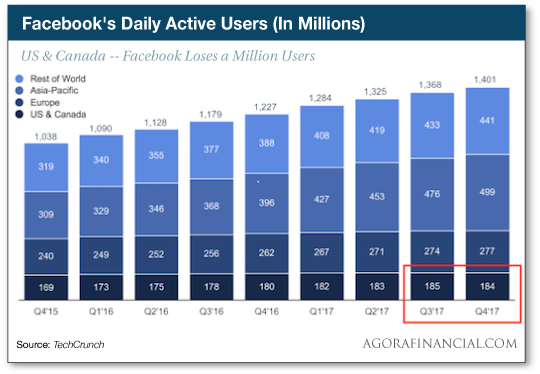 One concern for shareholders is the slowing number of Facebook daily users. An article at TechCrunch says, “Facebook now has 1.4 billion daily users, up 2.18% compared with growing 3.8% to 1.37 billion users in Q3. That’s a sizeable slowdown, and the lowest quarter-over-quarter percentage daily user growth ever reported by the company.”

The most alarming drop-off in daily users is in the U.S./Canadian market that has an average revenue per user of $26.76. The world average? Only $6.18 per user. With 1 million American and Canadian Facebook dropouts in the fourth quarter of 2017, we start to see why shares tumbled so suddenly.

Apropos of Facebook, our income specialist Zach Scheidt weighs in on FANG stocks… and you might be surprised at what he has to say.

When it comes to investing in FANG stocks, Zach Scheidt — editor of Agora Financial’s Lifetime Income Report — says he gets questions like these all the time: “When are we going to invest in Facebook?!” or “Why not just invest in Amazon?”

Zach addresses these questions head on: “The bottom line is we have not taken a single position in these highflying tech companies.”

Why? “That’s because according to our three pillars of investing, the FANG stocks fail on every metric.”

“If a company doesn’t pay a dividend (which FANG companies don’t!),” Zach says, “it automatically breaks the three pillars for a variety of reasons.

“Dividends are a portion of a company’s earnings paid out to investors. And if a company doesn’t pay out a yield, clearly, it cannot grow your income. That fact alone takes care of pillars two and three.”

What of protecting your capital?

“But with FANG stocks and other nondividend-paying companies,” Zach says, “if investors get spooked, there is no benefit to sticking around. Investors will run and the price will plummet.”

Then “how do we play the…tech hot streak if we aren’t investing in FANG companies?” Zach asks.

You might be surprised to learn, “Despite the strong performance by the well-known group of four tech stocks, none was able to crack the 10 best performing tech stocks,” according to an article at Fortune.

But there’s one tech stock Zach’s enthusiastically recommended… and added to the Lifetime Income portfolio; in fact, it turns FANG into FAANG. Of course — the largest company in the world — Apple.

It fits Zach’s three pillars model to a T… including a healthy dividend.

“The company paid a total of $12.6 billion and $12 billion in dividends during 2017 and 2016, respectively, and expects to pay quarterly dividends of 63 cents per common share each quarter,” reports an article at Fox Business.

“Over the past three years,” Zach says, “Apple has returned 57%… and Apple has the market craving more with their updates and new releases.”

[Ed. note: If you like Zach’s way of thinking and you don’t yet have Zach Scheidt’s Big Book of Income, what are you waiting for? We’ll send you a free copy — just spot us $4.95 for shipping — and you’ll get a trial subscription to Lifetime Income Report.]

Happy New Year: In January, the U.S. Secret Service sent a memo to banks warning “jackpotting” ATM hacks are on the rise in the United States.

This particular method of stealing from ATMs targets “stand-alone ATMs… located in pharmacies, big-box retailers and drive-thru ATMs,” according to the memo. While jackpotting is prevalent in Europe, Asia and Mexico, it’s new to the U.S.

What’s jackpotting? An article at The Verge explains: “Thieves use a variety of tools to hack into ATMs and cause them to dispense large amounts of cash on demand.” Thus the “jackpot”…

“Posing as ATM technicians and, using a medical endoscope, [thieves] locate an area within the machine where they can attach their own computers. 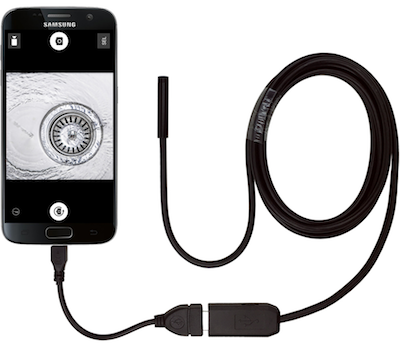 A medical endoscope. Hacker to ATM: “You won’t feel a thing.”
Source: gadgetsforgeeks.com.au

“The original hard disk of the ATM is removed and replaced with a disk that mirrors the ATM’s own software,” The Verge explains. “At that point, the ATM appears out of service to regular customers, while fraudsters can remotely control it and force it to spit out cash, using ‘money mules’ to actually collect the cash.”

The Secret Service mentioned the most vulnerable ATMs are made by Diebold Nixdorf and run Windows XP; they recommend updating to Windows 7.

So if the screen on an ATM is out of service and a pasty guy in coveralls hovers nearby… that’s your cue. As you beat feet, you might want to call the bank that operates the ATM. Tell ‘em Microsoft stopped supporting Windows XP nearly four years ago.

“It’s disturbing that President Trump didn’t mention the federal budget deficit during his State of the Union address Tuesday evening,” writes one of our regulars. “It’s only the 20 trillion-ton elephant in the room.

“Meanwhile, in a letter to House Speaker Paul Ryan, Treasury Secretary Steve Mnuchin urged Congress to raise the federal debt ceiling as soon as possible. Earlier in the day, he also told the Senate that he’s ‘open to bipartisan solutions to figure out something as an alternative.’

“Translation: We’re just getting warmed up. Let’s eliminate that pesky limit on our credit card and really run up the tab.

“This can’t possibly end well — especially after Mnuchin’s nonsense in Davos last week about a weaker dollar being good for America. If the foreclosure king and his boss (and our congressional leaders) don’t turn back from this path, they’ll soon be overseeing the biggest default of their careers.

“The Kevin Williamson quote was priceless!”

The 5: Meanwhile, the debt ceiling clamped back down on Uncle Sam on Dec. 8. The Treasury has been resorting to “extraordinary measures” — borrowing from federal pension funds and the like — to stay under the limit since then.

In 2017, the government had a budget deficit of $666 billion — ominous-sounding number — the largest deficit since 2013. Which calls into question the reason for new tax laws: Where did the wonks in D.C. think revenue would come from? While tax cuts might’ve given Americans some room to breathe, they’re putting the screws to federal coffers.

Yesterday the Congressional Budget Office warned that because of the tax cuts, tax receipts are likely to come in $10–15 billion a month lower than before. Which means the government will be staring down a default in, oh, about six more weeks. Good times…

P.S. Did we mention that since launch of The Seven-Figure Formula last fall, that Greg Guenthner and Jonas Elmerraji have already recommended readers collect a 112% gain — in just a little over 10 weeks?

Why not get started on your own seven-figure formula today? Get some real financial traction… Greg shows you how right here.