Make Volatility Work For You

The correction has been averted. For now.

By day’s end yesterday the Dow was up 550 points, wiping out a little less than half of Monday’s losses. This morning, the Big Board slipped 100 points on the open but at last check was up 250 on the day.

For the time being, the mainstream has given up on explaining each big swing. CNBC is contenting itself with “Wild Ride on Wall Street Continues.”

CNBC has a short memory. As “wild rides” go, this is nothing.

The VIX — which measures the “implied volatility” in the market via S&P 500 index options — peaked yesterday morning near 46 — around the same time the Dow bottomed. But it was back down to 30 by the close and as we write is around 22. 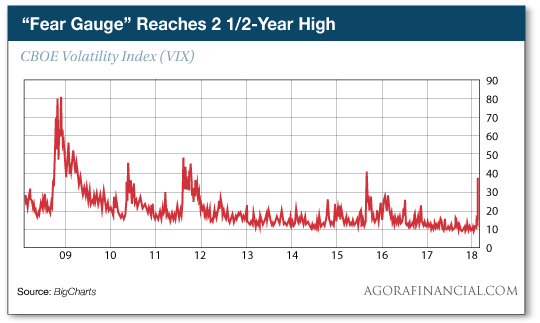 In the 25-year history of the VIX, a key level has proven to be 45. There have been only six episodes when the VIX closed higher than 45:

Key point: In all but one of these episodes, you could have bought the Dow 30 stocks as soon as the VIX topped 45… held those shares for a year… and watched the index zoom up 1,500–2,500 points.

Careful about piling in, though: The one exception was a humdinger. 2008 was a massive “head fake.” A year later, the Dow was 600 points lower.

During the last of these episodes — the August 2011 debt-downgrade drama — we recounted these facts and then invoked Clint Eastwood: “Do I feel lucky?”

You don’t have to answer that question to still make money while Wall Street goes on a “wild ride.”

“While this volatility may not sound like a good thing on the surface,” says our income maven Zach Scheidt, “it actually creates a special window of opportunity for my favorite income strategy.

If you’re tuning out at the sight of the term “options,” we urge you to hear us out. “It may sound complicated,” says Zach, “but these are simply financial contracts that trade on special exchanges just like stocks. If you know how to use options correctly, you can make a lot of money in a very reliable way.

“I call this method my ‘perpetual income strategy’ or ‘instant income’ because you can continually collect instant income payments from the market.”

“While you can use this strategy to generate instant cash literally any time the market is open, the amount of cash that you can get increases during market environments like this,” Zach goes on.

Let’s rewind to August 2015, the last big spike on that chart. As we said yesterday, what’s happening now has a lot of parallels to then — starting with the fact the market was way overdue for a pullback.

In the month after that big spike, readers applying Zach’s instant-income strategy could collect payouts of…

That’s a total of $3,855 in instant payouts over the space of one month when the market went on a “wild ride.”

So how does the strategy work, exactly? Let’s pull back the curtain a bit…

Essentially, you’re collecting income from the speculative bets made by aggressive traders.

“When these traders place bets on how far a particular stock could move,” Zach explained back in 2015, “they’re required to place a ‘deposit’ to secure their bets. Our strategy collects these ‘deposits’ in the form of instant cash payments in our accounts. That’s right, instant.

“The best part is when market volatility increases, these speculative traders are required to put down even higher deposits. So in volatile market environments, our instant income payments actually increase in value.”

You can see that with Zach’s recommendations so far this year. Payouts between $250–450 as the market zoomed higher in January suddenly ballooned to around $600 as volatility crept into the market toward the end of last month.

Even in an “ordinary” month, Zach aims to deliver a bare minimum of $2,000 in extra income. Our publisher is so impressed with the results, he’s backing this minimum target with a guarantee.

If the market’s making you jittery right now, you owe it to yourself to explore this unique strategy. We have a video that walks you through the process. You won’t believe how easy it can be. Check it out right here. Please note: We can’t promise how long we’ll be allowed to keep this video online.

A jump in stocks today — and a jump in the dollar all week — adds up to bad news for other asset classes.

The dollar index is back above 90 for the first time in two weeks. That’s sent gold down to $1,318. Most of the year’s gains have now been wiped out.

Crude is cratering, a barrel of West Texas Intermediate down more than 2% at $61.88 — the lowest in nearly a month.

Treasuries are once again selling off, pushing yields higher. The 10-year is back up to 2.81%.

In Washington our Congresscritters are inching toward a deal that will blow up the national debt even more than already planned.

Of course, that’s not how the mainstream is selling it. “The Senate is close to a deal on a two-year spending bill that could help avert a shutdown,” says The New York Times.

Suddenly, for the first time in months, it appears both Republicans and Democrats are OK with passing a budget that leaves immigration issues to be sorted out later. Makes sense: Put the budget in the rearview so both parties can get busy whipping up their bases about immigrants going into the 2018 midterms. Win-win!

So let’s see… That’s an average $12 billion a month of added spending, at a time we know the new tax law is already cutting into Uncle Sam’s revenue to the tune of $10–15 billion a month. No wonder Treasuries are selling off again today.

Yes, the deal would avert a “partial government shutdown” due to take effect at midnight Thursday night. But it’s still up in the air whether the deal would address the debt ceiling. If it doesn’t, that only sets up another D.C. donnybrook — and with an “X-Date” of mid-March that could tip the Treasury into default.

And now the story of a little girl in San Diego, her name unknown to the world, who has a fabulous future in entrepreneurship. 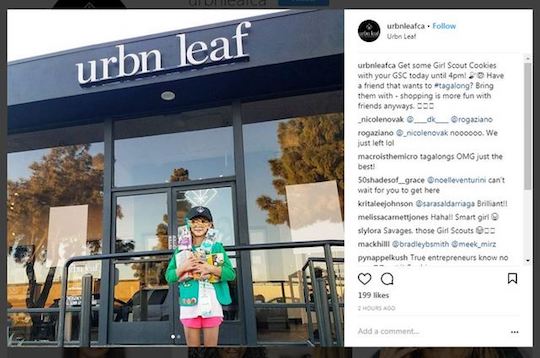 What does the national Girl Scouts organization think of this? Spokeswoman Kelly Parisi tells the Los Angeles Times that each region makes “all decisions on how the cookie program is run.”

Alison Bushan of the San Diego chapter tells the TV station everything appears on the up and up: Booth sales had not yet begun, but scouts can sell from a wagon as long as a parent or guardian is present.

Bonus points: The dispensary has a product called GSC that’s supposed to be flavored like Girl Scout cookies.

“The MSM was at a loss for explanation of market drop?” a reader writes.

“I am surprised they did not blame it on the changing of the guard. Jerome Powell was sworn in as Federal Reserve chairman on Monday.

“When his predecessor came along, I quipped, ‘It’s all over but the Yellen!’ Little did I think to heed my own joke and buy some puts timed to her departure — and some VIX.”

“You’re wrong about the swoon,” a reader writes after yesterday’s 5.

“Your blissful ‘push aside’ of Monday’s drop — mostly Greg Guenthner talking — is not the reality. It was a tremor, just as in 1929.”

The 5: Well we did say longtime readers might be shocked by our assessment that an economic meltdown is not nigh. And a search of our inbox shows you’ve been writing us periodically since late 2009.

We’ll let our assessment at 01:45 yesterday stand without elaboration. But we’re compelled to say the following to our longtimers, and we mean it with all respect, because it was you who helped build the foundation for Agora Financial’s growth.

As publishers and editors, we don’t have the luxury of telling readers to hide out in precious metals year after year while steering clear of a stock market that climbs relentlessly even if valuations are high. Not now.

It was completely appropriate for us to say that in the mid-2000s when stocks were pricey (and housing even more so). Gold and silver were outstanding alternatives at that time. They had both an intellectual and visceral appeal to readers with a “hard money” orientation. And I count myself in that group — it was around that time I started pondering a career change from TV news to financial publishing.

Maybe you’ve already amassed a respectable nest egg for retirement from your own business and/or investments; you’re comfortable staying out of the stock market and riding gold’s ups and downs. But many other people are looking to build that nest egg now. They might be (just as an example) in their late 50s-early 60s, fearing whenever the next downturn comes that they’ll have to take a buyout and be forced into retirement, maybe earlier than they planned. For them, sitting on precious metals waiting for The Big One is not an option.

Finding ideas that are viable options is hard work. Every one of our editors, no matter their specialty or their philosophy, is giving it their damnedest — mindful that trees don’t grow to the sky.

And if that means we take slings and arrows now and then — we recall a reader labeling Mr. Guenthner as “the Antichrist” five years ago when he (accurately) called a bear market in gold as it broke below $1,650 — well, we’ll deal with that.

Finally, for the readers who wrote in to take issue with Greg’s grammar when he said yesterday, “The market has grinded higher without a correction for too long”…

Yes, we get it. “Ground” is the past tense of “grind.” But I let it stand and our copy editors — no slouches, they — also let it stand.

Per the Grammarist website, “It has been used historically in various senses (the OED lists a number of examples from the 19th century and earlier), and a Google Ngram suggests the word was more common in the 19th century than it is now.”

But contemporary references are found as long ago as the 1960s: “It’s especially common in American sports commentary and writing, where grind means to overcome adversity by playing hard.”

And in any event, are you really going to make a case that “the market has ground higher”?

P.S. Oh, this is hilarious. As we get closer to virtual press time, “S&P 500 turns negative as rates move higher,” says CNBC.

As we said earlier, you can turn market volatility to your advantage using a “perpetual income strategy.” It pays well during normal times… and pays better during volatile times like now. Learn how it works at this link.