“No matter which way you slice it, this has been a very positive earnings season for investors,” says our income specialist Zach Scheidt.

“And as the positive data roll in, investor confidence continues to improve.

“That’s why the market has quickly stabilized following the pullback earlier this month,” continues Zach, “and why I expect this to be another positive year for investors (despite the unexpected speed bump in early February).”

There are still a few companies that have yet to release reports; however, the scorecard for earnings season is remarkable. Just take a look:

Zach noticed one stock sector had the highest percentage of companies that beat expectations… but it’s not sexy.

Zach’s talking about the materials sector. “Companies in this sector are often considered to be ‘boring’ because their businesses focus on mundane things like construction ‘materials,’ packaging ‘materials’ or manufacturing ‘materials.’

“I’m sure you’ll agree with me that there’s nothing ‘boring’ about a big investment profit,” Zach says. “Especially heading into a year in which we’re expecting to see more inflation and more spending on infrastructure projects (two key issues that should benefit materials companies).

“So this year, please don’t let any media or investor bias keep you from taking advantage of the best opportunities this market has to offer.”

“One of my favorite parts about the strong earnings from U.S. companies this quarter is the increase we’ve seen in dividend payments,” Zach goes on.

“At this point, it looks like the number of companies increasing their dividends to investors will be about 30% higher than the increase investors were expecting.”

“Not only are more companies making announcements that they will pay investors higher dividends this year,” he explains, “but the actual magnitude of those dividend hikes has been picking up.”

Here’s some outstanding news: Stocks aren’t just notching up dividends by a measly 1% or 2%; many companies are announcing double-digit percentage increases.

While the specter of higher interest rates has spooked some investors into selling dividend stocks and moving money to fixed income, Zach believes a “steady trend of higher dividend payments will make the best dividend stocks even more attractive to investors, increasing your income while at the same time boosting your wealth through higher stock prices.”

[Ed. note: The market remains volatile… but if you’ve been reading lately, you know Zach embraces volatility — because it gooses the instant-income payments he’s so fond of with his “perpetual income system.”

On Tuesday, he urged his premium subscribers to grab an instant $390 payout from an oil refiner. Don’t miss the next payout — learn how the system works right here.]

Apropos of dividend stocks, Zach says, “It is no secret that I like Walmart as a long-term investment.”

Hmmm… He’s seen their earnings report, right? Yep, he has.

“Walmart reported lower-than-expected earnings-per-share figures, which sent the stock spiraling down 10% — after all, competing with Amazon’s prices isn’t an easy task,” Zach says.

“This has investors questioning the company’s future… What’s next? Should I sell? Can Walmart really compete with Amazon?”

For a more in-depth discussion of Walmart’s earnings, we turn to colleague Greg Guenthner.

“We all know how Jeff Bezos’ mall-crushing romp has forced investors to ditch vulnerable retail plays as the sector continues to slide,” Greg says.

“But lately, we’ve seen signs of life from some well-established traditional retailers. The old-school stores that have successfully built their online offerings to compete with Amazon have held strong against the e-commerce king’s onslaught.”

Walmart — the biggest traditional retailer in the U.S. — has managed to give Amazon a run for its money over the past year. “The company made all the right moves. It even bought e-commerce upstart Jet.com as part of a bigger campaign to boost its online footprint,” says Greg. 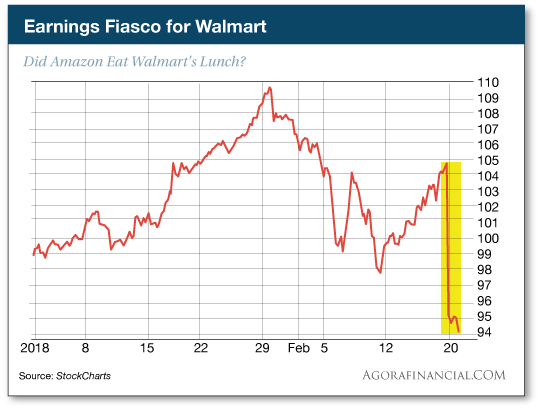 “Walmart topped sales estimates. But the retailer shocked investors with a rare bottom-line whiff, posting earnings far below consensus estimates. The stock gapped down at the opening bell and continued to fall more than 10%.

“By midday,” Greg continues, “the stock was having its fourth-worst session since 1980.

“The company finished the 2017 fiscal year with e-commerce sales growth of 40% — a huge boost for a massive commercial operation,” Greg notes. “But the brick-and-mortar retailer is now dealing with the growing pains of its online excursion.”

But all things considered, Greg agrees with Zach. “I’m not ready to bury Walmart just yet,” he says. “In fact, I believe the competition between Walmart and Amazon is just beginning to heat up — which should be good for shareholders of both stocks…”

It was a close call after another 380-point tumble yesterday, but the Big Board’s hanging tough and has rallied 41 points at last check. The S&P 500 sits at 2,721.

Bitcoin goes for $10,700 and, just for kicks, ethereum sits at $867. For once, crypto traders didn’t panic yesterday — not too much, anyway — when news broke that the Securities and Exchange Commission has issued dozens of subpoenas to companies involved in ICOs (initial coin offerings).

As Dave mentioned on Tuesday, gunmaker stocks tanked in February — far worse than the broad market. But then came news after the close yesterday… 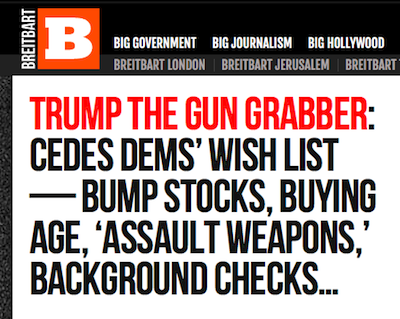 It’s as if Obama never left. On the theory that sales of semiautomatic rifles will soar in fear of a ban… American Outdoor Brands (AOBC), maker of Smith & Wesson, is up 6% as we write. Sturm Ruger (RGR) is up nearly as strong.

Suddenly the mighty American consumer is turning tightfisted in early 2018.

The Commerce Department is out with its monthly “income and spend” report. It’s packed with fascinating numbers. 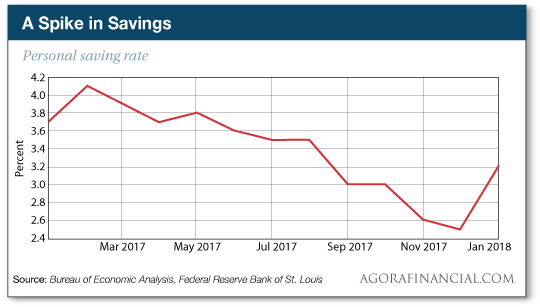 Many Americans got a boost to their take-home pay late in January thanks to lower withholding under the new tax law. But go figure, they’re not running out to spend it.

Also in this report — the Federal Reserve’s preferred measure of inflation, called “core PCE.” After a steady increase for four months, it’s now leveling off at 1.5%. That’s well short of the Fed’s 2% inflation target, but it won’t dissuade the Fed from raising interest rates again at its next meeting in two weeks.

“Last month was indeed a wild ride for the market,” says our technology expert Ray Blanco. But not so much for the tech sector…

“In just two trading days,” he says, “the Dow and S&P slipped a record number of points, throwing investors into a panic… and making analysts wonder if this is the end of a remarkable bull run.”

While the Dow’s — mostly — made a comeback, Ray’s really interested in the Nasdaq-100 Technology Index, up 5.5% since the beginning of the year.

Markets are mercurial, with plenty of ups and downs, but Ray’s convinced “it’s a safe bet to ride the powerful confluence of tech trends.

“Innovative companies are developing new technologies in everything from cancer cures to artificial intelligence,” Ray continues. “These trends are there, they are real and they don’t go away just because the market declined a few percent.”

Ray gives the lowdown on some trends to watch in 2018:

Ray’s take: “Things were hardly as bad as they were made to seem.” And Ray’s tech stock portfolio barely felt the volatility…

“A new election in Italy threatens to put the euro under stress again and to depress Italian stocks and bonds at least temporarily,” Jim Rickards says.

“Italy, the third-largest economy in the eurozone, is facing national elections on March 4.”

And Italian elections are synonymous with bedlam.

“Italy has had over 60 governments since the end of the Second World War,” says Jim. By way of comparison, the U.S. has had 13 presidential administrations in the same time period.

To say Italian elections are opaque is an understatement… and this one has all the drama of an Italian opera, with multiparty candidates ranging from a former waiter to a comedian, two descendants of Mussolini and the return of four-time prime minister Silvio Berlusconi.

“I am the Jesus Christ of politics,” says Berlusconi. “I am a patient victim, I put up with everyone, I sacrifice myself for everyone.”

(Look out for lightning!) 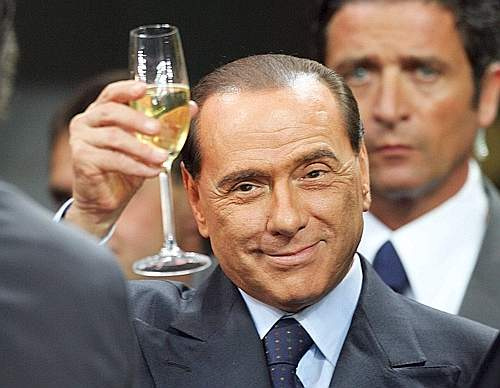 Raise a glass to me… and bunga bunga!

Yes, this is the Berlusconi of the infamous sex parties he called “bunga bunga” (we can’t make this stuff up). He’s not eligible for another term as prime minister because of a tax fraud conviction.

But as party leader of the Forza Italia, Jim says, “Berlusconi would have a powerful voice in selecting the next prime minister, cabinet ministers and directing government policies.

“The Forza Italia coalition most closely resembles a Trump-style party that is hard on immigration, soft on Russia and skeptical of multilateral institutions.”

What’s the likelihood Berlusconi and the Forza Italia will win? “Four parties combined, led by Forza Italia, are showing support at about 40% in the polls,” Jim says. “A showing of 40% or above in the election might give the Forza Italia coalition a chance to form a government.

“Markets have not fully priced this outcome because mainstream analysts have dismissed the coalition’s chances,” Jim continues. “That’s a mistake, just as it was with Trump.”

“It appears that Google may have silently joined the ranks of one side of the gun control debate,” says a Medium article.

“In the wake of the Marjory Douglas Stoneman shooting that left 17 dead, renewed calls for gun control are center stage.” As more activists pressure consumers to boycott the NRA and businesses associated with them, Google’s flown under the radar with efforts to censor the interwebs.

Until Twitter users “noticed that results in the most-used search engine in the world were returning nothing in the ‘Shopping’ tab when any query included a gun part, model or manufacturer…

“Any shopping result for anything related to ‘Remington,’ ‘Glock’ and ‘Colt’ turns up nothing.” 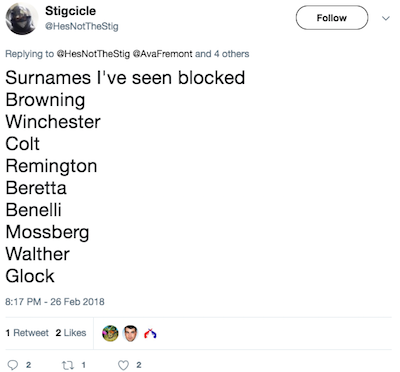 Medium goes on to note: “‘Steyr,’ an Australian town, has the misfortune of sharing the name with a gun manufacturer.” (Guess Steyr just dropped off the map… heh.) Need car parts for your Dodge Colt? How about Remington razors? Fuggedaboudit.

“Google’s actions in the wake of the tragedy are not a surprise given the company’s known political stances,” says Medium. “What is surprising is the action was taken in silence.”

Perhaps if wrongheaded censorship goes awry — say, blocking you from searching for something mundane as a caulk gun — the media giant wants plausible deniability.

The drop coincides with the White House announcing plans for a tariff on imported steel and aluminum. More tomorrow…