At that time, the stock market and the economy were five years into the recovery from the Panic of 2008. The market’s recovery had been impressive — the S&P 500 up nearly 180%. The economy’s recovery? Not nearly as good.

“It concerns us,” wrote Blackrock’s Larry Fink, “that in the wake of the financial crisis, many companies have shied away from investing in the future growth of their companies. Too many companies have cut capital expenditure and even increased debt to boost dividends and increase share buybacks.”

Here at The 5, we furnished a real-world translation: “After five years, you turkeys have cost-cut as much as you possibly can. If you expect to keep growing your earnings, you jolly well better start investing in the future of your businesses to attract more customers. You do think such investments will pay off, right? Don’t you? Anyone? Bueller?”

Four years after Fink wrote his letter, here is what has changed: Not one damn thing.

The economic recovery, meanwhile, is still weak by historical standards. Yes, the unemployment rate is low… but that’s because millions of working-age adults gave up looking for work, permanently. They’ve departed the workforce and they’re never coming back.

And companies still aren’t investing in their future growth — even with the windfall from corporate tax reform.

From yesterday’s Financial Times: “U.S. companies are on track this year to return a record $1 trillion to shareholders, as Donald Trump’s tax cuts prompt boards to boost buybacks and dividends at a faster rate than their capital expenditure, research and development budgets or wage bills.”

Let’s talk briefly about what a company can do when it’s sitting on a boatload of cash.

Basically, the company has five choices…

Last month, Goldman Sachs issued a forecast about how the S&P 500 companies planned to spend their cash during 2018… 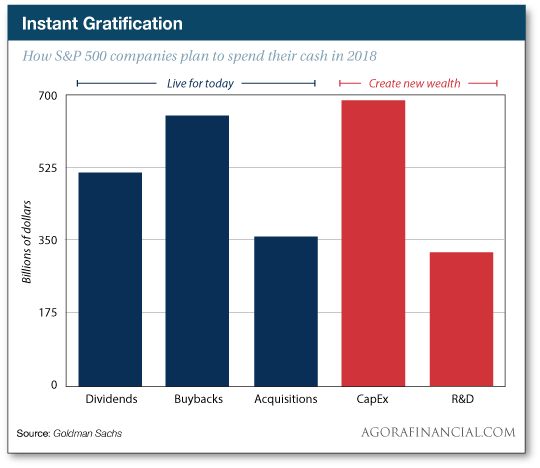 That’s an awful lot of living for today.

Don’t get us wrong. We’re not exercising a value judgment here. We’re not saying Corporate America is somehow shirking its responsibility to invest in the future.

We’re dealing with the world as it is, not as we might wish it to be. Clearly CEOs are looking around and not seeing an abundance of opportunities to invest in the future — or opportunities they’re confident will pay off, anyway. So yes, absolutely, they should return some of those boatloads of cash to shareholders.

But no, it doesn’t say much about those CEOs’ optimism in a long-term economic boom, either.

Again, the tax cut has changed nothing in that regard. “Companies had enough money before the tax act to hire workers, to do more capex, to invest more,” S&P Dow Jones analyst Howard Silverblatt tells the Financial Times.

“The bottom line is sales hadn’t picked up.”

For many companies, sales are finally starting to pick up. We are, after all, in the late stage of an economic boom, albeit a historically weak one. Thus, companies as diverse as Goodyear, McDonald’s, Nvidia and Merck all promised in their latest quarterly reports to pour more money into the future than the present. But by and large, the trend is still toward buybacks and dividend increases.

For a retail investor, buybacks and dividend increases are nice. They won’t, however, make you rich overnight.

But acquisitions? Own a company that’s “buyout bait” and you could make 10 times your money in a day. Just owning a plain-vanilla stock. No options or anything fancy.

Look again at that chart above — the middle bar especially. There’s a $350 billion pile of cash earmarked for acquisitions… and you can grab a chunk of it during what one of our top analysts is calling “the year of the takeover deal.” Give it a look right here — no long video to watch.

To the markets… where stocks are stalled and gold is a standout.

The major U.S. stock indexes rallied after we went to virtual press yesterday, but they’re giving back some of those gains this morning. At last check, the Dow is 24,750 — stuck about 7% below its all-time high in late January.

Gold began rallying in Hong Kong overnight, and the momentum carried westward to London and New York. At last check the bid is back to where it was two weeks ago at $1,337.

Usually, gold rallies on the proverbial “geopolitical tensions”… but those have dialed back this morning with word that North Korea’s government is ready to talk about some sort of “denuclearization.” Go figure.

Trade-war worries are still out there: Early this morning, Bloomberg reported the European Union is proposing 25% tariffs on U.S. goods including steel, clothing, footwear, bourbon and motorcycles — retaliation if the president follows through on his steel and aluminum tariffs.

But will he? Bloomberg also reports that on Thursday, the White House will host CEOs from automakers, beverage can makers and other industries that stand to be hurt by higher prices of imported steel. The meeting has been organized by Gary Cohn, director of the White House National Economic Council — and leader of the globalist faction within the Trump administration.

The protectionist faction will be on hand too. Grab the popcorn…

And now a statistical oddity that points to a strong 2018 for stocks, the last few weeks’ turbulence notwithstanding.

Jonas consulted the historical data in his proprietary Archimedes trading platform and dug up the following: “Since 1987 there have been 35 prior instances where the S&P 500 dropped 1% or more for three straight sessions.”

So what happens after those episodes? “In each of those 35 prior instances,” says Jonas, “the big S&P 500 has ended up about 10% higher six months later. A year out, that performance shoots up to around 15%.

“Statistically speaking, price action like what we saw last week is more or less the sign that the storm is passing. Of course, that’s not a guarantee of what’s to come. History may rhyme in the financial markets, but it never repeats exactly.”

Stupid bonus tricks: United Airlines is backing away from one of the most harebrained incentive plans ever hatched by Corporate America.

Up till now, Chicago-based United has issued quarterly bonuses under which eligible employees could earn up to $1,500 a year.

Last Friday, the company announced a “better, more exciting program” — that is, a bonus lottery. As long as the firm reached its quarterly performance goals, eligible employees could enter to win prizes — starting at $2,000 all the way up to a grand prize of $100,000.

“Of course,” pointed out the Chicago Business Journal, “only the winners of this lottery drawing would get the prizes, apparently leaving the rest of eligible employees with nothing to show for their contributions in helping United achieve its performance goals.”

By yesterday, United CEO Scott Kirby said he was “pressing the pause button” as he reviewed employee feedback. Shocking, huh?

Then again, airlines don’t have a very good fix on economic incentives anymore. For instance, the feds relieved the airlines of any liability for security failures the morning of Sept. 11, 2001. Then the feds formed the TSA, taking security out of the airlines’ hands for good.

Little wonder United sicced the cops on that bumped passenger a year ago — you know, the one who was dragged off the plane?

To the mailbag, where we’re hearing from both a longtimer and a newcomer. “How’s Addison?” writes the longtimer.

“I hardly ever hear from or about him. Any updates that he is OK would be appreciated. I only know of him through his writings and a brief encounter at Rancho Santana in Nicaragua, but I miss hearing at least how he is doing.”

The 5: If you’re a newer reader, you should know Addison Wiggin is the executive publisher at Agora Financial. He penned The 5 in its early years before handing it off to me somewhere around 2012.

Addison has indeed stepped away from day-to-day writing in recent years, but that’s because he’s been busy crisscrossing the globe, building up Agora Financial’s satellite offices in Britain, France, Australia and other countries that don’t immediately come to mind. And with great success, too: Who knew that an American like Jim Rickards would be such a hit in France? I mean, not as big as Jerry Lewis, but still…

And when he’s at our world headquarters in Baltimore, Addison is consulting with up-and-coming publishers busily building their own businesses under the growing Agora Financial umbrella. (We might have a thing or two to say about that in the next few weeks.)

And now the newcomer: “I am not comfortable with too many of the places that you’re taking this,” a reader writes after last Friday’s episode.

“Is this about finances, or is this about politics? Images of Hillary as the devil sparring with Jesus, opinions about vinyl versus CD, more opinions about guns… this is not what I paid for. It looks like I’m going to have to ask for my money back. I’m genuinely offended by the content here. “

The 5: No, this isn’t what you paid for. The 5 is a free bonus that comes with whatever paid publication you subscribed to.

Truth be told, we don’t like talking about politics. Unfortunately, politics infringes on all manner of moneymaking activity, and sometimes we have to address it whether we like it or not. Years ago, when Addison was still penning this daily exercise in financial infotainment, someone wrote in and urged him to stick to “coldhearted financial research.”

Addison’s reply: “Politics are the problem, and you ignore them at your peril.”

So if the “Russian meddling” hysteria expands from the realm of U.S. elections into the realm of U.S. energy, yes, we’re going to say something about it. And with any luck, we’ll do it irreverently — thus the reminder of the ridiculous meme that some people sincerely believe helped turn the 2016 election.

In any event, with The 5 you get what you pay for. Heh…

P.S. That was quick: Yesterday morning, Alan Knuckman urged his Weekly Wealth Alert readers to buy call options on Micron Technology. Within hours, he urged them to take 50% gains on half the position — an order that was filled by midafternoon.

This morning, he urged them to take profits on the rest of the position. By the time that order’s filled, it should be a clean double — a 100% gain.

Weekly Wealth Alert could prove the best “upgrade” you could make to your account with us. To learn whether you’re eligible, just follow this link.