The Hidden “Gift” In the Tax Cut

If you have a health savings account at work and you’re maxing out the family contributions this year, then you got the same message from your HR department that I did yesterday. (Or you will soon.)

On Monday the IRS reduced this year’s maximum family contribution by $50. “You will see a reduction in your payroll deduction accordingly,” said the note from Agora HR. It included a link to the relevant IRS bulletin, which was decidedly unhelpful in explaining why this move came about.

With a Google News search, I came upon a statement from an HSA provider called PayFlex, which said the new tax law “changed the way inflation-related increases are calculated.”

And then I realized… it’s “chained CPI.”

We told you about it last year while Congress was debating the tax bill. The “chained” consumer price index is a measure of inflation that understates the increase in your cost of living even worse than the government’s conventional inflation number.

As the years go by, chained CPI will have the effect of bumping you into a higher tax bracket sooner than would have happened otherwise. In addition, the standard deduction will grow more slowly.

But the impact on HSA contribution limits didn’t dawn on me — until now.

Don’t get me wrong: A $50 increase in my adjusted gross isn’t going to wreck my 2018 tax planning. But it’s a vivid illustration of how government can change the rules on you with little or no warning.

Anyway, just beware that chained CPI could slowly push you into a higher tax bracket even if your income stays stagnant. And that provision of the law is permanent — while the new lower rates expire after 2025.

Oh, and whenever the powers that be get around to reforming Social Security… count on chained CPI being used to lowball your annual cost-of-living adjustment.

With that public service announcement out of the way, we move on to other business…

Five weeks of market melodrama is over — at least for now.

It was five weeks ago today the Labor Department issued the January jobs report. Traders freaked out because it showed signs of accelerating wage growth: Accelerating wage growth would mean higher inflation… higher inflation would mean additional tightening by the Federal Reserve… additional tightening by the Fed would choke off the easy money that Wall Street’s enjoyed since 2009… and an end to that easy money would hurtle civilization into a black hole.

That was the proximate event for the big sell-off and all the volatility since then. Or so the crepe-hanging mainstream would have you believe.

This morning the Labor Department issued the February jobs report. We’ll get into the particulars shortly, but suffice it to say the freakout is over. The Dow, the S&P 500 and the Nasdaq are all up 1% on the day or better.

Alan Knuckman, our boots on the ground in the Chicago options trading pits, points out that the Nasdaq-100 — the 100 biggest nonfinancial companies trading on that exchange — has returned to all-time highs this morning. “It’s up 10% in 2018, an amazing 31% in the last year, and an astounding 150% in just the last five years.”

The S&P 500, meanwhile, is now only 100 points below its all-time high reached in late January. 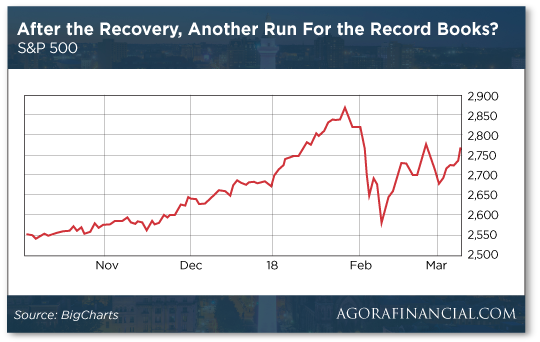 [Ed. note: Since launch of Alan’s 42-Day Retirement Plan last October, every closed trade has been a winner. All 25 of them.

That’s a time span covered by the entirety of the chart above. Up market, down market, sideways market — doesn’t matter. And that includes a 50% gainer this morning on Goldman Sachs call options that Alan recommended only four days ago.

Alan says the biggest gains are yet to come, starting about a month from now — for reasons he explains when you click here. (No you won’t have to sit through one of those “boring, long-winded videos.”)]

So about those February job numbers…

For starters, wage growth came in lower than expected — a 0.1% increase compared with an average guess of 0.2% among dozens of economists polled by Bloomberg. Year-over-year growth of 2.9% has eased to 2.6%. So the alleged trigger for the sell-off starting five weeks ago is no longer operative.

Meanwhile, the wonks at the Bureau of Labor Statistics conjured 313,000 new jobs for the month — a number way higher than the “expert consensus” was counting on, indeed the highest figure in a year and a half.

Many months we mention that real-world rate in passing. If you’re a newer reader, here’s a crash course in what it means.

The unemployment rate commonly reported on the news is called “U-3.” But the Labor Department maintains another figure called “U-6.” That includes the U-3 people… plus all the part-timers who’d like to work full-time… plus all the people who gave up looking for work in the last 12 months. The current U-6 rate is 8.2% — double the U-3 rate.

But that’s still not the whole picture. Economist John Williams from an outfit called Shadow Government Statistics calculates the unemployment rate the way the government did it 40 years ago, before the wonks started fudging it.

This rate includes all the U-6 people… plus all the other people who gave up looking for work longer than 12 months previous. As we mentioned on Tuesday, there’s a staggering number of working-age people who’ve departed the workforce for good. They’re never coming back.

For the record: The number of states that collect a sales tax on precious metals is down to less than 20.

The most recent entrant is likely to be Wyoming. In recent days, both houses of the legislature overwhelmingly passed the Wyoming Legal Tender Act. Even if Gov. Matt Mead vetoes it, there appear to be enough votes for an override.

Says sponsor Rep. Roy Edwards (R-Gillette), “Imagine going to the grocery store and asking the clerk for change for a $20 bill and being charged 80 cents in tax. That’s what we’re doing in Wyoming by charging sales taxes on precious metals and we’re taking steps to change that.”

The Wyoming legislation is the latest in a wave that began in 2011 with Utah — where gold and silver were exempted from state capital gains taxes. In most states the legislation affirms gold’s and silver’s statuses as legal tender. Not that that’s going to get us back to a gold standard anytime soon… but hey, one step at a time…

Most cryptocurrencies can’t catch a break as the week winds down. Bitcoin is back below $9,000 and many other cryptos are down 5% or more in the last 24 hours.

To the mailbag, where a reader’s remarks about tariffs take a surprising turn…

“I know there are many who argue that we need China to buy our debt — especially with upcoming deficits — and that if a trade war ensues, they could harm us by refusing to buy our bonds, notes and bills.

“It brings to mind an old Texas bit of wit: If you owe the bank $20,000, you have a problem. If you owe them $2 trillion, the bank has a problem. Would it really behoove China to trash our debt seeing how much of it they hold? How would that play out when the smoke cleared and the accounts were settled?

“And perhaps the most disturbing thought of all… what if we just let the whole damn thing come apart at the seams a la 1921 and see where the pieces fall? The people who actually do things… you know, labor… I know we’ve been forgotten here lately… would still know how to change tires, build houses and write code. Seems the people to be hurt most would be the C-class citizens (CEOs, CFOs, etc.) that have been enjoying a disproportional percentage of the gains in productivity.

“Ugly? Oh, God, yes, it would be. But at least it would be fast, instead of the slow bleeding out of our nation’s soul. What scares me is that I suspect a growing portion of the have-nots would welcome such a thing.

“I love the idea of America. I love my country, and the people I have met, who are all so wonderfully different all across this nation. But the older I get the easier it is to see past the illusion of nationalism to the seat of the corporate oligarchy masquerading as a freely elected government.

“This isn’t the country I grew up in or believed in. This isn’t the republic our Founders envisioned (or God, I hope it isn’t. What kind of cruel twist would that be?) This isn’t sustainable. There is a fight coming for the soul of our nation. I hope we can hold it together.”

On that note, we pivot to one of our longtimers: “I mean this… in all sincerity,” he writes.

“Over the years has the customer base changed at Agora?

“Or has everyone changed and become more combative and more sensitive and willing to jump on any perceived affront to their particular view of the world?

“It seems we used to have these wide-ranging discussions about all manner of topics, including a previous stint on vinyl versus CD (I spent $1,100 on my turntable in 1981. After my first CD, I rarely played it again.), as well as the Tapir, and I think my all-time favorite was the Honey Badger.

“I enjoyed the occasional sprinkling of these wide-ranging and often humorous diversions into the fetid stench of the financial/political beat.

“Just genuinely curious if you see the same changes.”

The 5: Heck, I don’t even remember a previous vinyl-versus-CD discussion. You do this most every business day for seven-plus years and some of it starts to run together… Heh.

As for the “combativeness,” yes, it’s bad and getting worse. Here’s a sample from the mailbag that didn’t make the cut this week: “Due to your blatent [sic] leftist politics I no longer read your bull**** report. Thanks for not wasting anymore [sic] of my valuable time.”

Who knew our socialist bona fides were so impeccable?

It comes back to the Georgia State professor whose remarks we cited after Charlottesville last summer: “When voters divide into opposing camps, they come to view the other side not any longer as a political adversary… but instead as a threatening enemy to be vanquished.”

But it’s more than that: In this environment, people who are turned off by politics… people who exercise independent thought… and people who refuse to enlist in either the cult of #MAGA or the cult of the #Resistance are instantly condemned as belonging to or enabling “the other side.” Just look at the spitting rage Democrats direct at an independent-minded progressive like Glenn Greenwald when he expresses skepticism about “Russian meddling.”

It’s depressing as hell. And we fear it might become a social phenomenon that defines the economy and the markets a few years hence.

Man, what a downer going into the weekend. Sorry ’bout that…

P.S. Make that 26 winners out of 26 closed trades in Alan Knuckman’s 42-Day Retirement Plan. While this episode of The 5 was in progress, Alan urged readers to sell half their position in Oracle call options. This is another trade he laid on only four days ago.

As we said earlier, even more lucrative gains are in store starting next month. Alan explains all at this link.