“As the Chinese saying goes, it is only polite to reciprocate,” read the pithy statement from the Chinese foreign ministry.

When we left you yesterday, we were anticipating a White House announcement identifying which Chinese goods would be hit with new import tariffs. The announcement was due by Friday.

In the event, the announcement came shortly after the market close yesterday. A 25% tariff will be applied to some 1,300 goods — everything from medical equipment to machine tools to auto parts. All told, about $50 billion in imports.

Only 12 hours later came the “polite reciprocation” from Beijing — a 25% tariff on 106 U.S. goods, also totaling about $50 billion worth. Unlike the penny-ante tariffs the Chinese announced last weekend, these are going to leave a mark on key sectors of the U.S. economy — soybeans, orange juice, autos. 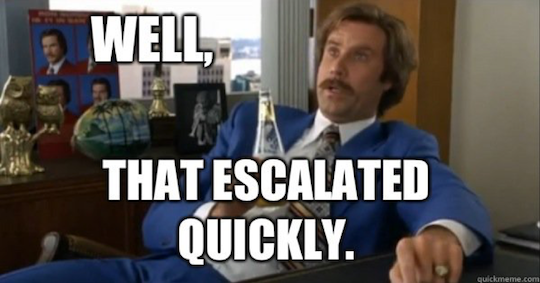 To be clear, these tariffs aren’t a done deal yet. A public hearing in Washington is set for May 15. It’s conceivable that if Washington and Beijing come to terms on opening up the Chinese market to more U.S. goods, none of these tariffs will come into effect.

But that’s not the way Wall Street is betting this morning: As we write the Dow has tumbled 350 points on the day.

At roughly 23,700, the Big Board is still about 200 points above its 2018 low set on March 23. But that’s splitting hairs: For all intents and purposes, the Dow is back to its levels of late November. 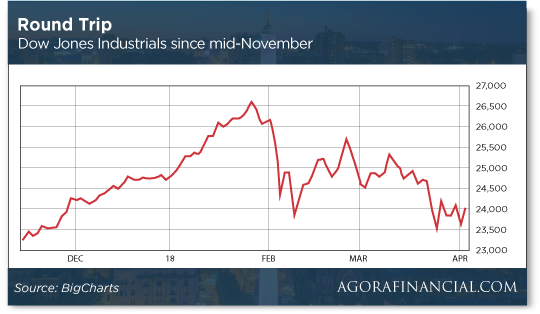 But the trade-war play we mentioned yesterday, recommended in Jim Rickards’ Project Prophesy, is up 76%. And Jim believes there’s still more upside to this play amid the market turmoil, as he explains right here.

For chart-watcher Greg Guenthner, it’s the reaction to the news that’s a bigger deal than the news itself: “Negative headlines rolled off the market like water off a duck’s back during last year’s market melt-up,” he reminds us. “Trump could have started a land war with China and the Nasdaq would’ve finished the day in the green.”

But no more. And that leaves markets at a delicate moment: “The market is at a point where it could tank… or just as easily squeeze shorts and rally.”

Assuming the market tanks, we daresay it’s not too soon to pose an outside-the-box question.

Recall how the president was keen to take credit for every new stock-market record, right up to the peak in late January.

When the major indexes started their big slide in early February, on the heels of a seemingly good jobs report, he had an interesting take… 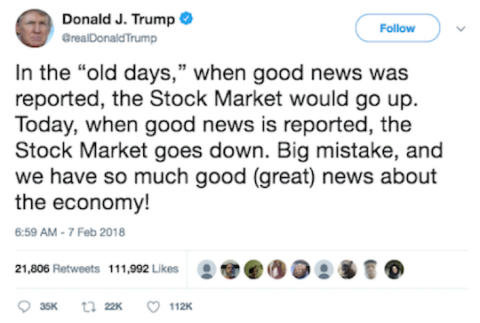 Here’s our question, again assuming the slide accelerates: How soon before he lashes out and says Wall Street is engineering the slide on purpose to sabotage his presidency?

You can just imagine it, right? And the claim would have the ring of credibility: Four days before the election in 2016, we told you how nine of the 10 biggest presidential-campaign donors gave to Hillary Clinton. (Home Depot’s Bernie Marcus was the 10th.) Among donations of $1 million or more, Clinton collected $180 million — compared with Trump’s $33 million.

It would be smart politics, too: Clinton’s ties to Wall Street were among many factors that made her a less-than-ideal candidate for the times.

And imagine the tut-tutting MSM reaction: “How irresponsible of this president to throw sand in the gears of the market economy this way.” They’ll probably say Putin put him up to it!

We don’t know when, or if, that moment will come. But if it does, and a sitting president suggests the stock market’s most important players are out to get him… well, every asset class will be plying uncharted territory.

Shorter term, however, the latest personnel moves at the Federal Reserve will likely be good for Wall Street — and for gold.

In theory the Fed’s 12 regional banks are equal, but in reality the New York Fed is more equal than the others. The New York Fed chief has a permanent vote on the Fed’s Open Market Committee — the body that sets interest rate policy every six weeks. And he’s typically considered part of a power troika that includes the chairman and vice chairman.

But unlike the chairman and vice chairman, the New York Fed chief is not subject to Senate confirmation. He or she is chosen by the bank’s board of directors, who hail from private banks. Critics like Sen. Elizabeth Warren (D-Massachusetts) are carping about Williams’ appointment, but that’s all they can do.

It was under Williams’ watch at the San Francisco Fed that San Francisco-headquartered Wells Fargo opened millions of bogus accounts in the name of existing customers, from which the bank skimmed fees of up to $39 a month.

“The concern,” says Ms. Prins, “is that if he can’t properly oversee ‘a huge institution in his backyard,’ how can he oversee the goliaths on Wall Street? For the biggest banks, they see opportunity, though. Williams is considered a positive by major Wall Street banks that should benefit from his stewardship.”

Williams also has a reputation as a “dove” when it comes to monetary policy. If there’s disagreement within the Fed later this year about whether to continue raising the fed funds rate, count on Williams to argue against raising it. That’ll be bad for the dollar but good for gold.

Speaking of which, gold is holding steady today at $1,335.

A black market bubbles to the surface as a result of Philly’s soda tax.

This is a story we’ve been following at The 5… filed under — well-intentioned? — bureaucracy gone predictably sideways.

Starting Jan. 1, 2017, the city of Philadelphia imposed a tax of 1.5 cents per ounce on sugary soft drinks.

According to an article at Reason, “a good chunk of that lost revenue” can be attributed “to black-marketeers carting in soda from untaxed jurisdictions.”

“People are going out of Philadelphia, to Delaware, New Jersey and the surrounding counties, and they’re bringing back soda,” says Danny Price, secretary-treasurer of Teamsters Local 830, representing soda bottlers and delivery drivers.

“The soda is then sold to local businesses looking to skirt the city’s tax,” Reason says.

Florida marketing firm Catalina found soda sales at Philly grocery and drug stores dropped 55% in the five months after the soda tax was imposed. During that same time, sales of soft drinks outside the city rose 38%.

“The Pennsylvania Supreme Court will soon hear a case challenging the soda levy on the grounds that it is an illegal double tax,” says Reason.

“But until the tax is either struck down in court or repealed at city hall, the smuggling is likely to continue.”

“Now this is fascinating,” writes one of our regulars on the qualms Swedes are having about their rush toward a cashless society.

“Sweden is supposed to be a model of ‘Nordic socialism.’ Apparently, it’s another important test case for the war on cash as well.

“But Stefan Ingves (governor of Sveriges Riksbank, the central bank of Sweden) is having second thoughts about it? That would truly differentiate him from most of the world’s central banksters. As Jim Rickards has explained, lately their mandate seems to include herding us into a digital slaughterhouse where our wealth can be frozen and/or seized.

“By the way, if the Swedish government had anything to do with that opinion poll — regarding how many citizens still want to use cash — the number may be even higher than seven out of 10. I’ll go out on a limb and say it’s more like 10 out of 10.

“This is another wake-up call, folks…

“There seems to be a problem that is getting overlooked and underreported in the marijuana industry,” a reader writes — “the crashing price.

“I live in Oregon so I can only speak of what is happening here. The price for wholesale weed dropped from $1,500/pound to $500/pound in one year! And that is if you had connections with a dispensary buyer. All dispensaries at some point raised their hands and said, ‘Enough!’ Most growers could not even find a willing buyer. A legal one, anyways.

“Many have folded their hand after last year and are no longer growing. There are empty grow sites everywhere in my county. Including my own. I leased my farm to a grower last year and it sits empty now after the offer he gave me for this year was simply not worth my headache. I am not even looking for a grower. The growers cannot make enough after the state rapes them with so many outrageous fees.

“The local dispensary parking lot looks empty most of the time compared with one year ago. Soooo many smokers are growing their own or know friends who they can get it from for next to nothing. This has to hurt the industry just like the crashing price of oil hurts the oil industry. It will be interesting how this plays out, but all is not booming for weed.”

The 5: Thanks for the boots-on-the-ground perspective. It’s always helpful.

The laws vary from state to state, often wildly. It’s going to take time for everything to shake out.

We documented last year how the rules in Nevada were so tight the state declared an “emergency” and raised the cap on the number of legal distributors (lest the state sacrifice the revenue it was counting on).

For this reason, you can’t throw a dart at a list of penny pot stocks and expect to make money no matter where it lands. Our authority on this sector, Ray Blanco, works hard to stay on top of local developments and suss out how they’ll affect individual companies. Every bit of new information helps, so thanks again for writing in.

P.S. A note from Jim Rickards that came in as we were writing…

Don’t believe the Wall Street analysts who say the trade war is not real. They base this on the fact that tariffs are “announced” but not yet in effect and China-U.S. have 60 days to talk about it.

True, but who thinks China’s $500 billion trade surplus with the U.S. is getting resolved in 60 days? This view is more wishful thinking by Wall Street. By publishing their “list” at 5:00 a.m. EDT today, China just brought a knife to a gun fight. Trump wants results. The trade war is just getting started.

Tariffs on $50 billion in imports announced yesterday? That’s only 10% of China’s trade surplus. So yes, there could be a long way to go before this is all over. And every new announcement will be a shock to the stock market’s system.

But play it right and you can generate big gains. You can thrive amid the tumult. That’s what some of Jim’s premium subscribers are doing — as mentioned earlier, a 76% and counting on a trade-war play. And Jim says there’s more where that came from. You can find his brand-new update on the state of play at this link.