The Market’s Many Distractions (They Go Away Friday)

“It’s all about earnings,” our Alan Knuckman has been saying for days now… and thank God for that.

Earnings season gets underway on Friday when three of the four biggest banks report. But until then, the market is being tossed and turned by everything but earnings.

When we left you yesterday, stocks were rallying big-time because the threat of a U.S.-China trade war was supposedly receding. The Dow was up some 400 points. And then came news of the FBI raid on the office of Donald Trump’s lawyer. That 400-point gain became a mere 46-point gain by the close.

Today? The Dow is up more than 450 points as we write. Chinese President Xi Jinping announced plans to “open” China’s economy, including lower tariffs on imported cars.

Another wild card: Facebook CEO Mark Zuckerberg testifying to Congress — an event sure to generate more heat than light.

Too, the Donald has junked plans for a Latin America trip so he can carry out air strikes on Syria. (More about that momentarily.)

But come Friday, it will once again be about “the fundamentals,” the stuff that matters most — sales and profits. And the stakes couldn’t be higher…

“Earnings season is arriving at a delicate juncture for the bull market,” the Financial Times is quick to remind us.

“This view is supported by the Cboe Skew index — calculated using the price of out-of-the-money options and seen as an indicator of investors protecting against extreme risk — which is close to its lowest level of the year.”

Alas, the salmon-colored rag can’t help itself — invoking all the nonfundamental stuff.

“The benchmark S&P 500 has turned negative for the year,” it says, “on concerns about trade policy, a rise in borrowing costs and heightened regulation of the large tech companies that had led share gains.”

The good news is that Q1 earnings reports can go far to ease those jitters.

The FT continues: “Wall Street analysts have forecast broad-based earnings gains, with all 11 sectors of the S&P 500 expected to report growth. Seven of them, led by energy, materials and tech, are seen reporting earnings per share increases in the double digits compared with a year ago.”

All this is old news to Alan Knuckman. He sent an eerily prescient message last week.

Alan, our man at the Chicago Board Options Exchange, said Thursday: “EARNINGS drive markets.” And he urged investors to tune out trade-war drama (farce?) and focus on reality.

“Earnings growth drives stock prices, pure and simple — and they look to be extraordinary this quarter,” Alan goes on.

“S&P 500 earnings are expected to rise 17% in the second quarter,” Alan says. “FactSet notes that analysts have upped their projections for first-quarter earnings by a whopping 5% since the start of the year.

The earnings season catches fire this week when Citigroup, JPMorgan and Wells Fargo report Friday. Will you be ready?

Just over six months ago, we launched an options trading service keyed to the 42-day earnings season. With typical bravado, we called it the 42-Day Retirement Plan — heh.

To date, Alan has closed out 26 trades… and every one of them is a winner. And those six months cover a period when the market was going up, up, up… and more recently when it’s been swinging wildly.

And with a record jump in analyst projections, the gains this quarter could be even more extraordinary, as Alan explains in this exclusive interview for readers like you. This is information he’s not sharing on CNBC or the other financial channels. You’ll want to give it a look now, before the earnings train leaves the station.

Only 24 hours remain of the 48-hour window in which the president promised “forceful” U.S. action against the Assad government in Syria for a chemical attack. That’s even though Reuters reports the U.S. government “had not yet conclusively determined whether the attack was carried out by President Bashar al-Assad’s Syrian government forces.” Can’t let details get in the way…

A year ago tomorrow, we traced a line from Trump’s most recent attack on Assad’s forces… back to Bill Clinton’s attack on Saddam Hussein’s Iraq at Christmastime 1998. Remember the “Monica missiles” he launched to distract Americans from House impeachment hearings?

“Stormy missiles” doesn’t have the alliteration going for it, but they’ll serve the same purpose.

Overseas, the Russian stock market is getting back on its feet after taking a massive hit yesterday.

On Friday, after the Russian markets had closed for the weekend, the Trump administration imposed sanctions on seven wealthy Russians in response to — well, it’s not apparent what. Just because, apparently. Said Treasury Secretary Steve Mnuchin, “The Russian government engages in a range of malign activity around the globe… Russian oligarchs and elites who profit from this corrupt system will no longer be insulated from the consequences of their government’s destabilizing activities.”

Yesterday when markets reopened, the ruble took a 2% spill and Russia’s Micex stock index fell the most in over four years. 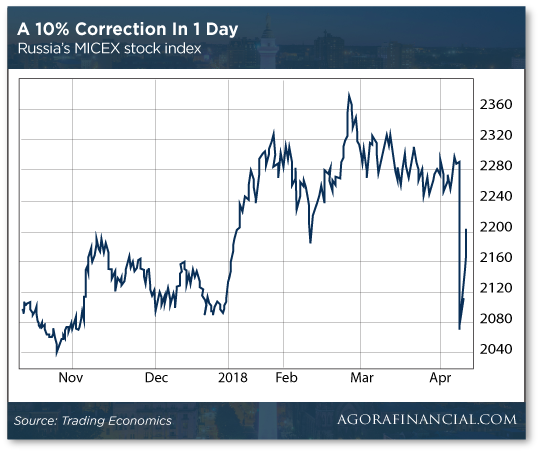 We’re not sure how this development fits in with the narrative that Vladimir Putin controls Trump’s every move — ditto for the impending attack on Putin’s ally Assad in Syria — which is probably why you haven’t heard much about it.

Writing at the provocative global-affairs website The Duran, Alex Mercouris calls the latest sanctions “incitement to a coup. All other steps the U.S. has taken having failed, Russia’s businessmen (‘oligarchs’) are now being told that unless they engineer the overthrow of Russia’s government they will be sanctioned.”

Small-business owners are still feeling exuberant — but they’re also dialing back their expectations a bit.

The National Federation of Independent Business is out with its monthly Small Business Optimism Index. Last month rang in at 107.6, the second-highest number ever. Now it’s backed down to 104.7, a five-month low. Survey respondents are getting more cautious about the outlook for the economy in general and their own sales in particular.

For the third straight month, “quality of labor” is tops when business owners are asked to cite their single-most important problem; 21% of survey respondents say their biggest headache is finding good help. Regulations have retreated to a distant second place at 14%, and taxes were cited by 13%. Taxes haven’t rated that low in the survey since 1982.

The latest projections for the federal budget deficit are out. Do you want the (sorta) good news or the (really) bad news?

We’ll start with the bad news.

The Congressional Budget Office says the deficit for fiscal 2018 will top $800 billion — way more than the last estimate of $563 billion. And the deficit will reach Obama-era $1 trillion levels by 2020 — two years earlier than previously projected.

So… we’re ahead of schedule. Why?

Per a Bloomberg article, “Deficits are growing as the Trump administration enacted a tax overhaul this year that will lower federal revenue and Congress approved a roughly $300 billion spending increase.”

Michael Peterson of the budget watchdog Peterson Foundation says: “[The] CBO report confirms that major damage was done to our fiscal outlook in just the past few months.”

The CBO has upped its estimate of economic growth this year from 2% to 3.3%.

Here’s the qualifier: The CBO’s estimates of economic growth usually turn out to be too optimistic. So tax revenue might turn out to be even lower, and the deficit wider, than the CBO is counting on.

Citibank wants nothing to do with this seedy business.

A pot dispensary in California “adapted” the name and logo of the New York bank…. 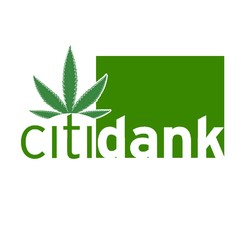 Says the New York Post: “The dispensary, which just opened last month, said in a full back-page ad in Coachella Valley Weekly that it caters to ‘all your danking needs,’ including early bird specials, happy hours from 6 p.m. to 9 p.m. and a ‘special gift’ for the first 50 customers.”

You know what they say: The early bird gets the… weed?!

Citibank has sent Citidank a cease-and-desist letter. Says a bank spokeswoman, “Unless you are as high as a kite, you know that Citi isn’t affiliated with this business in any way and we have requested that they stop using Citi’s name and logo.”

Which sorta begs the question: If everyday folks have the common sense to know the one’s got nothing to do with the other, why even bother having the lawyers draft a nastygram?

“I have another ‘road sign’ for you in your prognosis of the late-stage boom, as described in yesterday’s 5,” a reader writes.

“All my neighbors, I mean practically all, in the past few months have purchased brand-new cars — new pickups, new Lincolns — my brother included got a new Subaru Impreza stick shift, in March ’18.

“What was the old adage about women buying lipstick and pantyhose?”

The 5: That’s interesting, although we understand if you don’t want to pry too hard for the truly revealing information: How much did they borrow for those new vehicles? Better yet, did they roll over an outstanding balance on their previous vehicle into the new one?

Right now has got to be the last hurrah for auto sales in this cycle. Already sales are plateauing, and General Motors announced a few days ago it was ditching a decades-long tradition of reporting sales figures monthly.

Maybe there will be a final wave of heavily financed pickup trucks and SUVs — just in time for a big spike in gasoline prices.

And there’s any number of potential catalysts for that. Here’s just one: If Trump junks the Iran nuclear deal next month and renewed sanctions take a million barrels a day of Iranian oil off the global market, look out.

P.S. Just how profitable could spring earnings season be for you when it starts on Friday?

It’s totally possible… as Alan Knuckman explains in this interview.