What Will Victory in a Trade War Look Like?

“There’s out of the blue, and there’s, I guess, out of the dark, navy blue,” Trump economic adviser Larry Kudlow tells The New York Times.

When I saw the alert on my iPad yesterday afternoon, all I could think to myself was, This has to be about sticking it to the Chinese.

We need to rewind: The Trans-Pacific Partnership is one of those international “free trade” deals that’s anything but. It’s 5,554 pages of legalese carving out scads of favors for global special interests.

Actually it’s worse than that. As we documented way back in 2013, only five of the 29 chapters in the TPP draft agreement covered trade. The rest covered labor, the environment, agriculture, medicine, the internet, human rights, intellectual property rights… on and on.

There were provisions for draconian copyright enforcement. A neighborhood coffee shop offering free Wi-Fi could conceivably be made liable to some multinational entertainment giant if a customer downloaded a pirated movie.

And TPP allowed foreign corporations to challenge U.S. laws before private international tribunals. U.S. courts would have no authority to review the tribunals’ findings.

In other words, TPP was/is the ultimate in “globalist” projects — bringing together the United States with 11 other Pacific Rim nations, including Canada, Mexico, Australia, Japan and Singapore.

Naturally it was negotiated in secret. Heck, the text of the treaty draft was classified. Members of Congress had restricted access, although more than 600 corporate advisers had direct access on their computers.

In the summer of 2015, Rep. Paul Ryan justified the secrecy by saying, “It’s declassified and made public once it’s agreed to.” Of course the parallels to Nancy Pelosi’s infamous Obamacare remark (“We have to pass the bill so that you can find out what’s in it”) were too obvious.

During the 2016 campaign Trump railed against TPP, saying it was “pushed by special interests who want to rape our country.” Once he was elected, the writing was on the wall: Both Ryan, who’d become House speaker, and Senate Majority Leader Mitch McConnell scrapped plans to vote on TPP. What was the point? On Day 4 of his presidency, Trump signed an executive order making the withdrawal official.

So when Trump asked his top aides yesterday to look into joining TPP after all, it was indeed out of a “dark, navy blue.”

Overnight, Trump clarified on Twitter that he was interested only “if the deal were substantially better than the deal offered to Pres. Obama.”

But Trump Nation is understandably beside itself — for example, former Illinois Congressman and talk-radio host Joe Walsh…

Ah, but here’s the thing about TPP: Its globalist architects designed it as a big club — from which China was pointedly excluded. 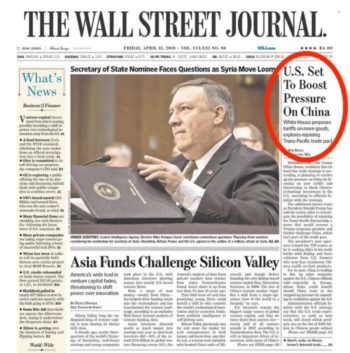 Rejoining TPP would be part of a strategy “focusing on new tariffs and threatening to block Chinese technology investment in the U.S.,” the paper reports, adding that the Trump White House is “confident that its hard-line strategy is succeeding.”

But what’s the endgame of that strategy? The president says, “Trade wars are good, and easy to win” — but what is victory supposed to look like?

As our Jim Rickards explained here last month, a Reagan administration official named Robert Lighthizer drove a hard bargain back then. Lighthizer “used high tariffs on automobile imports to force Japanese and German auto manufacturers to move their plants to the U.S.” The result was Toyotas built in Kentucky and Hondas built in Ohio.

Fast-forward three decades and Lighthizer is now U.S. trade representative in the Trump Cabinet. But the endgame isn’t the same this time.

So if Chinese investment in American high-tech is a nonstarter, how is the trade war to be “won”?

“There are only three solutions,” Jim Rickards told me in a recent email correspondence.

Conclusion: “No. 3 is the easiest and most likely because it does not require any changes in Chinese policy,” says Jim.

“They just move the order book for soybeans from Canada to Kansas. The U.S. trade deficit goes down (even if their deficit with Canada goes up; too bad).”

Of course, getting from here to there promises to be a messy and perhaps years-long process, with progress and setbacks along the way. But in just the six weeks since Trump began waging a trade war in earnest, Jim’s Project Prophesy readers have already been able to bag a 39% gain playing the trade war’s winners and losers.

There’s sure to be more where that came from. You can learn more about the methodology behind Jim’s Project Prophesy trades at this link.

Earnings season is off to a “meh” start: The Dow opened up 150 points, but as we write that’s turned to a 30-point loss.

The earnings numbers are fine. JPMorgan Chase, Citi and Wells Fargo all beat expectations. But the University of Michigan’s consumer-sentiment number is out this morning, and that missed expectations — by a lot. Indeed the figure slipped to a three-month low, which doesn’t bode well for consumer spending this month.

Too, the prospect of U.S. airstrikes on Syria hasn’t gone away completely. So that cloud still hangs over markets.

That said, we’re hearing buzz from Washington that one reason the missiles aren’t flying yet is a high volume of phone calls to the White House from people saying basically, “Don’t do it.” Makes sense: War-weariness is one of the things that got Trump elected.

Gold is staging a comeback from its drop yesterday and the day before, the bid back to $1,344.

Oil is rallying: At $67.39, a barrel of West Texas Intermediate just reached a milestone.

The last time crude was at this level was when it plummeting after a shock decision by OPEC: On Thanksgiving Day 2014, the ministers decided against cutting production even though oil prices had already slid 30% in four months.

AAA says the national average for a gallon of unleaded gasoline is $2.70 this morning — up from $2.53 a month ago and $2.41 a year ago. As a reminder, $2.75 is the pain point at which 20% of drivers say they’ll “change their driving habits or lifestyle,” according to AAA surveys. That too doesn’t bode well for consumer spending this month.

One of America’s leading drug warriors is crossing over, tentatively, to the other side… 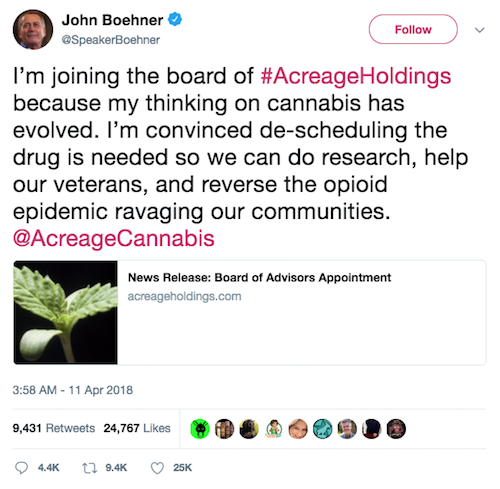 Former House Speaker John Boehner has mostly kept quiet since resigning from Congress in October 2015. He’s been advising one of D.C.’s major lobbying firms — no surprise there. And he joined the board of Reynolds American, the tobacco giant.

But his move into the wacky tobacky is turning heads. “Back in 2009,” our penny-pot stock authority Ray Blanco reminds us, “Boehner said that he was ‘unalterably opposed’ to legalizing marijuana. Now he’s publicly pushing for medical weed to become federally legal and lose its Schedule I drug status.

“That big about-face reflects the changing tide of sentiment surrounding pot in this country. A Gallup poll recently showed that the majority of Republicans now support legalizing pot in some way, shape or form.

“Federal legalization isn’t on the radar of many Americans at this point — they’re more focused on what’s happening at the state level. But it does have huge implications for the publicly traded companies in the pot space. So we’ll continue to monitor things closely.”

On the topic of homebuyers taking on a debt-to-income ratio of 45% or higher, a reader writes: “I’m a foreclosure specialist for a large credit union in North Carolina.

“I share office space with the underwriters. In just the last month I have heard them discuss a $200,000 loan on an 800-square-foot, two-bed, one-bath ranch up the Hudson River out the outer burbs of New York City. The single applicant had previously short sold a house, stuck the lender and then filed Chapter 7 — and she qualifies for a new mortgage. I didn’t hear how long ago that was, but the bankruptcy is still on the credit report.

“Another was a man who filed Chapter 7, five years ago and let three houses go back. Because they were not on his credit report, he qualified for close to a $250,000 mortgage.

“The funny thing is years ago the government changed bankruptcy reporting. The accounts used to just stop reporting as they were with all the slow-pay history, charge-offs and such. Now, once discharged, it wipes your credit clean as a whistle. One month you’re as bad as the rottenest apple with a 517 FICO. A month later you’re 690 with a bankruptcy footnote at the top of your credit report and Capital One is offering you a credit card. God Bless the USA.”

“I have given you a lot of money for Alan Knuckman’s picks,” a reader writes. “Now my inbox overflows with solicitations for his new service.

“I feel you should be giving more of these picks to the old service if they really are anywhere close to as good as promised.

“Basically the old service gives one pick on Monday morning — if you find more you think are good, why not share?”

The 5: The two services are apples and oranges, although Alan uses a similar methodology to select the options trades.

Weekly Wealth Alert features trades with a very short time horizon. Alan recommends the trades on a Monday morning, as you point out, and the options expire in as little as 10 trading days.

The 42-Day Retirement Plan features trades that are keyed to the 42-day earnings season each quarter. Here the trades typically take longer to play out — up to three months.

Hope that clarifies the difference between the two services. Yes, the track record on the closed trades in 42-Day Retirement Plan has been flawless, and thus the batting average in Weekly Wealth Alert hasn’t been as strong. But rest assured Alan is always looking for ways to refine how he screens those shorter-term trades to achieve better results.

P.S. Actually, Monday’s recommendation in Weekly Wealth Alert is darn near textbook: Within 24 hours, it was up 50%. Alan recommended selling half the position and letting the rest ride.

This morning he recommended selling the other half. Once that order is filled, perhaps today, perhaps sometimes next week, it should be a clean double — or very near.

Alan’s next trade recommendation is due on Monday. How much profit potential could you be looking at? See here.