Volatility Ahead (Not a Bad Thing)

“Worries are building,” the article continues… and that sounds ominous.

“As the current bull market gets within spitting distance of being the longest in history,” investors simply don’t know what to do with market volatility. 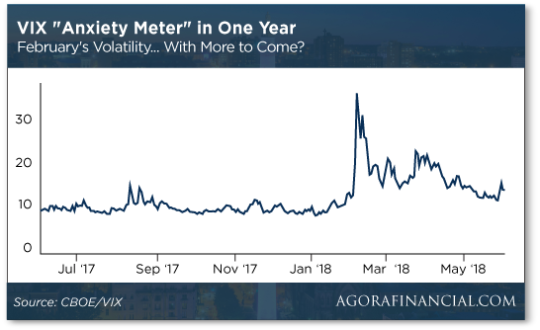 As we reported then, February’s VIX number topped out at 46 and floated back into the 20s by end of day. That was the highest it’d been in two and a half years. Historically speaking, 45 is the “oh, sh*t” number.

To provide some context for the spike, since the CBOE VIX Index started in 1993, there’ve only been six times when it closed higher than 45:

After the spike, the market settled down, “as it did after similar roller coaster rides in the first half of this decade,” says the FT, “except for one difference.”

Whereas once a certain degree of market volatility — roughly 10% — was acceptable, investors started to panic at the slightest movement.

“The changing market structure has made it harder for investors to distinguish ‘noise’ from ‘signal’ whenever markets tumble.”

And “whether markets have indeed overreacted or have simply absorbed new information only becomes clear in hindsight.”

As for volatility: “What was once a friend has turned into a foe.”

It stands to reason, then, that “most mainstream investors are not geared up to… catch a bubble before it bursts.”

Zach Scheidt, editor at Income on Demand, takes a contrarian view on volatility: “It’s an environment that I love as an investor.”

As for the current environment: “Stocks are swinging from positive to negative,” he says, “and back to positive again as investors digest the news and try to position themselves to profit.”

“With so many catalysts driving stocks higher and lower… there’s a window opening that gives us more income for each opportunity that we take advantage of,” Zach says.

“During specific periods,” he says, “we’re able to collect double our normal instant income payments thanks to higher market volatility.

Don’t tune out when you hear the word options. They’re actually easier to jump into than you think. “These are simply financial contracts that trade on special exchanges just like stocks,” Zack says.

“If you know how to use options correctly, you can make a lot of money in a very reliable way.”

And he wants to position his readers to take full advantage of the vagaries of the market… and this window of opportunity.

Executing these trades is far easier than you might think. See for yourself in this eye-opening demonstration before Zach issues his next recommendation tomorrow.

Headlines abound this morning, building up to the G-7 summit of the biggest industrial democracies in Quebec at the end of this week, “We will be divided — it will not be a G-7, it will be a G-6 plus one,” says France’s finance minister, Bruno Le Maire.

Don’t tell it to Wall Street. The Dow is up nearly 200 points as we write, adding to Friday’s gains. Curiously, the Russell 2000 — made up of small-cap stocks less vulnerable to global trade concerns — is pancake-flat.

“The action we’re seeing right now proves that the bulls still have plenty of fight left in them,” says chart-watcher Greg Guenthner. “Stocks are fighting higher in the face of an endless barrage of political tripe.”

Greg has his eye on biotech in particular right now. “The iShares Nasdaq Biotechnology ETF (NASDAQ: IBB) is finally getting its act together. The big biotech ETF climbed back above its 200-day moving average last week for the first time since late March. After an almost disastrous breakdown, IBB is back in positive territory for the year.

“But the real action is happening among the smaller biotech names. The SPDR S&P Biotech ETF (NYSE: XBI) has quietly rallied off its April lows. Now it’s just a few cents shy of a breakout to new all-time highs.”

Gold begins a new week still stuck below $1,300. Crude has resumed its slide, a barrel of West Texas Intermediate now just under $65 for the first time since mid-April.

War on Cash update: Australia’s government has announced it will ban the use of cash for any transaction over AU$10,000 — about $7,500 in U.S. currency.

The ban kicks in July 1 of next year. The government says it’s “encouraging the transition to digital society,” but leaders are also making no bones that they’re scraping for more revenue — about AU$3 billion over the next four years. One of the biggest targets, we’re told, is the bootleg tobacco trade — by some accounts Australia’s cigarette taxes are the highest in the world.

It was our Jim Rickards who brought this item to our attention. “I keep reporting on this because cash will be abolished before you know it,” he cautions. “Only awareness of this gradual abolition can save you. The best escape is to go back to the future with physical gold or silver.”

Stupid federal regulator tricks: A craft brewery in San Francisco is under orders to stop selling a cannabis-infused beer. But not for the reasons you’d suspect.

Black Hammer Brewing in the South of Market neighborhood introduced its “Toke Back Mountain” IPA earlier this spring (on 4/20, of course). It’s brewed with the hemp-derived compound cannabidiol, or CBD. There’s no THC, so it doesn’t make you high.

No matter, the federal Alcohol and Tobacco Tax and Trade Bureau has ordered Black Hammer to cease all production. 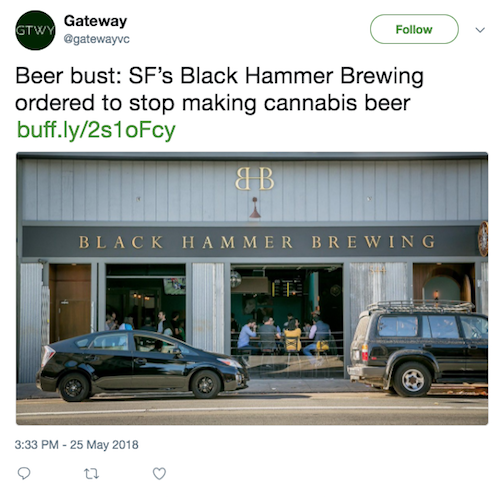 “It’s not because of any federal laws around cannabis,” explains the San Francisco Chronicle. “Rather, it’s because the bureau requires special approval for any nonstandard beer ingredients. Plenty of materials that are food-safe aren’t on that list, so breweries will often apply for special approval of their formula when they want to use one.”

“Standard” versus “nonstandard” is a purely arbitrary thing. Rose hips are fine, but rosewater isn’t. Hemp? Nonstandard, all the way.

Owner Jim Furman has applied to standardize hemp. But in the meantime, he can only sell his existing inventory; he can’t brew any new quantities. “Our guests love the CBD beers, and we’re pretty sad that we have to stop producing them.”

“I am 73 and started taking Social Security as soon as I could,” a reader writes as we begin a new week on the topic. “I do not trust the government in any way, shape or form.”

In contrast, another writes, “My father, who passed away at age 97 years and 10 months, told me when he was 90 that he had one regret in life. It was that he took his Social Security at age 62. ‘I never believed I would live this longm and that choice cost me a lot of money!’”

On a related topic, “Having just read the umpteenth comment about ‘means testing’ and the passive acceptance of its inevitability, I continue to shake my head in disbelief,” a reader writes.

“A majority of Americans will eventually be receiving these benefits. Last I checked, the majority rules. If the majority rolls over and plays dead, then of course Social Security will soon be means tested. But if we politely remind our representatives that heads will roll if they consider such a move, perhaps we can expect a different outcome.”

The 5: “Majorities” aside, we too would be shocked if the next round of Social Security reform entailed means testing. Telling someone who’s 65 and expects to retire in two years that her benefits will be dramatically lower because she happens to be “rich,” however that’s defined, is a nonstarter. Plus, official Washington is still wrapped up in the pretense that Social Security is a social insurance program and not a wealth-transfer program.

Far more likely, however, is eliminating the cap on income that’s subject to the FICA tax — which this year is $128,400.

And don’t forget the most obvious fix of raising the retirement age.

How might that affect you? The 1983 Social Security reforms maintained 65 as “full retirement age” for anyone born before 1938 — in other words, anyone over the age of 45 at the time the reforms became law. Under 45, the rules got changed on you.

While life expectancy has fallen slightly in recent years, it’s still nearly four years more now than it was in 1983. Perhaps the next round of reforms will move the goalposts if you’re younger than 50.

“Using 1776 as the start of the American ‘empire’ is flawed,” a reader writes after we introduced the thesis of the late Sir John Glubb that a typical empire lasts for roughly 250 years. (Starting at 1776 puts the United States very close to that mark now.)

“The British burned the White House in 1812, and we know when the Civil War was. America was hardly extending itself overseas to any great extent.

“An argument could be made the American empire didn’t really get going until late in the 19th century.

“This was the time of Adm. Peary — plus, the Americans put down the Spanish empire.”

The 5: Point taken. A credible case can be made that the United States didn’t cross from republic into empire until sometime in the quarter-century encompassing the annexation of Hawaii, the Spanish-American War and U.S. involvement in World War I.

That would effectively buy Washington another 125–150 years in which to lord it over the rest of the world. And who knows, it might work out that way.

But over the weekend we heard another compelling case that time is almost up.

Talk radio host John Batchelor now has a regular weekly spot with Johns Hopkins historian Michael Vlahos, discussing the prospect of a “new civil war.” In their most recent discussion, Vlahos drew an explicit parallel between Labour’s shock victory in the British elections of July 1945 and Trump’s shock victory in November 2016.

With V-E Day only two months in the past, Britain’s “deplorables” decided the time had finally come to toss out the Tories who’d spent decades enriching themselves via empire, with few of the benefits accruing to everyday Britons.

OK, the analogy is imperfect — as all historical analogies are. But within two or three years of that election, Britain’s overseas empire was mostly dissolved; the “crown jewel” of India was given its independence. “Global leadership” passed to the United States… and the British pound surrendered its claim as the world’s reserve currency to the dollar.

On Friday morning, most of them were filled on sell orders for Intel call options (75% gains) and Twitter call options (50% gains in just over a week).

“Better still,” says Alan, “with these two trades, we’ve booked our 10th winner (out of 13 total closed trades) in the last two months.”

How does he do it? And how can you get in on the action? Alan shows you how his system works when you click here.