A “Sure Loser” Stock Becomes a Huge Winner

At the time, it looked like one of the stupidest trades in years, maybe decades. It ended up making 52% gains in less than six weeks.

At the time, it appeared BP had nowhere to go but down — because of what happened two months earlier. 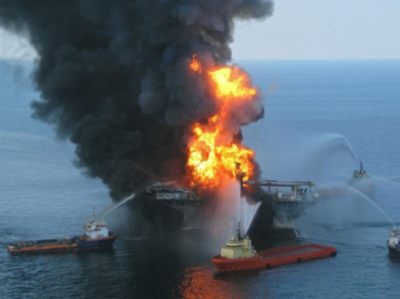 An explosion ripped through BP’s offshore oil rig Deepwater Horizon about 40 miles off the coast of Louisiana. Eleven workers were killed. The resulting oil spill was the biggest in history. Between the cleanup and the lawsuits, there was strong reason to believe the company wouldn’t survive.

“Up until then, BP was having a fantastic first quarter of 2010,” our Alan Knuckman recalls. “The company grew revenues to $73 billion and earnings to $6 billion — a 33% increase in earnings from the previous quarter.

“But after the disaster, none of that mattered.”

At that moment in late June, when conventional wisdom said BP was circling the bowl, it was time to buy.

“BP’s price had fallen largely because of psychology,” Alan explains. “Yes, the disaster was going to cost the company dearly. But it wasn’t so bad that the company should lose half its value. The drop was too far, too fast.

“By the end of June, people had reached their peak of hatred toward the company and couldn’t hate it more. That’s when the company’s fundamentals re-asserted themselves and savvy investors realized BP would likely bounce back.”

“While this is an extreme example, similar stories happen to thousands of stocks around the world every single day,” Alan goes on.

“At some point, traders who want the stock price to continue its decline are unable to keep scaring off potential buyers of the stock.

“This is when a stock can go from being a hated company to the best-performing stock. Traders who recognize this are poised to profit immensely as the laggards become the leaders.” (Alan has some even more powerful examples when you click here.)

But how can you identify the moment when a hated stock is about to make that vertical move?

To illustrate, Alan draws on an outdoors analogy…

Same deal with these vertical moves: “For a stock to move straight up, you need a hated company, a shortage of sellers and a near-term catalyst.”

With his quarter-century of trading experience, Alan has developed an indicator to spot all three factors at once. He plots those three factors on a chart… and when they converge, it’s go time.

Alan’s eager to share the fruits of his research with you… and show you how to pocket those huge, fast gains. Just hit the play button to get started… 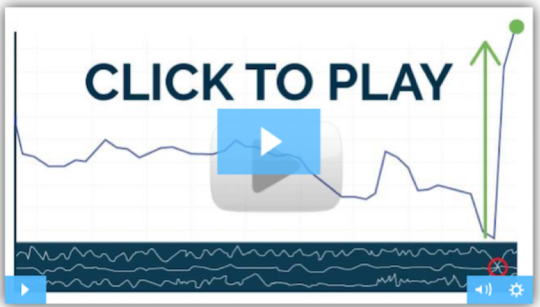 To the markets… which are in “risk-off” mode as the trade wars get cranked up again.

This morning, the White House declared a new 25% tariff on $50 billion worth of Chinese imports. Less than an hour later, the Chinese Commerce Ministry said it would impose tariffs against U.S. goods on the same scale.

With that, the Dow is down 240 points as we write — nearly 1%. And it does appear to be a reaction to the tariffs. The Russell 2000 — made up of small-cap stocks less exposed to global trade — is down only about a third of a percent.

For no obvious reason, gold got crushed the instant the Comex opened this morning. At $1,278, the bid is the lowest it’s been all year. Crude is taking an even bigger hit, a barrel of West Texas Intermediate shedding more than $2, now back below $65. The only thing that’s rallying? Treasuries — the 10-year yield rests at 2.91%.

Meanwhile, studies are starting to pour in, estimating the number of jobs that might be lost as “collateral damage” from the trade wars.

Now a consulting firm called the Trade Partnership is estimating for each job saved, five will be lost. That translates to 146,000 Americans losing their jobs. Here’s how it breaks down in some of the economy’s biggest sectors… 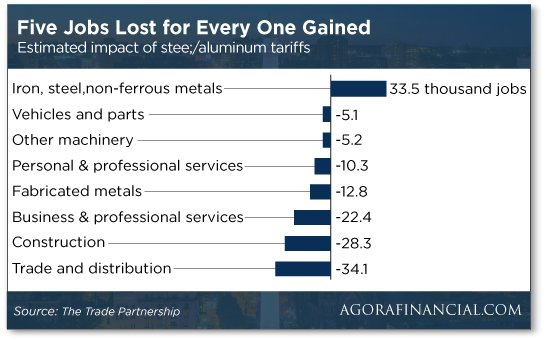 Oh, and those numbers assumed Canada and Mexico would be exempt from the tariffs. Turns out they’re not.

Meanwhile, a separate study of the White House’s proposed tariffs on imported cars and auto parts forecasts a loss of 195,000 jobs over the next three years. That’s according to the Peterson Institute for International Economics.

Does Federal Reserve Chairman Jay Powell like to see himself on TV? Or is he subtly signaling a faster pace of interest rate increases?

As you might recall, then-chairman Ben Bernanke started holding periodic press conferences in 2011. By mid-2012, he settled into a predictable rhythm: The Fed’s Open Market Committee meets eight times a year, and he’d speak after four of those meetings — in March, June, September and December. Janet Yellen and now Powell have kept up that pace.

Before long, another pattern emerged: The FOMC would make big decisions only at the meetings followed by a press conference — “live” meetings, in Fed parlance. All seven increases in the fed funds during the current rate-raising cycle have come at live meetings.

After this week’s meeting (and rate increase and press conference), Powell announced starting next January he’s going to speak after every meeting.

Seems some of the Fed pooh-bahs feared they were getting too predictable. “Internal pressure for adjusting this expectation was building,” writes policy analyst Tate Lacey from the Cato Institute.

“There were two options available that could convince the public and markets that policy rates could change at any meeting: One, the Fed could adjust rates at a meeting without a press conference or two, every FOMC meeting could be followed by a press conference. Chair Powell chose the second option.”

Hmmm… For a couple of years now, we’ve said the Fed is hoping against hope that it can raise rates to a high enough level that it can lower them again to fight the next recession. Could we be looking at more than four increases a year now?

AT&T’s takeover of Time Warner was finalized last night… and it’s just one reason Zach Scheidt calls 2018 the “year of the takeover deal.”

Zach believes a federal court’s approval of the mammoth communications merger will lead to more of the same.

“First, [it] creates an environment where small companies are now under pressure to compete.

“As big companies buy out competitors,” says Zach, “they are able to cut costs and offer products to customers at cheaper prices.”

It’ll be increasingly difficult for small companies to compete with the larger, because they don’t have the ability to scale production and at the same time lower costs.

“And so there’s a necessity for small businesses to combine forces to be able to cut costs and continue growing their business,” Zach says.

“This gives big companies much more incentive to buy up smaller rivals, knowing that they’re much less likely to run into legal or regulatory issues,” Zach says.

And with small companies having every reason to merge with larger competitors and fewer legal roadblocks for takeovers, “we can expect many more profitable deals to be announced” through the second half of 2018.

“What other American coin can command historical and numismatic respect of that magnitude?” said Eric P. Newman in 1975.

Newman — one of the foremost numismatic scholars of all time — was commenting on the singular 1792 Washington President gold eagle he acquired in 1942; it remained a favorite of Newman’s collection until his death last year.

Newman believed the “coin was struck as a pattern (a proposed coin) for a gold eagle, or $10 piece, and was expressly struck for, presented to and carried by George Washington,” according to CoinNews. 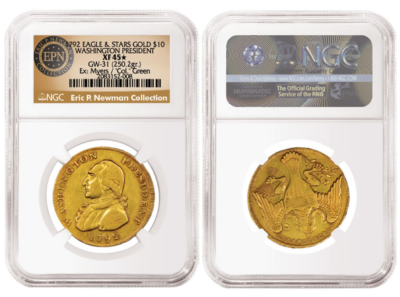 “Further research indicates that this coin was produced in America by Jacob Perkins of Newburyport, Massachusetts,” CoinNews continues, “rather than in England as previously believed.”

Washington carried the 1792 coin as a “pocket piece” and it was never circulated as money. It’s believed to have been presented to Washington as plans were being drawn for the first U.S. Mint.

The exceedingly rare coin will be auctioned in August at the ANA World’s Fair of Money in Philadelphia. With no reserve, the coin is expected to sell for more than $1 million, with all proceeds going to charity.

[Historical aside: Washington blanched at the thought of his image on a coin that would circulate as money — “monarchical” he called it.

The U.S. Mint took that principle to heart long after Washington’s death. Indeed, no president appeared on U.S coinage until the Lincoln penny came along in 1909. The Washington quarter we all carry around was first minted in 1932 to mark the bicentennial of his birth.]

On the subject of “universal basic income” possibly replacing Social Security, a reader is skeptical.

“Charles Murray proposed, ‘The UBI is to be financed by getting rid of Social Security, Medicare, Medicaid, food stamps, Supplemental Security Income, housing subsidies, welfare for single women and every other kind of welfare and social-services program, as well as agricultural subsidies and corporate welfare.’

“I can’t see corporations or Big Agra giving up their place at the trough. Hence, UBI as described above will never happen.”

The 5: Probably not. We were just putting it out there to illustrate how public policy elites, even on the “right” side of the political spectrum, envision UBI as supplanting Social Security — among other things.

Besides, we suspect Murray is just pulling numbers out of his posterior. In that 2016 Wall Street Journal article we cited, he proposed a $13,000 annual payment to every citizen 21 and older.

So we’re talking about 239 million people who’d be collecting a total of $3.1 trillion.

The entire 2018 federal budget is $4.1 trillion. Military spending — once you include things like veteran health care, Homeland Security and the Department of Energy’s nuke sites — is $1 trillion, give or take.

So UBI proposed by Murray plus military spending eats up the entire $4.1 trillion right there — before any other government functions or interest on the national debt.

Yeah, pull the other one.

P.S. This week, Alan Knuckman released his new trading strategy that homes in on stocks before they “go vertical” on a chart. We’re talking turning a scant $250 into more than 10 grand in a matter of days.

If you want to juice the gains Alan sees coming in the stock market between now and July 4, follow this link and he’ll show you how.