“The oil and gas sector of the stock market is very depressed,” says Jim Rickards.

That might surprise you in light of the run-up in the oil price this year. Crude is flourishing.

Not so much oil — and gas — stocks, however. “Many of these… trade at enormous discounts to their intrinsic values,” says Jim.

Welcome to a special episode of The 5. With Independence Day behind us, it’s time for several of our editors to roll out their forecasts for the second half of 2018. And we start with some uncommon wisdom about the energy sector.

The cheapest oil and gas stocks? They’re in the offshore drilling and exploration segment of the energy sector. It’s gone relatively unloved when compared with sexier technology stocks.

Because investors have largely ignored this niche, “oil companies like Shell and Chevron have slashed capital budgets for offshore exploration and production.”

Reduced budgets — “the lifeblood of… offshore-focused companies” — equal revenues and earnings that miss the mark of historic peaks.

And “offshore stocks are now priced at levels that assume business will never return to prior peak levels.

“But offshore activity must eventually revert to peak levels if the global economy continues consuming oil and gas at current levels,” Jim continues.

“That’s because a significant portion of global energy production comes from offshore projects.”

And if offshore production doesn’t return to previous volumes, shortages will follow.

“At the same time, we expect inflation to rise in the years ahead as central banks and governments debase currencies to ease debt burdens,” Jim notes.

Inflation means commodity prices across the board will rise, only adding to the “supply and demand pressures for crude.

“If oil prices remain high or continue to rise,” as Jim expects they will, “oil companies will rebuild capital budgets for offshore oil and gas exploration.”

Jim expects oil stocks “to rally sharply early in the offshore drilling recovery cycle, long before its earnings recover,” leading to an “inevitable earnings surge in 2019 and beyond.”

Income and retirement specialist Mike Burnick agrees with Jim: “I believe that investors will need to contend with inflation in the very near future,” he says, “to the point that it will far, far exceed the Fed’s 2% inflation target.

“As you no doubt know,” Mike continues, “some of the most profitable assets to own as inflation picks up are precious metals.”

“It’s a pretty simple equation. Countries around the world are deeply in debt.” 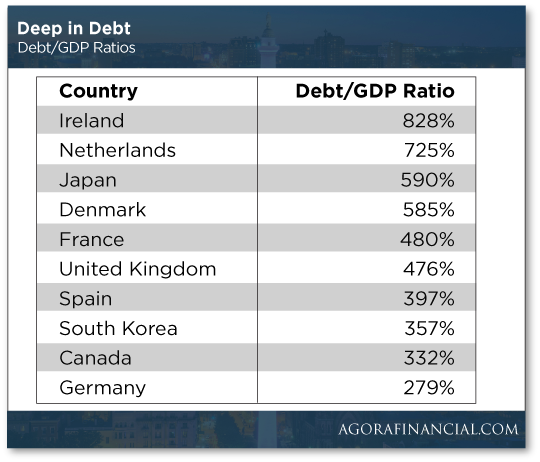 “Precious metals, of course, are the anti-fiat currency,” says Mike. “They can’t be manipulated, debased and cranked out from a government printing press.”

Mike’s favorite income-producing precious metal play is a royalty trust whose business is split 50/50 between gold and silver.

A royalty trust is a company created to own — in this case — mining rights and to disburse income from the sale of assets to shareholders. “For income-focused investors, royalty companies are absolutely the way to invest in precious metals,” Mike says.

Generally, these companies provide “a fixed amount of upfront funding to miners in exchange for the rights to purchase [precious metals]… at a predetermined, below-market price.

Better yet — and this is incredible — this company’s workforce is tiny — just 30 employees who churned out $25.8 million… per worker!

Plus, this dynamic royalty trust has a unique structure for paying back shareholders; instead of a regular dividend each quarter, it “pays out a dividend based as a percentage of cash flow, which creates a fluctuating dividend stream.” As the price of silver and gold increases, so will dividends.

If you want access to all of Mike’s favorite income-generating picks, give this a look.

To the markets, where oil’s slightly down because crude inventories rose by 1.2 million barrels last week.

This number’s in stark contrast to analysts’ expectations that U.S. stockpiles would fall by 3.5 million barrels.

Last Thursday, “Oil… traded near its highest in 3½ years,” says CNBC, “boosted by potential disruptions to flows from Iran and the Middle East.”

This “despite a fresh demand from U.S. President Donald Trump that OPEC cut prices.” Oh, and increase production by 2 million barrels per day, as we reported Tuesday.

The Bloomberg Consumer Comfort Index was released this morning.

“The gains suggest that tariffs and talk of trade wars are having no significant effect on the U.S. consumer,” says Bloomberg.

Along those lines: Our income expert Zach Scheidt says, “I think… fears are well overblown and we can use [any] panic to buy into a great dividend-payer at a bargain price.”

Zach keys in on one industry dinged by trade-war drama: the auto industry.

“Every country wants to sell its cars, trucks and SUVs to other countries. But every country would also prefer its citizens buy from local manufacturers.”

For that reason, tariffs have always been levied against foreign imports — in the U.S. and abroad.

“Basically, the tit-for-tat trade agreements that have been structured over the last several decades have resulted in a giant tangled mess of trade restrictions.

“But now, through some hardball negotiations, it looks like we have a chance at actually reducing the amount of trade restrictions in play and coming up with a fairer playing field,” Zach says.

“A few weeks back,” he continues, “leading German automakers sent a proposal to Washington that would effectively scrap the European Union’s 10% tax on auto imports to the United States in exchange for the Trump administration abandoning a proposed 25% border tax on European imports.”

Tax relief should have an enormous impact on U.S. automakers, Zach believes, especially for one of the biggest dividend-generating stocks that’s trading at just 7.7 times next year’s expected earnings. So the stock “is cheap and has plenty of room to trade higher.”

For a company that already pays out a generous 5.1% dividend to investors, Zach anticipates it’ll “boost its dividend, giving us even more ‘bang’ for our buck!”

Act before the MSM catch on… remember, once they scream “buy,” all bets are off. To learn about this dividend-generating powerhouse — and more — follow the link to Zach’s Lifetime Income Report.

“Wireless communications are about to go on steroids,” says our technology maven Ray Blanco, “thanks to the biggest tech upgrade in history.”

But do you know what it does? “It will bring 100 times more bandwidth and a tenfold decrease in delays due to your wireless connection,” Ray says.

Ray’s been talking about the internet of things (IoT) for years now — and 5G internet speeds will make it all possible.

“New applications will include millions of new bandwidth-hungry cars — many, if not all, of which will eventually be capable of using wireless connectivity to safely ferry passengers from place to place.

“And that’s not to mention billions of other new [IoT] devices as well as machine-to-machine communications.

“All these connections are going to create an avalanche of data traffic,” says Ray. “High-quality streaming video, augmented reality, virtual reality, cloud applications and much more will put heavy demands on networks.”

Upgrades are going to be expensive… to the tune of $200 billion per year.

“5G will use new parts of the wireless spectrum,” says Ray. “These frequencies will require carriers to build out thousands of new locations in order to ensure high-speed coverage, since they don’t have the range of existing technology.”

Ray has his eye on one company that has a 17% market share in the parts needed to upgrade the system to 5G and provide cheap bandwidth.

This relatively small company is giving big-shot companies like Nokia and Huawei a run for their money. “Moreover,” Ray continues, “the company is constantly improving its products.

“Its road map of future solutions includes devices that will deliver several times the capacity at a fraction of the energy use of what it was offering just five years ago,” says Ray.

And it already has a relationship with big telecoms like Sprint and T-Mobile — two industry giants that want to merge. Altogether, this company’s “in a strong position to benefit from the billions in upgrade spending.

“The United States and the world are on the cusp of 5G,” says Ray. “It will be huge and transformational.

“It will also require many billions in investment.”

Ray’s tech play in wireless solutions is not your typical way to invest in technology. While the crowd piles into FAANG stocks — where there’s not a lot of room for growth — Ray keeps up with under-the-radar companies that are poised to take off.

From the land Down Under: “A homeowner got the surprise of a lifetime when he discovered a gold mine in his back garden,” says an article at the Mirror.

“But it wasn’t until he went wandering around his… land that he made the startling find,” the Mirror says. “It turns out the estate… is home to a number of… mines.” 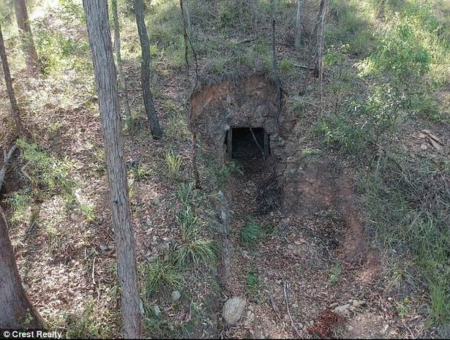 “We weren’t told about it,” Mr. Doolin says, “we just found it there one day.

“There was a lot of mining at the turn of the century,” he continues, “and in those hills there are quite a few little mines.”

So… Doolin did what anyone would do after stumbling upon a gold mine — he put his property on the market, asking $1.65 million.

Alas, the appeal of a gold mine isn’t what it used to be… Mr. Doolin settled for the price he originally paid for the property.

“Thank you for shining light on the BS that gets regurgitated by the mainstream media,” a reader says.

“Two cases you outlined are the narratives on the ‘Amazon effect’ and the ‘bank stress tests.’

“I am still irritated at the whole pile of garbage that was fed to people leading up to the Iraq War. (I was under the impression that only Congress could declare war. Something to do with a Constitution.)

“Keep up the good work and keep challenging people to use their gray matter and not lap up the slop that is being offered.”

P.S. As you might remember — if only because we kept reminding you! — Tim Sykes created a sensation last week when he took the wraps off his weekend trading strategy.

Tens of thousands of people watched his presentation… learning how to apply the strategy to buy on Friday, sell on Monday and bag a quick gain. Those who acted on his first recommendation pulled in 10%. Imagine doing that every week — and you don’t have to do any fancy options trades, either. Just have a plain old brokerage account.

Our charter subscriber offer is now closed… but you can still secure a great deal on this new premium advisory if you follow this link. You’ll want to do so right now… because Tim’s next weekend trade recommendation comes out tomorrow.